April 26: Amongst the cardinal genres of art; still life, landscape, portrait, the nude is the most artificial and contested. For two photographers whose work is being exhibited currently, Zbigniew Dłubak and Jocelyn Lee, this subject matter serves divergent lines of investigation.

Photographer Zbigniew Dłubak was born on this date in 1921 and his ground-breaking contribution to Polish art and photography is currently showing in Zbigniew Dłubak – Heir of the avant-garde at the Fondation Henri Cartier-Bresson until Sunday.

In 1967, in Wspolczesna gallery in Poland, the Warsaw art crowd are lost in a labyrinth of wooden panels.  The breeze of a large fan makes the large prints pinned to each ripple and flutter, making it clear that these images of fragments of naked bodies are made of mere paper.

The installation came as a revelation after years of socialist realism and Cominform restrictions on art, which had only started to relax a decade before, releasing the avant-garde from its cage and giving wing to Polish surrealist conceptual wit characteristic of its irreverent posters and graphics of the era that is still recognised worldwide.

Dłubak’s installation Ikonosfera was, after 1948, the second time that he had influenced the direction of art and within it the standing of photography in his country. It was in December 1948 that he showed in Wystawa Sztuki Nowoczesnej (the “first exhibition of modern art”) which he organised with painter, assemblage artist, set designer and theatre director Tadeusz Kantor (1915-1990) in Krakow.

It was radical in including photographers amongst the exhibitors, given that it took place just as the dogma of socialist realism was made official, with the result that the exhibition was forced to close. Dłubak, in adherence to the principles of the “dialectical materialism of Marxism” proclaims that art is “a tractor that must be used for a work of positive and creative plowing,” but in fact displays much less prosaic; dreamlike abstractions titled from the poems of Pablo Neruda’s poem The Magellan Heart (above).

What are we to make of Dłubak’s dissecting of the female body and its faceless, anonymous representation; is it misogynist, an objectification or paternalistic colonisation of the subject?

His history indicates he has an informed conceptual purpose. After moving to Warsaw in 1934, through his reading of revolutionary literature he had became involved with socialist and communist youth organizations and was consequently expelled from school. He started to paint and draw, and purchased his first camera. At the outset of WW2 was studying the theory and history of art in Polish texts, especially on functionalism in art in the idea of ‘Unism‘ promulgated by the radical constructivist artist Władysław Strzemiński (1893–1952), as well as the provocative writings of Witkacy (Stanisław Ignacy Witkiewicz).

He used his camera in supporting the resistance and was arrested on the 10th day of the failed Warsaw uprising (August-October 1944) and deported to Auschwitz, then transferred to Camp Mauthausen in Austria where the Nazis assigned him to developing and retouching prints. He continued to draw in secret and organised a clandestine exhibition inside the camp with fellow internees; the Polish lyrical abstractionist painter Marian Bogusz (1920–1980) and the Czech sculptor Zbynek Sekal (1923–1998). 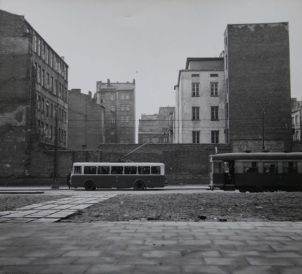 After his release in Prague he discovers Czech surrealism. Suffering from tuberculosis, Dłubak kept his camera with him in the sanatorium and used it to note ideas for paintings.

There followed a set of anti-aesthetic urban landscapes, and inspired by his own theories of existence, Dłubak next executed a series called Existences (1959-66); a deadpan documentation of his studio and living quarters;

Photography is in phase with the rhythm of life. It impatiently looks for new images. The more effigies it accumulates, the greater its appetite; it’s increasingly obsessive. Not only does it record but, subject to the imagination, it also creates new phenomena. It constantly takes us on new adventures, it shakes us up, and does not allow us to rest.

Photographing parts of the body of his wife Armelle was a logical continuation, and in Ikonosfera we see these interleaved with images from the Existences series. A commission to decorate a men’s clothing store in 1962 gave him an experience in making mural-scale prints which appear in the Ikonosfera installation, which was the first immersive exhibition of photography held in Poland.

His fragmentation of the body in Ikonosfera was an effort to dismantle the traditional opposition between abstraction and figuration by operating with a recognisable traditional subject.

I’m not interested in stylistic effects, whether they’re derived from modern art or conceptualism. I use shapes, ideas, colours, words, photographs and actions as my materials in a way that best suits my art, to create an empty sign in the context of the reality I live in.

The idea is further illuminated by Zbigniew Dłubak’s other, later series including Tautologies, whose idea was to juxtapose, in close proximity, photographs of certain elements of the PERMAFO Gallery space with those very elements, as fragments of the real location; Dłubak’s photographs stand as traces of an intervention in, and dialogue with, the space.

Continuing his idea of the dialogue are his series Desymbolisations from 1971 in which a sign language is represented, drawing on photographic reproductions of religious objects and paintings of renowned Polish masters – Jacek Malczewski, Jankiel Adler, Jan Matejko, Jozef Mehoffer – as starting points for his own works in which he emphasises the primarily ‘neutral’ nature of things which we later endow with meaning, and regard as symbolic.

Dłubak photographed Jewish tombstones featuring the motif of hands in the spread-fingered gesture of priestly blessing, juxtaposing these matzevot photographs with a series of images of hands, shown, in Desymbolisations, against a black background. In one of the photographs the fingers are spread in the same manner as in the Jewish blessing gesture, but in his sequence the gesture is not made – the hands do not bless;

The social role of art consists in introducing the factor of negation into the human consciousness, it challenges the rigidity of systems and conventions in the rendering of reality. Art itself is evolution, it’s the introduction of all new means of expression.

Consideration of his series Gesticulations reveals his interest in the semiotic (and specifically Claude Lévi-Strauss‘s) notion of the ‘floating’ signifier which “in itself [is] void of meaning and thus apt to receive any meaning”, possessing the “symbolic value zero” but allowing “symbolic thought to operate despite the contradiction inherent in it.”

Asked whether he so often depicted a woman’s body to make his imagery more ‘digestible’ for his audience, Dłubak replied;

No. I am interested in photography of many objects, especially in the last twenty years, objects that have a special symbolic meaning in culture, for example, a woman’s torso, a tree trunk … I am looking for such very common symbolically received objects.

The female torso has a special meaning not only in art, but in all human culture and on different layers. It is a carrier of many meanings, and not only for men. If I introduce it to my actions, I somehow take away this symbolic meaning and give it new ones. I introduce a different world of meanings. I am constantly interested in a certain mobility of meanings in relation to an object. I always want to find the essence of what is called meaning if it is subtracted from its substrate. [It is] something very fleeting.

Jocelyn Lee (2010) from the monograph Nowhere but here (Steidl).

The first UK solo exhibition of Italian-born American photographer, Jocelyn Lee (*1962) opened 19th April and will continue until 12th May at Huxley Parlour Gallery showcasing a selection of Lee’s portraits, landscapes and still life, including works from her latest series The Appearance of Things.

Lee enlists the female body in her depictions of the existential themes of sexuality, family, death and ageing. By contrast with Dłubak’s monochrome imagery, her colour prints provide the viewer with the stimulus to luxuriate, at a remove, in the sensations of water, foliage and fabrics, of liquid coolness and solar heat, against flesh.

The series The Appearance of Things, (2016 – ongoing), incorporate the nude into the still life, portrait and landscape genres, to represent female bodies engaged with the fluctuant environment, submerged in water or dappled in sunlight, or engaged with, and even entangled in, plant forms which we come to relate to the transition from birth, to blossoming and to death.

While these are age-old subjects of allegory in the western tradition, Lee avoids idealisation; these women both old and young retain their real appearance and do not conceal the changes that life has wrought on their bodies. Yet they remain astonishingly beautiful;

I want to expand the notion of the beautiful to include the more vulnerable stages of life, including adolescence, pregnancy, middle age, old age and illness. I am interested in embracing what others may see as physical imperfection or vulnerability, and documenting it with the eyes of a lover.

Indications of that vulnerability are various. On seeing July Burn of 2016, we cannot help but wince at the sunburn which the subject has suffered and which has imprinted on her body the signature of the bathing costume she wore the day before. We can read that as a sign of her cultural origin in a comfortable western society, and her unaccustomed nudity as an indication that this is an artificial situation, an amalgam of portrait and nude study, prompted by the presence of, and in response to, the photographer. Such artifice is evident in the way the hot pink of the subject’s skin resonates with the overblown roses in the background and those on the cloth on which she sits.

Jill and the Crashing Wave threatens to reprise the allegorical subject of a Renaissance Venus, but the older body of the subject forces that convention to retreat and to see in her frankly and fearlessly revealed aging skin, and her calmly resolute expression, an enduring beauty that prevails despite the tidal erosion of life. The initial confrontation is replaced with a contemplation, that both subject and photographer encourage, of the fragile physicality and idiosyncratic imperfection that we all share.

Whether it is sunburn, or the yielding sponginess of moss, the brittle scratching of dry twigs or the miraculous buoyancy to which we can entrust our bodies in water, through reference to the physical senses each of Lee’s images transcends mere surface appearance and the trite judgements we make of others’ bodies.

She does this by eliciting our fellow-feeling in an empathetic response to the situation in which each of the subjects is shown. Bodily sensation rather than voyeurism is invoked.