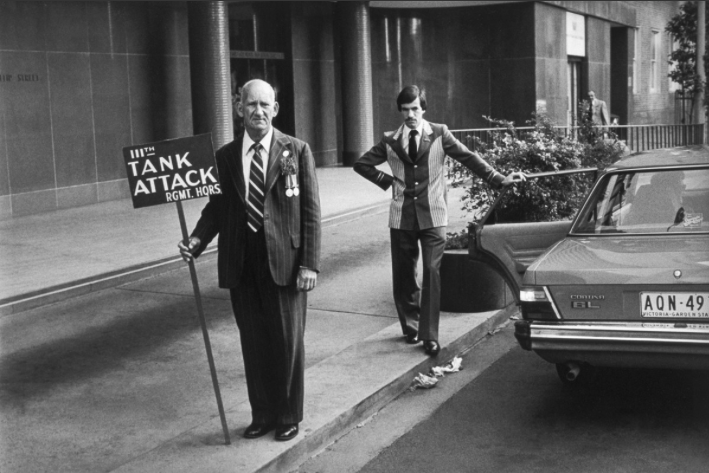 April 25: Photograph; lest we forget.

Soldiers climbed out as bullets started to strike the boats, some in full kit jumped into deep water and drowned, while others died or were wounded before even getting to shore. They were from the Australian and New Zealand Army Corp (ANZAC) newly formed in 1915 to carry out the orders of the British War Council. The beach became known as Anzac Cove, the site of Australia’s iconic war campaign. Where other countries celebrate a victory on veterans’ day, we commemorate a loss; the Allies retreated and Anzac Cove was evacuated in December 1915, after months of disastrous fighting.

No official photographers or war artists were sent with the landing forces, so the photographic record of the nine month Gallipoli campaign relies primarily on the images taken by soldiers, many of whom, despite orders prohibiting them, carried folding Kodaks.

The Kodak Vest Pocket ‘Autographic’  was marketed to soldiers as ‘the Soldier’s Kodak’ for 30 /-, and at Gallipoli they were very common with Australian forces, who were paid 5 shillings a day and could afford them. Kodak advertising urged; ‘Every soldier naturally wants to keep a lasting record of the brave part he and his own company is playing in the Great War – and he can do it well and easily with the little Vest Pocket Kodak’.

Being ‘Autographic’ meant that by loading the camera with special film that had a tiny bit of carbon paper placed between the film and the paper backing, you could make a notation about each shot as you took them; you simply unlatched the little window in the back and used the metal stylus stored on the camera body to write information – ‘metadata’ in fact – directly into the margins of the film, exposing the text by keeping the door open for a few seconds.

There was further encouragement of soldiers with cameras; newspapers were offering money for the best photographs – it was possible to win £1000 if your photograph was chosen to be enlarged and published. Photography of war action by soldiers has ever since been severely restricted.

Captain Harry Charles Davies went ashore with the 15th Battalion on 25 April 1915 and took the photograph below that is believed to be the first made during the landing. From a distance along the beach it shows the rows of empty landing craft and the disembarked soldiers arrayed along the dunes, preparing for the arrival of the next wave of troops. They are sheltering from a Turkish contingent of then 80 soldiers, soon to be reinforced, firing from a machine gun post at the top of the cliffs. By the time photograph was taken, it is estimated that 101 of his fellow soldiers had been killed. Davies was shot in the ankle during the charge from the 4th Brigade lines three days later and returned to Australia on 10 June 1915, where he had an authorised a patent attorney copyright this picture, possibly because of the incentives offered by newspapers for an authentic photograph.

In June 1908 Charles Bean had joined the Sydney Morning Herald as a reporter. By 1911  he was the Herald’s correspondent in London. After the declaration of war Bean was appointed official war correspondent to the Australian Imperial Force in September, a post to which he narrowly beat Keith Murdoch (Rupert’s father) in the Australian Journalists Association election (Murdoch arrived later at Gallipoli, in September 1915).

Commissioned at the rank of Captain in the A.I.F. he went ashore at Anzac Cove on the Gallipoli Peninsula at 9.20 am (some sources give 10 am) on 25 April 1915, a few hours behind the seaborne landing of the first troops, and he remained there for most of the campaign. Though not a press photographer, he took this photograph of the 1st Divisional headquarters staff coming ashore. By this time the Turkish machine gun on the cliffs had been silenced and fighting had moved to the second ridge, so these men were able to wade ashore in relative peace. His perspective gives some idea of the size of the British fleet that conveyed the thousands who fought at Gallipoli.

British correspondent Ellis Ashmead-Bartlett arrived also at this hour and his report of the landing (accompanied only with studio portraits of soldiers wounded, taken before they departed to Gallipoli) was published in Australian newspapers on 8 May, before the reports of C.E.W. Bean. He was controversial and, unlike the patriotic Bean, increasingly critical of the conduct of the Peninsula battle, though full of praise for the Anzacs. Returning to London in May, he brought back a movie camera and in partnership with the official Admiralty photographer Ernest Brooks, produced the only footage of Gallipoli, some made in the thick of action, including the shot below made only 30 yards from the enemy.

For many years I would assign my students a project to photograph at Anzac Day commemorations just as I had been asked to do by my lecturers. It was a great exercise in photographing (generally willing) people and building a story with your own perspective amongst the many other photographers, professionals, amateurs and other students.

Certainly my own angle, like that of my fellow Prahran College student Philip Quirk (above), was a rather cynical one; my own father had fought in New Guinea in WW2 and my mother had become a war widow after his premature death. He despised Anzac Day and the Returned Soldiers League and had thrown away his medals, though he never really said why. Early in the 1980s, most mature-age students took the same negative point of view; like me they had marched in protests against Australia’s involvement in the Vietnam War and against conscription, and saw Anzac Day as a perpetuation of the values that supported the crimes and carnage of war.

Recent generations of my students held a generally respectful and positive attitude, and building up to the Anzac centenary it was distressing to see an increasing jingoism emerge in their pictures.

That is where Australia stands now, with a population of young people few of whom, other than migrants from scenes of conflict, have any direct experience of war, and who would see a new one as an heroic adventure, like the smiling young men at the head of this post, about to land at Gallipoli. So easily do we forget!