June 20: Photographers in taking up the thematic genres of the still life, landscape or nude, are dicing with cliché, but it is into the portrait that the mundane so readily, and treacherously, creeps.

Two masters of the portrait who avoid such fate are associated with today’s date; Roland d’Ursel *1926 Belgium, Bruxelles who died on 20 June 2006, and Krzysztof Gieraltowski who presents Polnische Individualitäten (‘Polish Individualities’) at the Polnisches Institut Wien, Am Gestade 7, 1010 Wien, opening tonight at 7:00, and continuing until 22 September.

Polnische Individualitäten is a collection of portraits of of 44 well-known personalities from the fields of art, music, theatre, film, literature, science and politics by Polish photographer Krzysztof Gierałtowski ( *August 10, 1938 Warsaw, Poland), on which he worked for more than 30 years.

This subjective selection surveys the Polish intelligentsia in portraits which include poet, prose writer, translator and diplomat Czesław Miłosz (1911-2004), painter, assemblage artist, set designer and theatre director Tadeusz Kantor (1915-1990), singer and actress Kalina Jędrusik (1931-1991), composer and musician Witold Lutosławski (1913-1994); even the Polish Pope, John Paul II, who was Karol Wojtyła (1920-2005), is amongst those being shown.

The monochrome photographs are dated only with the subjects’ birth (and sometimes death), not the date made, on his website though there, and in the exhibition he adds an engaging commentary on their making, mainly in terms of the reactions of his subject rather than any technical or aesthetic insights. These are remarkably candid…

Of his portrait of Magdalena Abakanowicz he writes on the accompanying caption;

I made two portraits, one out of focus, the other even more blurred, on the negative. This was how I expressed my spontaneous protest against the convention of élite talk that the world-famous sculptress Magdalena Abakanowicz, was seeking to enforce.

These comments give insight into his own unconventional and defiant personality as do the clues in his subjects’ expression and pose.

What he does not explain his how his use of soft focus is a photographic translation of the sculptor’s celebrated transformation of burlap and sacking into three-dimensional human figures which are themselves ‘soft’ and abbreviated.

These are staged images in the sense of their theatricality, which is induced, it is clear, by Gieraltowski’s provocation. Never content with producing a conventional, flattering portrayal, or even one with which the subject will be happy, he wants to delve beneath the persona, which is in most cases a very public one well known to the receivers of these images.

This is not a new exhibition and has been shown multiple times, touring galleries and institutions in San Sebastian, Paris, Aachen, Hall, Prague, Vilnius, Krakow and Warsaw, but it is the work of a mature artist, now seventy-nine, whose imagery is representative of a classic period in which Polish design and poster art drew international attention, in the sixties and seventies. 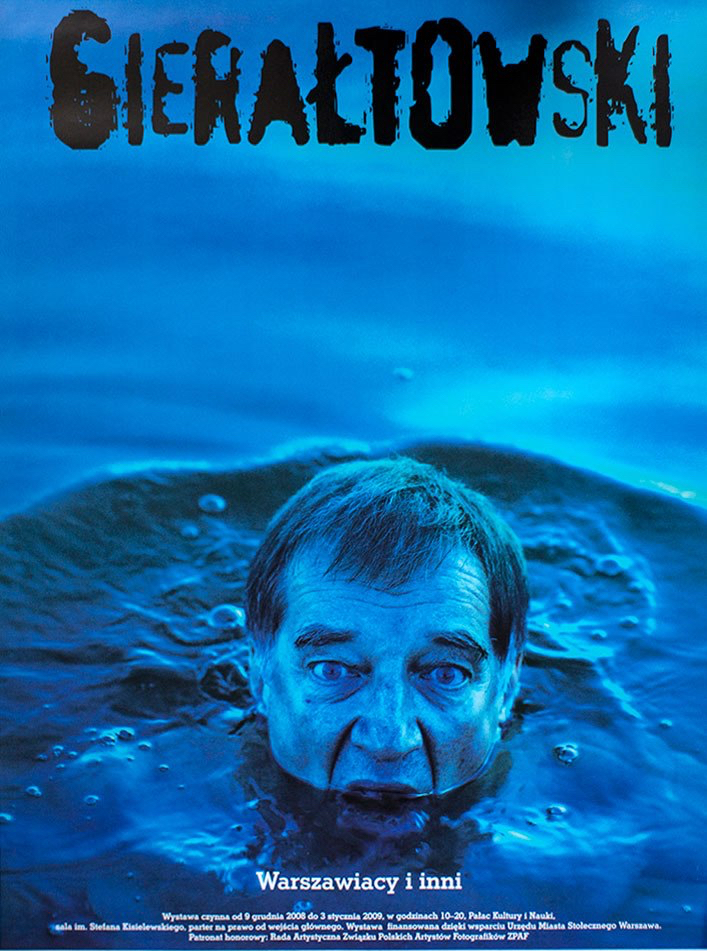 It is the the style of Polish poster and book illustration to which these photographs adhere; they are grainy and harshly contrasty, often dropping all detail from the blacks, but preserving nuances of skin texture where it is important.

The photographer is undaunted by bare whites, such as the white of Kantor’s collar and part of the background, and extremes of manipulation in printing, as in the obvious dodging of the eye in the graphic and tightly cropped portrait (above). 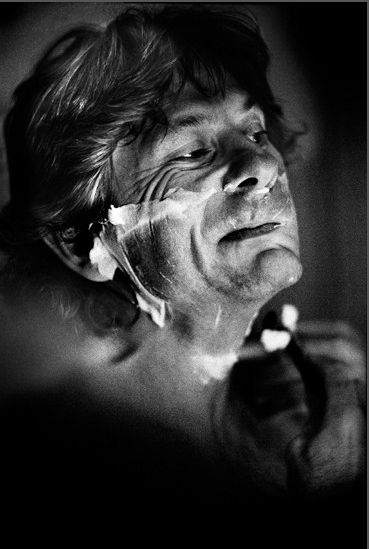 In its striking graphic qualities, Gieraltowski’s style has much in common with fashion and portrait photography of this period in the West, reminiscent of David Bailey and Bill Brandt, though which way the influence actually flowed is now moot.

The series was released in 1998 as Krzysztof Gierałtowski: Portrety [‘Krzysztof Gierałtowski: Portraits’] and a movie Polacy, Polacy, released by Polish mainstream television channel TVP2 and directed by Borys Lankosz, shows Gierałtowski working on his portraits of poet and essayist Wisława Szymborska, sci-fi writer Stanisław Lem, and composer/conductor Krzysztof Penderecki. For each subject, he seeks some innovation that will highlight their personality.

The approach is experimental; Gierałtowski uses the wide angle lens to distort faces at close range for example and he will use angles of view that further exaggerate and even caricature the subject.

Props are an integral part of many shots, sometimes suggested by the subject who so often wholeheartedly takes up their role in this pantomime of portrayal at Gierałtowski’s prompting.

It is an expressionist attitude that is found in so much middle European and Communist bloc art and design of this period, intransigent, open-minded, and unruly, characteristic of a personality like Gierałtowski’s who says of his work:

My photographs of people stem from curiosity and a need to play, to interact with the famous people of today. My portraits are very subjective, I try to choose one trait of my models and build upon it, visualise it. I photograph everyone in the way that I see fit. I’m always questioning my choice of people, their photos and opinions that I have of them.

The exhibition is accompanied by a four-language catalogue published by Muzeum Narodowe in Gdansk.

For comparison is Roland d’Ursel (1926-2006), who became a professional photographer in 1947. From 1948 to 1952 he produced a series of artists’ portraits, after sculptor and furniture designer Madam Nadine Effront provided him introductions to the most famous artists of that period in Belgium and France, among whom were René Magritte and Paul Delvaux. 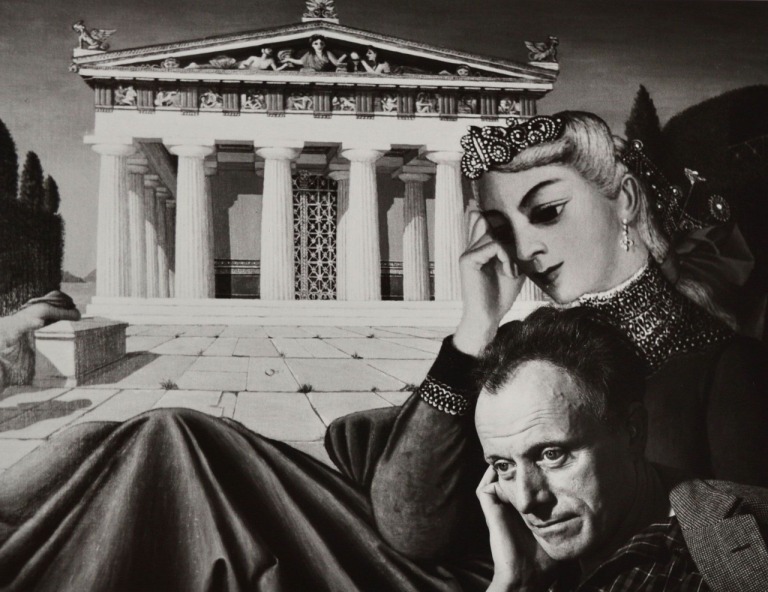 His approach is more cerebral, even didactic, than expressionist, and relies often on the artist imitating their work and even being made part of it as in the case of Delvaux, above, or on showing the art itself seeming to react to the artist, as does the nude in the Magritte.

One of his more radical works shows Boris Vian, who is best known (at least in France if nowhere else) for his novel L’Écume des Jours on which is based Michel Gondry’s rather more saccharine Mood Indigo. Vian’s novel is surrealist, typified by its phrase Sous les pavés, la plage! (“Under the cobblestones, the beach!”), adopted as a slogan by the protesting students as they ripped up the street paving for ammunition to throw at police in May 1968.

In d’Ursel’s portrait Vian appropriately becomes a Chagall-esque somersaulting dancer who appears to be physically clasping the hand of his novel’s painted male protagonist; his own double who in turn embraces a figure like Chloe, heroine of the story, with her “gay happy smile, and a dress that might just as well not have been there at all.”

His portrait of another photographer, Robert Doisneau, is perceptive as it makes him appear to be an acrobat, balanced, with his camera-bag perilously hanging on scaffolding, an observer hovering above the street that he loved, but also as if caged by the etched black lines of his own viewfinder.

Roland d’Ursel exhibition Portraits d’artistes was mounted at the Musée de la Photographie in Charleroi, and later at the Centre for Fine Arts in Brussels.

One thought on “June 20: Personae”