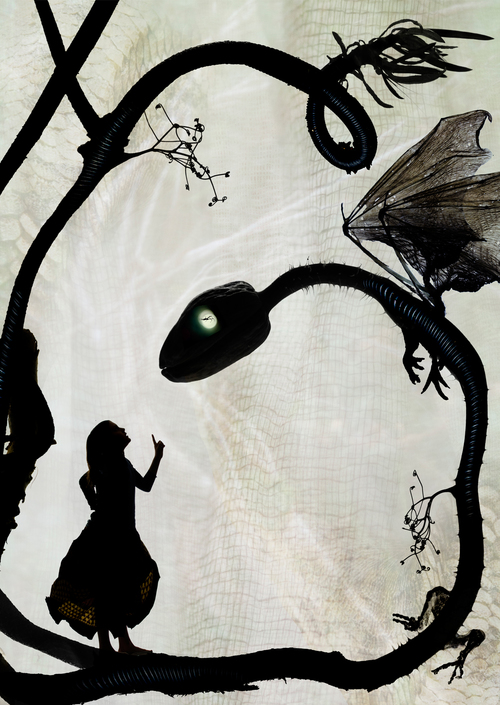 This happy day, November 14 marks the birth of my partner Lorena Carrington.

Though after so many years together I feel I am familiar with her work, in the scope of a daily blog (which this is, inspired by the date on which it is written) it is only possible to deal with a certain aspect of Lorena’s imagery; the silhouette.

This phenomenon of vision is distinctive in its elusiveness. The silhouette is fugitive, like Peter Pan’s or Peter Schlemihl’s shadow. Most often in the natural world it appears as an eclipse, such as a figure in a doorway; of dark against a bright, broad light ground; shaded branches and foliage against blue sky or white clouds, sunset or dawn; especially twilight when night already darkens the extremities of the Earth and stars punctuate a deepening sky to reveal that we hang in boundless space.

A silhouette is not a shadow, but it may instil mystery and fear and inspire fantasy and awe. It is the suspended hawk, or the characteristic shape of a Hawk fighter; it is the hand at the window; the fleet form of human or animal beauty.

The substance of the silhouette need be sufficient only to stop the passage of light, but really may be tenuous or massive. The numeral 1 may be merely black ink, or it may be the front edge of an extrusion the length of a lance seen the moment before it strikes the eye. The silhouette is neither right- nor left-handed, we have only an impression that we see front or back, but it may deceive us, as does the Spinning Dancer illusion.

Sometimes even its substance is ambivalent; we may be uncertain what is figure and what is ground. As the familiar Rubin Vase (vase and faces illusion, discovered in 1915) proves, visual perception of figure and ground may switch spontaneously and sometimes persist even when we know conceptually that what we are looking at is the other side of the boundary.

Photography and the silhouette are close relations. In myth (via Pliny the Elder, The Natural History Chapter 43: 12.), the earliest ‘photograph’, if we take that literally to mean ‘drawing with light’ is the tracing made by the young Corinthian woman of the shadow of her lover on the eve of his departure into war.

Indeed the idea of photography has been with us as long as has the making of images. As Western technology approached the moment when the image projected by a lens could be captured and fixed chemically, the silhouette was in vogue as an economical means of preserving the physiognomy of a loved one. Machines, like the “physionotrace” invented in 1783–84 by Frenchman Gilles-Louis Chrétien (and again in 1802 by Englishman John Isaac Hawkins) aided in the production of silhouette portraits during the reign of Louis XIV.

Those who plied the physniotrace at public fairs and in their studios saw  profit in Johann Kaspar Lavater’s meditation in his second volume of Essays on Physiognomy:

What is less the image of an individual of flesh and bones than his simple silhouette? And yet, what does it not say? There is gold there, but the purest!

It is in this ambiguous borderland of the silhouette, a netherworld, that we find Lorena Carrington‘s imagery. While her work is widely appreciated amongst the community of folk tale scholars and authors, Dance Macabre is no fairy story from Disney’s Fantasyland. The encounter, of a vigorous young girl with a wraith made of leaves and twigs, is of flesh and blood with crumbling phantom in a storm of dust. Death is a fragile apparition, and yet appears mighty. The young girl in her innocence twirls in its hands, but she may be leading, or taming, or dismembering, the devil; we do not know if they struggle or dance. Any parent would recoil at the spectre of young death the vision provokes, but with a puff of breath, the idea and this image of dust and dry leaves may be blown away. 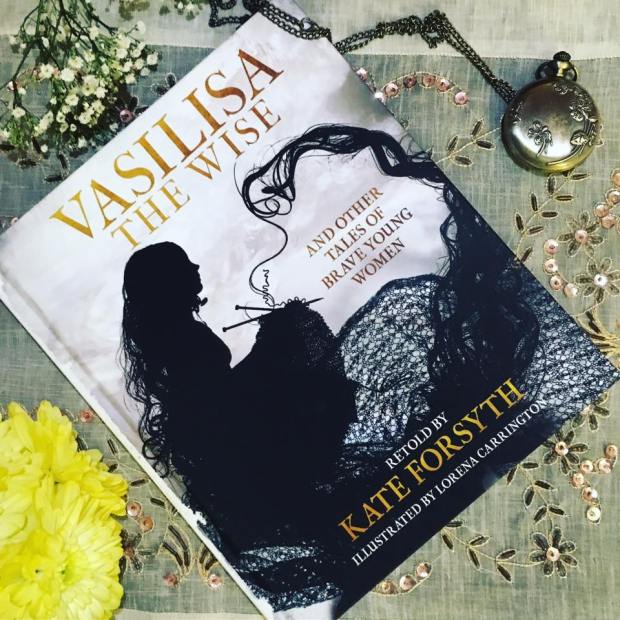 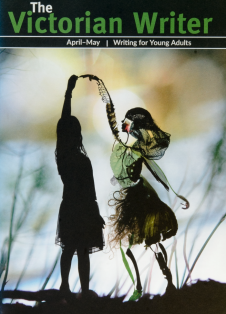 Carrington’s work straddles art and illustration, has been exhibited widely and now, in her collaboration with author Kate Forsyth, will illustrate their Vasilisa the Wise and Other Tales of Brave Young Women to be released by Serenity Press in early December. It follows a long tradition of the use of silhouettes in the literature of fantasy.

Currently she employs the silhouette to make of the fairy tale an allegory for puberty and adolescence. Metamorphosis, which recently appeared on the cover of the journal The Victorian Writer, deals with sense of change at that new stage in life. As a child we may have formed a steadfast idea of who we are in the world, but for those entering adolescence, she says, “our sense of self can be all but annihilated. For a long time it’s a dance between the two. As we pull away from childhood, we have to rebuild ourselves, trying on all sorts of skins; cobbling together influences and ideas until we remake ourselves as adults. We are bone and feather, leaf and twig; a fragile tangle of scavenged treasures.”

Carrington finds the material of her silhouettes and layered backgrounds in the landscape around us, the bush in Central Victoria surrounding Castlemaine where we live, as she explains in an interview with Rebecca-Anne Do Rozario in TEXT.  For instance, the bones of a fox, a complete skeleton discovered by friends who brought it to her wrapped in a scarf, she painstakingly reassembled on her light box with the help of a book of animal anatomy. This she photographed, then undertook further, digital, construction in Photoshop to make The Bridge of Skulls.

Lorena can tell the story of her own artworks better than I do. You will find them along with meditations and conversation on the received history and current evolution of folk and fairy tales and their depiction of woman and girls at her blog The Bone Lantern.