November 29: Sometimes, we photograph out of love.

It is only when I look through the overflowing yellow Ilford boxes my father left us, where I see myself as a boy, with my sister and brother slinking through the ti-tree armed with pampas grass stalks, that I am aware of his love for us, way back then, before he died, and before the tragedy of the end of his short but very full life.

Alain Laboile (*1968) who opens his exhibition Le temps retrouvé today at 29 ARTS IN PROGRESS gallery, Via San Vittore 13, Milan, had but one photograph of his own childhood. His family just were not photographers, and he, a sculptor, didn’t discover the medium until 2004 when he bought a digital camera to document his artworks. He was late too, in taking up art, only becoming interested when he started accompanying his girlfriend, now his wife, to her art history classes, but his training as a carpenter makes him a man who can do things for himself.

Living in the countryside in Bordeaux, he taught himself to use his camera for macro shots of insects; mating slugs for example, which fascinated him. Joining an online forum Planète Powershot, he was able to start picking up hints from other amateurs and to start showing his pictures for which he received a lot of positive encouragement.

Inevitably, American reviewers compare Laboile with Sally Mann, but their similarities are superficial; both photograph their families, with unclothed children often being the subject (controversially, in Mann’s case), and that’s where any commonality ends, though notably, neither received any formal training in photography.

Their intentions are quite different. Mann’s imagery is so often a restaging, for her large format camera, of family incidents she has seen or imaged. But they are more about the photographer, whose life experiences have certainly been momentous, than about the subject, which in each case stands in for something else via an expanding symbolism Her choice of the large format camera (above) she inherited from her father is, though she disavows any interest in reading in the history of photography,  a link to the West Coast tradition, to Minor White and via him to Walt Whitman’s very American poesy; she studied literature at university, not photography. This is evident in her very considered and metaphoric titling of her works. 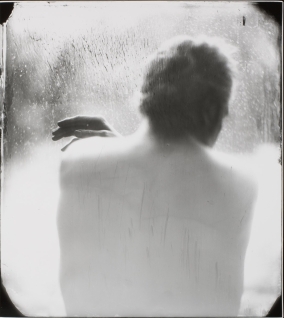 The comparable subject matter of the above images emphasises their considerable difference in approach. By 2009 Mann was exploring ancient processes like the the collodion wet plate; the first process that Julia Margaret Cameron used (who is clearly another influence on Mann) and which superseded the daguerreotype and tintype. Much of the effects in her photographs are artefacts of the large format camera with its nearly infinitely manipulable shallow focus achieved through experience of its deliberate and painstaking operation, and of such media as her collodion and ambrotype which bestow an antique textured patina of tears, scratches and stains.

Laboile is French, and his tradition and his impulse, is humanist; his background is in sculpture and in those art history lectures that inspired him to become a sculptor, the medium in which he still earns his living. The symbolic in his work is coincidental to the split-seconds which his shutter snatches;  the mercurial actions of his six children.

In 2016 interview he said his camera was a full-frame 22Mp digital Canon 5D MarkIII camera on which he used only an f1.4 35mm lens, for simplicity; he has become instinctive in its use through familiarity with its slightly wide field of view and close focus capability. Elsewhere he mentions using a Leica M Monochrom and indeed the 2015 24Mp Leica Q is the subject of a sculpture revealed in a lovely, lingering video by his daughter Olyana. Leica has been using his sculpture to promote their cameras and from 2016, he has held Leica workshops and shown in Leica galleries in Sao Paolo, Los Angeles and at Rencontres d’Arles. 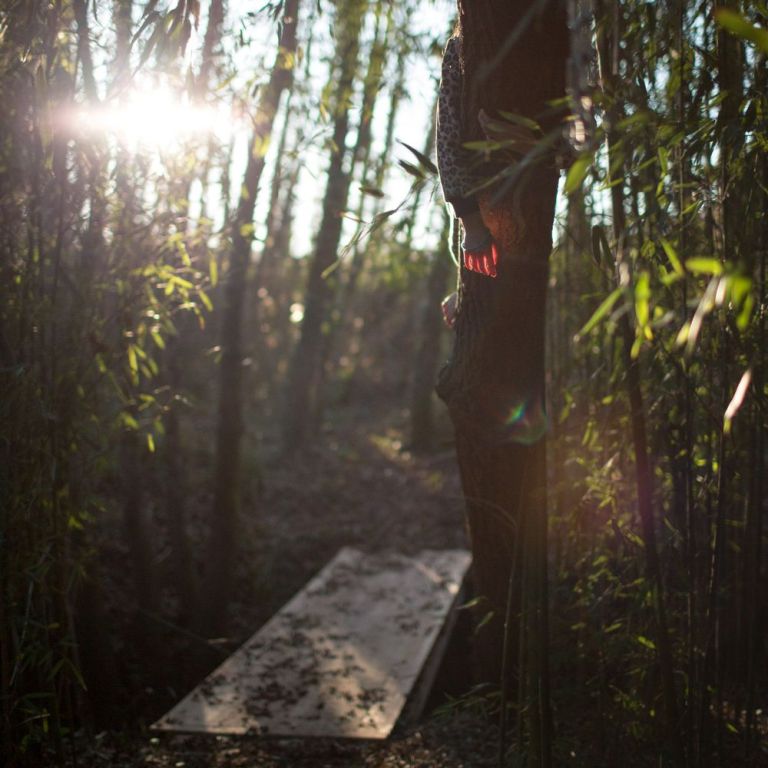 Both he and Sally Mann have the scene set for them—the pastoral seems the natural state for the child, a place to invent their own world; Mann’s father, she has said, applied benign neglect, while Laboile revels in the imaginings of his children, absorbing them in his sculpture and photographs. His setting is Bordeaux in the South of France, close to the ocean. The house,  where he was born, is without modern luxuries but is on land full of his sculpted creations, bordered by a stream and surrounded by a bamboo forest with deer, frogs, garter snakes and myriad insects.

Wanting a pool to swim in during summer 2011, the family dug one deep into the clay and lined it with concrete—Laboile is a can-do guy, but even so there was a time, even after he’d received international acclaim, that he had to sell his camera gear to cover living costs. 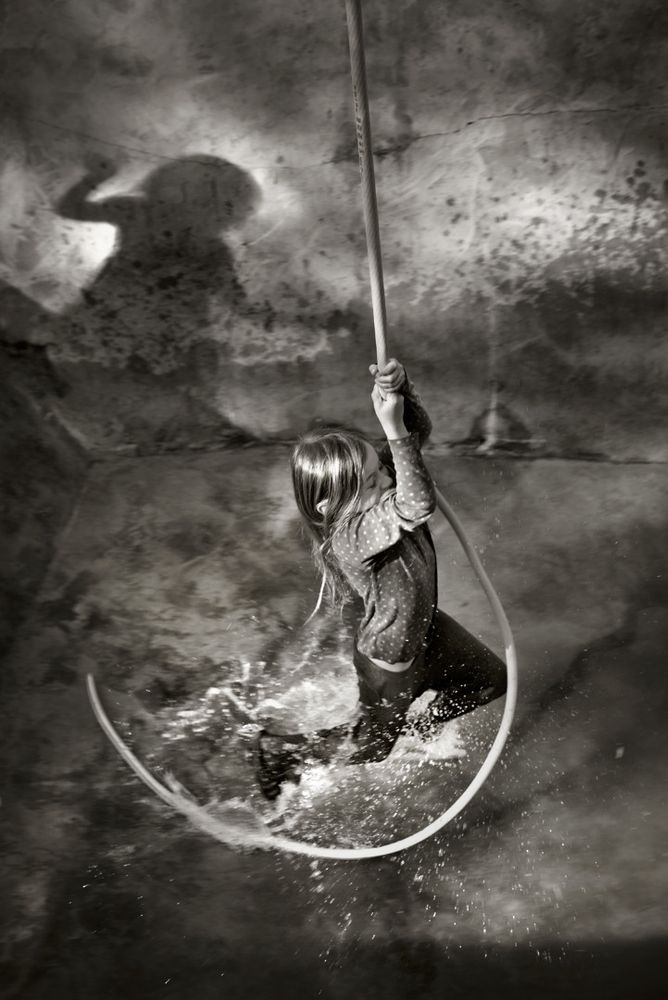 The pool however, bestowed on him a new approach to his photography just at a time when his children were of an age to enjoy collaborating on his image-making. Pointing his camera into the surface of the water he discovered a mirrored world in which the background was a blank slate of open sky, an open stage that invited a procession of sculptural performances.

The result is the series Réflexion autour de bassin from 2013, reviewed by Daphnée Denis for Slate, January 24, 2013 and Jeff Swartz for ABC News, February 1, 2013. No longer candid pictures, in these the children perform, sometimes with his sculptures that populate the garden, and sometimes just for the joy of producing effects for the camera; clearly it is a joint effort, directed by the whole family, and a lot of fun.

Consciously and deliberately, the water itself is employed as a ‘filter’, if one thinks of it photographically, or as a mould or chisel in sculptural terms.

Paolo Monti (*1932) who died on this date in 1982, was this year 4th May – 29th July given a retrospective Paolo Monti:Photographs 1935-1982 at MEF Outside, via Filippo Juvarra 13, 10122 Turin, curated by Pierangelo Cavanna and Silvia Paoli in collaboration with Civico Archivio Fotografico of the City of Milan. Coming from a background as a manager in industry, he became so fond of photography that he made it his profession from 1953, exhibiting and working as a critic and a curator.

It was his move to Venice post-war and his joining with along with Gino Bolognini (1908-1994), Luciano Bresciani ad Alfredo Scattola to form the group “La Gondola” in 1948 which consolidated his critical and experimental approach in photograms, chemigrams and colour.

Of interest here is his portrait series devoted to his niece Meme (or Mariel, Maria Elvira Cocquio), daughter of the painter Carlo Cocquio (1899–1983), a friend and Monti’s brother-in-law. Italian, there is a strong neo-classical style in Monti’s architectural photography for which he is well known, but in this longitudinal series from the 1940s to 1960, a Pittura Metafisica quality is evident. 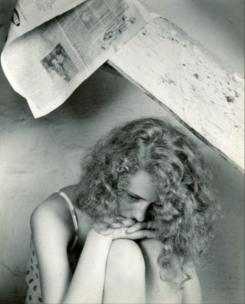 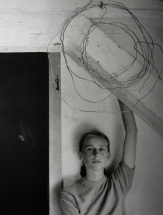 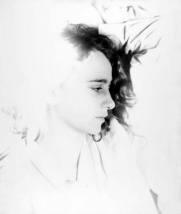 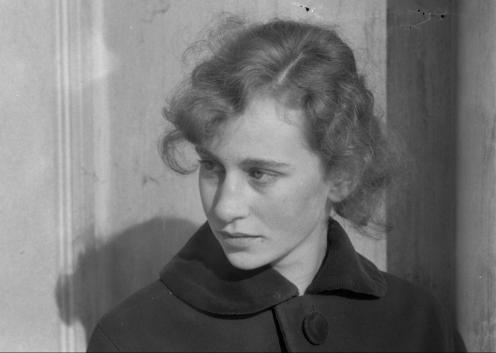 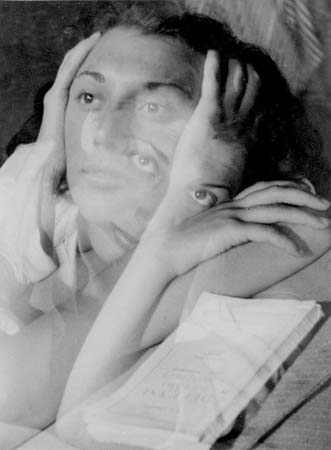 The almost universal act of photographing one’s family may give rise to art, especially if it is a reciprocal act of love.

If this post turns your mind to childhood, you may remember these lines;

As air and moonlight I was free
Within that fairy fold,
For all the world belonged to me,
When I was six years old

The poem may be found in a photobook Wiser Than Evening newly released by my partner Lorena Carrington and Serenity Press just in time for the Festive Season and full of poetry, stories and theories from and about the fairy tale. She has illustrated it with 22 of her characteristic and lovingly nuanced photomontages.