The camera lens is a hungry eye that devours all before it.

As we ‘shelter in place’ during this coronavirus lockdown, and as things get serious, many will be sorely missing their shopping — even window-shopping —  and perhaps are realising that if consumerism is an addiction, photography is the pusher!

It’s no coincidence that so many photographers started their careers in the shop window, as window-dressers; the real-life Blow-Up photographer David Bailey of course, and Americans — Vogue photographer Henry Clarke who first worked in the 1940s as a window dresser for I. Magnin, luxury department store in San Francisco before becoming a background and accessorising assistant at the Vogue New York studio, where he learned to photograph by observing the different styles of Cecil Beaton, Irving Penn and Horst P. Horst; also the portraitist of artists Karl Bissinger; American fashion and portrait photographer Terry Richardson (at Bloomingdale’s in the 1950s); the man who inspired Robert Mapplethorpe, George Dureau began his career at D. H. Holmes department store; the Swiss Walter Pfeiffer; the German Alice Lex-Nerlinger, worked as a shop window decorator in the department store Tempelhof from 1916–18, which brought her closer to the women workers of her early photography; Peter Lindbergh also German, and a fashion photographer and film director, worked as a window dresser for the Karstadt and Horten department stores in Duisburg. .

Our own Ellen Jose, an Australian indigenous artist and photographer earned a living in merchandising display, and another German, Henry Talbot survived as a department store window-dresser in London in the 1930s before being shipped as an ‘enemy alien’ on the troopship Dunera to Australia, where he became was a fashion photographer. It’s not really stretching the point, since her work is all about ogling, to note that Diane Arbus’s father David Nemerov was a window dresser at her mother Gertrude’s Fifth Avenue department store, Russeks, before they married.

Gene Moore was a leading 20th century window dresser who by necessity produced quite extravagant photographs of his innovative, often surrealist windows for Tiffany’s which targeted desire for tiny things like this blue diamond with which he manages, by adding the right props, to fill his Valentine’s Day window.

But we want not just Moore, but MORE!

The photographer to give it to us is Farah Al Qasimi (1991). She’s from the United Arab Emirates, where they know how to shop, and in 2018 moved to New York City, the throbbing, palpitating heart of consumerism. This year, her seventeen photographs Back and Forth Disco, appeared courtesy of the Public Art Fund, displayed in the street, where we now most often see advertising; in bus shelters, one hundred of which throughout the metropolis, were taken over for her imagery.

Al Quasmi’s eye revels in visual excess. Woman in Leopard Print makes the viewer complicit in a clandestine observation which is punctured by the eye in the mirror of the subject’s compact. After moment of embarrassment, we are reassured that she looks not at us but at herself. The hand holding a mirror is a representation of vanity that is compounded by the background image, a giant pair of hands presenting their carefully manicured nails which seem to cradle — or claw at — the smaller figure.

The mirror as a symbol of self-admiration, usually intended to invite the viewers’ entrancement with the subject, is repeated in countless Western  paintings, but not, of course, in traditional Islamic art. In fact, for strict Moslems during religious observance of the Hajj, such use of a mirror may be forbidden, though in the Hyderabadi Muslim marriage ceremony, after the nikah or official part of the ceremony, the bride and groom hold an open Qur’an with a mirror on one page, and, after reading a verse, look in the mirror and see each other.

Some of Al Qasimi’s earliest work is The World is Sinking, shown at The Third Line, Dubai, September 24 – November 8, 2014. Their effect is psychedelic, an acid trip amongst stacked bolts of fabric in a marketplace, like those that we see from Back and Forth Disco, nauseatingly belly-soft and all-enveloping.

‘Mind your head’ reads an improvised note of warning in one image, another announces “Everything Must Go.” Sometimes she makes conspicuous or in another instant, camouflages, any apparent subject. Pattern and surface are Al Qasimi’s obsession, forced to our attention by being pressed flat through her photographic rendering. Ultimately though, it is in the service of a sociological curiosity about her own, and America’s, cultures. 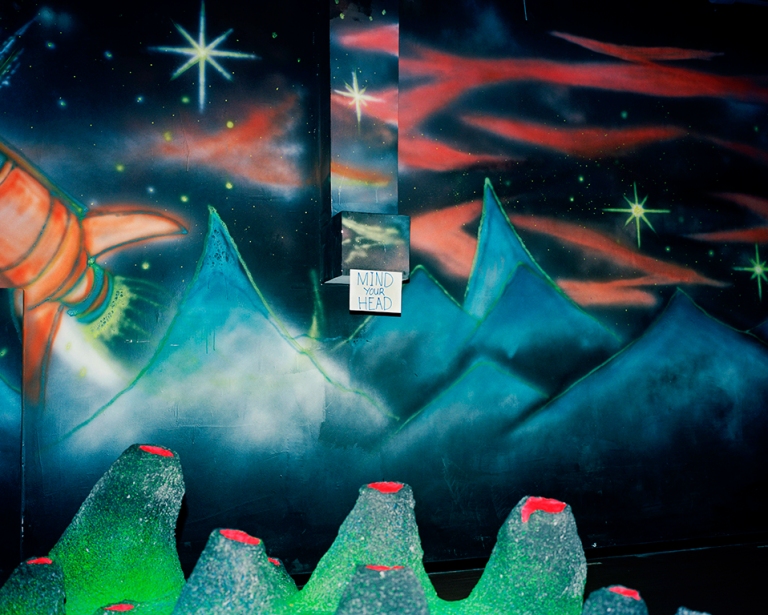 Returning us to the subject of shopping is French photographer Denis Darzacq (*1961), once a photojournalist and filmmaker, he now concentrates on making art. Lianzhou Museum of Photography, China is showing his Prey for the Shadows until 5 April. You will be familiar with his 2007 work in which shoppers appear to levitate in the aisles of supermarkets as if experiencing a religious ecstasy or being caught up in an alien tractor beam.

Darzacq continues to defy the gravitational logic of the pictorial plane in a variety of projects. Elsewhere, in a series called Fake Stars he allows reflections of room lights to hover over his copies of framed prints of photographs of the sky.

The candy curdles and sours in the eye, or its taste becomes bland, and the eye blind.

Darzacq shifts the equation of the photograph; when paired with an object the need for representation is stripped away, so that the Duchampian object-nature of the photograph  is the remainder.

By looking at photographs we consume them, whether we purchase them or not. Consumerism, like any addiction, entails a painful exchange of seduction with revulsion, and  Darzacq therapeutically strips that bare, helping us into recovery.