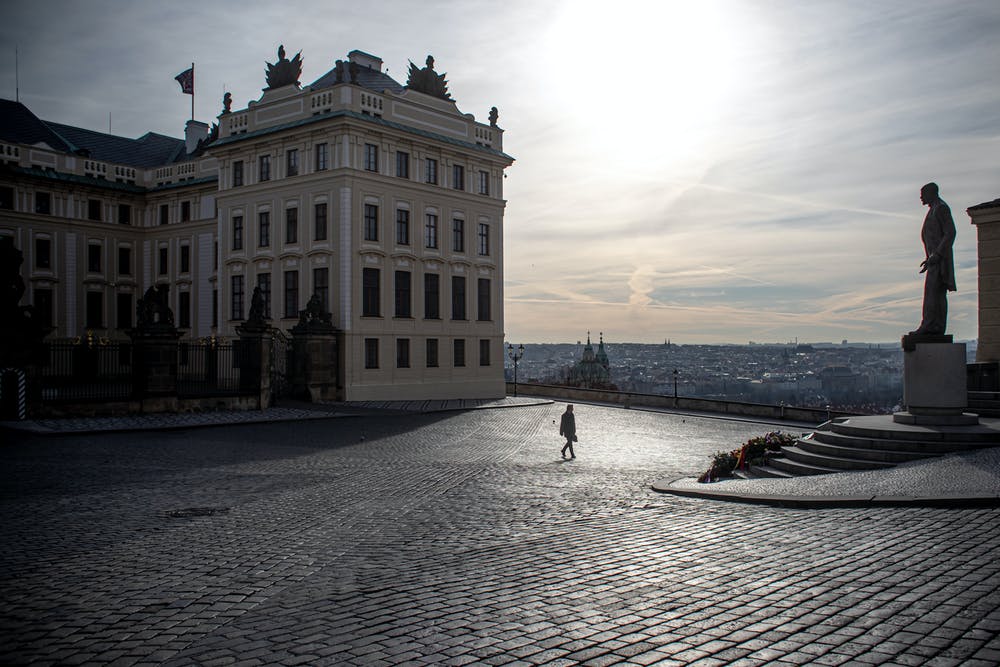 April 10: In streets now empty of humanity, how might the photograph interpose a human vision?

I’ve just discovered a fine and timely meditation from three weeks ago in The Conversation‘s “Friday essay” that Cherine Fahd and Sara Oscar wrote together on “the uncanny melancholy of empty photographs in the time of coronavirus” amplifying observations from around the world about the weirdness of our deserted cities.

Modestly, they don’t mention their own work, some of which (above) might amply serve  the topic. But as one would expect, they being not only photographers, but academics, respectively Director of, and Lecturer in, Photography in the School of Design at the University of Technology Sydney, they don’t miss the opportunity to use examples of deserted sites from Candida Höfer and Thomas Struth, or to evoke the pittura metafisica of Giorgio De Chirico; I’ll use his Mistero e malinconia di una strada of 1914 because it’s a favourite and the title most closely matches that of their essay, while  La malinconia d’una Bella giornata is his painting they choose to pair, for its eerie similarity, with a month-old photograph by Prague photojournalist Martin Divisek.

They cite also a familiar image from the earliest days of our medium, an apparently empty street in a famous city; Louis Daguerre’s photograph of the Boulevard du Temple.

In contrast to their theme, this historic picture is famous as being the first known image of a street actually populated; by a man having his shoes polished who, having paused during the exposure of several minutes, has been registered as a solid, if blurred, form on the very slow daguerreotype plate, while all other activity on the boulevard, the passing carriages and pedestrians hurrying to their place of work, is obliterated in the blur of movement.

They also enlist machine images, like those made with drones, and conclude:

Photographs of empty public spaces unmask the illusion that we are integral to existence. Even without a camera operator, optical technology will linger on and capture scenes of the world without presence.

Who can say whether that operator is human, or nonhuman, like a satellite from outer space that is still programmed to picture our buildings even if we aren’t in them?

The cameras and algorithms of Google Earth uncannily allow the viewer ‘remotely’ — as a disembodied non-presence — to walk the streets of nearly any city or town in the world, as thousands of frustrated would-be travellers are now doing as they idle in their apartments. You may even visit, nearly 200 years late, the site of Daguerre’s picture. It calibrates the exact compass heading along which his camera was aimed. But don’t rely on algorithms. 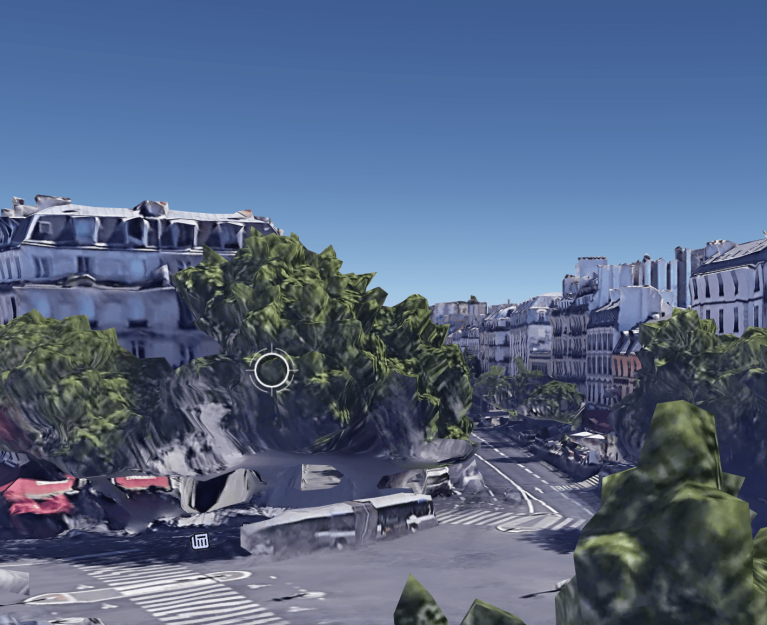 On April 5, 2002 Jacques Darcy-Roquencourt,with Françoise Reynaud, curator of photographs at the Musée Carnavalet in Paris, and Catherine Tambrun, author of Paris in 3D(2006), made photographs of the Boulevard du Temple with Daguerre’s 14 inch (355mm) lens in tests complementing the research carried out by Peter von Waldhausen, with the collaboration of the Berlin observatory, to determine the location of Daguerre’s camera; whether his picture was made from his Diorama, or his nearby house. By about half-past twelve on the morning of the 8th of March, 1839, the year of his announcement of the invention of the daguerreotype, fire had destroyed the Diorama, a major ‘virtual reality’ venue in Paris which he had built. At the time of the fire, Daguerre was visiting with Samuel F. B. Morse and examining Morse’s telegraph. The Place de la République now occupies its site.

By making pictures from the barracks building that stands roughly at the site of the Diorama, they concluded that the location was where now Rue du Fauborg du Temple joins the Place de la République and that Daguerre made his photograph from the window of his studio on the top floor of his Diorama de Louis Daguerre at 5 Rue des Marais, behind the Place du Château-d’Eau. Three or four of the remaining, unchanged buildings are recognisable along the Boulevard, though much of the scene, and the place of the shoeshine stand, is obscured now by trees.

The Google Earth view orientation is also SSE but shadows there run in an opposite direction; Daguerre shows us a morning scene at 8am while the Google view is from July 2019, in the afternoon. A letter from the father of Viollet-le-Duc, of October 14, 1836, mentions a view taken from the top of the Diorama in 1836; one of many tests during the years 1836 and 1837. Writing on April 18, 1837 to Niépce’s son Daguerre comments: “I would like to do proper tests [i.e. real photographs]; so far I have only been able to do experiments. All my devices are working perfectly, I only need good weather which is devilishly delayed”. Thus Daguerre’s image may have been made as early as 1837, not 1839 as it is commonly dated, even by Fahd and Oscar.

Amongst three pictures sent as samples of the new art to the ruling houses of Russia, Prussia, and Austria, Daguerre himself labelled this image “Huit heures du matin”. The team, using the original lens, concluded that the picture was made between 24 April and 4 May 1838, and that contrary to the received wisdom, the exposure was made though an f9 aperture, and not at 15 but at 7 minutes; a more realistic duration that might capture a man standing while having his shoes polished. It is an exposure time more likely to have caught the other figures in the image that some fancy they can discern; one or two women (though in stature quite small, so perhaps children?) standing across from the man — perhaps waiting for him — with (or in?) a small two-wheeled cart, a market barrow, or more probably a pram; and a child’s face at the bottom of a window in the foreground building. 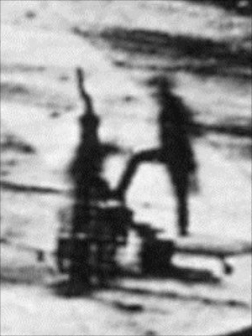 Detail from Daguerre’s Boulevard du Temple; the man having his shoes polished and blurred figure of the shoeshine boy.

Detail from Daguerre’s Boulevard du Temple; two women with a pram or barrow? 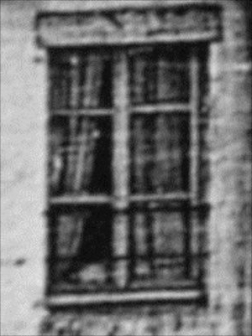 Detail from Daguerre’s Boulevard du Temple showing what could be a child peering through a window in the foreground building.

I go back to the rhetorical question posed by Fahd and Oscar…”Who can say whether that operator is human, or nonhuman?” Like the desire to discover other human figures in Daguerre’s Boulevard du Temple, it is a conundrum I have long contemplated; how might a photographer intervene in making their camera images so that they retain evidence of a ‘human’ vision, of their own sight? Let me give some established examples that move toward that ideal.

The camera of Peter Bialobrzeski (*1961) confronts an urban reality that is, wall-to-wall, artificial, a human construct, a vast juggernaut oppressive in its relentless sensory overload. He often takes advantage of high vantage points, like Daguerre in his eyrie above Paris; using office blocks, apartments, or multi-storey carparks to give his large format camera ingress into the labyrinth. For this series The Raw and the Cooked of 2011 he left the shutter open for up to eight minutes, around the same duration as for Daguerre’s Boulevard du Temple. Through his series we are guided into Asian megacities through a strategic progression, as he explains, “from the simplest hut to the complicated dense tower block arrangements, but in these latter images we see so many repeated individual apartments that one struggles to say how many people live there. The series is essentially a provocation ; it asks whether this is the civilized way to live.”

Residents of megacities such as Bangkok, Beijing, São Paulo and Bogotá, where varying coronavirus restrictions have been imposed, report blue skies and an unprecedented decline in pollution, and we wonder why we pursue a capitalist rat-race when governments u-turn from austerity to providing, at least in the short term, a version on universal income. The citizens in Bialobrzeski’s crowded, overwhelming images form torrents and eddies of blur, melting into a frenetic pursuit of the means to live, crammed in an ugly dystopia.

Alexey Titarenko (*1962) directly referenced Daguerre’s Boulevard du Temple’s for his 1990s series City of Shadows, experimenting to dissipate and dissolve the human presence through the use of long exposures using a Hasselblad camera on a tripod outside the entrance to Vasileostrovskaya subway station.

Able to expose for over a minute and he interprets the resulting wraiths as “shadows from the underworld ” He enhanced the effect through solarization, toning, and bleaching, arriving at his first successful image Untitled (Crowd 2) in 1991, printed 1993 realising his ambition to render his fellow citizens as spectres amidst the monumental nineteenth-century streetscape of the city overlaid with signage. Titarenko used exposures as long as three minutes. When Arago announced the daguerreotype, Titarenko argues, he did not praise it as a new technique to duplicate reality , but as “a discovery of the notion of time;” [ … ] “what we see is relative,” he says.

Tokihiro Sato (*1957) in his 1990 series “Photo Respirations” like Bialobrzeski, used a large-format, 8×10 camera mounted on a tripod for extreme, three-hour exposures as he moves into and through the frame. In daylight, such as for his Tokyo cityscape numbered #87 (see image 3), he carried a shaving mirror and at intervals reflected the sunlight from it into the lens so that it appears as a series of bright orbs scattered across the intersection of what is one of the city’s busiest, packed with traffic and pedestrians as he recorded it. The result might be a species of self-portrait were it not for the fact that his only trace is that disc multiplied across the image, a cipher too abstract to signify identity. Since Sato originally trained as a sculptor, one might regard his intention as a conceptual manipulation of space.

For the photographer, it is a vivid example of the impact of vision on the subject. Yes, being from a camera, it is an example of machine vision that Fahd and Oscar point to, but we only see Sato’s images because of his intervention inside them mediated by his human visualisation.