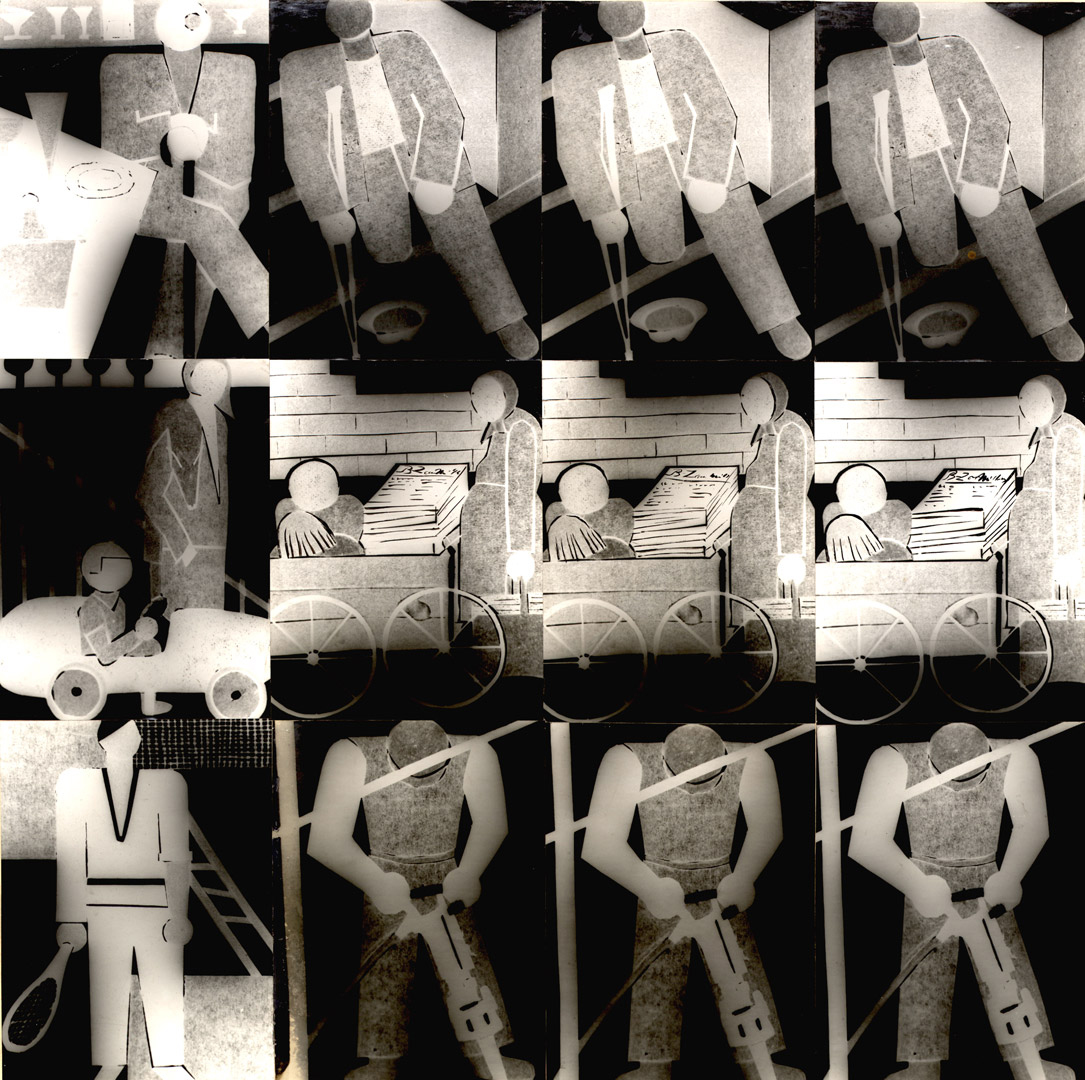 October 29: Though she lived until 1975 in East Berlin, Alice Lex-Nerlinger, born on this date in 1893, and her work remain little known.

Having rediscovered the artist in the mid-2000s, US feminist art historian Rachel Epp Buller, with a grant from the Fullbright foundation in 2011, meticulously searched the artist’s archive at the Berlin Academy of Arts, then in cooperation with the Academy and assistance of the gallery, mounted Lex-Nerlinger’s first retrospective last year, appropriately at the ‘Hidden Museum’ – Das Verborgene Museum – from 14 April 2016 – 07 August 2016.

And it was just after her death on 21 July 1975, that a joint show Alice Lex-Nerlinger / Oskar Nerlinger, with her husband (above, also born in 1893, and who died in 1969) appeared at the Neue Gesellschaft für bildende Kunst, Oranienstraße 25 10999 Berlin, 14 October–18 November that year. It concentrated mainly on her post-war painting. Today, OnThisDateInPhotography looks at her photomedia.

For twenty years she was part of an international avant-garde photography scene which centred on the ‘New Vision’ emerging in Germany, a style she very capably embraces in her straight photography of the period, all with a forceful feminism;

She was represented in important exhibitions such as 1929 in the legendary Stuttgart Film und Foto, and as the only woman photographer in Werner Graeff‘s (1901 – 1978) influential and now rare 1929 book Es kommt der neue Fotograf! (‘Here comes the new photographer!’) published in Berlin by H. Reckendorf. Her work appears on the left-hand page of the spread above from that publication, a photomontage related to that below, the 1929 Aussperrung (Lockout). 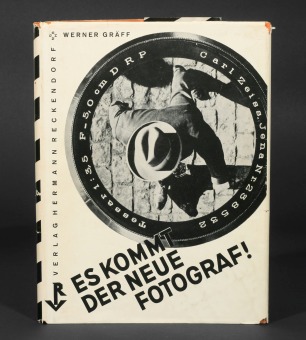 The photographic medium enables a multiplication of these figures of authority, soldiers and police, commanded by the raised fist of the bosses, to surround the bewildered workers, locked out of their workplace during industrial action.

Berlin in the 20s was a laboratory for expressionist, Dadaist and futuristic rebels and Lex-Nerlinger, amongst them, tried out different styles and media searching for a politically effective means of expression. Her work is emphatically and unashamedly didactic and becomes gradually more diagrammatic.

In 1927 Lex-Nerlinger and her husband became member of  the Communist KPD and of the ASSO, the Association of Revolutionary Visual Artists of Germany, whose aim was to use art as a weapon in the class struggle. She began to design very successful political posters, seeing no distinction between the applied work and that which she exhibited.

The daughter of Kreuzberg lamp manufacturers, during the First World War she studied at the educational institution at the Museum of Decorative Arts with fellow students George Grosz, Hannah Höch and Oskar Nerlinger, whom she later married.

She addressed her traumatic experience of that war and its horrific aftermath with Field Gray creates dividends (1931) in which the artist denounces the capitalist profit-making through war; a factory in the background churns out armaments directly to a screaming soldier who – entangled in barbed wire – occupies half of the image. Lex-Nerlinger is not content to merely point at injustice; here again repetition, of blank factory windows, faceless workers, tanks and shells, plays a role in explaining the causes of a social evil.

In this case the work is non-photographic, but in employing an airbrush technique it imitates the tonal qualities of her black-and-white photomontages, such as ‘Poison Gas’ below.

It also refers directly to photojournalism supporting a left-wing and anti-war stance expounded in Ernst Friedrich‘s 1924 book Krieg dem Krieg (‘War upon War’) in images like Mütter! Warum habt Ihr das geduldet??? (‘Mothers, why do you tolerate this?’, left, below) and Mütter! Das war das Schicksal Eurer Söhne im Krieg- Erst gemordet, dann bis auf die Haut geplündert und zuletzt liegengelassen, den Tieren zum Fraß aus (‘Mothers! That was the fate of your sons in the war: first murdered, then but for their skin stripped and left lying for animals to eat’). 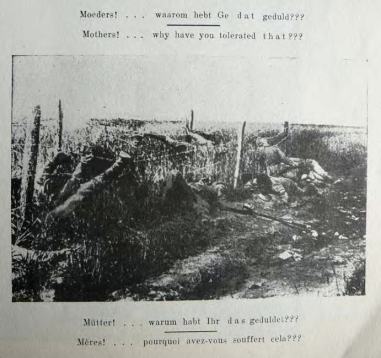 Most productive in the years up to 1933 and the rise of Hitler she developed her spray technique at the same time as photographing and montaging; forms and materials selected for their capacity to urge critical and revolutionary messages:

All my work had the aim of collaborating to improve people’s lives, and nothing seemed more senseless than for an artist to paint for snobs at a time when people were more and more impoverished.

Her photomontage Work! Work! Work! from 1928, for example, illustrates the everyday reality of life for the proletariat: a drab exchange of machine production for the hasty gobbling of dry bread in work-soiled hands.

The stop-watch in the capitalist’s leather-gloved hand sets the rhythm, echoing the mechanical repetition of the workers’ fists.

Rich and Poor (1930) makes the class difference explicit through direct comparison; the elderly well-to-do relaxes in a café while outside the war invalid begs; the child of the rich woman pedals his toy car along the street beside her, while the children of the poor share their pram with newpapers being sold by their heavily pregnant mother; the tennis player exercises for recreation while the worker labours over his jack-hammer.

All are constructed in the darkroom from intricately cut paper printed as photograms in a rare and virtuoso exercise in masking that exploits the negative image and the texture of paper.

Repetitions underline the imbalance in the ratio of numbers of poor to rich, but none is printed exactly the same, as the photogram technique entails variations in density and different degrees of light ‘bleed’ under the cut paper templates.

This is a technique she develops in other images of the futility of industrial effort that enslaves the worker.

Lex, in siding with the proletariat, is especially interested in the situation of her sisterhood, and her darkroom compositions have their roots in documentary photography which she practices in her 1928 series Working Women in which, as in Lorenschieber and Arbeit! Arbeit! Arbeit!, the subjects are yoked to the machinery of industry. The poultry breeder (left) poses half-hidden behind chicken-wire, or the seamstress is bent over her sewing machine, dreaming, in double-exposure of the carefree happiness of her girlhood, while the typist frustratedly scrubs at a misprint with an eraser. Ironically, the series prefigures that of Jo Spence forty years later; so little has changed for women in the workforce!

That female self-determination entails more than employment is evident in Lex-Nerlinger’s most famous work Section 218, an appeal against a paragraph of the law which punished those providing abortions with imprisonment, protested by many of her comrades in the communist movement. In this case the women are not presented as victims but as group who strive in solidarity and strength against a giant cross that reads “Paragraph 218”, toppling it.

With the seizure of power by the National Socialists the artist was not allowed to exhibit. Following a short imprisonment in 1933 she retreated into an ‘inner emigration’ and did not publish until 1945. Fearing raids on her studio, she destroyed much of her work and the Second World War did the rest.

We are left with only the vestiges of her output of this period, though researchers like Ira Plein, whose German language master’s thesis Alice Lex Nerlinger (1893 – 1975) Motifs and imagery in the service of the class struggle 1928-1933 passed at the University of Trier in 2012, are painstakingly searching the archives and ephemera of the era for what can be salvaged.

Even without a contract in the fifties Lex, as she was fondly known, created photo-derived portraits of workers, among which the painting Schaffnerin Anni (‘Conductor Anni’) the now legendary streetcar artist, represents a climax.

Anni (right) faces the viewer head-on, looks us in the face with a challenging smile and points to her tram-conductor’s money changer, which in street jargon is a “Krautkasse” (“Herb’s purse”), which she wears around her neck. She was the mother of Hannelore Kraft (née Külzhammer; born 12 June 1961) a German politician who was the President of the Bundesrat, the first woman to hold the office.

For the last three decades of her life, Lex‐Nerlinger continued as a well‐known graphic designer and portraitist in the GDR, working until the day she died in 1975, but under the state’s sanctioning of “Socialist Realism” her photomontages, that she had worked so hard to master, were denounced as ‘formalistic’. However, the force of her image Paragraph 218 was restored when it was taken up by the women’s movement of the 1970s. 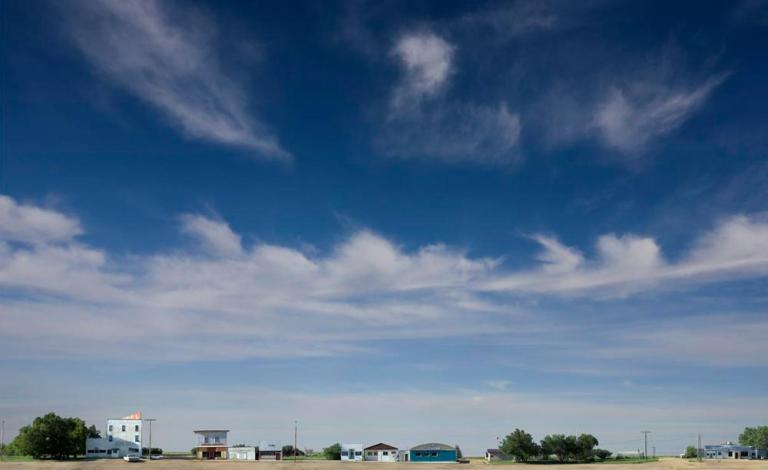 Coincidentally this date also marks  with the birth of Danny Singer (*1945, Edmonton, Canada) who employs digital montage for his streetscapes (above) of threatened rural communities, and the death of Geoffrey Crawley (1926 – 2010), photographic expert and journalist, editor in chief of British Journal of Photography for two decades and noted for exposing the photographs of the Cottingley Fairies taken by two girls, Frances Griffiths and Elsie Wright, in the early 20th century, as a hoax.

Photomontage is manifested in many ways in these various photographers’ work and it always entails a hybrid approach, but few amalgamate painting and darkroom montage and move as confidently between them, as did Alice Lex-Nerlinger in parallel works of spray-painted and gelatin-silver reproductions of cut paper.

NOTE: I have used research for this article to write the Wikipedia entry on Alice Lex-Nerlinger, where you will find the references used. James McArdle, July 3, 2019.