March 29: Futurologists are rare amongst photographers. The lens vividly sees the past; the future is an aberration.

And who anyway would have predicted where we are now? Only the epidemiologists whom most governments seem to have ignored, before Covid19.

Certainly not Anton Bruehl (1900–1982). When he migrated a century ago from South Australia after WW1to America (and in the midst of that last influenza pandemic) with his German parents, sister and brother, he found work as an electrical engineer with General Electric.

He could not have predicted then that he would become a highly successful advertising photographer; it was just a hobby. Nevertheless, he enrolled at the Clarence H White School of Photography, and by 1924 became an instructor there exhibiting Pictorialist art photography in the salons.

With fellow graduate Ralph Steiner, in 1925, they opened a studio on 47th Street, making it big with a narrative series of amusing table-top shots of three cut‑out figures dressed in suits for New Yorker magazine; advertisements for Weber and Heilbroner menswear. In a running series in the weekly issues they chimed with the ironic humour and sophisticated savoir-faire of the magazine. It was not to last; their client was wiped out in the Wall Street Crash (sounds familiar?)

Remarkably, Anton Bruehl studio survived and, enlisting his brother Martin as assistant, produced a stream of daring modernist advertising images for Fortune and Vanity Fair, Vogue, and House and Garden throughout the 1930s–1950s, Bruehl being poached as Condé Nast’s chief colour photographer in 1932, having contracted with their engravers to perfect colour reproduction, giving the publisher the edge on quality colour before Kodachrome direct colour film replaced the technology in 1935.

For the Worlds Fair of 1939 he produced a vision of the man of the future wearing an elaborately coiffed beard, suede slip-ons and designer Gilbert Rhode’s jump- suit-cum-plus-fours that ‘banishes buttons, pockets, collars and ties’ for a radio transceiver attached by chain-mail to his chest, and his headdress, a chrome antenna;

Man of the next century will revolt against shaving and wear a beautiful beard … His hat will be an antenna snatching radio out of the ether. His socks –disposable…his belt will hold all his pockets ever did.

The pair got the wearable tech and the beard right. This hipster avant-la-lettre, victim of ‘Fashions of the Future’, was first seen vogue-ing around a World’s Fair Terrace Club party, his clothes quickly promoted by Bruehl’s ads for leading New York stores. Whether they appeared on the streets is moot, because Rhode was not a couturier but a designer of Art Deco and American Modernist metal furniture, lamps and clocks and heavily into plastics—Plexiglas, Lucite, Bakelite, and Fabrikoid. Quite likely the whole thing was a stunt.

Besides, his vision clicked with Bruehl’s earlier experience with GE, the manufacturer of American Telephone and Telegraph’s sophisticated  military radiotelegraphy devices.  The high-voltage props could have come straight from the factory Bruehl had worked in, and his studio photography orchestrates improbable blends of electric colours, toe-level viewpoint and dutch tilt, for sci-fi effect that would not look out of place in the low-budget Buck Rogers serial film produced that year by Universal Pictures which reused a belt worn by Flash Gordon on his trip to Mars, one not dissimilar to Rhode’s fashion statement.

Now what you’ve read above on Bruehl I’ve adapted from a comprehensive catalogue by then National Gallery of Australia curator Gael Newton for an exhibition In the Spotlight: Anton Bruehl photographs 1920s – 1950s ten years ago in 23 October 2010 – 6 February 2011.

In a fabulous career, working her way through several state and national institutions  researching, exhibiting and promoting photography, Australian in particular, Newton has been generous in sharing her hard work, much of it gathered for general access on her site photo-web, and in encouraging the efforts of others. She’s now in semi-retirement as a consultant, and tireless. I’d encountered Gael at conferences, but imagine my thrill, in my own retirement, when I discovered from Victoria Cooper and Doug Spowart that they had recommended me to her for a review of Edward Stokes‘ Marjorie Doggett’s Singapore for Trans Asia Photography Review. 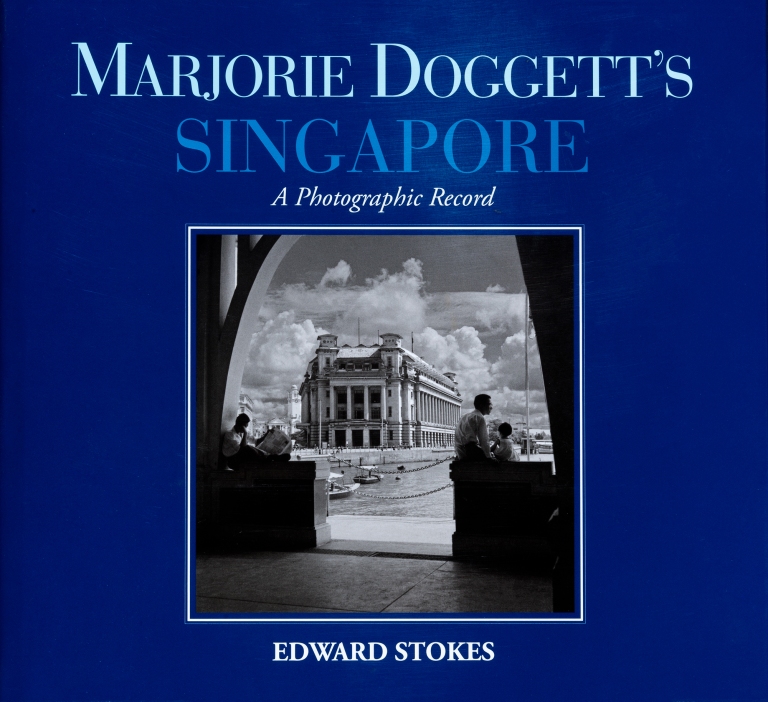 The cover image of the large-format hardback that I subsequently received in the mail is well chosen; a seductive view of the Fullerton Building, now a hotel, as seen across Singapore River in 1957. For anyone who has visited the island metropolis the image captures the relief of shade from the inexorable and fierce glory of equatorial light.

The image contents of the book are mostly more prosaic, so why is this book worth your attention? Here is photography serving what so many commentators have identified as its most valuable purpose; in the preservation or creation of memory, and in particular the recording of ‘heritage’, the etymology of which is from the Latin “to leave behind, abandon”. Bruehl shows us that photographing the future is a little foolish, but should you want to know what we can do with our photographs of the past, this book provides an answer.

Doggett’s motivation in undertaking her project, over the years 1955-1957, to document Singapore’s architecture, is uncertain. Eloping at twenty-six with her husband-to-be Victor to tropical Singapore, where he’d served briefly in WW2, must have been a leap in the dark from what must have been relatively comfortable youthful years in southern England. She had served as a nurse in wartime Britain and perhaps that is how they had met. Living in a garage she worked as a maternity nurse while he, abandoned  by an army mate in a would-be business venture, built a very successful career as a music teacher, having been bought up by his blind father who was a professional musician.

Doggett, with her only knowledge of photography gleaned from the local chemist back in Sussex, purchased a Rolleicord III twin-lens reflex, then a model V, and using only their 75mm lens pursued on a whim her unwonted self-assigned architectural photography. Walking the streets of the burgeoning city, its multi-ethnic population then approaching one million, she must have presented as just another tourist, but in fact she and Victor, through their occupations, were making more friends amongst the Chinese, Malay and Indian community than with British ‘expats’.

Working on this sole effort to record the white-painted monuments of British imperialism, the government buildings, the mansion, bridges, churches and schools, her photographs encompass also the mosques and temples, the river boats and ‘godowns’ (warehouses), the wider variety of architectural styles of impoverished Chinatown, and the Malay kampong across from their later bungalow home in Amber Road.

Doggett’s city is now dwarfed beneath streamlined towers but it lingers in her seventy-plus architectural photographs in Marjorie Doggett’s Singapore. Singapore is now the world’s most expensive place to live, but the ersatz tropical island beach at Sentosa is a sham of the sands of Bedok, not far east from their bungalow on Amber Road.

That ‘Arcadia’, roamed by beach-combing husband Victor and son Nick, was lost to the East Coast reclamation  which after 1969 added 405 hectares of land along the south-east coast for multi-storey housing, 18km of East Coast Parkway accessing Changi Airport, open space and playing fields. Her photograph of Bedok (above) is not a landscape but continues her investigation of architecture; the subject is actually the sea wall, the responsibility for the maintenance of which was much disputed, but necessary against the battering of monsoons and storms like the ‘Sumatra’ that we see approaching in her photograph.

Doggett may never have known that she was one of an army of women preserving heritage architecture with their cameras. Her contemporary Margaret Harker (1920 – 2013) is one example, who contributed to the National Buildings Record from its 1941 establishment against the threat of Nazi annihilation, by making in excess of 1,000 photographs now held by its successor body Historic England.

Doggett’s own efforts did not remain quixotic. In 1957 she published a book Characters of Light, revised and reissued in 1985. The title is ambiguous. It evokes the facade of a building etched boldly by the tropical glare, but is drawn from the jingoistic poem by Sir Stamford Raffles, written in 1823 in which he exclaims, “Let it still be the boast of Britain / To write her name in characters of light.” Subtitled ‘a guide to the buildings of Singapore’ it is not ostensibly a ‘photobook’, as we now call the genre, but a latter day Baedeker, a fingerpost to the past.

Doggett makes no mention of who might have inspired her work and she left behind no library. By contrast, author of Marjorie Doggett’s Singapore, Ed Stokes, founder and publisher of several books for The Photographic Heritage Foundation, and a photographer since the 1970s and also self-taught, “devoured photographic books”. Incidentally, but painstakingly, the book leads those who, like myself, have inherited an archive, through the process of preserving and publishing it.

A true amateur, both of photography and of Singapore, the place in which she and Victor spent their lives together, Doggett might be considered a photographic ‘outsider’, but also a guardian of the past that we, who come from her future, value all the more.

The review is now available for reading online