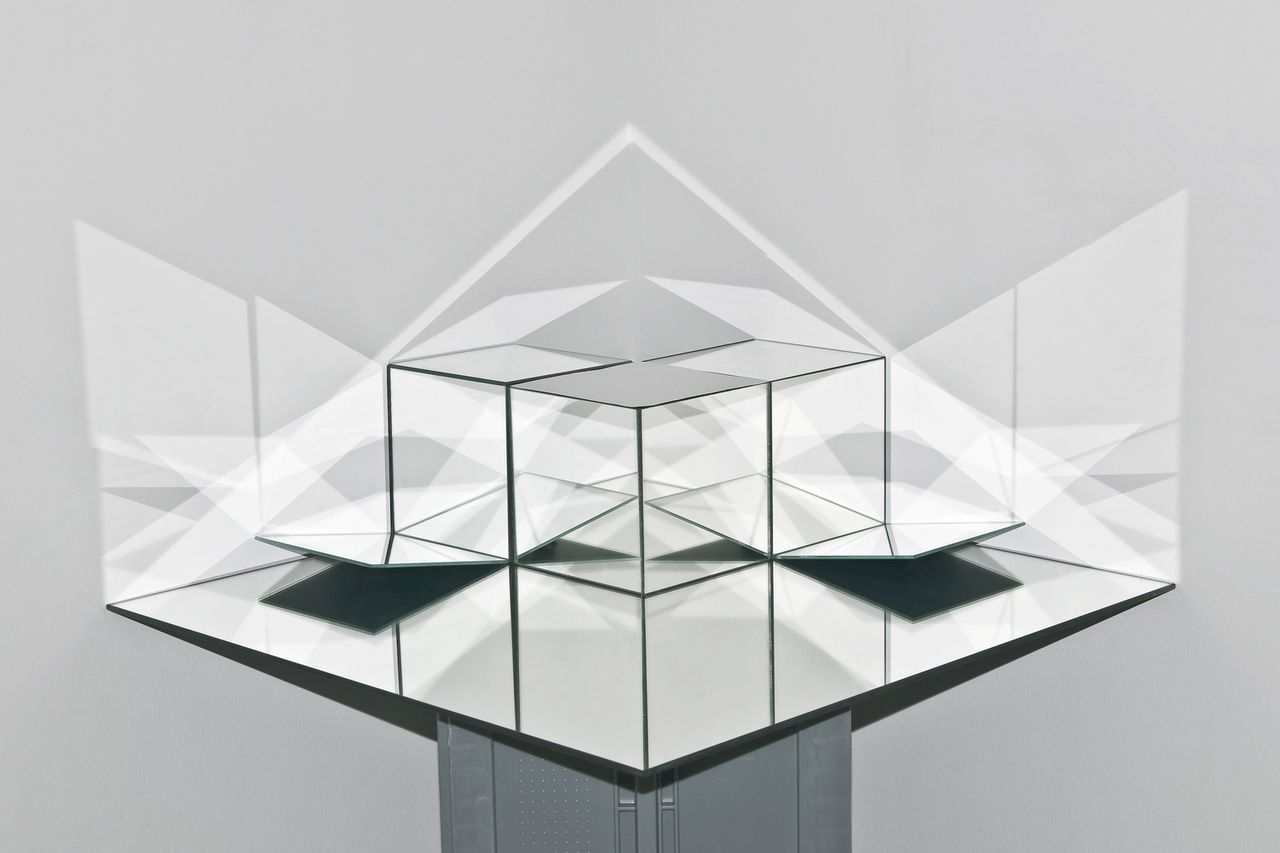 How deeply does Modernism reflect into contemporary art? A current exhibition is set up to allow us to explore such a question.

To mark the centenary of the founding of the Bauhaus, the Museum für Fotografie at Jebensstraße 2, Berlin is staging a visual dialogue between contemporary art and the photographic avant-garde of the 1930s in their exhibition Bauhaus and Photography: On Neues Sehen in Contemporary Art, running until August 28.

In Photography and Germany reviewed in my recent post Andrés Mario Zervigón notes the retrospectivity of German artist-photographers and conveys how the innovations of the Bauhaus and Neues Sehen have continued to be refracted through the photography and aesthetic concepts of today. We are shown the two eras side by side in a juxtaposition of historic works by László Moholy-Nagy who for the 1929/30 Werkbund exhibition Film und Foto, which toured Stuttgart, Berlin and Zurich, had likewise curated one room on the history of photography, and one on the future, including works shown here by Lucia Moholy, Man Ray, Jan Tschichold, Hedda Walther, Florence Henri, Hans Robertson and Erich Consemüller with groups of 21st century works by Dominique Teufen, Daniel T. Braun, Doug Fogelson, Stephanie Seufert, Kris Scholz, Taiyo Onorato & Nico Krebs, Antje Hanebeck and Douglas Gordon and some I have already visited here; Thomas Ruff, Wolfgang Tillmans, Max de Esteban, and Viviane Sassen.

The historical exhibition, Film und Foto, serves as a reference point in Bauhaus and Photography: On Neues Sehen in Contemporary Art and is represented with over 300 exhibits and a recreation of part of the Berlin exhibition with numerous vintage prints from the holdings of the Kunstbibliothek and films from the 1920s.

In looking at the work of contemporary artist Dominique Teufen, I am drawing together two threads here—the formal qualities exploited in Neues Sehen, and German and Austrian development of photographic flash.

Taking a cue from theatre special effects (immortalised in the hackneyed music-hall song Flash Bang Wallop from the 1967 movie Half a Sixpence) an early, and hazardous, flashlight powder is reputed to have used Lycopodium—the dry spores of clubmoss plants (above).

An improvement called Blitzlicht, a mixture of magnesium powder and potassium chlorate, was invented in Germany in 1887 by Adolf Miethe (1862–1927, also a pioneer in colour photography) and Johannes Gaedicke, while the first modern flash bulb was invented by Austrian, Paul Vierkotter who placed magnesium-coated wire, which had been used as illumination for photography as early as 1864, inside an evacuated glass globe.

The magnesium-coated wire was soon superseded by aluminum foil in oxygen so that by the year that Film und Foto was touring, the first commercially available photo flash bulb the Vacu-Blitzhad had just appeared, made in 1929 by the German company Hauff-Leonar AG from a patent by German, Johannes Ostermeier. One can thus understand why photographs illuminated with flash are rare in Bauhaus and Neue Sachlichkeit photography; flash synchronisation for the pocket-size Leica that so many of the students favoured was only introduced, with the Leica IIIf model, in 1950.

My second thread may be discovered with a superficial scan of this vintage installation shot of Room 3 of the original exhibition designed by John Heartfield and devoted largely to applied photomontage, to see much evidence of symmetry as a compulsive, hypnotic design element.

That modernist device is taken up and incorporated with the particularly photographic qualities of flash illumination in the work of Dominique Teufen. Go to her website and you will find links for her works of photography, but also for ‘Sculpture’, ‘Video’ and ‘Drawings’.

Follow ‘Sculpture’ and you will find a statement “somewhere along the way you lost me” and ‘Possible solutions 3’ which leads to a picture of a toilet in front of which is a pile of clothing, jeans and underpants pulled down but absent the human legs which should be inside them. Follow the link from ‘Drawings’ and you find the message ‘do not miss the point’; the message being that this is an artist who insistently asserts the primacy of the photographic in her art-making.

Exhibited in Bauhaus and Photography: On Neues Sehen in Contemporary Art is part of Teufen’s series Blitzlicht-Skulpturen which translates as ‘flash sculptures’, but immediately that poses an oxymoron; how does one make sculptures of light, let alone light so brief as to leave the subject of its illumination invisible to the human visual consciousness.

Her solution is as simple as the optical device—the mirror— adopted by several of the Bauhaus photographers, and (above) at least one of the textile students, Lotte Stam-Beese. In their studios innovators like Florence Henri could experiment with its charms and repetitions, reversals and inversions of space.

American-born Florence Henri’s 1929 still-life confounds us in its cubist layering of reflected and direct image and its combination of mirrors on horizontal and vertical planes that are combined with card cut into rectangles and discs—she was a member of the Cercle et Carré (Circle and Square) group of abstract artists in Paris, founded that year. Having met Lucia Moholoy at the Bauhaus in 1927 she had given up painting, in which she was earlier trained by Fernand Leger, to concentrate on photography;

“Now for some news: I’m taking photographs. If I enjoy it, I’ll give up painting (provisionally).”

Henri, by then running her own studio in Paris was hailed by her teacher László Moholy-Nagy:

“With Florence Henri’s photos, photographic practice enters a new phase – the scope of which would have been unimaginable before today. Above and beyond the precise and exact documentary composition of these highly defined photos, research into the effects of light is tackled not only through abstract photograms, but also in photos of real-life subjects”

The current exhibition Bauhaus and Photography: On Neues Sehen in Contemporary Art invites us to make connections between 1930s experimental works and contemporary art. Henri seems the best comparator for Teufen, though the mid-century modernist conducted her mirror experiments for only two years before moving on to more commercial work while for Teufen the device is part of an ongoing investigation into photographic vision.

László Moholy-Nagy’s phrase Neues Sehen (“New Vision”) captures photography’s uniquely modern visual language in the wake of World War I which rejoiced in the novelty of seeing the world through the camera lens. It was fellow lecturer Josef Albers who encouraged his Bauhaus students, including Stam-Beese, to use photography to document their work, and when Moholy left the Bauhaus in 1928, Albers began making his little-known photographs with the Leica I that he purchased that year; he never exhibited them in his lifetime and they became known only when John Szarkowski showed them at The Museum of Modern Art in 1988.

In contrast to Moholy’s innovatory cameraless imagery, negative prints and cinematography, Albers made no photograms nor any optical distortions, but pursued a pure photography. He expressed formal thoughts on the medium only in his 1943 Black Mountain College slide lecture titled Photos as Photography and Photos as Art, in which he used photographs he made in 1931 to demonstrate its flattening of space to distinguish between human vision and camera vision. In his 1963 Interaction of Color he uses a few photographic examples, in this case (left) to provide a real life example of the effect of tonal graduation to produce an illusory counter-effect in a continuous tone set against it.

The flattening that puzzles us in Teufen’s Blitzlicht-Skulpturen is the result not of any montage or manipulation, but likewise through a ‘pure’ or ‘straight’ photography and her attention to the inherent qualities of the medium such as the mis-en-abyme recession that results from her use of picture-in-picture;

The unnaturalness and ‘cut-out’ quality of on-camera flash is well known, and sometimes is deliberately exploited for bizarre or harsh effect. Teufen’s interest here is in the geometry of light. She places a bare flash head directly above her camera lens, as we can determine from the shadow projected directly under the platform of the trestles or plinths on which she constructs symmetrical ‘houses of cards’; ziggurats of unframed rectangular and curved or disc-shaped mirrors and panels of white or black card.

It is the single, fugacious flash which completes the work, which it does invisibly to the photographer at the moment of exposure. Reflections project and rebound, to once again be mirrored within these diamantine forms. Perspective is reversed as chevrons and splinters of light are splayed across the corner in which the construction has been built.

The forms at first glance seem a byzantine exercise in Art Deco, and thus an (apposite to the exhibition) revisitation of a style that was a decorative application of the modern contemporaneous with developments at the Bauhaus. On unfolding the puzzle they present, their spectral evanescence is revealed to be an ingenious play on the very mechanics of our medium.