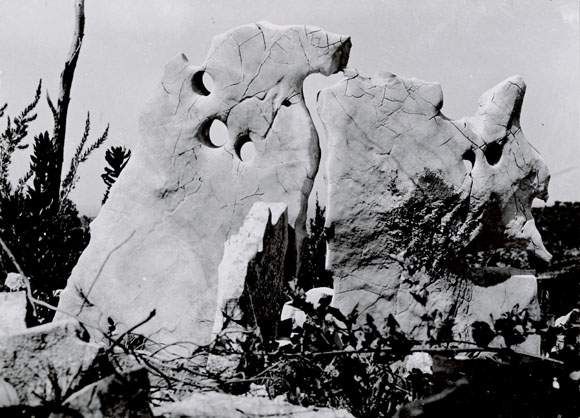 March 22: Photography and its associative potential may be freed by releasing it from the weight of literal transcription.

Do you agree that their pictures have something in common? Where does that come from when they are separated by nearly eighty years? 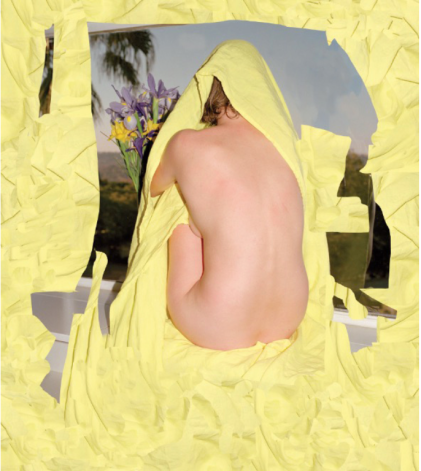 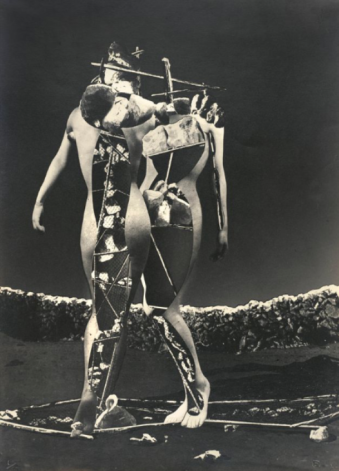 Ubac was a keen walker, a habit he took up in the 1920s to escape the loneliness and boredom his life as a secondary student in his home town of some 6,000 people. Later he was to undertake treks far afield in Europe, and to Paris in 1929, where he studied at the Sorbonne, adopting the gallic ‘Raoul’ to replace his name Rudolf.

He read and was impressed by the Surrealist manifesto and met the movement’s leader André Breton. The German painter Otto Freundlich convinced Ubac to move to Cologne where he studied at the on with his frequent travels. Ubac enrolled at the Cologne Werkschule in 1932 having taken up professional photography two years before, gaining sufficient income to enable him to continue with his travels. A trip to the island of Hvar (now in Croatia) resulted in some inspired imagery, photographs as well as drawings, of its weathered beach stones which associate them with the human form, a theme which continues throughout his Surrealist work 0f 1932-1939. 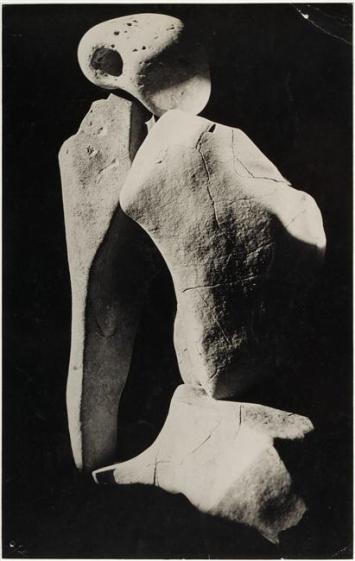 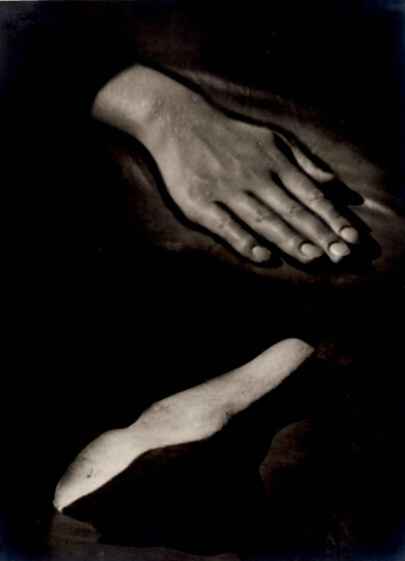 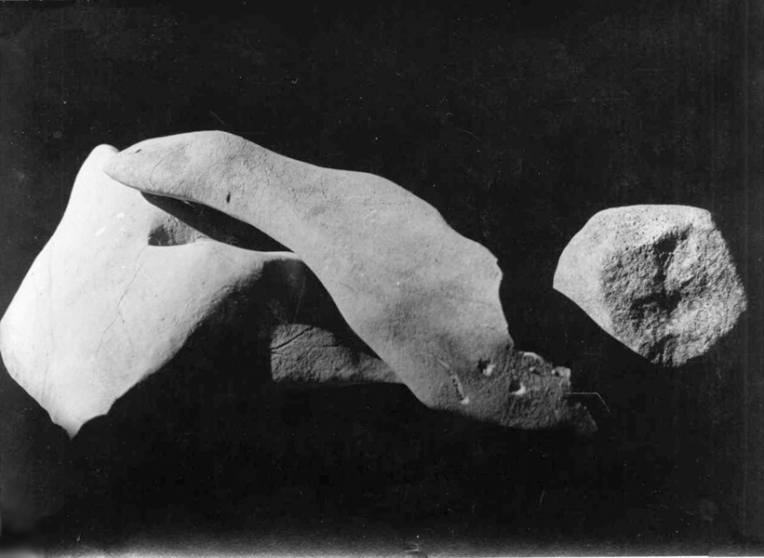 A meeting with Man Ray in 1933 confirmed his choice of photography. His ‘portrait’ of his wife Agathe Schmidt (‘‘Agui’’) was reproduced in the surrealist review, Minotaure, in 1938.

He produced numerous nudes depicting Agui as if she were lit from within. 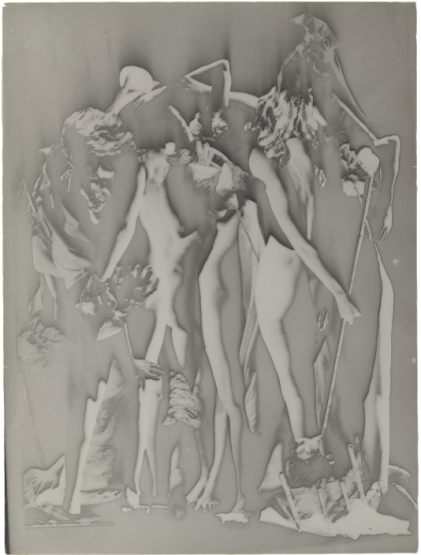 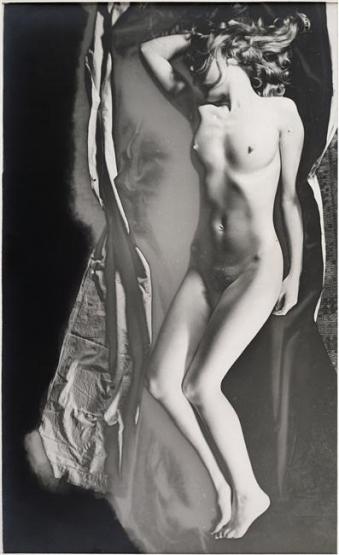 Man Ray claimed solarization as his own creative technique in 1929 but the effect had been known since 1857 when the Journal of the Photographic Society of London had printed a letter from one of its members, William Jackson, entitled On a Method of Reversing the Action of Light on the Collodian Film and Therefore Producing Transparent Positives, by which he had purposefully obtained positive images by exposing his glass plates to a faint light during their development. In 1862 when Armand Sabatier, a French scientist and amateur photographer, gave his name to the phenomenon in a paper published by the French Society of Photography. It was often called, ‘‘pseudo-solarisation’’ or even Sabatier solarisation to distinguish it from solarization caused by overexposure.

An account of her part in its artistic rediscovery was told by Lee Miller, Man Ray’s assistant, lover, model, and collaborator in 1975, though it is probably a fable:

Something crawled across my foot in the darkroom and I let out a yell and turned on the light. I never did find out what it was, a mouse or what. Then I realized that the film was totally exposed: there in the developing tanks, ready to be taken out, were a dozen practically fully developed negatives of a nude against a black background. Man Ray grabbed them, put them in the hypo and looked at them: the unexposed parts of the negative, which had been the black background, had been exposed by this sharp light that had been turned on and they had developed and came right up to the edge of the white, nude body. But the background and the image couldn’t heal together, so there was a line left which he called ‘solarization’.

Man Ray and Lee Miller used a dark background for their subjects to ensure an unexposed area to solarize, while softer lighting was used to enable the reversal exposure to work. Ray  tried to keep the workings of the process secret but his friend Maurice Tabard published the process in 1933 (causing a rift between them), and the technique was detailed in Photographic Amusements, published in 1937.

Theirs is just one of the many examples of misguided attempts by photographers to make a technique their secret trademark; an artist is remembered for ideas, not their technology.

Ubac himself developed other methods, such as (above) sandwiching a film negative to mask a film positive in printing his paraglyphes (bas-reliefs), that presented Paris as if frozen in time, as ‘fossils’ forever immobilized in rock relief. Published in Minotaure in 1939 they illustrated Benjamin Peret’s article about Paris in ruin.

In 1939, he created what he dubbed brûlages (burnings), obtained by progressively melting a negative.

Ubac produced imagery using such techniques that was in homage to De Chirico (La Rue derrière la gare) and Magritte (in La Chambre), and when he and Magritte were repatriated to Brussels during the war, together they published two editions of L’invention collective, in the second of which Ubac published his Les pièges á lumière (‘The Light Traps’). I have always found Ubac’s imagery entrancing as much as the idea behind them that is set forth there; the transformation of visual perception by photography by freeing it from the ‘weight’ of literal transcription. That is what makes Ubac so important, despite his slipping into obscurity after abandoning the medium in 1945 (he continued to create paintings, sculptures, etchings, and drawings) and being rediscovered only in 1975.

One of Nico Krijno’s 2016 works being exhibited at Beetles and Huxley resonates with Ubac’s sculptural rocks, the Pierres dressées de Dalmatie or Ubac’s cover for a book of poetry in which pieces of draped liver produce Daliesque results.

Both artists repeat biomorphic forms, copied from one part of the image to another with transpositions, erasures and cutouts.

Krijno grew up in the small town of Somerset East in South Africa and attended art school in Pretoria before moving to Cape Town aged nineteen, then working in the film and theatre industries and operating successfully as a professional photographer, working  with the likes of Nike and Levi, and with work featured in L’Officiel, Apartamento, Vice, Neon and Dazed & Confused.

His Veneer Wood Wood reveals his method; a pair or a series of shots of the same temporary studio construction at various stages in its making and from different angles are layered in Photoshop and then ‘eroded’ by brushing through layer masks. The process recalls the idea of sight as the peeling of layers from the object, that the subject may be worn away by our seeing it.

Not so much by deconstruction as reconstruction, Krijno entertainingly exposes the subject in time, exposing and suspending some parts and burying others. By exploiting the multiple layers of a photograph made available in Photoshop he expands on earlier work in which he would place sausages and fruit on a dazzlingly patterned shirts, or drop fruit into a swimming pool… 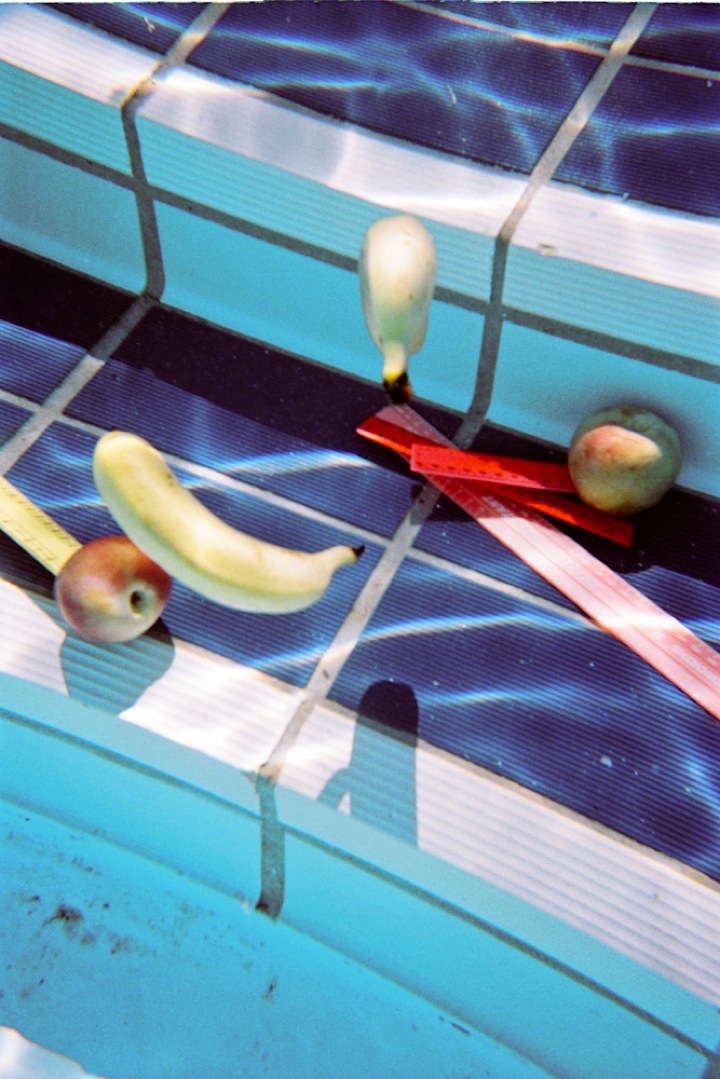 … or subject magazine photos to his own brûlage by photographing them as they burned, exposing charred pages an pictures underneath. 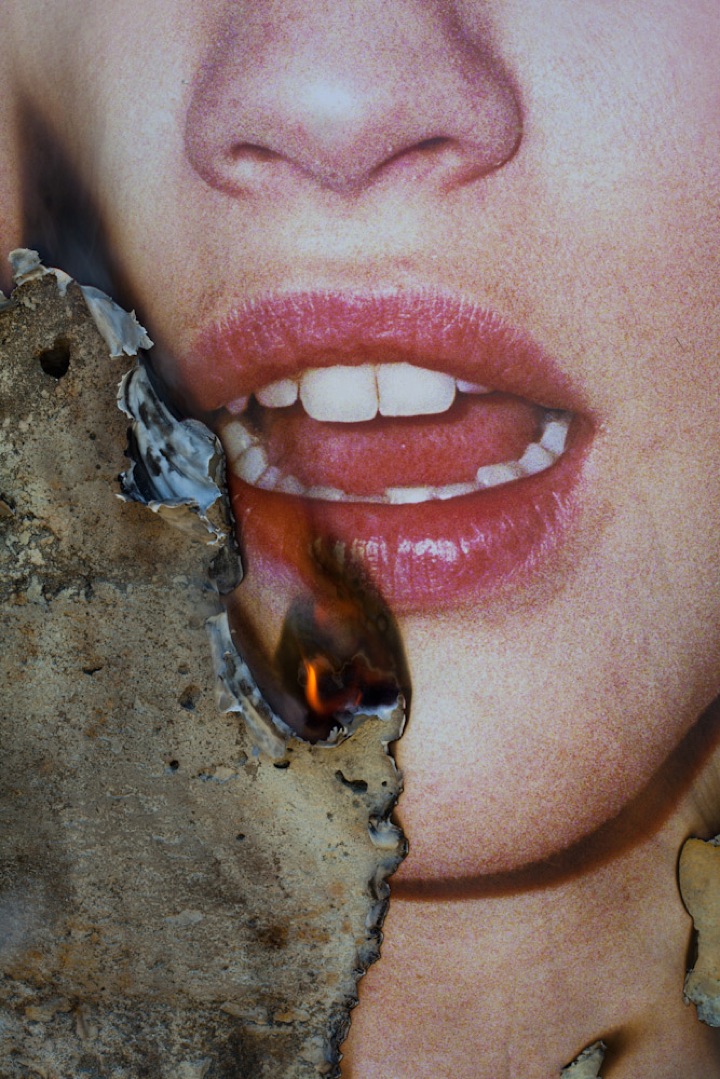 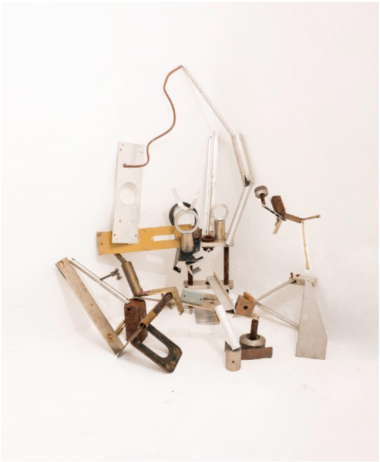 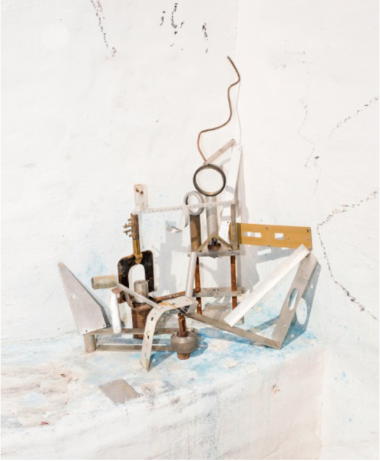 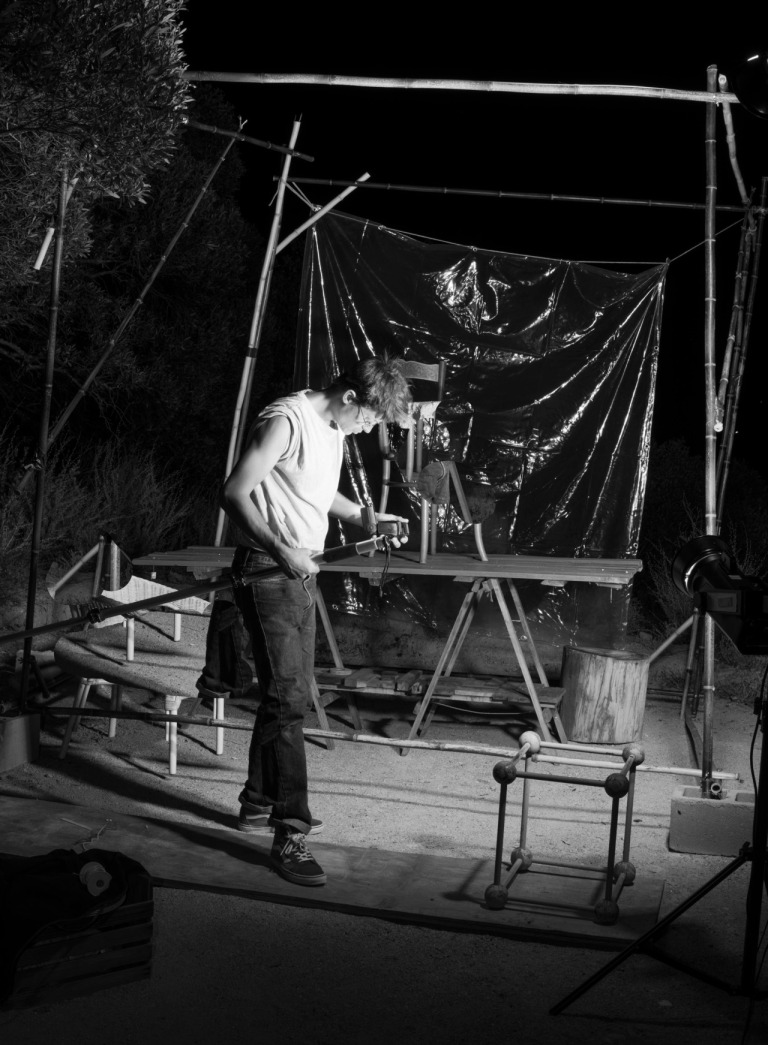 He operates his studio as a sculptor or painter does, a place of experimentation in which the same objects or images are available to be revisited and reworked constantly. 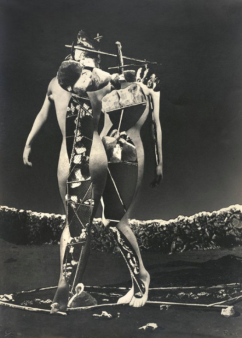 Ubac for his series Penthésilée, on the legendary Amazon queen, would rework an existing image, such as that at left, which already had been montaged from a picture of a nude photographed from two different angles then cut away to reveal an image of a wire and rock construction underneath.

He has collaged it with at least two images of flowing hair and also repeated the rear figure, entwining it with the first. The next step was to make a copy, then, taking his copy negative he has contact-printed it to make a positive film and sandwiched them in order to apply  his paraglyphe bas-relief technique. The image is then cropped more tightly that the original, and in some versions, is printed much lighter. By these ‘analogue’ (chemical photography) means he is more laboriously working in much the same way as Krinjo does in his Wendy House eighty years later. Both generate a sense of the image peeling away, eroding.

I do not know if Nico Krinjo would be familiar with Raoul Ubac or whether he would consider himself a Surrealist. He is part of a new generation of younger photographers who are rediscovering the still life. He is less concerned to convince us of an illusion, and it is not his intention to invite us into a dreamscape. He allows, in fact invites, viewers to participate in his making; the shape of the brush in his erasures is left unchanged in size and often is the positive shape amongst negative. 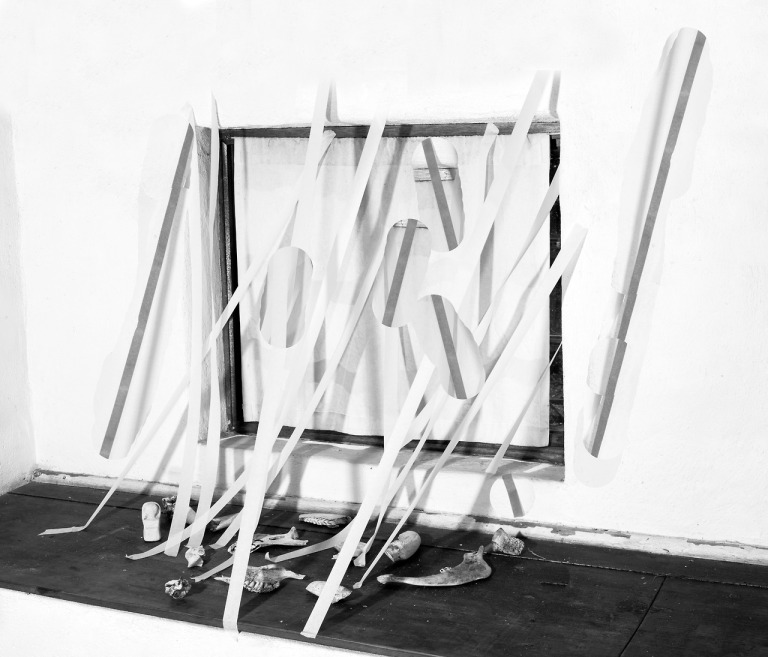 Copying and replication is likewise made explicit so that despite their digital origin, these are images have a rough-hewn, hand-made look.