January 5: The intriguing possibility of a cubist photography.

If there is such a genre, Jaroslav Rössler, who died on this date in 1990, came close to realising it, and 60 years before David Hockney, who began his ‘joiners’ in the prior eight years, with the landmark Pearblossom Highway appearing in 1986.

Cubism in theory cannot be photographic. The objects and views in a Cubist painting are syntheses of the real, visual propositions of things that may only exist as signs in the mind of the artist, and these are intermingled in the matrix of the work, with the brushwork, mark-making, collaged real objects and conventions of illusion, that contrive an image. However, representation remains apparent in a Cubist painting or sculpture even if it must be winkled out, whereupon one finds not one but a number of representations, each different.

Rössler had excellent preparation for his venture into photographic cubism and abstract photography, beginning in the early 1920s, having been mentored by Czech photographer František Drtikol, working for him as a laboratory technician. Drtikol practiced the bromoil process process in which one starts with a normally developed print exposed onto a silver-bromide paper that is then chemically bleached, hardened, and fixed. When the still-moist print is inked, the hardest (driest) areas take up the most ink while the wettest areas become the highlights, which enables the painterly manipulation of the photographic emulsion, to change tonality selectively and edit out or exaggerate elements of the composition.

In 1922 Rössler used it to create a cubo-futurist portrait of the Czech dancer Kulhanek with the exotic name ‘Ore Tarraco’, according to his fantasy and quite different from the living model. The Cubist appearance of Rössler’s portrait of the dancer is an example of the degree of alteration possible.

Karel Teige, artist, art historian and leader of the Czech avant-garde hired Rössler to create typographic layout for magazines Pásmo, Disk, Stavba and ReD (Revue Devětsilu), and recruited him into Teige’s avant-garde group Devětsil (literally “Nine Forces”). There he absorbed the techniques of photogram and photomontage. This example makes use of several printings through masks under the enlarge using parts of the same image of power pylons and wires, some of which are drawn in with pen and pencil to connect the lines.

This untitled photograph and Skylight above, both from 1923-4, reveal what the 22 year old had learned from these mentors. Skylight is a straight photograph, unmanipulated, an observation of found elementary, irreducible graphic forms of a ‘triadic’ Constructivist persuasion – a triangle, a more subtle rhomboid below created by a patch of light on the wall, and a line (the pull-rope leading into the skylight).

The untitled image is a negative, probably printed from a paper positive which has increased the contrast to the point where all depth clues in the hockey-puck shape of the low cylindrical bowl on the lower left have been obliterated, and graduations of tone become truncated, rendered as if shaded in charcoal. The incomplete forms allow full play for the Gestalt Principle to go to work in our perception of discs and globes.

In viewing both images we are almost satisfied to enjoy the strong abstract forms for their own sake and to forget that they derive from anything in the real world, though curiosity does persist. A positive version of the above may relieve that ‘itch’…

Studying in Paris in 1926 Rössler could not help but be influenced by the art that flourished there, and his visit coincided with the mature period of French Cubism, when Picasso’s return to the style after his Neo-classical period was resulting in more violently expressive and metamorphic works, with Juan Gris‘ most productive period before he fell ill, and when Braque was practicing a sweeter, more fluid style.

In 1927 Rössler returned to Paris with his wife Gertruda Fischerová (1894–1976), after a sojourn in Prague working on the illustrated magazine Pestrý týden (‘Colourful Week’) and for the next eight years was at his most productive artistically, before falling foul of the authorities during a demonstration and being jailed then expelled from France in 1935. He was occupied in commercial practice in Prague and only in the 1950s did he return to art making.

These images made by Rössler in Paris are either double exposures in the camera, or they make use of a prism that he began using around this time. It is more likely to be the latter because it would be difficult to achieve the lateral inversion in the left hand image with double exposure. If this is the case, the use of the prism would allow the photographer to see the effect in the ground glass of the view camera. The lighting is identical in each of the double images, which again indicates a prism, and in the left, the secondary 120º rotation of the apple appears to waver slightly as the view through the length of the prism distorts it. The graduated overlaps of his apple equate to a convention of shading in Cubist painting and is augmented by Rössler’s cross-lighting and ambiguous planes.

Rössler makes use of extremely shallow depth of field to graduate and elide the forms in this untitled image, interrupting the receding fields and line with the sharply focussed numeral 2 at the edge of the square frame.

The Cubist painters frequently stencilled numerals and letters on the surface of their works or imitated the stencilling of symbols. These may be readable as painted shapes or as signs for which we use a separate perceptual pathway, reading their concept rather than their shape. The stencilling firmly situates the symbol on the surface of the work, hovering at another level over any kind of spatial representation.

Is it possible to read Rössler’s ‘2’ in this way? He has angled it away from the lens, but there are few clues which enable the viewer to determine whether it is turned right or left. It is a clever photographic interpretation of a painterly device.

In the 1950s Rössler was able to return to his experiments after having been occupied with business concerns. Here his interest turns to the orthogonal perspective found in many Cubist works which permits a perceptual flip-flopping of spatial orientation, as in the Juan Gris work below. Here he uses with film to generate high contrast images of photographed or photogrammed objects so that they become abstracted from their original appearance. He uses multiple overprinting to create transparent layers and the Sabattier effect to partially invert the tones and outline the forms, contact printing the first generation enlargement to create a further reversal. 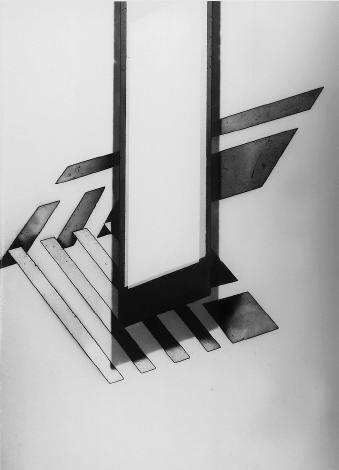 My favourite Cubist is Juan Gris, and I have made attempts to imitate his work. These are digital images, but only one uses software to create Cubist effects. This first is a montage of three different angles of view of this glass tumbler, the angle of sunlight varied for each.

In these others, made in the workshop of a local musical instrument maker, the guitar and ukulele parts presented me with readymade forms used frequently by the Cubists. Positive and negative shapes, the templates used by the craftsman, were ready to be photographed. Not yet assembled, the parts could be placed to imitate the way the Gris rendered space, with an awareness of the edge of his canvas as a reference to the fact that these are images, not the actual objects. The problem in photography is that the print is ‘transparent’; we cannot help ‘seeing through’ to the object itself which is rendered a simulacrum. My aim here was let play the ‘sign’ of the guitar to create the two levels of perception that take place in the Cubist painting.

Jaroslav Rössler in his 1923 Still Life with Small Bowl above, has used his keen and open-minded sense of observation to discover Cubist spatial effects in the studio. It is only occasionally that such things present themselves, or can be encouraged to emerge. Here is my own encounter with fortuitous Cubist-style counter-change generated by the lensing of water in a glass seen below a direct view through the top of the wineglass, alongside its distorted shadow projected from low sunlight angled from a mirror though the adjacent window.

It is certainly possible to generate photographs that look Cubist, but attempting to do so offers no better proof that painting and photography are two very different forms of image-making.