June 25: What strange delusion keeps the mirror world from our grasp?

At the Venice Biennale Michelangelo Pistoletto‘s One And One Makes Three continues until 26 November at the Basilica Di San Giorgio, Isola Di San Giorgio Maggiore, Venice. Born in 1933 in Biella, Italy, he is 84 today.

Pistoletto’s paintings pose paradoxes for photographers, insoluble questions that are nevertheless vital to our medium. These can be considered in this exhibition which surveys the artist’s whole career from to include both the most representative historical works from the beginning of Pistoletto’s artistic activity (1960) to the most recent (2017).

In 1961 he made a series self-portrait paintings on a reflective black ground entitled The Present for their capture through reflection of whatever was happening in front of them. The mirror image represented the search for his identity:

Who am I? What am I? How can I identify my existence through Art? Since I come from a totally figurative artistic culture, I took up my person as the image to identify. That is why I used the method of the self-portrait, which requires the use of the mirror. The image of myself, depicted life-sized, remains fixed in the painting, while the surrounding background has become a mirror. The world has entered the mirror transformed into a work of art and therefore my self- portrait has become the self-portrait of the world.

For us as photographers it is worthwhile contemplating in Pistoletto’s work his use of the mirror and in doing so replace ‘mirror’ with ‘camera’, and not merely as figurative comparison (with due respect to John Szarkowski in his landmark Mirrors and Windows: American Photography since 1960, MoMA, July 26–October 2, 1978).

We know too well now that the mirror is being replaced with the camera through its contribution of the ‘selfie’. Nowadays it is too easy to read his statement above as an egotistical declaration, but is that due to our acceptance, as the norm, of the ego-mania that drives the production of countless millions or ‘selfies’ every moment, the same insatiable desire of which Ovid wrote in his story of Narcissus:

Alas, this fatal image wins my love, as I behold it. But I cannot press my arms around the form I see, the form that gives me joy. What strange mistake has intervened betwixt us and our love? It grieves me more that neither lands nor seas nor mountains, no, nor walls with closed gates deny our loves, but only a little water keeps us far asunder. Surely he desires my love and my embraces, for as oft I strive to kiss him, bending to the limpid stream my lips, so often does he hold his face fondly to me, and vainly struggles up. It seems that I could touch him. ‘Tis a strange delusion that is keeping us apart.

So what is this strange delusion which keeps apart the reflected and the real self? How is it that we cannot enter the world in the mirror which is so like our own?

In 1961, on a black background that had been varnished to the point that it reflected, I began to paint my face. I saw it come toward me, detaching itself from the space of an environment in which all things moved, and I was astonished. I realized that I no longer had to look at myself in another mirror, that I could copy myself while looking at myself directly in the canvas. In the next painting I turned the figure around, because the painted eyes were still artificial, whereas those of the reflection could be as real as those of the figure that now was on the surface of the painting looking into the painting. In fact, being now turned in same direction as I was, it possessed my eyes. 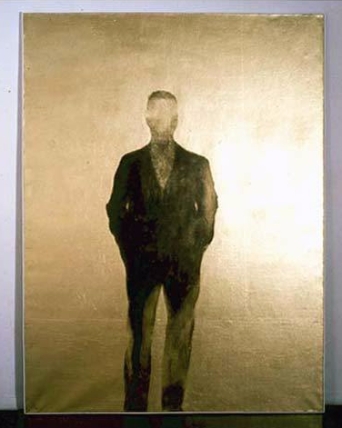 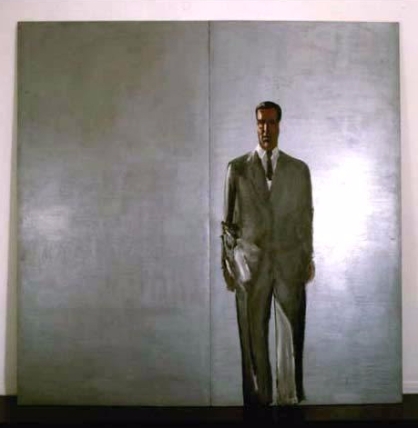 These were questions for Pistoletto as he experimented to make the background more reflective using aluminum sheets affixed to the canvas, but settled on mirror-finished steel. Cut out photographic images or photographic gelatin he applied directly to polished steel did not satisfy because the realistic photograph clashed with the ‘immateriality’ of the reflected image.

Conventional mirrors failed to work because of the thickness of the glass separating the applied image so that its rear side could be glimpsed at the edges. By 1962 the solution to marrying the image with reflection was mirror-finished stainless steel, and instead of a photographic print, a simplified tracing of a photograph on tissue paper, itself the most insubstantial painting support, replaced after 1971 with a silkscreen of the camera image, a mere film of ink.

Pistoletto’s use of the mirror was conceptual in a period in which the word was only just beginning to be a label of art. Through it he presents the dimension of time, not merely re-presented, but presented through the inclusion in the work of the viewer and his/her surroundings; the joining of opposites of static/dynamic, surface/depth, absolute/relative, activated by the interaction between the photographic image and what goes on in the virtual space generated by the reflecting surface.

He placed his mirror paintings on the floor to create a virtual passage between art and life from the space in which they are shown into the space of the work which is not an illusion, but a continuum, but solely a visual one, with reality. It provokes the poignant realisation that our reflections inside the mirror world appear to be able to see the other side of the painted figures, which we cannot, though of course they have only one side and are thus truly two-dimensional.

Three girls on a balcony, which reverses Manet’s painting of a similar subject, gaze into the space of a Looking-Glass world, the same as that entered by Alice, heroine of Lewis Carroll’s classic (who is Harold Dodgson, another photographer, to us). Alice is able to break this membrane where Narcissus cannot.

But what is it? To the hand it is a smooth unbroken surface, to the eye, especially when looking into Pistoletto’s peerless stainless steel, it is nothing. And yet, it transforms vision; it clearly is another reality because it is reversed laterally, but otherwise everything there is as here. Pistoletto’s addition of an illusionistic image, a mere two-dimensional sliver, serves as an intermediary between the two worlds;

…since I cannot enter it physically, if I am to inquire into the structure of art, I must make the picture move outwards into reality, creating the “fiction” of being myself “beyond the looking glass.”

If not in words, this strategy optically answers the question of surface in photography by revealing it as a notional threshold, a two-dimensional rendering that remains of the collision two worlds.

Pistoletto’s survey at the Basilica in Venice carries the plea that we ‘love difference’ and indeed it is that difference between the reflected and the real that he has loved in many manifestations thorughout a long career. In the show he takes the Mediterranean, represented as a mirrored table in cut in the silhouette of the sea, as the looking-glass across which we see the manifest difference that provokes the passion around the refugee debate. This is an idea that is derided in some reviews as “a crushingly obvious statement” or “corny“, the kind of remarks so commonly directed at any well-known career artist who is over sixty, though they evince an ignorance that social change has always been a motivation in Pistoletto’s art from his first exhibition in the USA which included images of Vietnam protestors.

The mirror paintings that brought Pistoletto international acknowledgement and one-person shows in Europe and in the United States (Paris, 1964; Brussels and Minneapolis, 1966; New York, 1967 and 1969; Rotterdam, 1969), still provoke a photographer’s curiosity about optics and the nature of the photographic surface.

One thought on “June 25: Reflecting”