March 26: Speed, that heady experience we covertly enjoy in our vehicles, also delights photography, the medium announced to have rendered laborious, time-consuming painting as ‘obsolete’, in a modern Age of Steam, as horsepower.

Two photography exhibitions being held during the Castlemaine State Festival contemplate speed; one is that of painter/photographer Michael Wolfe, in the foyer of The Mill Complex, 9 Walker Street, Castlemaine, whose ‘Festival-featured’ show has the support of the La Trobe Art Institute,  the Australian Government’s Arts Festivals Australia program, and The Mill Castlemaine. Wolfe appears in a Mike Reed portrait for the MAP Group project ‘Beyond the Studio’ of which I wrote earlier.

In this town of diverse demographics, known as much for its ‘Street Rod’ subculture as for its artists, the other show is by Darron Davies. You’ll find it in the old gymnasium at the superseded Castlemaine Secondary College campus which now houses the Hot Rod Centre Inc. who host the show. As I arrived, a yellow street rod was being tenderly loaded onto a trailer and a low-slung, grumbling black beast was snorting exhaust as it burned rubber on carpark asphalt. My expectations of a show billed The Big White Dyno. A salt lake that can be seen from space. Photography and stories of chasing speed, had subsequently to be revised.

The Central Victoria-based photographer was there minding his exhibition and explained that it stems from his pursuit of Castlemaine’s unique hot rodding car culture in a project he calls The Rodders. Associating with these  car freaks led him to the speed racing culture of the Dry Lake Racers Australia international ‘Speed Week’ on South Australia’s Lake Gairdner, to which he has returned over three years. I’m familiar with Kati Thanda, the site of some of my own work and that of the more celebrated Murray Fredericks. Gairdner is likely favoured over the still larger Kati Thanda-Lake Eyre because it is 250km closer to the state capital, Adelaide, nevertheless, it might as well be on another planet, as Davies declares;

“To say that this is like Mars is an understatement; an isolated massive salt lake within a dry red desert area, hundreds of people descending on the lake to locate a pit area, a starting lane, and cars and motorbikes reaching up to 700 kilometres an hour.”

I had excused myself to Davies already for my total lack of interest in cars, and he had confessed that he is not a car nut himself, but an ‘outsider’ looking in on this idiosyncratic culture. Consequently, not a single speeding car is to be seen in this exhibition (unless there’s one far away on the horizon), and after having my attention seized by one image, I found myself spending far longer than the five minutes I had planned to give the show.

The image above was the clincher for me. Here was a photographer with a vision that encompassed more than the facts of this subculture, such as the evidence here of the searing heat, and assurance that petrol-heads have a sense of humour.  It allows him to step back to find his viewers a broader, more nuanced view. 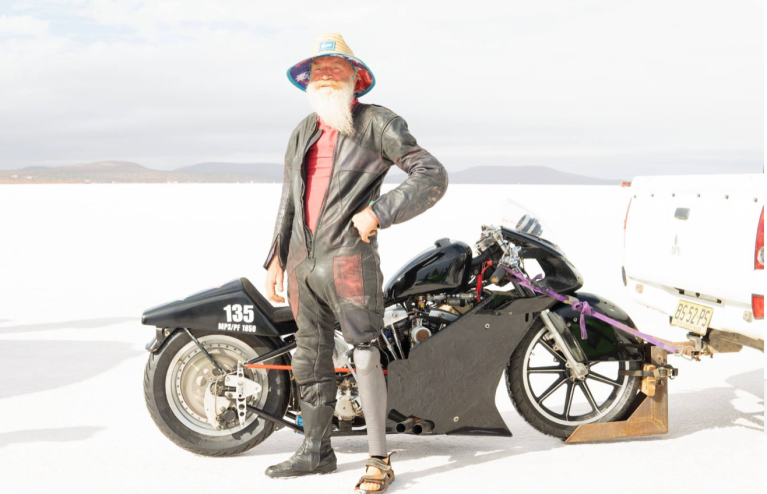 There’s no doubt that for Darron’s subjects this is a do-or-die experience requiring some bravery in the face of the danger involved in breaking speed records; witness the bearded amputee (a result of an accident on the lake) and the thousand mile stare of the salt-warrior in his cockpit. To the outsider however this might be an exercise in male egotism, exercised at great cost, and to what point? The artists among us need to remind ourselves that the same question might be asked of us! Stylistically too, there is a consistent exposure for the figures—almost exclusively men—which renders the salt toneless, so that it merges with the paper borders of the Davies’ prints. Upon this pristine ground objects and people seem to float. 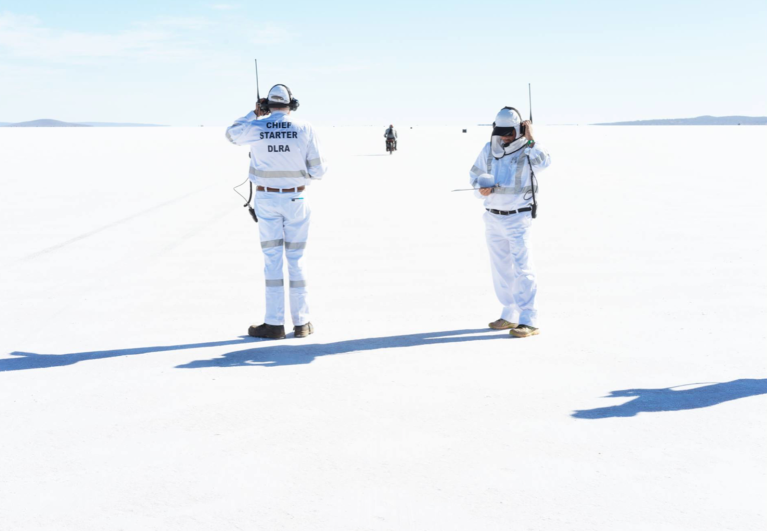 “My photos are a meditative exploration of this culture – an attempt to bridge fine art photography to speed racing. Poetic, classical, quirky…an outsider capturing the other-worldly nature of the event.”

The work will be on display util March 31 as part of the Castlemaine State Festival’s Open Studios program.

Also a Castlemaine artist, Michael Wolfe (who is not Michael Wolf) accompanies his show in the busy foyer of The Mill with a map of all the silo sites in Victoria, which incidentally traces the ghost of the extensive rail network that once was the circulatory system of the state, supplying, from lonely isolated sidings, its urban centres with grain for our daily bread.

Previous to the Silos series Wolfe, who is primarily a painter inspired by Fred Williams map-like paintings, and though he has been a darkroom photographer, used his iPhone with a series of apps and some Photoshopping to produce his recent, equally painterly, Inside Australia series. This he describes as “slightly wonky, distorted”, the result of using ’tilt-shift’ techniques for  a ‘miniature‘ effect…

Silos is a continuation of his studies of Australian man-made environment, following on from imagery of ephemera that attracts the graphic designer in him; “signage, packaging, typography, street scenes…”.

As you drive on back roads through the north-western plains of rural Victoria, it is only the silos that break the horizon, sentinels of the scant settlements around them such as remote Turniff Torpey’s Siding, or Mystic Park on the Piangil railway line. They approach your speeding car lumberingly, teasing your patience, disappearing behind scrub and rises, and promising a cuppa and a snack until, preceded sometimes by an ’80’ speed restriction zone, but rarely a ’60’ sign, you wizz past their silver or concrete flanks with not a shop or service station in sight, and on to the next monolith and another chance at habitation.

The red painted brick wall of The Mill Complex entrance, in an 1875 building patched up to become a carpet factory after a disastrous fire had gutted it 1981 and now refurbished and occupied by an antique and ‘vintage’ market, provides an appropriately industrial backdrop for Wolfe’s 1m x 1.5m inkjet prints.

Like other photographers before him, including Idris Khan who blended into one image every Bernd and Hilla Becher spherical gasholder picture, or the work of Corinne Vionnet or Neil Shirreff, Wolfe is intrigued by the potential of superimposing numbers of exposures through digital montage. In this instance the result is a vibration and perspective distortion that is apt to the experience of road travel, in which we view a roadside object in rotation as we pass. Especially in Bealiba (above) he replicates that motion perspective for a quasi-cubist interpretation of the industrial mundane.

Wolfe’s background as a designer and picture framer is evident in that each print is labelled in obsessive detail, providing information on the material used in the construction of the silos, their capacity and their map coordinates; both he and Davies are dealing with subject matter that is of interest to another culture tangental to the artistic.

Wolfe renders dynamic the static forms of silos, while Davies spurns the obvious seduction for most photographers in blurred pictures of record-breaking vehicles in motion, to reveal instead the contrasting stark stillness of the salt pan; an alien environment inhabited only fleetingly by speeding men.