March 23: What can compare to the black of a traditional silver gelatin print; the pupil of a lover’s eye, muscatel grapes beneath their bloom, raven feathers, burnt paper, deep water, the burnished iron of a cooking pan? Black beautiful, black baleful.

Glorious black lodged deep in the emulsion of the darkroom print by the action of light exceeds in quality any black that can be achieved through the inkjet printing of a digital file. The latter is merely a means of painting layers of inks over the surface of the paper and has nothing to do with light. It is ‘graphic’—a form of screen printing—but not photographic.

Our understanding of the process only came in 1938 when physicist Sir Nevill Mott, in his The Theory of the Photolysis of Silver Bromide and the Photographic Latent Image in the Proceedings of the Royal Society, described making quantum measurements to discover the way that light acted on electrons in the crystals of silver halides to form colloidal particles of metallic silver which are then amplified by hydroquinone in the development process.

One who knows and loves photographic black is Hitoshi Fugo (*1947), who opens a solo show ‘Blackout’ at Ibasho gallery, Tolstraat 67, Antwerp, Belgium. Two for whom black has an inherited significance are Hayley Millar-Baker (*1990) and James Tylor (*1986), showing at Castlemaine Art Museum during the Castlemaine State Festival.

Fugo is the man who every morning for fifteen years photographed his frying pan, inspired after one afternoon in 1979 when he was transfixed by the way light reflected from his kitchen window on its oily surface;

“I wanted to free myself thoroughly from the specific time, the specific place, and the relationships between the things and the place and even from the object itself.”

In titling his show ‘暗転’ (‘Anten’), Fugo draws on two personal experiences; as a child he suffered from asthma attacks which caused his consciousness to ebb away in a complete blackout of sensation, which he compares to the moment of blindness experienced by a photographer using an SLR who, pressing the shutter, is suddenly blinded as the mirror flaps up against the ground glass of the viewfinder. His prints are more than dark; even the spectral highlights, such as the reflections in this light globe, are printed with tone.

After Fugo studied photography at Nihon University in Tokyo he worked for Eikoh Hosoe, whose own predilection was for inky, high-contrast prints, then in 1973 freelanced in New York and Paris. It was in the 1980s and 1990s when he traveled  to India, Mexico and though the U.S. that he shot imagery that forms the ‘Blackout’ series. Most silver gelatin prints in the show are from editions made in the late 1990s/early 2000s,  though the extinguished lightbulb above is vintage. In all, black is used as a catalytic for the poesis of quite disparate subjects. Even where the subject is a snowy landscape, or white sheets, a quality of black predominates as the subject. 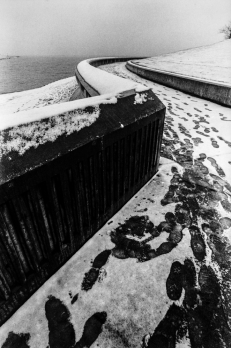 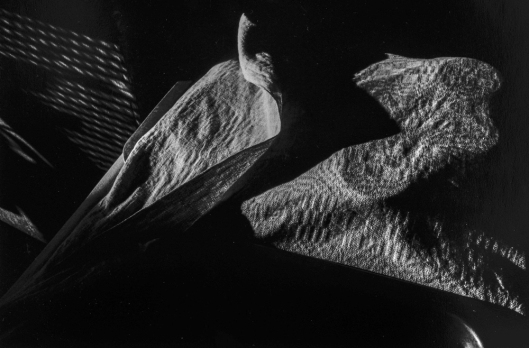 Castlemaine Art Museum, in choosing to present, in a black and darkened room, the work of James Tylor and Hayley Millar Baker in an ensemble hanging, amplifies their explorations of their individual historical legacies in contemporary context. Millar-Baker’s intensely worked photomontages re-tell personal and collective chronicles, and are set amongst Tylor’s disrupted landscapes to convey with full force their witness of invasion and destruction of a civilisation.

For those who attended the presentation at the Festival by Bruce Pascoe, a Bunurong man and member of the Wathaurong Aboriginal Co-operative of southern Victoria, this exhibition would reinforce his insights; in his book Dark Emu he contends that to represent the Indigenous peoples of Australia as hunter-gatherers is (as Tony Hughes-D’Aeth puts it) based on a radical, and frankly self-serving, misunderstanding, against which Pascoe assembles a persuasive case that Indigenous Australians farmed their land, lived in villages, built houses, harvested cereals, and built complex aquaculture systems supposed only to have arrived with Europeans in 1788.

Underlining our awakening to this knowledge is the arrangement of the exhibition. One walks into darkness through one of two entrances to the Higgins gallery to face a black-painted wall—the space appears to be void, a mere prelude to the Lyndell Brown and Charles Green beyond, though scant brown on black wall text seems to indicate there ought to be something in the room. Only on sensing light behind does one turn to find the assembly of the pair’s framed prints. They might be grouped, from left to right, into dwellings versus colonists’ walls, communal ethos vs. imposed religion, agriculture against desecration, invasion and massacre, though the arrangement invites further associations across its field. Alternatively, they can be read right to left, in the direction of the invasion from the eastern seaboard at Botany Bay, toward the inland.

Tylor presents, in (Vanished Scenes) from an Untouched Landscape, inkjet prints on hahnemuhle paper, each pressed against the glass of a deep box frame, and each with a rectangular or circular hole cut into it. The hole sits over a box lined with velvet so that it reveals nothing but a black void, an unfathomable, aching absence, echoing en abyme the placement of the show in a blacked-out gallery.

Interspersed amongst Tylor’s smaller prints are four photomontages by Hayley Millar Baker. Each is a complex assemblage of numbers of photographs, and while in each there is some subtle photoshopping, such as the blending of the join in the mirror image of the lower half of Untitled (The theft of the White men’s sheep), the constructed nature of the product—its craft—remains evident, to be retraced by the viewer in the same manner that a traditional tale will comprise repetitions that require the investment of its audience to piece together its narrative tapestry.

Hers is not a museum display however, and since we are (thankfully) without wall notes, and with room sheets are still to arrive due to the illness of curator Kent Wilson, we are left to guess at the stories, but they are easily discovered on Hayley Millar-Baker’s website and elsewhere.

Below, you are challenged in a game to find any sheep amongst the volcanic rocks. In fact, the work deals with the sinister Eumeralla Wars (1834–1849) on Gunditjmara Country—home of the photographer’s own ancestors. The Gunditjmara launched their attacks in revenge against the colonisers who were intent on eliminating them from ‘their’ landscape, an environment that was nevertheless inaccessible to the whites and used by the indigenes to their advantage to capture livestock from the colonists’ settlements as replacement of the traditional food stocks being denied to them.

Untitled (The best means, of caring for, and dealing with them in the future) redraws as a calamatous ruin the Lake Condah Aboriginal Mission Station, built in 1867 by the Church of England with the intention to ‘civilise’ the Gunditjmara people through a compulsory and brutal imposition of Western ‘education’ and Christianity. This on a civilisation whose spiritual values and ethics had been refined over a period of residence in Australia now estimated by archaeologists to be 100,000 years, compared to a mere 1,867 (vide Bruce Pascoe)!

In Untitled (So he mixed arsenic with half the flour and a raging thirst was created) Hayley Millar-Baker retells accounts of the Murdering Flat massacre of 1840 in which dozens of Gunditjmara people were poisoned by a hut keeper employed by the Henty brothers, who, frustrated by raids on his supplies, mixed arsenic into the bags of flour. The poisoned victims’ extreme thirst forced them to rush down to the Wannon River where they drowned from the effects of the arsenic. In Millar-Baker’s montage, the symmetrical ripples disturbing the waterhole trace the last throes of a body sunk beneath its normally placid surface.

The last of Millar-Baker’s works, if one is to read the installation left-to-right, recounts the earliest of her tales, that of the Convincing Ground massacre on Allestree beach, committed in 1833 by a group of whalers on a Gunditjmara clan. Innocently, the people had started to butcher the stranded corpse of a whale and, when discovered by the sailors who regarded this Portland beach as theirs, were killed, man, woman and child, all but one. This is the most subtle of Millar-Baker’s montages, with her only intervention, in a picture of a real whale on that beach, being perhaps her addition of a more dramatic clouded sky and the insertion of an overseeing Sun.

This is the point at which the two photographers’ imagery converges. The remains of the same wooden piles driven into the sand of Allestree beach appear also, photographed at right-angles from the left, in James Tylor’s image below it.

For those able to attend, a visit to this exhibition will bring discoveries of some of the most powerful and important visual art to be seen at the Castlemaine Festival. Though dwarfed in scale by the four Lyndell Brown and Charles Green mural works on perpetual war in the adjacent Stoneman room, it overwhelms theirs as a spectacle, and in its affect.

The team of Dr. Kent Wilson and Travis Hodgson of La Trobe University Art Institute produced these Castlemaine State Festival exhibitions. Aspects of Hayley and James’ work have been exhibited in separate solo exhibitions around Australia. Hayley and James worked together to create the impressive weaving of their work at CAM, in response to the complexities of the colonial style gallery and heritage walls.

One thought on “March 23: Blackout”