Today is the eve of the opening of the Castlemaine State Festival. I’ve lived here since 1988, and I enjoy the festival less each time it is staged every two years, despite its expensive offerings from performers national or international. Yes, I’m old, I may cope less well with change, but it is a fact; this event has changed from being a celebration of things distinctly Castlemaine, to it being yet another festival indistinguishable from dozens going on around Australia.

What does distinguish Castlemaine is its artists. When I settled here, I was invited to a meeting of the Castlemaine Artists Cooperative inside an old and surprisingly spacious brick kiln, which is now the Old Brickworks Gallery, open for the Festival at 15 Galway Street. There, I and any other new arrivals were expected to show our work for the critical reception of a group of committed artists of all media, and all with opinions that they were not afraid to express, especially about photography (‘is it art?’). The Co-op members provided a major proportion of the content of the Festival, in those days held in October to dovetail with the agricultural show and parade. There was a free-for-all to secure an exhibition venue in the available public spaces or vacant shops, and the free program would let visitors know where you were.

So where are we now, after 30 years? Well, on the Festival website (below) and in the program … last!—and not through the arbitrary application of alphabetical order, but because performance is deemed more worthwhile—it’s more expensive to commission after all (artists will show at their own expense).

Sure, the Festival issues an ‘Open Studios’ program for also-rans not lucky enough to be included amongst the select few sponsored artists, and on top of footing those huge costs of framing etc., they pay dearly to get a little ad into that brochure. Venues, now devoted to performance, are almost impossible to obtain, so artists resort to showing in the funeral parlour foyer, or give over their living space for a week, not because they will sell—they rarely do, given the volume of the week’s offerings for your wall above the couch—but because they want to participate, to ‘entertain’, to stimulate, to be seen by an audience bigger than the little town normally holds. Its century-old Art Museum is barely holding on, with minimal funding. Only this year, after 18 months hiatus surviving on volunteer management, it has hired Naomi Cass, late of the Melbourne’s Centre for Contemporary Photography who has the skills and experience to attempt its rescue. Art in, and of, Castlemaine needs all the help it can get!

That almost concludes my whinge, if you’re still with me, because the efforts of the MAP (Many Australian Photographers) Group have found a remedy, not wholly respectable, to this inequity. If you can’t get inside the walls of a public space to show your work; show it on the outside!

At the Town Hall, outside the Library or bank, the beer tavern, you can view this spectacle, night…or day!

As a proposition, the photographic portrait is an invitation to ‘get personal’. The portrait of a visual artist is a special instance of this intimacy, since in general, it is their work in which the artist and viewer is interested, quite the opposite of what holds with performers, of whom there are a few amongst the MAP imagery, though the subjects are mainly painters, sculptors, printmakers, a glass-maker, installation artist and so on, and a photographer or two.

Most are of my generation, some I remember being amongst my inquisitors in that old brick kiln three decades ago, and for us, being photographed can confront us with the less welcome signs of age, requiring a degree of courage that would not be of concern to a younger generation. “Why this particular selection of Castlemaine artists?” (that includes some ‘blow-ins’), one is prompted to ask. Are they being recorded before they ‘drop off their perches’? Or do they represent the ‘established’; the most valued for their experience and achievement? There are a much larger number of younger artists (some the children of these) who are equally accomplished, and really, how much avant-garde art is produced by sixty-year-olds? In the scant literature around this display I could discover no explanation of the selection process, though happily, participating photographer Brian Carr provides it in a comment at the bottom of this post.

The MAP photographers present us with opportunity to ‘get personal’ with them too. There are eighteen of them participating, each of whose approach to the portrait of the artist we can directly compare. These are big prints too, of a scale normally associated with advertising on railway station hoardings or in tram-stop displays, which tests their effectiveness in drawing the eye. They invite close inspection of technique. As well presented as they are, however, the images have to survive the inevitable degradation of this kind of printing process owing to the matt surface on which they are printed and the accidents of their pasting-up on an often uneven surface. Every image is monochrome, some by camera people habituated to colour, so that provides further grounds for our judgement.

I’ll abandon the grumpiness of my introduction to concentrate on two images that are outstanding. The first falls within that well established trope; the artist in front of their work. The portrait of sculptor/painter Lynne Edey by Naomi Herzog is so descriptive of both. We can easily disregard lumps and wrinkles and the slightly misaligned sheets of the paste-up, to admire the tonal and compositional qualities of this image. Lynne lives around the corner from me. I am at an advantage, as I know some of the photographers and many of the artists portrayed for this exercise, so I hope to provide some insights I could not normally give.

This tiny, wiry person has formidable strength that has enabled her to pursue her sculpture career despite a biography that would frustrate those less determined, and her sweet but persuasive manner has influenced this image. Herzog paid Lynne two visits. At the end of the first, she was happiest with a shot of Lynne standing against her studio wall among her tall cacti. Many of the photographers in this group have been conscious that their print would be seen on a wall, and so exploit the picture plane by including a wall as background, but it would be no surprise that the cacti summed up for Herzog Lynne’s gentle toughness. 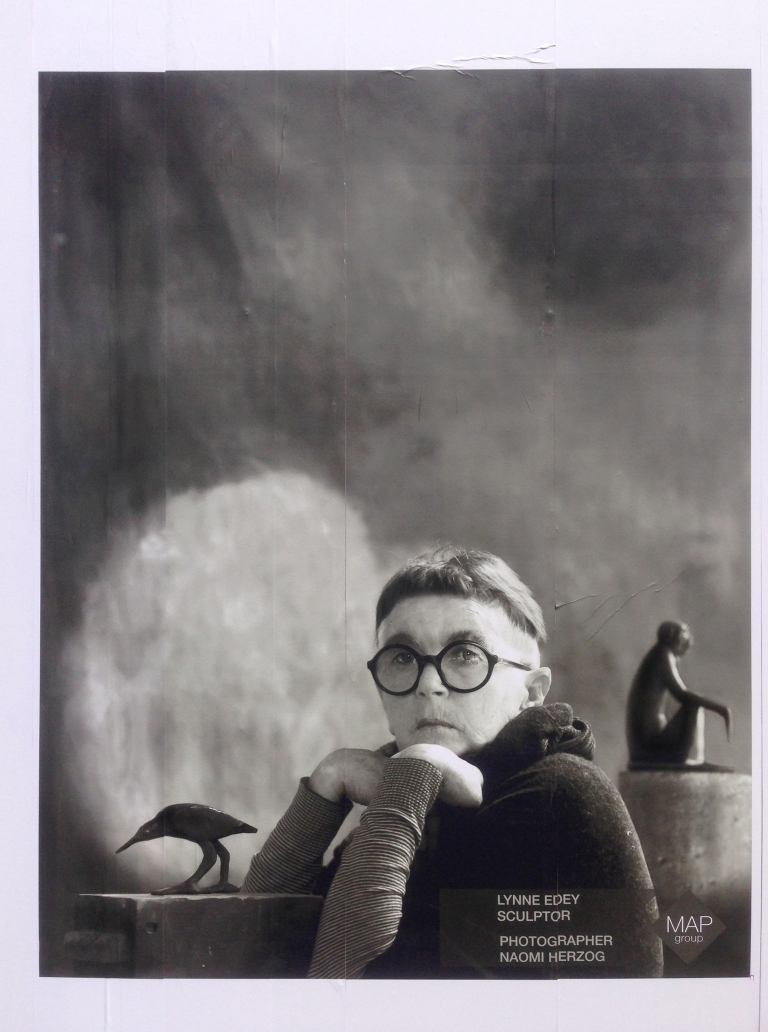 Yet here we can see that Naomi returned and listened attentively to her subject who loves the light in her studio, settling finally on the spot Lynne likes me (and others, I assume) to photograph her work (below). 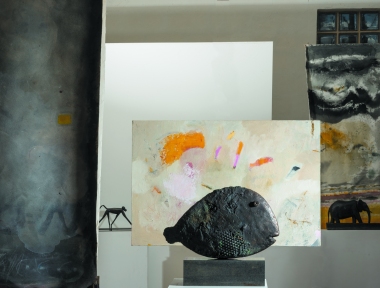 Herzog’s reshoot demonstrates that the most valuable asset for a portrait photographer is to treat their subject’s ideas as being as valuable as their own, learning where they feel ‘their place’ might be; that location which makes the most effective environment for them in a picture in which not just face and body are important. Herzog succeeds still in capturing Edey’s guarded pose and her tiny stature, but how much more is added! In the inquisitive bird which seems to peck at the boundary of the illusory ‘spotlight’—its own sphere in the canvas to which more than half the composition is allocated—we read the artist’s own insatiable curiosity and attention to the minute that animates her bronze creatures. The monkey behind her makes a perfect symbol of a past oppression that goads Edey’s prodigious artistic output. Though knowing the subject probably colours my reception of it, Herzog’s Lynne Edey was the most moving of all the MAP portraits.

Like Herzog, Tobias Titz is collaborative in his portraiture process, though more directly. With a large format camera, using Polaroid Type 665 film which produces both a print and a negative, he photographs a person against a plain background. When they step away he photographs the space behind them. Following this, the subjects scribe writing or a drawing into the ‘empty’ still-wet negative which when printed will produce black where they made marks. He prints these as a diptych, so that the subject’s thought or vision is mirrored by their face. Clayton Tremlett drily riffs on the concept with his blank portrait in a sketchily outlined traditional oval frame. It is an artist’s scrutiny of process, and his thoughtfulness about the next step in it, that we can read in his otherwise impassive face. As the head teacher in art at our Castlemaine Secondary College, Tremlett calmly excels in providing opportunities for students beyond the classroom while maintaining and exhibiting his vigorous art practice.

While the MAPGroup street installations are collectively titled Beyond the Studio and are included in the Open Studio program of the Festival, in the case of Herzog and Titz, the studio is still a presence in the image, improvised in Titz’s case. Others however take their subject into the goldfields bushlands, which is entirely appropriate in the case of Eliza Tree who lives by her the promise of her surname in restoring degraded or weed-infested sites on her own, or by organising work parties, on top of painting her map-like, mural scale works. Mike Reed, who photographed her, is responsible for the largest number of works in Beyond the Studio and despite (or because of?) his background in video, he brings a press photographer’s storytelling construction.

This is a truly ‘open’ exhibition which encourages a personal experience of people you may well meet on the streets of Castlemaine, or in their studios.