March 20: At what moment does an amateur photographer become an artist?

We can look to the early days of photography to see this happening in the biography of Andreas Groll (*1810), who died on this date in 1872, and by continuing to explore the offerings of the Castlemaine State Festival where today I spoke with Laura Myles at her ‘pop-up’ exhibition.

Born the son of a man-servant, Andreas Groll may first have come into contact with photography as a consequence of his employment as a lab assistant at the polytechnic institute in Vienna from 1845 to 1854. Groll worked with daguerreotypes, salt paper and albumen prints at the time, moving on from paper to glass negatives and, surprisingly for one with such a humble background, in 1850 published a scientific study Photografie oder Lichtbilder auf Glas (‘Photography or light pictures on glass’). The collodion process – the application of a photo sensitive solution onto glass which was exposed wet in the camera – is generally accepted to have been invented in 1851, almost simultaneously, by Frederick Scott Archer and Gustave Le Gray. Groll’s paper, even if it were practically unproven, shows that he, and Austria, were at the very forefront of photographic invention.

To put Groll in context, collodionists Francis Frith took his first trip to the Nile Valley in 1856 and Julia Margaret Cameron made her first photograph in 1861. They are big names, while Groll has only recently received a unjustly limited recognition.

Sometime in this period, Groll progressed from being a technician as the skills he learned enabled him to produce daguerreotype portraits, later exhibited in his exhibition in Vienna, and from 1848, calotype (paper negative) studio portraits, then calotype vistas of Vienna, made outside a studio, in 1849. His albumen prints (from glass negatives) appeared at the World Exhibition in Paris in 1855 and 1857 in Vienna.

He became dedicated to architectural photography of which around 1,000 examples of his work survive, a pioneer in that this was a novel specialisation on which he built a reputation that brought commissions and employment throughout the Austrian Empire, Germany, Italy, France and reputedly even in Russia, Spain and Egypt. He produced the earliest photographs of some of these countries’ significant monuments. This was the case with the Votivkirche in Vienna (above) a glorious neo-Gothic construction completed between 1856 and 1879 to give thanks for the survival of Emperor Franz Joseph after an assassination attempt. Others of his photographs (such as that below) were made as reference before restoration work began.

His images are beautiful despite the many faults, streaks, bubbles and uneven tonality that is evident in much of his work, faults that could befall a wet plate in the few minutes the photographer had to coat it, expose it and develop on the spot, in a portable darkroom, usually in a wagon or tent.

One of his most delightful images is of Stephansdom in Vienna.

It is made to show newly added tracery above the clerestory window gables which are shown as blank stone in a watercolour of 1847, seven years before, by Jakob Alt, whose painting (below) also shows that Groll must have lugged his collodion paraphernalia up to a rooftop to photograph across the wide square.

Groll’s St. Stephen’s Cathedral detail is a masterful example of architectural photography in which none of the verticals converge or diverge, which he achieved by keeping the camera absolutely level and sliding the lens panel of the camera upwards, but keeping it vertical. He thus captures the full height of the left-hand pointed arch and the glorious patterned roof tiles.

For Groll, photographing the interior of these glorious edifices would have been technically daunting. Laura Myles gives us a startling glimpse of their glory in her incandescent image of the somewhat more humble Marchmont St Giles Parish Church in Edinburgh, built only the year before Groll died.

We might enter these spaces with trepidation or reverence; Myles sees a giant camera, a camera ludens. This is a formative realisation.

It is also a revelation that demonstrates the progress of photography in the one-hundred and fifty-five years that have elapsed since Groll’s picture and Myles’, taken in 2010. It was a significant year for Myles for a eureka moment which she describes with a refreshing frankness and honesty and which gives wonderful insight into her transformation from amateur to artist;

In 2010 during an extended trip in Europe I made the discovery that all artists dream of; I found my own voice! Like most great discoveries it occurred by accident. This accident occurred in Strasbourg Notre Dame.

Her ‘accident’ involved using an unintentionally a long shutter speed that left light trails spiralling out of the church candles.

To make her landmark photograph it was not necessay for Laura to undertake the complex technical calculations and procedures that Groll needed to make his images; her camera did that for her, and now can most mobile phones. [Of course Groll regarded his equipment as the latest and best in comparison the slow mercury-based daguerreotype!] It was the technology of automatic exposure, plus Laura’s accidental movement of the camera in Strasbourg’s Notre Dame, perhaps as she walked away, that caused the effect. What is crucial is that she recognised it as artistic. 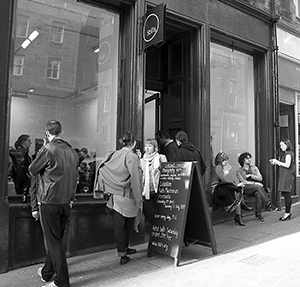 With her enjoyment of this special effect in mind, when she and her husband visited his beloved Edinburgh she took a short course at Stills, a centre for photography based in the heart of the city. There you can select from a number of short or long courses, some are only 5 hours long, some involve days, and even learn the calotype, or salt print, process invented by Henry Fox Talbot and used by Groll.

Laura, who is otherwise self-taught, was motivated to take the short course to obtain a better understanding of the artistic world of photography; “This experience helped me understand what it means to be a photographic artist.”

What emerged from this transformation was a specific vision that could be explored and developed as she continued on her tour of Europe; a method of photography that she calls ‘dancing with light’. No, it is not at all unusual for young photographers to try placing their camera on the dashboard of the car with the shutter open to record passing lights, which are recorded as streaks. We’ve probably all done something similar; a cool effect, yes, but one which may lead nowhere else.

By contrast, Laura’s trip around the Continent had a newly inspired purpose that produced shots like the one (above) made in the lovely Romanesque Abbaye Saint Sauver in Redon, France which is more than one thousand years old, though much of its glass is contemporary.

A stained glass window is quite different from city street lights in that it is a defined form surrounded, with the correct exposure, by blackness. In the image above, two figures merge into one painterly human form at the termination of a multicoloured streak of glorious colour that takes on a three-dimensional appearance. By planning where to place the stripes of light Myles is able to make full use of the black ‘canvas’ that the space around the windows, in the same church (below), provides.

Some of the ribbons of light created through long exposure form shapes in space, ‘geometric solids’ even, as in the case of Johannes Schreiter’s window in Heidelberg’s famous Church of the Holy Spirit, which displays a red-hot broken form that represents an atomic explosion, along with the date of the Hiroshima bombing that is visible here beside what becomes an ominous black candle in Laura’s sombre rendition.

In 2011, she brought her technique home with her to experiment in churches local to Castlemaine such as in these mandalas in which the forms are expanded and arrayed by racking out a zoom lens. Our churches are younger still, but still produce astonishing effects.

Some of the works remain figurative despite the movement, but it gives them a vibration that is absent in the original, as here in this image from the quiet jewel-box Anglican Church in Maldon (built 1861). The subject, as if alive, swings his lantern through the lower half of the image against the abstractions of light on the stone jamb. 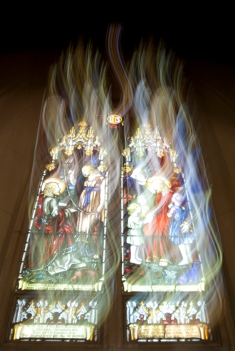 Laura Myles has been exhibiting at every Castlemaine Festival since 2011 and locally elsewhere, and is still pursuing her technique with images this year made in the local churches. It is this dedication that will bring further evolution in her approach.

Her current exhibition Perspective is being held in the foyer of the undertaker Thompsons’ at 123 Mostyn Street (which directed my mother’s funeral), which is quite apposite to Laura’s motivation in her work. While she professes to no particular religion, Laura acknowledges the spiritual potency of her subject matter. It is the experimental energy of her treatment that transforms the literal religious content of these windows into fundamental forces of light, energy and darkness, and that transforms technique into art.

While some, like Marian Drew, another Australian, draw with light, Laura makes it dance.

One thought on “March 20: Transformation”