February 23: Silence and stillness as embodied in the photograph is a potent idea.

The term ‘still’ is one we use for the photograph, and it derives from the use of photographs to advertise movies—the moving image—the conceit being that the ‘stills’ are lifted from the movie, are ‘stop frames’. Of course they are shot on set by a specialist stills photographer who directs the shots for their own camera to produce a condensed version of the action, and who appears in the movie credits as among the creative and technical crew involved in cinema production.

In this photograph of a familiar director and actor, we see him sitting in a ‘dance café’ in what was then the red light district of Hamburg, in contemplation, perhaps watching the drama of the Reeperbahn behind us. A pane separates us from him like the glossy surface of an 8″ x 10″ print. The photographic plane likewise removes all sound and immobilises Alfred Hitchcock’s famous features as if in a museum vitrine, in suspense. What is he thinking? Who has just arrived behind him?

The picture is dated 1963. Perhaps it records Hitchcock after he had arrived in Germany with composer Bernard Herrmann, on December 14th 1962 to oversee the progress of the electronic soundtrack for The Birds that was nearing completion. Later they had lunched in Hamburg with Czech actor Anny Ondra (who had worked on Hitchcock films in 1929) before, late that month, the director was joined by his family to travel on to Paris and then St. Moritz for Christmas.

Hitchcock didn’t return to Germany until September 1963 when he traveled to promote The Birds, but not officially to Hamburg. Clothing more appropriate to spring rather than winter may indicate this latter date for the photograph. Max Scheler (1928–2003), who is the photographer, was working for Stern, and since making Hamburg his base since 1959 for his many overseas assignments, had been photographing the Beatles during their various stints in clubs along the Reeperbahn, and two other 1963 pictures by him show Hitchcock also in St. Pauli. Either way, this little bit of research into the circumstances of the picture indicates the director’s mind is humming with thoughts of his landmark movie, though he may really be acting the part of himself for Scheler’s camera.

I’ve added a voice-over—background noise to our picture—just as movies do, but contemplate just the print, and the silence is eerie, uneasy. Unlike the other two publicity images we cannot know if Hitchcock is even aware of our footsteps outside his window. 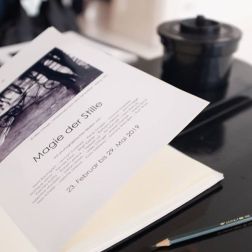 Stille, the German word for both ‘silence’ and ‘stillness’, appears in the title of a group show of twenty-four contributors, Magie der Stille opening 12-4pm today at Johanna Breede gallery at Fasanenstrasse 69 D, in Berlin, continuing until May 29. With a thoughtful catalogue essay by journalist, once also a blogger, Ralf Hanselle (*1972), it considers the abundant relations of silence and photography,  and English adds a further connection to the film still, a genre that Scheler’s oblique portrait conjures.

The photographer’s father was philosopher Max Scheler senior in whose thinking the very phenomenon of silence suggests that rather than being a negative—the mere absence of something—silence is in fact complex and positive. For him, writing in his Wesen und formen der sympathie 1913 (translated by Peter Heath in 1954 as ‘The Nature of Sympathy’) the fact that persons, ‘can be silent and keep their thought to themselves…is quite different from simply saying nothing. It is an active attitude’.

That father died and son was born in the same year, 1928, and that they never knew each other, represents another, profound and sad, instance of silence. It perhaps accounts for Scheler’s first following in his father’s footsteps to study Art History, German and English literature at Munich University and the Sorbonne, during which he was assistant to photographer Herbert List (1903–1975), whom he had met during the war in in 1941. It was Scheler who inherited List’s estate and so energetically promoted it in books and though exhibitions in Europe and the United States, preserving it from oblivion.

List too appears in the exhibition which marks ten years of shows at Johanna Breede, many of which have themes equally inspired, and clearly as curator, she is attracted to the intense mystery like that in work of Jens Knigge whose solo she assembled in 2016 (and whose sinuously infinite Northern Roads, shown at the head of this article, is featured in Magie der Stille), and List’s 1944 Kammermusik, Wien (‘Chamber Music, Vienna’, above), which Scheler may have printed.

Kammermusik is one of List’s more overt expressions of surrealism compared to the more subtle notes of it that we find in his later work that is tempered by a Bauhaus influence via his friend Andreas Feininger and his love of Greek antiquity. Though his style varies, hands are a frequently revisited subject, and here, in the depth of WW2, he resorts to posing the prosthetic, plastic hands as might hide the stumps of a war veteran, disembodied but alive to a plaintive musical impulse. In this still life, humble white furniture is chosen for contrast as a stage set for their phantom, inaudible, performance.

The end of winter in Germany approaches, and many of the images in the Breede exhibition feature snow, the element most associated with quietude in the landscape. Two of the most striking feature birds and, appropriate to that creature, they evoke music. In a more original and poetic take on the oft-repeated image of birds on powerlines, as a representation of the musical stave Hannes Kilian (1909–1999), from his experience as a virtuoso ballet photographer, in a quiet moment finds the staccato footprints of birds in snow on a staircase.

Breede has made thoughtful selections from her holdings to create visual echoes of silence throughout the show in complementary images, such as this pair completed by the marching Antarctic penguins of German documentarian and filmmaker Thomas Hoepker (b.1936).

He made the widely circulated ‘end-of-times’ shot of September 11, 2001, of hipsters relaxing during their lunch break along the East River while a huge plume of smoke rises over the water from Lower Manhattan after the attack on the World Trade Center; its silence a gasp of incomprehension in the face of inconceivable horror. His penguins, far from human evil, play a joyful, noiseless arpeggio on the pristine expanse at the end of the world.

The latest work in a show with images dating from 1944 onward, is Algerian-born (*1958) French artist Isa Marcelli‘s fantastical fish of 2016. Through this image shot with a soft lens, we seem to be immersed in a watery domain to experience that sudden silence of the depths. A photographer only since 2008 and an adventurous one who experiments with Polaroid, pinhole and large format cameras, she has found success with even the more difficult; palladium, cyanotype, and recently gum bichromate, tintypes and wet collodion on metal processes.

Koichiro Kurita‘s Zen simplicity encourages the eye to slide more slowly beneath the serene surface where silence is broken, barely, as by a twig on the brink of a perfect waterfall. Scale, proximity and proportion are left to float. He too uses alternative processes; Platinum Palladium on Japanese Gampi paper for this exquisite print; and he is inspired in his reverent restraint by Thoreau’s Walden Pond.

These are classic images, many rarely shown, including more below, and all desirable, brought together with discernment.

Let me now be wordless, like Vera Mercer‘s (*1936) Marcel Duchamp, as you enter into their contemplation…