March 5: A role that intrinsically belongs to photography is to preserve what is vanishing.

Opening today is Schicht und Striptease by mid-century documentary photographer Herbert Dombrowski (1917-2010) at Museum Kunst der Westküste, in the small town of Alkersum on the quiet German island of Föhr, between the Danish peninsular and the North Sea.

It is an appropriate venue for 70 photographs from Herbert Dombrowski’s investigations of daily life of the 1950s in Hamburg in the depressed harbour suburb of Altona on the Elbe, which was heavily bombed by the Allies in WW2.

As the German economy recovered, the area was to be renovated by the housing association “Neue Heimat” which commissioned Dombrowski to record the affected area in Eastern Altona and St Pauli, between the train station Holstenbahnhof and the Elbe river. There he photographed the shipyards, the fish market and the ballrooms, clubs and bars of the Reeperbahn, a street housing the entertainment district in Hamburg’s St. Pauli district.

A liminal place, physically, culturally, and morally it had arisen as a guild-free zone just outside the city gate at Millerntor, and the name of one of its best-known side streets, Grosse Freiheit, where the Beatles were later to get some notice, inherits a legacy of both trade and religious freedom.

The neighboring Heiligengeistfeld (Holy Spirit Field) served as a plague quarantine and a dump in pre-modern times, and St. Pauli had long been home to “outsiders” of all stripes, as well as the tough working class of the quarter’s backstreets; the same harbor that generated Hamburg’s burgher elite was a magnet to the immigrant, the stevedore, the sailor, and the prostitute. 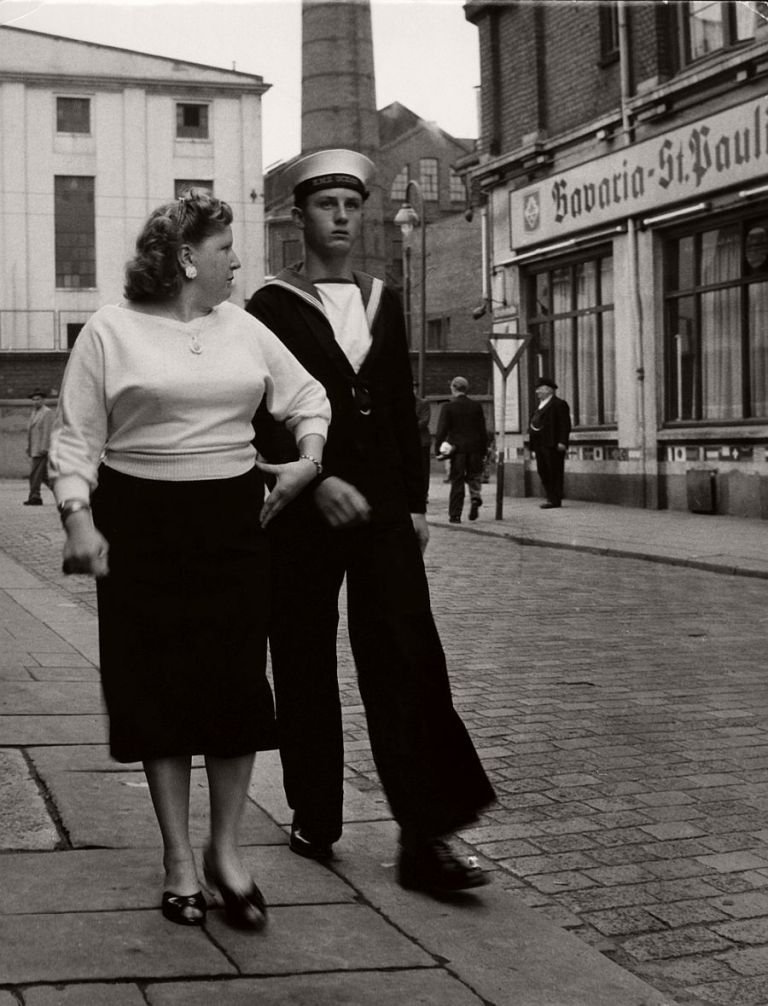 Herbert Dombrowski was born in Hamburg in 1917 and started to take pictures as a high school student. He was 19 years old in 1936 when his image of SS St. Louis was published on the cover of the magazine Reclams Universum, but went into hiding when being persecuted in the anti-Semitic Nazi period, then was imprisoned, losing everything except his Leica camera. With it he began work as a professional photographer immediately after the war from a small studio in the borough of Eppendorf. Over the summers of 1949 and 1950 he worked as the beach photographer in Timmendorfer Strand, a resort at the Baltic Sea. It was that experience that taught him how to deal with human subjects.

His documentation, begun in 1954, represents the last of a pre-war society, with quaint workers’ terraces and cottages, chickens pecking in the street, street markets and housewives chatting on their doorsteps and children paying on the cobblestones; but he also shows the tough conditions of emergency and temporary housing and men scrounging rags and bone to scrape a living. 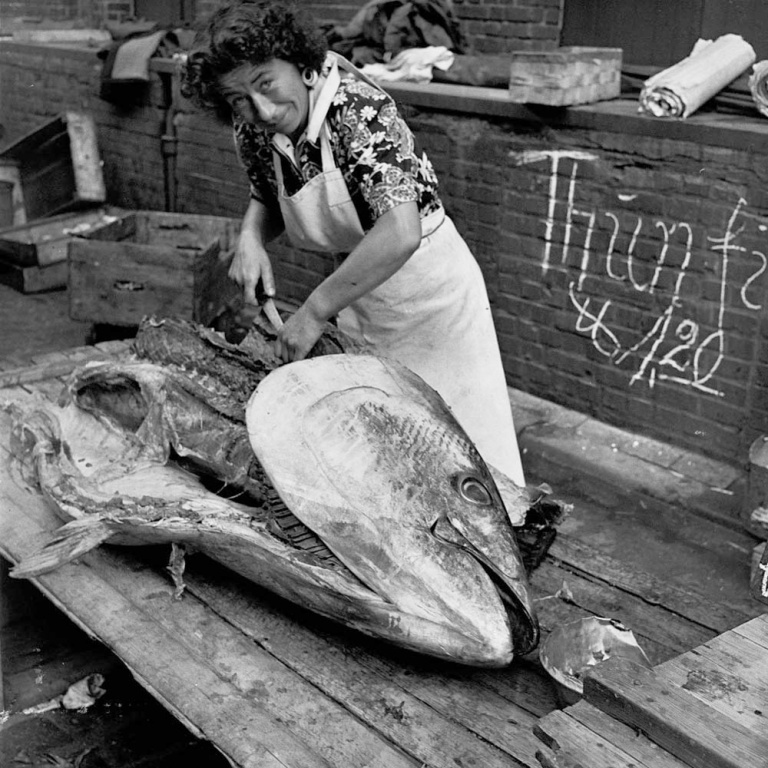 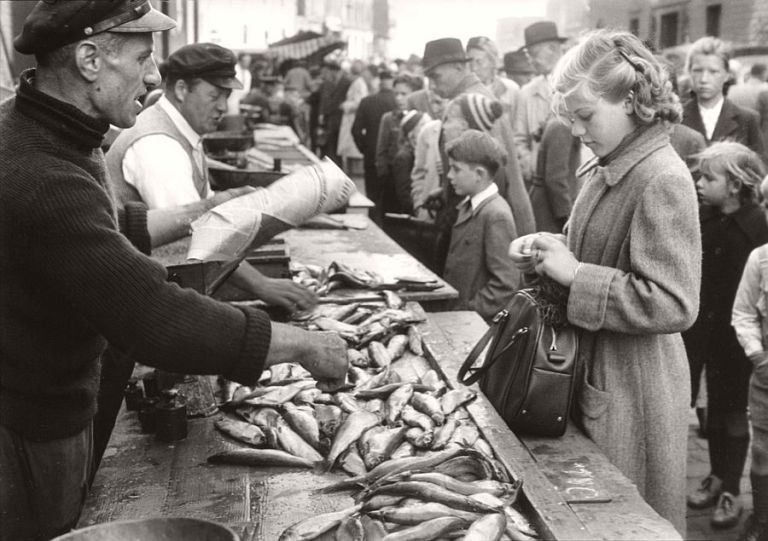 His mission is not unlike that of Eugene Atget; an attempt to preserve a layer of the city before it was erased. 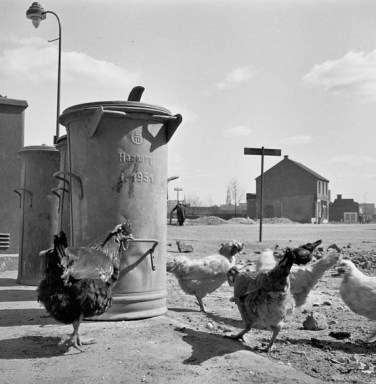 Visitors flocked to the Reeperbahn from all over Germany seeking solace for stresses of the present and forgetfulness of the sorrows of the past, and spent some $25 million annually. Dombrowski was there, and created an invaluable record of the Reeperbahn, the main artery of the St. Pauli harbor district, the centre of a nightlife described by Fodor’s guide 1959 guide as “the most roaring” in Germany.

Hamburg’s “sinful mile” had a long tradition as a place where sailors, musicians, bartenders, showgirls, gays, gangsters, and prostitutes, and some 13,000 St. Pauli residents (many of whom were immigrants) rubbed elbows with tourists and natives ‘slumming it’ to see amazons wrestling in mud, ‘beauty dancers’ stripping on stage, posing naked for a split second in the dimming spotlight, and to watch horses drink beer and smoke cigarettes at the Hippodrom.

Prostitutes had been tolerated since the Napoleonic occupation, and their numbers did not reduce during the National Socialist period, though a substantial Chinese community suffered persecution. 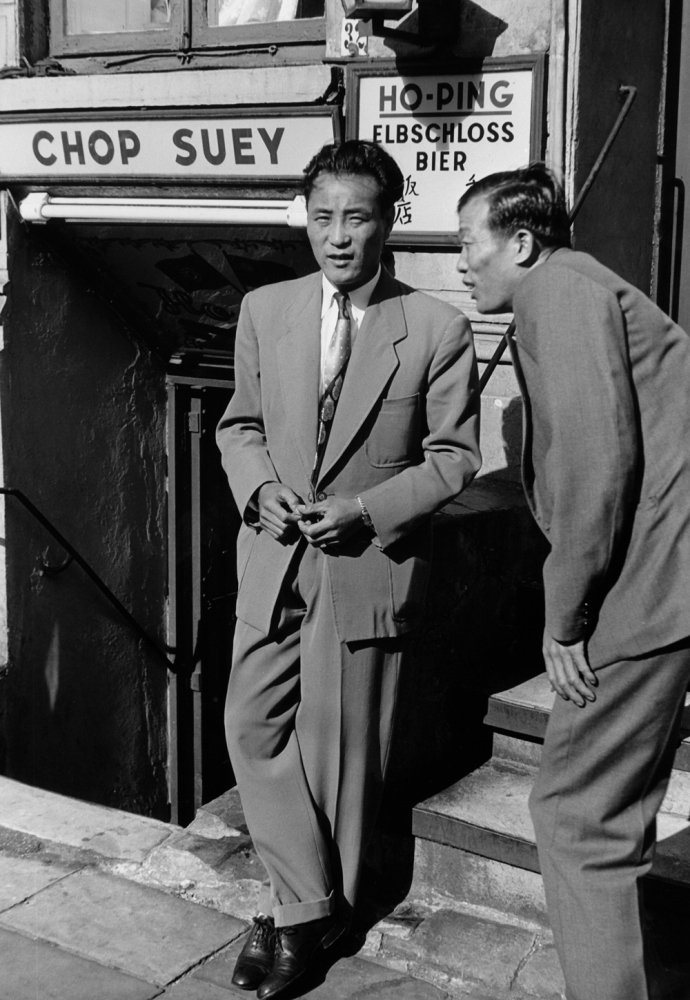 With over 60% of nightclubs destroyed by bombing in WW2, the fifties saw a revival and the opening of new clubs with ever more varieties of sexualised pleasure and entertainments. 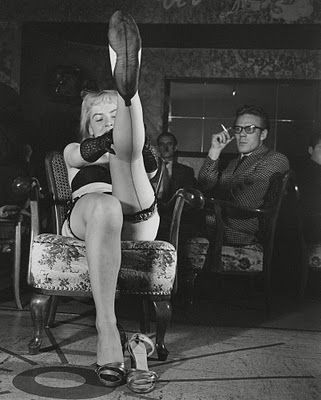 What is remarkable about Drombrowski’s images is his fly-on-the-wall…or floor, or ceiling…stealth and unremarked proximity to his subjects. His images are intended as a contrast to the poverty he documents amongst the slums of Altona. 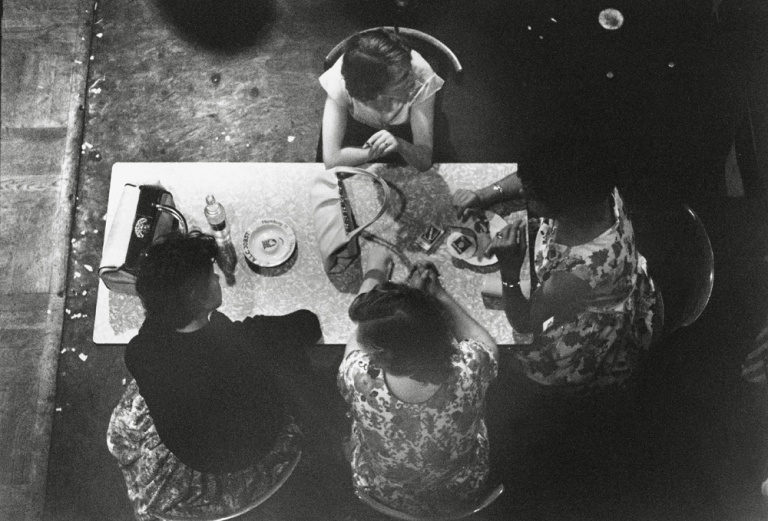 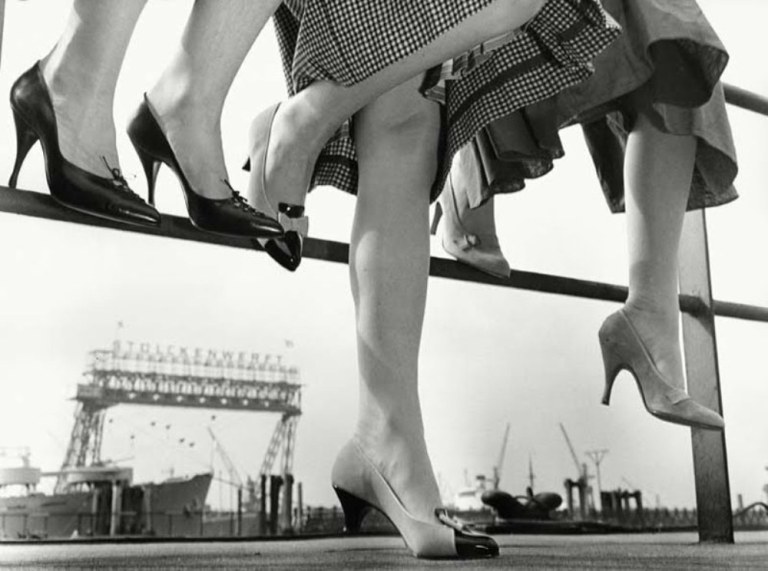 After having created a through documentation of this disappearing part of Hamburg in 1956 and until his retirement in 1985, Drombrowski worked freelance for BP, ESSO, BMW, Rudolf Otto Meyer, United States Lines, Agentur Wilkens, Hambuger Journal, Stern und DER SPIEGEL. He died at ninety-three years old on the 13th of May 2010 in Hamburg.

A book of his photographs Das Herz von St. Pauli: Herbert Dombrowski, Fotografien 1956, with text by Willi Bartels was published in German by Dölling und Galitz in 1997

One thought on “March 5: Vanishment”