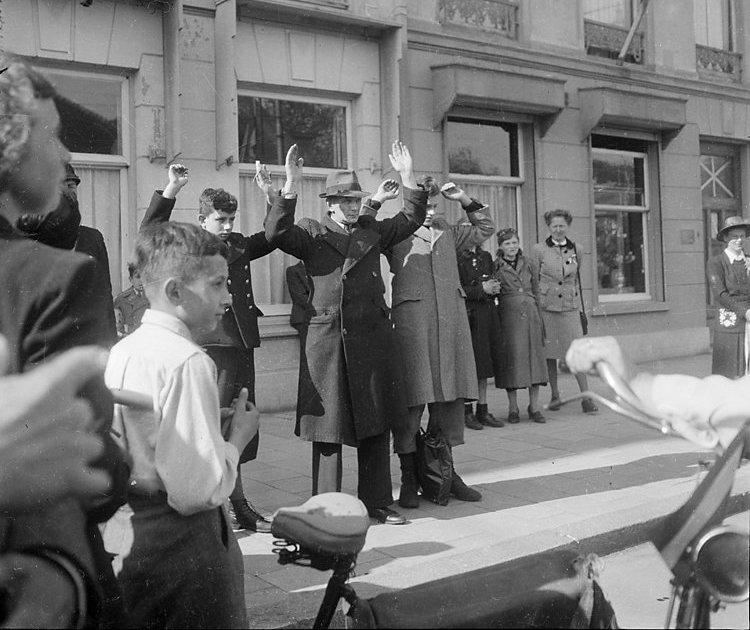 January 24: The street photograph is the genre of many historical practitioners and with passionate followers. Whether it has contemporary relevance, when privacy is more generally guarded and considering the ease of digital imaging, is much debated, but one has only to look at older examples to be impressed by one of its almost inevitable attributes; it encapsulates its era as no other type of photograph can.

Cécile Machlup was born in Vienna in 1868 and died today in 1938. Active in photography from 1907 on she excelled in gum prints, bromoils and autochromes which she exhibited in the 1930s as far afield as in America. Few survive, but we luckily can enjoy her views of Italian streets. Ary WG Koppejan (†2013) born on this date in 1919, was an amateur photographer whose significant achievement was to record the social consequences of the end of WW2 in Den Haag in the Netherlands.

John Gay was a German émigré who fled the Nazis and became a successful photographer in London, living there till his death on this date in 1999. His output was prodigious, as a search among the 40,000 pictures he left to English Heritage, and made available at their Viewfinder website, will reveal.

Trained as an artist, he showed talent for making intricate silhouette cutouts which manifests in his photography in a fascination with contrasts.

Born Hans Gohler in Karlsrühe, he became interested in photography when he left school. He attended art school in Paris and worked as a photographer in Germany before leaving Germany in 1933 in disgust at Hitler’s treatment of the Jews (though he was not Jewish himself). He settled in Halifax, Yorkshire with the family of a friend Walter Stern. The Sterns became his adoptive family. He worked there as a photographer, taking the Augustan English name John Gay, after the poet (1685-1732) whose Trivia, or The Art of Walking the Streets of London takes its name from the “Goddess of crossroads”, Trivia and is so apt to our John Gay’s photography (published in 1964 as London Observed). In 1942 he married Marie Arnheim, a painter, who had come to England in 1936, and who was one of two sisters of Rudolph Arnheim (1904–2007) whose contributions to the psychology of art, aesthetics, art education, and media studies are seminal.

From 1942 Gay was based in Hampstead and Highgate, London, and worked as a professional photographer contributing picture stories to Country Fair.

For The Strand magazine, before its demise in 1950, he also produced a number of portraits of literary personalities in the 1940s including Enid Blyton and publishers Victor Gollancz,  Geoffrey Cust Faber, and ‘Billy’ Collins, chairman of Collins, as well as actors and artists.

Known for his atmospheric, light-filled pictures of railway stations, graveyards and country scenes his output is more English than that of even his UK-born contemporaries, though his eye for idiosyncrasies and British eccentricity, while not as acerbic as that of Tony Ray Jones or of Martin Parr, nevertheless provokes a smirk. It is his capacity to work unobserved in public with his medium-format 2¼inch square twin lens camera that interests me.

These observations of old men in their natural habitat exhibit his more gentle humour. With their flat caps they could be mistaken for the same person, so stereotypical, and so invisible to other than the photographer, are they. 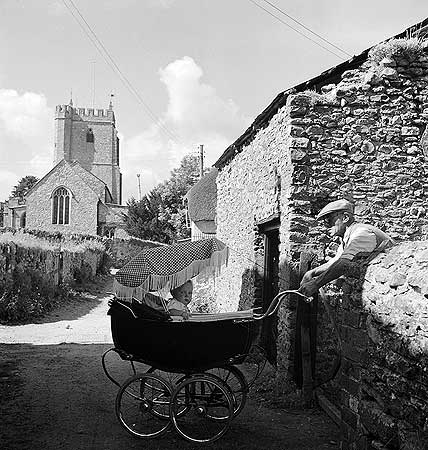 John Gay (1955 – 1965) A village scene showing a man with a flat cap leaning over a gate at Craven Cottage, Culmstock, to rock a baby in a pram, with All Saints’ Church behind 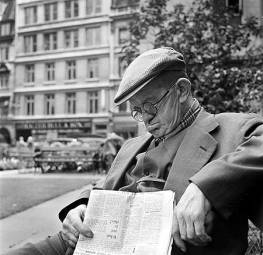 Others of his images exhibit a sharp eye for class differences and racial tension. This West Indian woman buying fruit and vegetables at an open air market is unconscious of (or studiously ignores) the hateful glare of the man behind her; a situation that John Gay, an immigrant himself,  would himself have encountered.

The young teenager from a private school, handkerchief tucked neatly into his jacket pocket, passes a group of less well-heeled brothers playing with a stallholder’s cart at a Bethnal Green market. His fixed and irritated scowl is one he will no doubt carry into adulthood as he moves into a managerial role.

In Great Missenden (coincidentally, home of Roald Dahl’s BFG), in the dead of winter, Gay discovers a homeless man sheltering by the side of the road in a makeshift tent. Engaging the tramp as he warms his hands at his fire, he takes a number of frames. Both subject and photographer are subject to the cold in the feeble winter sun, but a fellow-feeling is communicated.

The narrow streets of Gorizia, a town in northeastern Italy at the foot of the Julian Alps bordering Slovenia, are the subject of Viennese photographer Cecile Machlup’s bromoils. At the time these pictures were made Gorizia was part of Austria, in the Austrian Littoral, so quite accessible to a wealthy Viennese photographer. 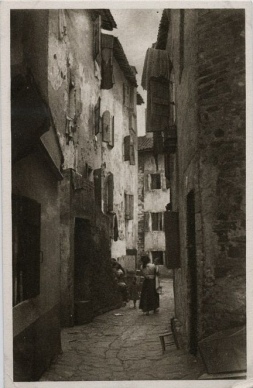 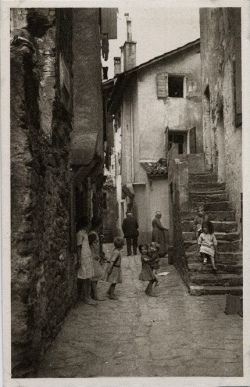 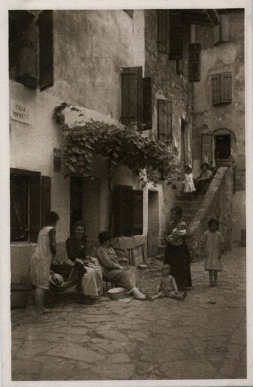 Cecile had married the industrialist Berthold Machlup in 1892 and from 1901 spent  summers on their estate in Styria in northwest Austria, bordering Slovenia and this may explain her trips to Gorizia 250km away. Machlup took up the camera in 1907 and became a member of the Viennese photo club, der Arbeiterfotografengruppe des Volksheims Ottakring, and its only woman.

“Photography is my goal for life, my life’s purpose and the joy of my life” she is recorded as saying in the catalogue to the art photography exhibition Styria, organized by the Amateur Photographers’ Club and the Kunstphotographischer Vereinigung, in Graz, May – June 1912. From the show the Museum of the City of Vienna bought one of her pictures. The ‘worker-photographer’ group was directed by Karl Irribauer, succeeded by Karl Ender from 1928 onwards, and held weekly events: photo lectures, courses, photo excursions. An exhibition was held annually in September. The members were not revolutionary workers’ photographers but serious-minded bourgeois amateurs. Machlup went on to become an honorary member from 1927 for her genre pictures and children’s portraits, and the quality of her bromoil printing.

The people on these ancient narrow streets and alleyways are mostly women and children, and were subjects she was well used to photographing. These appear to be posed scenes that she has orchestrated to grace the urban or village scenes once her presence with a camera has attracted subjects.

A statement made around this time seems to indicate that she is convinced that using the smaller 6×6 format released her from the need to use bromoil; “in properly exposed and perfectly developed negatives an improvement with bromoil is superfluous”

Vintage examples of Machlup’s photographs are still to be found as postcard prints, so she was clearly more than an amateur by the time these images of Italy were taken in the 1920s.

This Easter-themed postcard indicates a commercial mind behind it, and in fact Machlup was one of the contributors to the Viennese magazine Der Kuckuck (The Cuckoo), which published both professional and amateur photographs, particularly those of the worker-photographer clubs. The tourist association used some of her photography and may have also released postcards bearing her images. 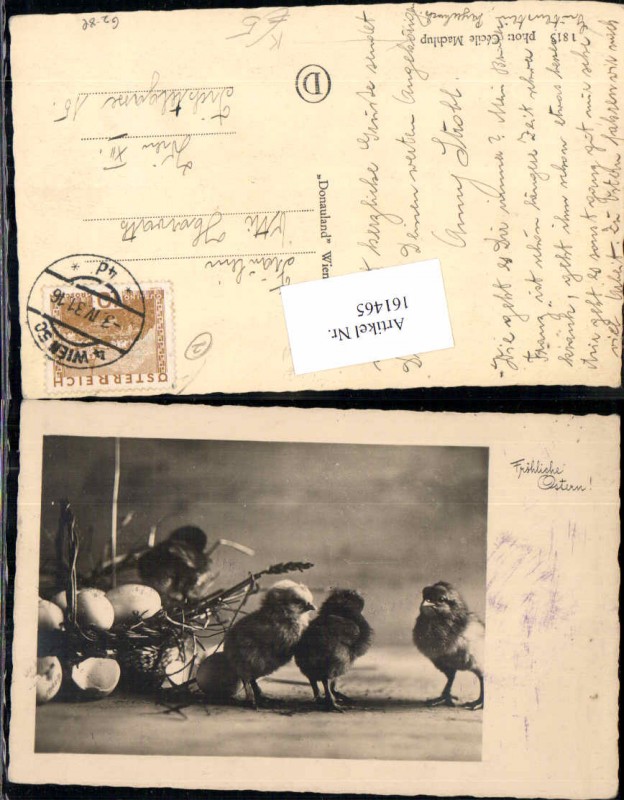 This surprisingly sachlichkeit image of the Graf Zeppelin flying over Vienna represents a brutalist  intrusion of a modern world into Machlup’s photography, and yet she handles the steeply craning perspective with aplomb to compose a futuristic image that was warranted a place in Weiner Magazin.

Machlup died just before Hitler’s Anchluss took effect in Vienna, prompting attacks against Jews such as herself and her husband.

No cause of death is recorded, but she was no doubt of delicate constitution being by then at the age of seventy, and one can imagine, as Jewish business people were paraded through the streets and their homes confiscated, the stress of the times alone would have affected her health.

Now lost or in private collections are examples of her work bearing titles including Schmus (group men on the street), After the funeral,  Market Scene, and Evening in the City Park, which indicate an ongoing interest in street photography.

Ary WG Koppejan’s amateur photographs record a short period on the streets of Den Haag in the Netherlands; I can find no trace of other photography by him. In earlier samples we see the population flee as Allied bombing damages the German-occupied city.

Panic sets in amongst the German troops and the local Fascists as the Allies approach Den Haag and large numbers of abandoned soldiers commandeer bicycles and are seen wobbling away laden with their possessions.

On ‘Mad Tuesday’ the main station is packed with both soldiers and civilians attempting to escape to Germany as the Allied troop carriers and tanks roll through the streets to cheering crowds.

Koppejan’s crisp and competent photography picks up pace as the Allies arrive to liberate the Netherlands and a rounding up of the Nazi sympathisers takes place.

Koppejan was a member of De Ondergedoken Camera (the Underground Camera) (1943 – 1945), a group of Dutch photographers who performed resistance work during the Second World War by documenting the German occupation of the Netherlands. The initiative of the photographer Fritz Kahlenberg (1916–1966) and the resistance fighter Tony Van Renterghem (1919–2009) it included both professional photographers and amateurs.

The Nazis prohibited photography so they were working under dangerous circumstances, their cameras concealed in bags or briefcases with a hole for the lens. They remained anonymous even to each other, known only occasionally by a pseudonym in order to continue operating even if some members were caught. In a shared central dark room they processed the thousands of pictures they took of German soldiers, arrests of resistance fighters and the like which could be passed to the allies. The work was exhibited two weeks after the liberation, with another Amsterdam during the famine held in 1947.

Whether overt or covert, the intention of the street photographer must be considered, even now, in making judgements about its ‘invasion of privacy” against the social, historical or political value of the work.

One thought on “January 24: Candid”