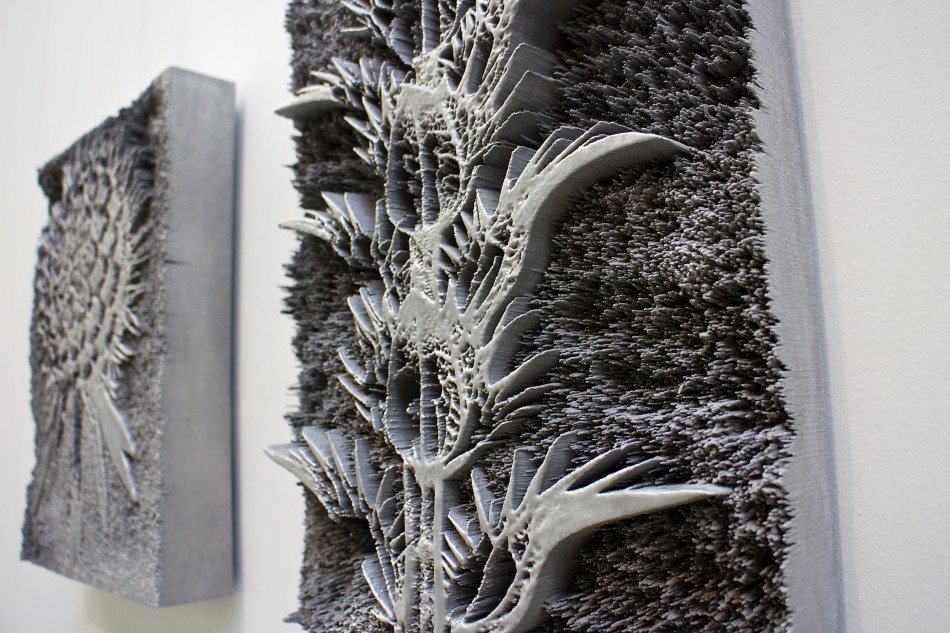 January 22: What relation does contemporary imaging bear to historical photography?

This is a question to contemplate in the current exhibition at Foam Fotografiemuseum, Keizersgracht 609, Amsterdam; Back to the Future. Curators Kim Knoppers (*1976) and Ann-Christin Bertrand equate the current period in photography with that of the nineteenth century in the early days of the medium; “To look ahead we first need to look back in time,” they write.

In the beginning, the mirror-like, unique-image technology of the daguerreotype and the lower-resolution, multiplicable negative/positive processes of the talbottype and calotype contended for universal acceptance. A spirit of experimentation prevailed and an array of possibilities sprang from invention and innovation, both applied and aesthetic.

These days, the popular and mainstream  photographic technologies are more homogeneous, but scientific experiment continues apace to produce revolutions in imaging, while artists expand the very idea of photography.

It is enough to look into the history of photography, e.g. in the 1920s and 1930s with Bauhaus, and the experiments done with photography then, like the Neues Sehen which came up when a small format camera, the Leica, came on the market. Do you remember what happened then? All those photograms and all those experiments in the laboratory! The same turn occurred in 1960s and 1970s with the rise of concept art which also brought people to a completely new understanding of photography. And these were always periods when experiments helped to examine the boundaries and characteristics of the medium. The history shows that photography and our understanding of the medium were always influenced by its technical development and changes in people’s understanding of photography as art. And those kinds of periods are what is happening today as well.

This blog, onthisdateinphotography.com is based on the idea of comparisons of old and new techniques and approaches, of technologies and aesthetics, more often finding similarities and cohesion between them than incompatible differences and discontinuities. Given a common interest both here and in this exhibition, it deserves return visits.

Spiros Hadjidjanos (*1978), one of the exhibitors and whose imagery features in publicity for the show, is driven by a desire to make photography sculptural, or photosculptures. He turns to Karl Blossfeldt (1865–1932), whose iconic photographs of plants taken in the 1920s in his classic book Urformen der Kunst. Hadjidjanos reworks them; using scans from the publication he converts image density into depth information. That is extracted to create 3D-printed objects in Alumide, a 50/50 mix of polyamide and aluminum particles that when laser sintered layer by layer, is fused together by the laser and the aluminium particles are entrapped in the resultant the polyamide matrix.

Blossfeldt’s imagery is ideal for this process since they are high-contrast with a generally featureless tonal background and sharp detail.  Here is one of Hadjidjanos’ 3D objects compared with the same image on a page of Urformen der Kunst.

The technology he uses is an advance on that traditionally used to print photographs in letterpress or offset commercial printing, the qualities of which are rarely investigated or used by artists. Compare these examples with a vintage halftone letterpress printing block and it is apparent that, while they would serve to print the image onto paper if that were attempted, the depth of Hadjidjanos’ ‘blocks’ has been hugely exaggerated by the algorithms used in digitally preparing them. The smooth graduations of the backgrounds present as undulating tips of ‘needles’ of Alumide, while the blacks become largely uninterrupted flat planes, and whites, particularly representing illumination at contours of the plant become deep chasms in the matrix.

Printing blocks like these were used alongside similar-sized blocks containing type in a printing press to commercially produce images and text for publications. The photographic image must be transformed from its two dimensional nature to be made sculptural, three-dimensional, in order to receive and print ink.

Letterpress is the oldest of print technologies, dating back centuries before the invention of movable type. In books and periodicals before the advent of halftone printing, the graphic elements were printed alongside type from hand engraved metal plates or wood blocks.

The idea of a halftone screen to render a tonal image in a stipple of varying densities of black dots is attributed to William Fox Talbot in the late 1850’s who experimented with lace as the matrix to break up the image.

The plethora of varying methods to produce the halftone effect, with the earliest being Nicéphore Niépce‘s trials, the first photographs, was a major part of the collective drive for innovation to which the curators of Back to the Future might point, as no single individual can be named as the inventor of the halfone photomechanical process.

American Frederic Ives, though only one in the lineage of inventors (below) of the halftone, was prominent in being the first to find a commercially viable process to convert photographs into small black or white lines or dots to make a printing block which could be used alongside text blocks in an ordinary printing press.

Like type, the image is binary, consisting only of ink or absence of ink, the lines or dots of different size (right, below) were small enough that from a normal viewing distance they gave the illusion of shades, just as the stippling or contour lines in an hand engraving would do (left, below). 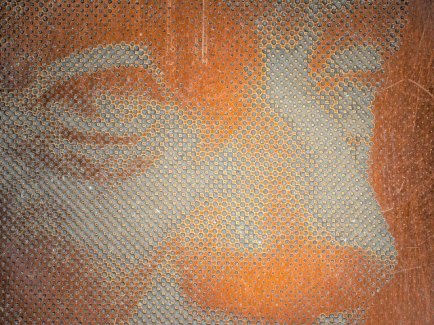 Like many before him Ives struggled in an early version of his process to transmogrify the photograph, to add a third dimension, in fact a change from image to object, that is necessary for printing in ink.  There we find, in his complex workflow some similarities with what Hadjidjanos is doing.

Where Hadjidjanos’ blocks are of nylon, Ives’ complex first process used rubber. Invented in 1878, its first step was a photosensitive gelatin plate exposed to a negative then washed out leaving behind a low relief of light-hardened gelatin, highest in the original shadow areas. A plaster cast is then made from the plate, which is then pressed against an inked rubber pad covered in pyramids from which larger dots of ink are transferred on the plaster’s surface, while only the tips of the pyramids reach the mid-tones and none touch the lowest points of the relief. The contours of the cast capture the tonal shades as dots in proportion to the original tones of the photograph (i.e. now the highlights of the original). The image pulled from the inked plaster cast is a negative which was re-photographed and transferred to another photosensitive printing plate returning the correct tones to shadows.

This complicated process was patented in 1881 but replaced four years later when Ives adapted a linear screen developed by Georg Meisenbach, cementing together, face-to-face, two 90-degree rotated linear glass screens to produce the dots optically and directly onto the plate coated with photoresist. This remains the principle, later simplified still further, by which halftones were created up until the advent of digital half-toning, introduced in the 1970s. However the first newspaper to print a halftone image, Montreal’s The Canadian Illustrated News of October 30, 1869, used a similar process (‘Leggo’s granulated photographs’) independently developed by W.A. Leggo and G.E. Desbarats in Canada for a full page cross-lined screen half-tone image of His Royal Highness Prince Arthur, from a photograph by William Notman.

Blossfeldt is also apposite to Spiros Hadjidjanos’ conceptual reinvention of the halftone block as the German word urformen in the title of his book Urformen der Kunst, generally known in English as Art Forms in Nature, may mean ‘archetype’ or the ‘primeval’ and significantly it refers to all industrial production processes in which a solid body is cast from formless material.

From beginnings as a sculptor and having completing apprenticeships at the ironworks and foundry in Mägdesprung and the Kunstgewerbeschule (Institute of the royal arts museum) in Berlin Blossfeldt, along with five other students, created and photographed casts of botanical specimens in and around Rome for his professor Moritz Meurer (1839–1916), who theorised that natural forms were reproduced in art. Self-taught in photography, he continued to work with Meurer from 1884 to 1896, traveling beyond Italy through Greece, and North Africa, documenting architecture and sculpture. From 1898 to 1930 Blossfeldt taught ‘the modelling of plants from life’ at the Kunstgewerbeschule in Berlin; during this time, he amassed an archive of thousands of photographs of plants that he used as models to teach his metalwork students.

Anthemion (2015) returns to Meurer’s and Blossfeldt’s theories of artworks being inspired by nature in that it represents a prominent example of ancient Greek and ancient Roman use especially as an architectural ornament and friezes. Reconstituted from a photographic illustration, possibly made in the 1930s by Walter Hege (1893–1955), of the design found on the Erechtheion Frieze (c.409 BC – c.406 BC) from the Athens Acropolis, in Spiros Hadjidjanos’ hands the flat image is extruded to become architecture once again, albeit fragmentary and corroded. It looks like an museum piece, but on inspection in the round is found to be made of contemporary materials; nylon and aluminium. 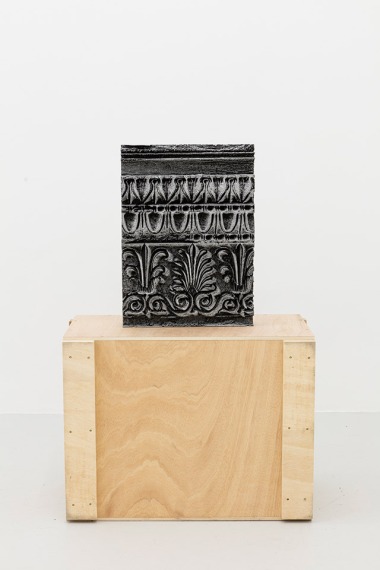 It is little wonder then that Spiros Hadjidjanos has been chosen to headline this fascinating exhibition. In the spirit of Back to the Future, his is a truly alternative photography, one which reinvents and revalues the haptic qualities of superseded print technologies to discover unexpected sculptural possibilities.

One thought on “January 22: Relief”