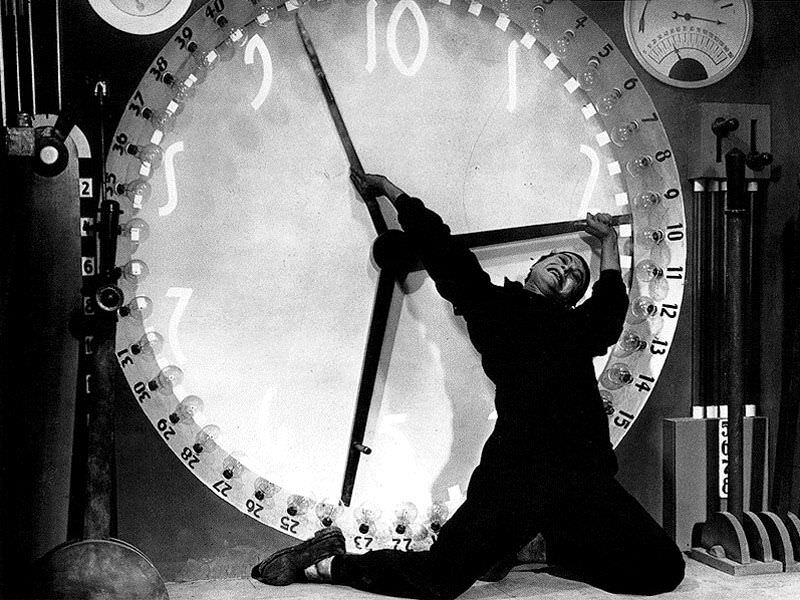 November 23: ‘Time is money’ they say, and that is never more the case than at an auction, especially when that auction is of photographs.

Here’s a prime example; five years ago on Friday 23rd November 2012 at 2pm, Bloomsbury Auctions, London, held an auction Photographs, including photobooks. As usual the 285 lots for sale were on view by exhibition for a week beforehand and included 236 photographs and 49 photobooks.

The auction catalogue is curated as far as is possible given that the items coming into an auction house arrive from an array of sellers whose merchandise is an idiosyncratic collection peculiar to them. Their photography specialist is Sarah Wheeler, who would have oversight of the organisation and layout of the catalogue, which is ordered mainly chronologically, but with some very significant Négre, Baldus, Atget and Julia Margaret Cameron works up front, the reserve for some being up to $12,000, followed by progressively more modern works, while the rest are loosely grouped according to subject such as photojournalism, fashion, celebrities and human interest.

It is interesting is to see the provenance of the works in the catalogue and to play the guessing game about whether they are worth their asking price, but I’m interested in another aspect. Given that this is a random assortment of photographs, what common threads can be woven amongst them?

One amongst the offerings particularly attracts my attention; a photograph by Gjon Mili that appears abstract, though you may recognise something in it if I mention the name Picasso.

In 1949 LIFE Magazine photographer sent Gjon Mili to visit Pablo Picasso in the small, scenic town of Vallauris in the South of France where he had bought and transformed the labyrinthine Les Fournas, a former perfumery into his studio.

When Mili showed Picasso his picture of skaters photographed with lights attached to their bodies and feet, he was intrigued with the technique as a means of  drawing with light, and fascinated by the result he posed for five sessions, tracing in the darkness 30 drawings of centaurs, bulls, Greek profiles and his signature.

Mili’s technique combined flash with the time exposure needed to expose the light drawing, so collaboration between artist and photographer was essential. Here we can see Picasso illuminated just as he begins his drawing, and as is the case with all good line drawing the thickness of the mark is varied, in this case through changes in acceleration of the light bulb. The artist was already 68 when these shots were made and yet his gestures are vigorous and agile, and remarkably, he manages to make coherent drawings despite the fact that he is working blind. Mili’s lighting is masterful. In the space of this cellar he has placed his  flash unit hard against the whitewashed wall, generating raking light,  interrupted sufficiently by the shelves of pottery to provide a contrasting background for the subject’s head and torso which, because of the intensity of the flash (it blows out detail on Picasso’s shorts), bounce from his back to give him a soft halo.

If we take time and motion as theme, we discover more. TheSoviet photojournalist Dmitri Baltermants (1912-1990), known for his affecting 1942 photograph of Soviet women grieving over the frozen bodies of Soviet soldiers Searching for the Loved Ones at Kerch, makes use of a found instance of this technique in his pyrotechnic 1943 war photograph Panzers Shooting at Night in which, in a show of mechanical aggression, tracers and flares illuminate the blast smoke from the tanks so brightly that detail of the tanks themselves even a distant barn are lit up.

These two photographers inherit a technique in which photographic time, which we are used to thinking of as instant, is stretched to record action in the manner we expect of cinema.

We are used to the idea of blur which is a manifestation of the same, that we see here in Paul Hoeffler‘s sliding and jittering figures of dancers and jazz performers in a dance hall in 1958. Record companies such as Verve, Mercury, Prestige and Blue Note commissioned Hoeffler for their album covers, for which in so many cases he produced broodingly intense images shot on location in low light levels in stage lighting heavy on the shadows. Hand-held or even with a hastily set up tripod, these are remarkable on pushed film for their depth of field and sharpness of the scene containing these figures in motion.

The inheritance that I’m talking about was that set down by Étienne Jules Marey and his quest for chronophotographie. He realised that by using a shutter that opened repeatedly and regularly on the film he could record action in such a way that trajectories and pace would be evident from the staccato traces left by the subject in motion.

Marey’s 1880s self-calibrating imagery is in fact more scientifically informative than the products of a similar and contemporary project by Eadweard Muybridge in his Animal Locomotion, An Electro-Photographic Investigation of Consecutive Phases of Animal Movements, made 1872-1885. Where Marey’s work in France contributes to Frank and Lillian Gilbreth‘s 1920s time-and-motion studies using light traces (as Gjon Mili was to do more playfully later), in Muybridge’s may be seen the nascent motion picture.

The cover of the catalogue, back and front, shows examples of Muybridge’s sequences of ‘locomotion’ and inside there are 50 of his collotypes produced for his book being offered for sale together for between $24,160-$32,200.

The figure in the Standing Jump sequence interests me especially; the way the subject in his athletic effort interacts with the calibrations on the black backdrop reveals that instead of being painted white lines they are stretched strings that the jumper grabs unconsciously at the height of his vault. Muybridge used banks of separate cameras whose shutters were activated by solenoids connected to a clockwork controller to produce his sequences. Consequently, adjacent frames can be viewed stereoscopically to produce a depth effect in static objects, like the hastily assembled stick with string, connected to the backdrop, over which the man jumps.

Superficially like the Muybridges are John Everard‘s Female Nudes, Studies for Artists, ca.1950 which appear here as Lot 188, though when asked, this London photographer denied all knowledge of that predecessor. He worked in collaboration with his erstwhile competitors Walter Bird and Horace Roye trading as Photo Centre Ltd. in Savile Row.

He/they made a series of ‘studies’ of the female nude of the voyeuristic ‘nudge-nudge, wink-wink’ variety suitably airbrushed and ‘dignified’ by titles including Artist’s Model (1951), Second Sitting: Another Artist’s Model (1954), Sculptor’s Model: A Third Sitting (1956), and Model in Movement (1959) to get past British censors. They have the outward appearance of ‘studies for artists’, especially those ostensibly marketed to sculptors which present rotational views of the model. That is less credible given the absence of male models, unlike Muybridge’s work in which he included even his aged self, long white beard, sinewy and slightly stooped figure and all. The suburban origin of Everard’s models remains obvious even when they are photographed amongst beach dunes or behind hedgerows given their furtive sidelong glances there, and below, their tendency to keep their shoes on.

The Muybridge model is referenced obliquely too in Inge Morath‘s Window Washers, 48th Street, New York, of 1958 in which the cleaners, precariously suspended by straps clipped to the window frames, perch on slender ledges in front of the grimy building. Their white overalls semaphore their labour while Morath’s cropping hints at how vertiginously high above the street they are.

The Art Deco architecture which frames the men in Morath’s picture puts one in mind, whether intentionally I cannot tell, of scenes of the machine in Fritz Lang‘s 1927 Metropolis to which the workers of the underworld are enslaved … 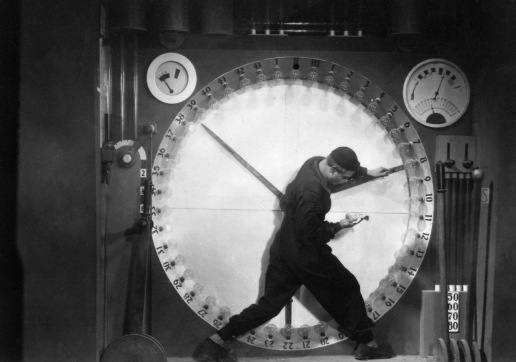 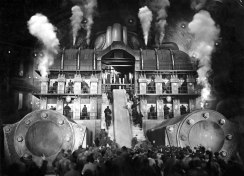 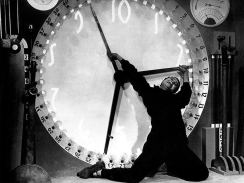 During the late fifties when Morath had become one of the few women to be full members of the photo agency Magnum, she traveled widely, and using her fluency in a number of languages covered stories in the continents of Europe, Africa and America, for Holiday, Paris Match, and Vogue.

Iain Macmillan‘s photograph for the cover of the Beatles Abbey Road released in 1969 carries the Muybridge motif emphatically into the mainstream. The idea of photographing the four musicians crossing Abbey Road outside their studio may have occurred  by osmosis to McCartney, who sketched it out for Macmillan, given the popularity of the eccentric nineteenth century photographer in the 60s and the contact that both the Beatles, through Yoko Ono, and Macmillan had with the art scene. Muybridge was hot; both of his Animal Locomotion and Human Locomotion volumes had been reissued in the mid-1950s for the first time since the First World War.

In the fifties Francis Bacon had mined these publications for wrestlers, a palsied child, and other models for his tortured paintings. Other artists followed, with Douglas Heubler‘s Location Piece #28 of 1969 comprising a grid of photographs taken at equal time intervals, Marion Fuller and Hollis Frampton’s Sixteen Studies from Vegetable Locomotion was a humorous conceptual take, while William Christenberry (Red Building in Forest, Hale County, begun 1964), Duane Michals, Ralph Steiner, Ray Metzker, Robert Smithson, Mel Bochner and especially Sol Lewitt, who owned two of the Animal Locomotion plates, all made works referring to Muybridge during the decade.

The Abbey Road cover therefore can be read as the visual equivalent of the album’s content which on side two especially dispenses with separate tracks in favour of unbroken forward motion. Allowed ten minutes to get his shot under police supervision at the pedestrian crossing, Macmillan needed to have a solid previsualised concept for his cover photograph, so armed with McCartney’s sketch he completed the assignment on one roll of film. As the man behind the camera, he orchestrated the sunburst pattern created by the perspective of the zebra crossing that forms a third of the composition and is the rhythm section of the design. It also completes the sixties aesthetic in its reference to retro Art Deco beloved of the period.

Even in the random survey that is an auction catalogue we can trace the roots of this young medium, and in particular, its treatment of motion.

Motion is a significant concept in the photography of both, and both contributed to the magazine SSSR na stroike (USSR in Construction) in the 1930s. 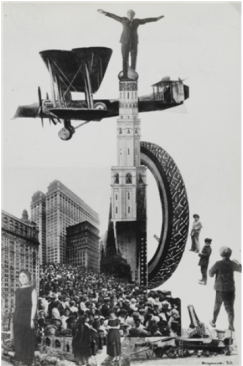 Alexander Rodchenko (1923) Vladimir Mayakovsky: Pro Eto. Ei i Mne (About this. To Her and to Me) 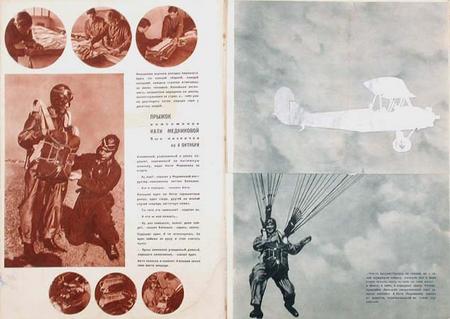 The Gjon Mili? It didn’t meet its reserve. Perhaps selling Picasso’s signature as another artist’s work proved too big a copyright headache?

Does it pay to know your photography history?