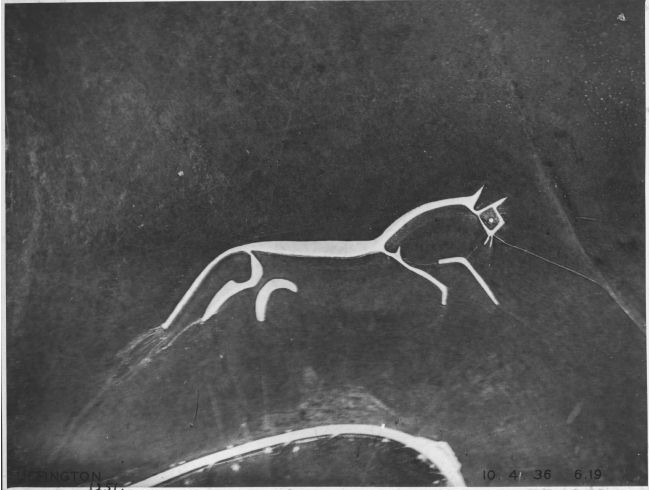 November 24: Aerial photographs have proven useful to archaeologists since as early as 1880, but not until the advent of the aeroplane, and even then only after World War I one hundred years ago, were they used with any frequency.

Before the invention of powered flight, archaeologists and antiquarians did imagine the advantages of an aerial view, for which some experimented with balloons and kites. While photographs from balloons continued to be made –famously those of Robert Petschow (1888–1945) – military operations accelerated the development of aeroplanes, cameras, lenses and photographic materials, but also increased the awareness of aerial photographs as reliable sources of information, especially for mapping, in which rapid improvement resulted in the formation of the new science of photogrammetry.

The new science contributed especially to geological surveys such as the photo-topography of Alaska with both aerial and ground-based cameras made by James Warren Bagley (1881–1947)  for the US Geological Survey (1905-1917).

During the war it was noticed that many aerial photographs taken in Mesopotamia by the Royal Air Force showed distinct traces of sites of former cities, often clear enough to permit them to be mapped. Likewise, the Germans took a number of archaeological photographs in Sinai.

The earliest studies were made on photographs originally taken for military purposes, either for mapping or on bombing practice runs during which, instead of a bomb being released, a shutter would be fired. Few areas had been photographed especially for archaeological purposes. In 1922, Osbert G. S. Crawford (1886–1957) who had experience of flying in the First World War which reinforced his conviction that aerial photographs might be of quite some interest to archaeologists. Shown some RAF photographs of Hampshire by Dr Williams-Freeman, he realised just how interesting they could be.

Pictures of Windmill Hill, near Crawley (and now Gatwick Airport), taken at 3,000 metres revealed an entire system of ancient field boundaries, or lynchets, invisible to the earthbound observer. Just as he had mapped enemy trenches during the war the photographs this view enabled him to produce a map which, he announced to the Royal Geographical Society in March 1923, clearly showed ‘fields of a group of communities which ceased to exist about 1,500 years ago’. Here was the instrument that would revolutionise archaeology just as the telescope had done for astronomy.

Crawford made unsuccessful attempts to persuade the Royal Air Force to photograph some British sites, but he persevered and he regularly visited RAF bases and collected negatives that contained (or had the potential to contain) something of archaeological interest; he circulated lists of places that he wanted photographs of to those same RAF bases.

His interpretations of faint traces seen in the fields (‘cropmarks’) on six glass negatives taken on the same flight (15th June 1921) enabled him to identify the missing portion of the Stonehenge Avenue. The indications on the photographs were confirmed by excavations on the ground. The discovery excited the interest of the general public and as a result, all aerial photographs containing potential archaeological information were transferred to the Ordnance Survey Office, and Mr. Crawford was appointed Archaeology Officer to this institution. By the mid-1930s the collection had, in his own words, become “a sort of reference library” which the Ordnance Survey Archaeology Division (i.e. Crawford and his small band of draughtsmen/fieldworkers) could draw on when necessary.

It was on rare occasions that Crawford operated an airborne camera himself, most notably for 1928 his joint publication with Alexander Koller (1889-1955) Wessex from the Air. He referred instead to make notes and sketches as he flew over a site, often using a cavalryman’s mapping board of the kind in use from the 1870s to the late 1920s (above).

During the 1930s Crawford, inspired by German archaeological organisations’ public appeals for suggestions of likely sites and artifacts, distributed pamphlets. George Allen, a contemporary of both Petschow and Bagley and who died on this date in 1940, picked one up from a table in a Southhampton hotel. He contacted Crawford who sent him a list of the sites he was to record around the RAF base at Bicester near Oxford.

Allen, like Crawford, had a military background. Born January 1891, he had joined the Royal Military Academy in Woolwich but, gazetted as a Second Lieutenant in The Royal Artillery, he abandoned his commission because he had hoped to go into the Royal Engineers. Instead he got the training he wanted at Messrs. Howard Humphreys and Sons, consulting engineers, and was appointed a waterworks engineer on the East Coast of Africa, before joining his father’s Oxford Steam Plough Company as a manager. He served again in the military during the First World War after which he rejoined his father’s company (renamed John Allen and Sons) as director.

Prospering, in 1929 he was the first in Oxfordshire to purchase an aeroplane, a red two-seater De Havilland Puss Moth, called Maid of the Mist, which he kept at his own airfield at Clifton Hampden.

After work, Allen spent his evenings and weekends flying over various counties, taking photographs of known, and previously unknown, unrecorded sites, mainly archaeological. Allen’s pioneering archaeological aerial photography was financed by his business and it is intriguing to contemplate what his relationship with the zealously Marxist Crawford who enthusiastically received his pictures; “When I see his handwriting on a large packet amongst my morning letters,” he told the Prehistoric Society in 1938, “I know that there will be no work done until the contents have been examined and new discoveries duly gloated over.”

It was fortunate for Crawford that for Allen time and money were of little consequence, because archaeological aerial photography is seasonal for each site, and Allen was free to fly off at a moment’s notice. When in April 1933 Crawford wrote excitedly to tell him there was a ‘plum waiting to be picked’ in Castor, near Peterborough, Allen immediately flew over, but had to report a couple of weeks later that the ‘plum’ was ‘not quite ready’. Later, the dry summer revealed the target, and others; “I am overwhelmed with air work…the whole of the Thames Valley and its tributaries have come out in a violent rash; circles and marks everywhere.”

Allen’s photograph (above) of fields near Royston, taken in the winter, just after rain, is a scene of modern machinery in motion; a train steaming along the line from Royston to Baldock; a car running beside it on the parallel road. Neither the car driver nor passengers in the train can see what the aerial view reveals. Iron Age ditches, silted up over the centuries, cut across both road and railway and having soaked up rain appear as lines of dark stains across the ploughed fields, and running below and alongside the road are are the ruts of the old Icknield Way. [see Kitty Hauser’s 2015 biography Bloody Old Britain: O.G.S. Crawford And The Archaeology Of Modern Life]

He could not find a suitable camera and built his own of aluminium to take the 2000 photographs in total. Fitted with a large handle on each side, each plate had to be replaced after exposure. Allen flew his plane single-handed, Ordnance Survey map across his knees. Flying hands off he would lean out to take each photograph, which resulted in an oblique image, rather than vertical shots that were  better for mapping purposes and that Crawford preferred, and used for Wessex from the Air. “There is no risk in letting go the controls,” wrote Allen. Single-handedly operating a camera inserted in the floor of the plane was impractical for the solo flyer (and hazardous when he was relying on sheet film in holders, one would imagine!), though a vertical camera was eventually built in and remained with the plane when he donated it for use in the Second World War.

Allen’s technique may have been novel; but the results were stunningly beautiful [throughout this post I have included links to Google Maps views of the sites which reveal the prosaic nature of vertical views taken at a random time of day – they have nothing of the quality of Allen’s work]. He shot mostly in the late afternoon or evening which highlights relief with raking light and when he had to contend with the frequent overcast weather he would reconnoitre new sites for photography in better conditions. Allan wrote in his book Discovery from the Air how throughout the year ‘the visible signs [of a site] vary, sometimes developing (like a photograph) during the summer…sometimes fading out.’ Back on the ground he often revisited sites and assisted at digs.

His photography proved invaluable to the interpretation of archaeological sites in Wiltshire, Hampshire, Kent, Somerset, Hertfordshire, Dorset, Gloucestershire and Lincolnshire, but especially in Oxfordshire. Before his life was tragically cut short, he was achieving recognition.

Before his life was tragically cut short, he was achieving recognition. Elected as a fellow of the Society of Antiquaries of London in 1936, he also delivered lectures to local societies and at the Ashmolean Museum, where his camera and collection of photographs are now kept.

Credit should be given to the way Modernism in painting exploited into the aerial perspective, as has so often been remarked, but with little direct evidence, in the case of the Italian Futurists, but it is true even of the rather more staid British version in this period. 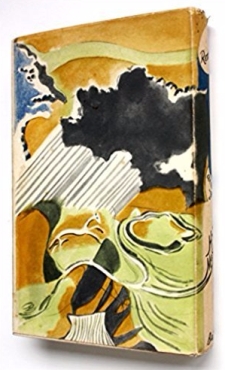 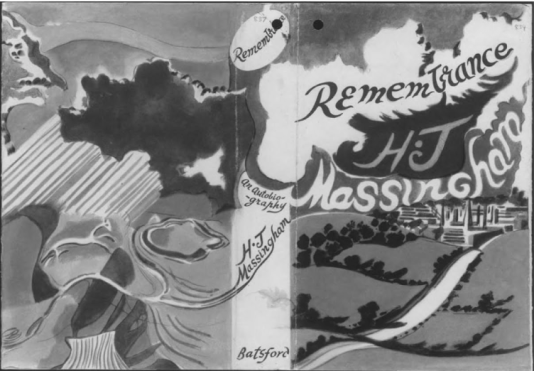 Paul Nash (1889–1946) and his wife Margaret moved to Banbury Road in Oxford six months before George Allen’s tragic death in a motorcycle accident. Appointed an official war artist in the Air Ministry three months earlier, Nash wrote to the Ashmolean Museum asking for enlargements of seven of Allen’s aerials, requesting them ‘for his official purposes in connection with his war pictures’. The Museum’s assistant Keeper wrote to Allen:

Had he been a mere artist enquiring on his private behalf, I should have said that it was quite impossible, and that I should have refused to do anything about it or to bother you, but he seemed to be so sincere in feeling that it would help him in his official job, that I felt I should, at least, put the question to you.

The rear cover of a book for which one of Nash’s paintings was used shows very clearly that the artist referred to several of Allen’s Uffington photographs – those of  May 10, August 12 (above) and the sweeping view below made on September 5 1937.

It was not only the new point of view offered by aerial photography that distinguishes his work but also Allen’s sense of calling that made his imagery so useful. Where others’ pictures were made for other purposes and only incidentally of relevance to archaeology, Allen was among the first to devote themselves to penetrating into the past hidden below the surface of British soil.