November 22: 1963, I was twelve years old. It was a lovely sunny Saturday morning, forecast to be 60ºF (we used Fahrenheit in those days, pre-decimal), cooling down after a hot 89ºF Thursday. Magpies warbled and the air was full of the nitrogenous odours of bayside wattle blooms mixed with next-doors’ roses. Summer school holidays were only 3 weeks away.

Diving under the green light of the fresh leaves of the wide oak tree,  I collected the morning paper and the milk bottles from our letter box. I always snuck a preview of the comics page before taking the paper in to my father who would commandeer it for the morning. There I stood, stunned, not quite believing what I was reading. I rushed inside, but cannot remember any more of that.

US President John F Kennedy was assassinated  in Dallas, Texas, in the afternoon on Friday 22 November 1963. The time difference meant that we Australians woke up to the news on the Saturday morning. Television in Australia was  only seven years old at the time and we didn’t have one; my father, a print journalist, insisted we wait until colour TV was available before we got one. He hadn’t yet succumbed to hiring the coin-in-the-slot set that kept us entertained over the Christmas holidays. So we saw nothing of the event other than the few pictures in the papers over the coming days, but heard plenty on the radio. This was an era when Australia was virtually another State of the Union; when Lyndon Johnson succeeded Kennedy we were “All the Way with LBJ” into the Vietnam War.

The heroic JFK shot dead! I was learning too much about the world, too fast, I knew. I remember much more vividly the evening barely a year before when I’d seen my father consoling my mother who was moved to tears of horror over the Cuban Missile Crisis, certain that we were all to be fried in a global nuclear war. I’d recently borrowed the wrong book from the school library and then had to live with indelible images of stacks of emaciated corpses and the sight and the indigestible idea that in those concentration camps people had been burnt in ovens like the Sunday roast.

Kennedy was the fourth US president to be assassinated; the others were Abraham Lincoln (1865), James Garfield (1881), and William McKinley (1901) nor was Kennedy’s the first shooting of an office holder in the United States, or elsewhere to be photographed.  Photographers William Warnecke (1881 – 1939) and Wade Mountford Jnr. had stepped forward to make what they thought would be good press photos of the new New York City Mayor, instead each captured the moment just after his would-be killer James J. Gallagher recently sacked city employee, shot a bullet through Mayor Gaynor’s neck. 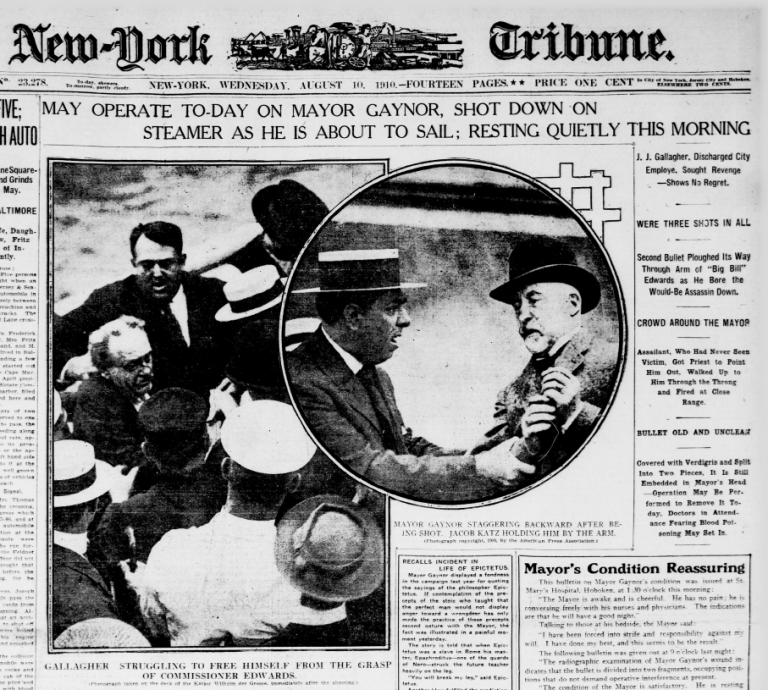 In Dallas, Kennedy’s ‘motorcade’ (a monstrous Americanism that we soon learned) was surrounded by 32 people with cameras in Dealey Plaza who took pictures of parts of the events of the assassination.

The President’s public appearance was routine and not thought worthy of televising by the media, but of 14 existing amateur movies of the event, those that captured the fatal shot were taken by Abraham Zapruder (1905–1970), Orville Nix (1911–1972), Marie Muchmore (1909–1990), whose footage was shown on television in New York on November 26, 1963, and photographer Charles Bronson (*1918) though he was at a greater distance than Zapruder.

These images were subsequently examined in minute detail, particularly the Zapruder film which he handed over to a United States Secret Service agent and which subsequently was the subject of detailed reports of the Assassination Records Review Board which examined it frame by frame, reporting on such minutiae as camera shake in the film and how it might reveal the exact moment that shots were fired.

Most intriguingly the film yielded three-dimensional information and just as the two photographs of the Gaynor shooting give us a rounded idea of the situation, viewing it in stereo makes more sense of the event. The stereo effect is an artefact of  motion picture film consisting of a series of still photographs. A slight sideways movement of the camera lens can result in individual frames being viewed as stereo pairs. In addition, even if the camera is held relatively still, as was Zapruder’s top-end 8 mm Bell & Howell Zoomatic Director, and panned with the moving subject such as a limousine, the movement may give rise to stereo pairs of photographs because, in relative terms, the effect is that of the camera moving around a still object. In addition, the superimposition increases the effective resolution.

This technique was applied to the Zapruder film to test the theory that the first of the two bullets to strike Kennedy exited his neck and also struck Governor Connally seated in front of him in the limousine. The relative depth of Kennedy and Connally within the limousine could be carefully examined from the 3D images. On this basis, their relative alignment was found to be consistent with this ‘single-bullet theory’, supported by the trajectory analysis.

In fact Zapruder’s entire movie, after processing by Roger Harris can be viewed in stereo, though it is horrible, as this live WFAA television interview with Zapruder after the assassination indicates:

JAY WATSON (WFAA, Dallas):…would you tell us your story please, sir?
ZAPRUDER: I got out in, uh, about a half-hour earlier to get a good spot to shoot some  pictures. And I found a spot, one of these concrete blocks they have down near that park, near the underpass. And I got on top there, there was another girl from my office, she was right behind me. And as I was shooting, as the President was coming down from Houston Street making his turn, it was about a half-way down there, I heard a shot, and he slumped to the side, like this. Then I heard another shot or two, I couldn’t say it was one or two, and I saw his head practically open up [places fingers of right hand to right side of head in a narrow cone, over his right ear], all blood and everything, and I kept on shooting. That’s about all, I’m just sick, I can’t…
WATSON: I think that pretty well expresses the entire feelings of the whole world.
ZAPRUDER: Terrible, terrible.
WATSON: You have the film in your camera, we’ll try to get…
ZAPRUDER: Yes, I brought it on the studio, now.
WATSON: We’ll try to get that processed and have it done as soon as possible…

Conspiracy theories about the Zapruder’s Kodachrome movie abound, of course, especially after the 1979 US House Select Committee on Assassinations, a congressional examination of the death of Kennedy and of Martin Luther King.

Since then, President George H.W. Bush on Oct. 26, 1992 signed a law requiring all records related to Kennedy’s assassination be released within 25 years (this year), unless the intelligence might adversely affect essential conduct of law enforcement, military operations or foreign relations.

Last month, on the 25-year deadline, President Trump managed to make this scheduled release sound like his initiative as part of his ‘draining the swamp’.  However, he later admitted that  he had “no choice” but to agree to government agencies continuing to withhold sensitive information.

The release of thousands of documents was eagerly awaited by those who are convinced that the whole thing was a conspiracy, a cover-up, though only 144 previously unseen records are being released. 8,336 documents are being released in their entirety and 2,408 are released with limited redactions.

Seeing is believing, and viewing the movie in 3D with your own eyes makes nonsense of many of these theories, most of which are being dispensed with by expert examination as these further documents come to light.

A (not-so-United) States president would do well to pay careful attention to statistics; there have been more than 20 known attempts to kill sitting and former presidents and presidents-elect. Four sitting presidents have been shot to death, and two presidents were injured in attempted assassinations, also by gunshot: Theodore Roosevelt (the 26th President) and Ronald Reagan (the 40th President). With the exception of Lyndon B. Johnson, every president’s life since John F. Kennedy has been threatened with assassination. Counting only the deaths and woundings by gunshot, the present incumbent, who is a strident promoter of gun ownership, stands an 11% chance of being victim of an attempted shooting, perhaps greater when more than half of those who voted opposed his election.