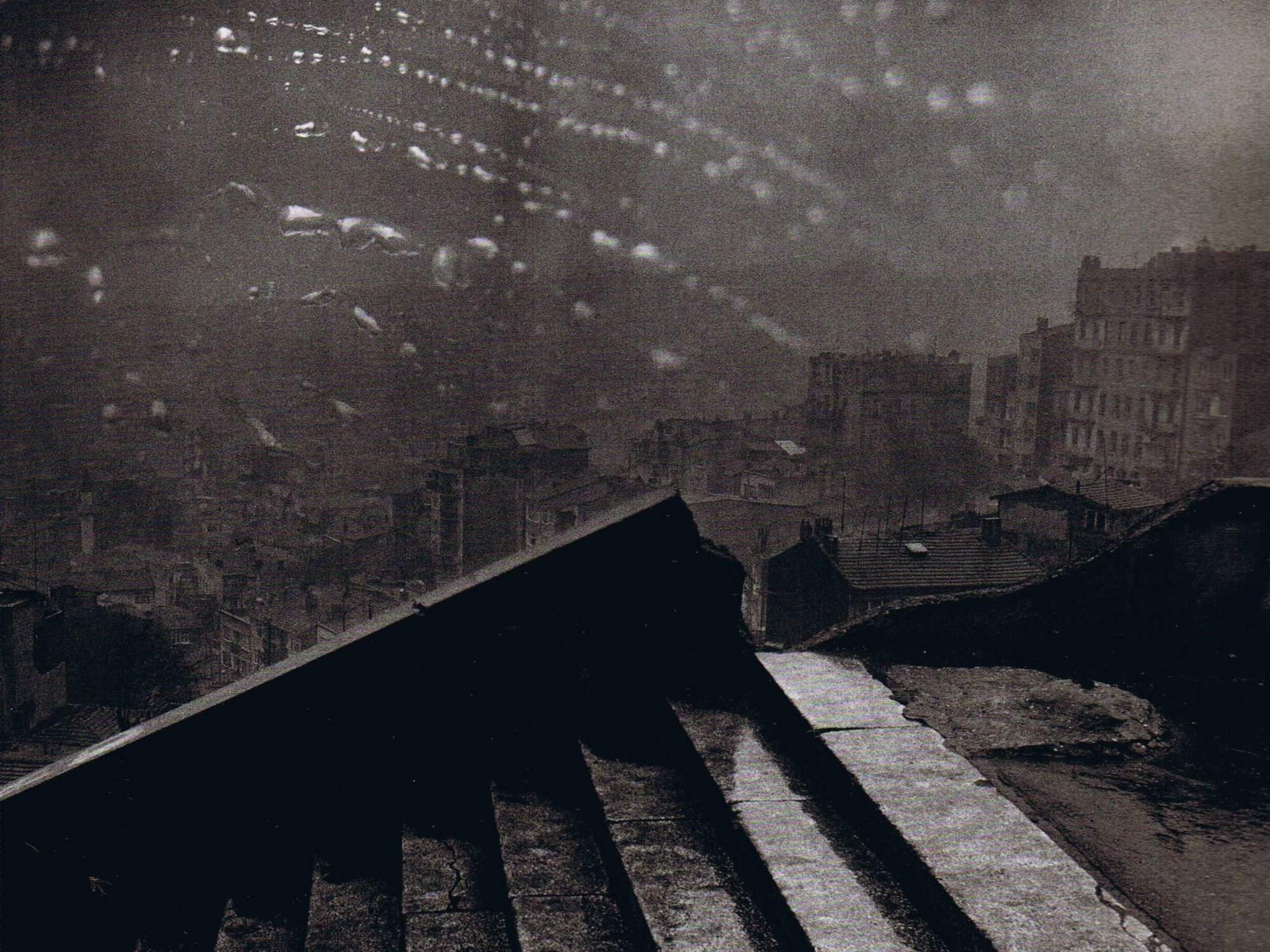 June 26: Poetry: a lucid representation of the real or unreal in a novel combination of words or images.

The photomontage is the format that best enables a deliberate and experimental conjunction of imagery. Those of the promising young photographer Swiss Jean-Pascal Imsand, who was born on this day in Lausanne in 1960, are outstanding examples. Sadly, his early death by suicide in 1994 left the world with a mere glimpse of his potential.

Among those photographers who came to the fore in the late 1980s and 1990s, Jean-Pascal Imsand was working just as the early computer graphics software was becoming available, but continued to work with film and paper; all of his montaging was done in the darkroom.

Up until 1985 his artistic practice was predominantly drawings (many regularly appearing in Fem­ina, Emois, L’Hebdo and Voir magazines from 1979 to 1983) on which he concentrated probably in order to distinguish himself from his famous father Marcel who had devoted himself to photography in the 1960s.

His gravitation toward photography now seems inveitable. After attending the Kunstgewerbeschule in Basel, where he studied lithography, etching and graphic design, in the early 1980s he assisted Jon Goodman at the Atelier Pietro Sarto in Saint-Prex, in the Canton of Vaud. The printers often produced photo-based etchings and lithographs, and there he worked on dustgrained photogravures for the portfolio Edward Steichen: The Early Years,1900 –1927, as well as a number of Paul Strand images for the Aperture Foundation.

This technical background translated perfectly into the photographic medium and in addition, he was encouraged to pursue photography by two of his mentors, Charles Henri Favrod, the founding director of the Musée de l’Elysée in Lausanne—Switzerland’s first photography museum—and Edmond Quinche, who taught him lithography at the Atelier. The serendipitous nature of hand-inking printing plates and his own intuitive artistic vision enabled him to move easily from printmakers’ atelier to darkroom to render in silver what he knew so well how to do in ink.

That Jean-Pascal was awarded the Grand Prix Kodak de la Photographie Européenne in Arles in 1988 so soon after taking up the medium is recognition of the aesthetic and narrative qualities of his work. In reporting his win the British Journal of Photography remarked that his “powerful and dramatic black-and-white prints look like stills from surreal cinema.”

His photomontage skills and his subtle application of them, which he preferred to call ‘assemblies’, rival the work of the older Jerry Uelsmann of the same period.

The latter used complex masking and multiple enlargers for imagery (e.g. at right) that is ostentatious and laboured in comparison with Imsand’s gentle and suggestive approach that leaves interpretation open.

This image is achieved by alternate masking and printing from only two negatives with harmonius lighting effects (and in which the cutout gypsy dancing figure from a Gitanes pack is left to the viewer to discover), where Uelsmann has used at least five negatives for a certainly viruoso, but pedantic and less affecting result.

Even as early as 1985 when he had just started to make photomontages and had become a full-time photographer actively exhibiting in galleries and museums and working on commercial assignments, Tunnel of that year displays Imsand’s capacity to observe and exploit poetic connections and the visual rhymes between his images; the twisting cloud formation fits perfectly into the perspective of this blurred road shot, presumably made from a moving car. The montage is again quite a simple joining, by soft masking and double printing, of only two negatives, but the result is eloquent and compelling.

In the following untitled work the ‘assembly’ is even more simple; the watery image of Lac Leman (Lake Geneva) is exposed for the sky, resulting in dark troughs between the waves that when sandwiched with a view of Lausanne from its steep mountain surrounds, leaves the lighter-toned sunlit buildings retaining whites in the blank areas of the lake negative.

Imsand constructed variations on such images of inundation. With their deep, unfathomable blacks, they are never repetitive, but obsessive, a theme that hints at a troubled state of mind. Charles Henri Favrod at the Musée Elysée described him as “gifted, reserved, sensitive and dreamy.” 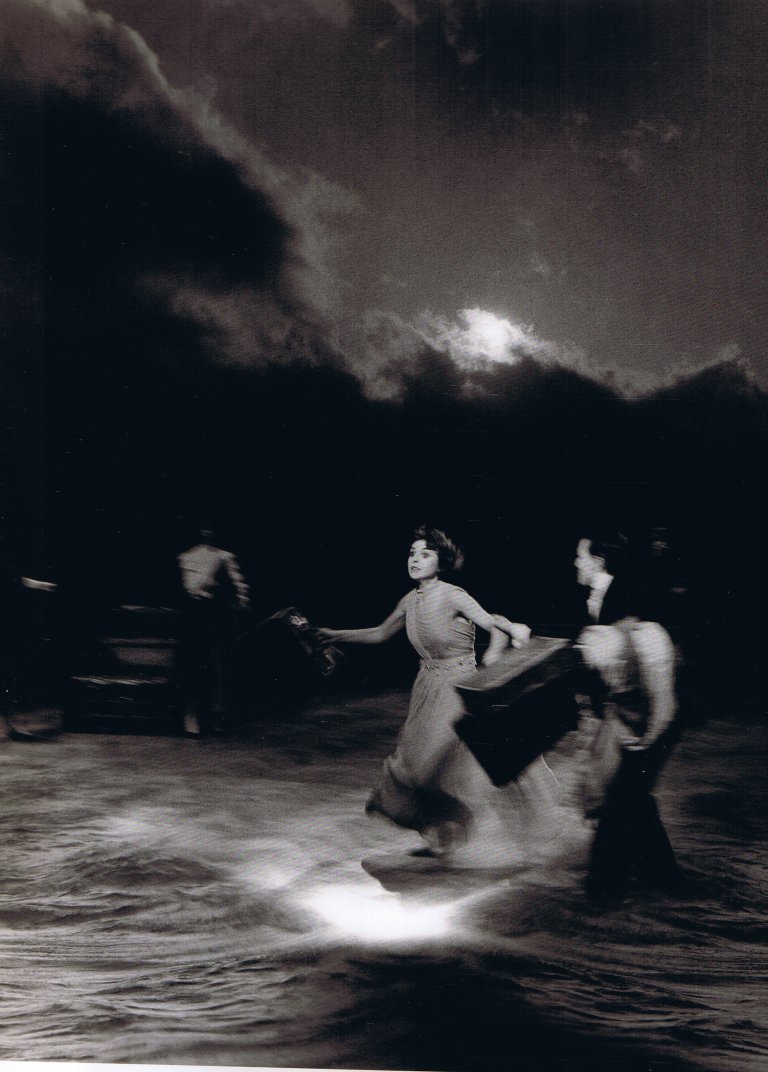 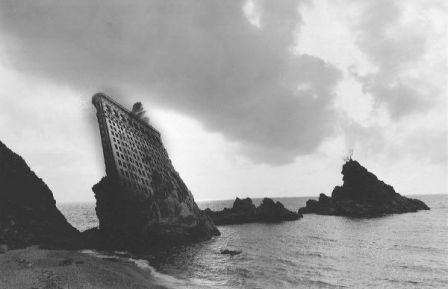 Imsand’s journeys abroad were few; he travelled for short stays in Istanbul, New York, Paris, Rome and Venice only to shoot the images that appear in his montages, otherwise most of his pictures were made in Lausanne and Zurich. This is how New York‘s famous flatiron building, first made famous photographically by Alfred Stieglitz ( 1864–1946) in 1903, comes to be be stranded on a rocky shore. 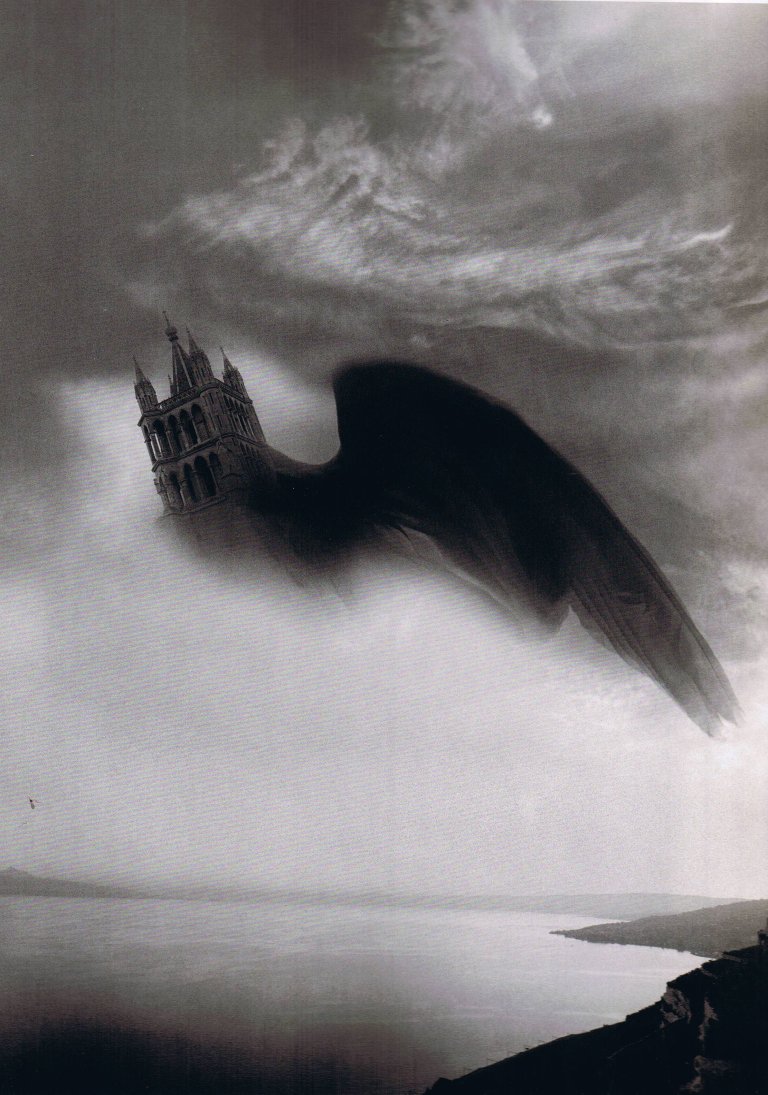 Imsand was affiliated to the photographers’ agencies Lookat in Zurich and Vu in Paris and was commissioned by magazines such as du. Unlike most other photographers who work both in fine art and commercial photography, Imsand did not alter his approach between the two. Dieter Bachmann, the editor of Switzerland’s famous cultural magazine du  remembers Jean-Pascal “as one of the countless photographers to call at the offices…[his photographs] instantly stood out among the conventional and fashionable work we saw everyday.“ Over time, an intense relationship developed between the magazine and the photographer, “…a friendship of such deep mutual respect that over the next six years five issues would bear the stamp of Jean-Pascal’s photographs.”

Graphic designer Jean-Benoit Lévy (b. 1959) and Jean-Pascal Imsand became friends; both come from Lausanne, both studied at the Schule fuer Gestaltung in Basel, Switzerland.

Lévy made a total of ten posters with photographs by Imsand. Their first poster was for a hairdresser, the idea for which came to Lévy on a plane flight, and Imsand made it for him; a woman with her hair flying.

The haunting  image of a  winged Lausanne Cathedral soaring above Lake Geneva was intended for a tourist poster before Levy repurposed it for an organ recital.

Again the construction of the photomontage is straightforward, but successful only because of the way the images fit together. The joining of the cathedral against the sky and the shores of Lake Geneva is made seamless by selecting photographs taken into the light. The raven’s wing, being dark is an element which can be superimposed last in a series of superimposed printings of each negative, and is printed through an out-of-focus mask held under the enlarger lens.

An unsettling and foreboding poster, Suisse idee ou Suicidee plays on similar sounding words to forcefuly propose that it was economic suicide for Switzerland to have no good ideas for the future.

Neither designer nor photographer owned a gun, so they went to the police station, Lévy posed and Imsand took the picture right there with the borrowed gun, then montaged Lévy’s head with a rock.

Jean-Pascal Imsand’s oeuvre includes self-assigned socio-documentary reportage, though it too, especially his imagery of tough seasonal railway workers, of the wares and buyers in Zurich op-shops, of the mentally disabled in sheltered workhops, and of drug users in the railway wasteland near his apartment, transcends the everyday.

These, which rival his father’s humanist and rather sentimental series on rural life, mark the end of the artist’s creative period, which lasted a mere decade. Despite the encouragement of his wife and former actress Sabina who was his muse after 1989, the artist questioned the quality of his work and talked of returning to painting or of moving into art film or the film essay. 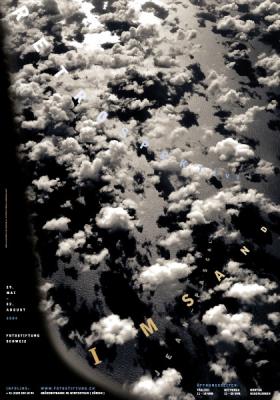 The book accompanied a retrospective exhibition at Winterthur gallery in 2004,  on the tenth anniversary of Imsand’s premature death.

Jean-Benoit Lévy used one of the photographer’s views from an aeroplane window for a poster advertising the show.