He recorded the occasion with a roll of Ilford FP3 loaded into his two-year-old Nikon F, rating it at 200 ASA (ISO). Later that night he processed the film in Ilford ID.11 diluted 1:1 for 8 minutes, a tried and true formula which gained him an extra stop in exposure for the low light situations in which he often shot. I know all that because I have the negative file with the data and date neatly noted on it in his distinctive handwriting.

He was J. Brian McArdle (*1920), a photojournalist and at that time a year into his editorship of Australia’s travel magazine Walkabout issued by the Australian National Travel Association. He was in the process of modernising it, changing the format to that of the US magazines LOOK and LIFE, and with French Reálités and the Sunday Times Magazine (the UK newpaper’s renowned Sunday colour supplement) as models for a more arts and current affairs content mix.

I was then 10 years old and my parents, both 40, had comfortably attained middle class status, he a professional in a senior position and she, ostensibly a housewife, the woman behind the man who spent her days doing, unpaid, the half of his job for which he had less talent and no time; pasting up the galley proofs and photographs…in fact designing and laying out a major national periodical. She also was the mother of three children, of whom I was the eldest.

Here’s our house; a brick veneer of a minimalist modern interior design, with a big bank of windows facing north, brushed aluminium conch up-lights on textured plaster, a Grant Featherston armchair in orange textured fabric, not-quite-wall-to-wall seagrass carpet covering the timber floor, and a pair of 1930s inherited armchairs that my mother reupholstered in dark grey with a deco club magazine table which she painted grey over its dark varnished timber.

The Sunday lunch was a gathering of Brian’s friends; Mirka Mora (*1928, Paris), whose pen-and-ink artwork is pinned to the wall behind her, below, and her German-born husband Georges Mora (*1913) proprietor of the French Café Balzac in East Melbourne in which he hung a constantly expanding display of works by significant contemporary Australian artists. In 1965 the Moras were to open Tolarno Restaurant and Galleries in Melbourne’s free-spirited St Kilda.

They were joined that Sunday of 28 May 1961 by the goatee-bearded Australian expressionist artist Albert Tucker (*1914), just returned from five years in Paris, London and New York and on the rise, having shown at the Venice Biennale in 1956. A significant member of the Heide circle, he had also just divorced Joy Hester. Typically, but unusual for a self-professed bohemian, he is fastidiously dressed in yellow lambswool jumper (it’s the end of autumn), cuffless cords and tightly buttoned shirt.

Leaning in for some bread and cheese is Laurence Hope (*1927), another of the Heide circle of artists, a painter of ‘Lovers, Dreamers and Isolates’, who in 1953 had been ‘adopted’ by the Moras and lived with them for some time. He was to move to England in 1963.

Mirka, only a year his senior, displays a motherly interest in Laurence over the course of this sequence, but otherwise keeps to herself in an odd spot jammed in the corner, bored by the braggadocio conversation no doubt, leafing through the New Yorkers, Réalités and other magazines (my father regularly  brought them home from work). An issue of LOOK lies on the floor.

My mother’s appearance in this series of pictures is fleeting; below she retreats stage right, back to the kitchen. Did she stay and join the conversation? There’s no other sign of her. 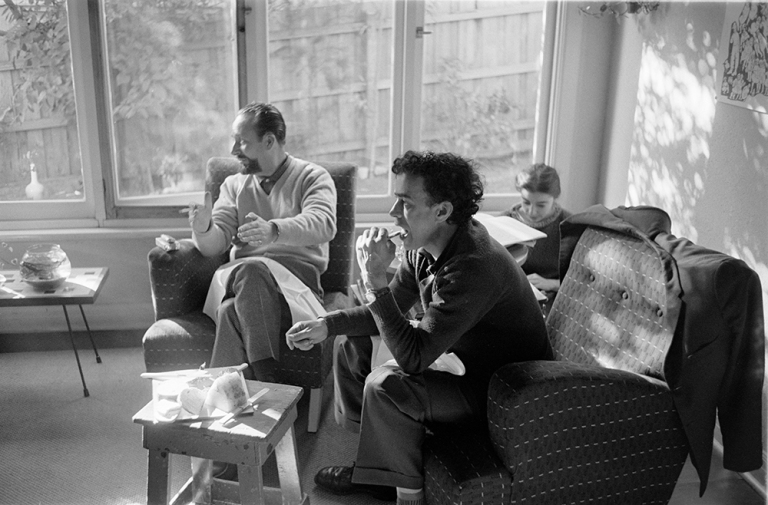 Mirka’s ennui results in a creative move…she pretends to fall out of the window which she has just opened for some relief from the increasingly fuggy atmosphere of Peter Stuyvesant, Craven A and Rothmans cigarette smoke. A flurry of petticoats gains her momentary attention… 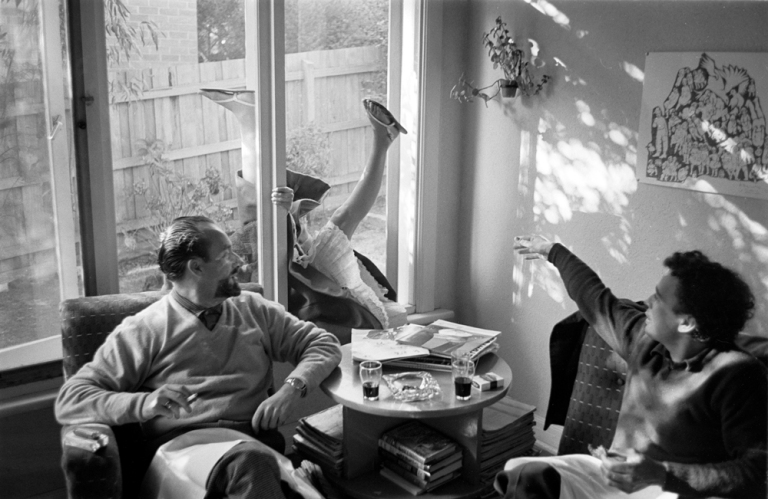 …whereupon she feigns desolation at the inaction of the men in rescuing her from her near demise…before returning to her magazines. 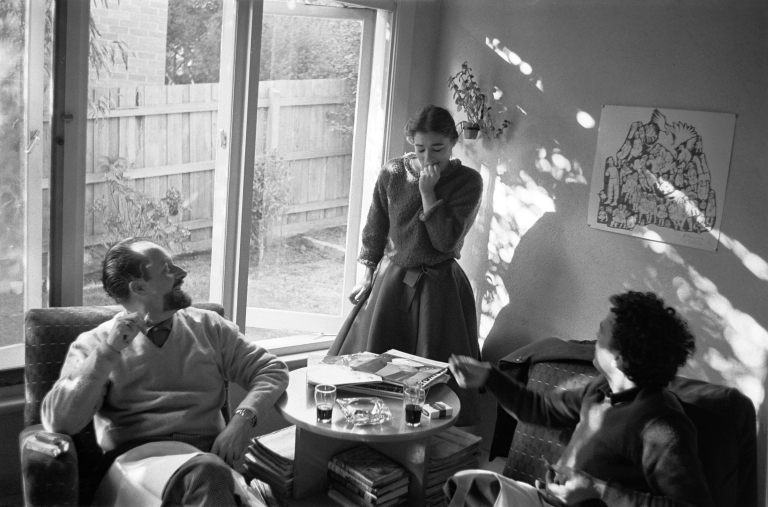 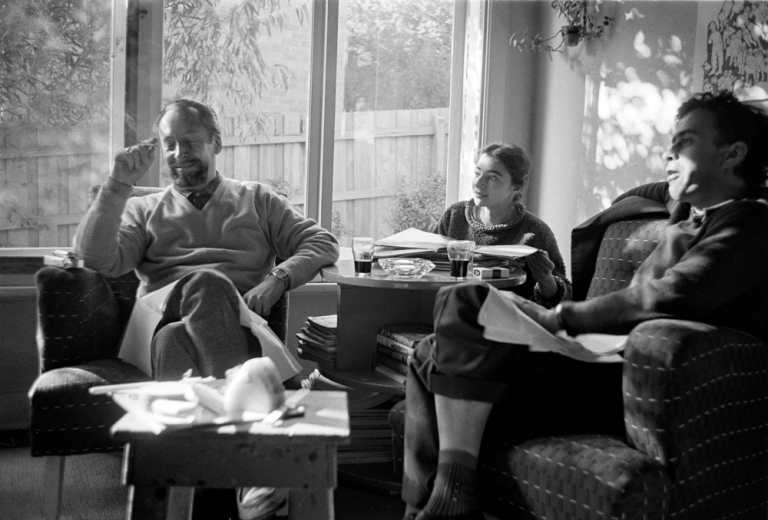 The late autumn sunshine is fading, and Bert picks up an issue of Walkabout.  His ironic, up-slanted cigarette conveys his appraisal. The glasses of Wynns claret have been filled, emptied and filled again, so from here on, the conversation is more animated.

I had always thought that my father had had a few too many when this out-of-focus portrait of Laurence Hope was made. I need to rethink my judgement, because the camera angle and lighting corresponds with Bert Tucker’s line of sight from his chair against the window.

It seems plausible that, being a keen photographer, he has taken charge of the camera, but is not familiar with the workings of the newly-released SLR, or perhaps the 105mm lens my father had just fitted was just too touchy. Mirka and Laurence respond to his attention by fooling around, while Georges reacts with an indulgent smirk. 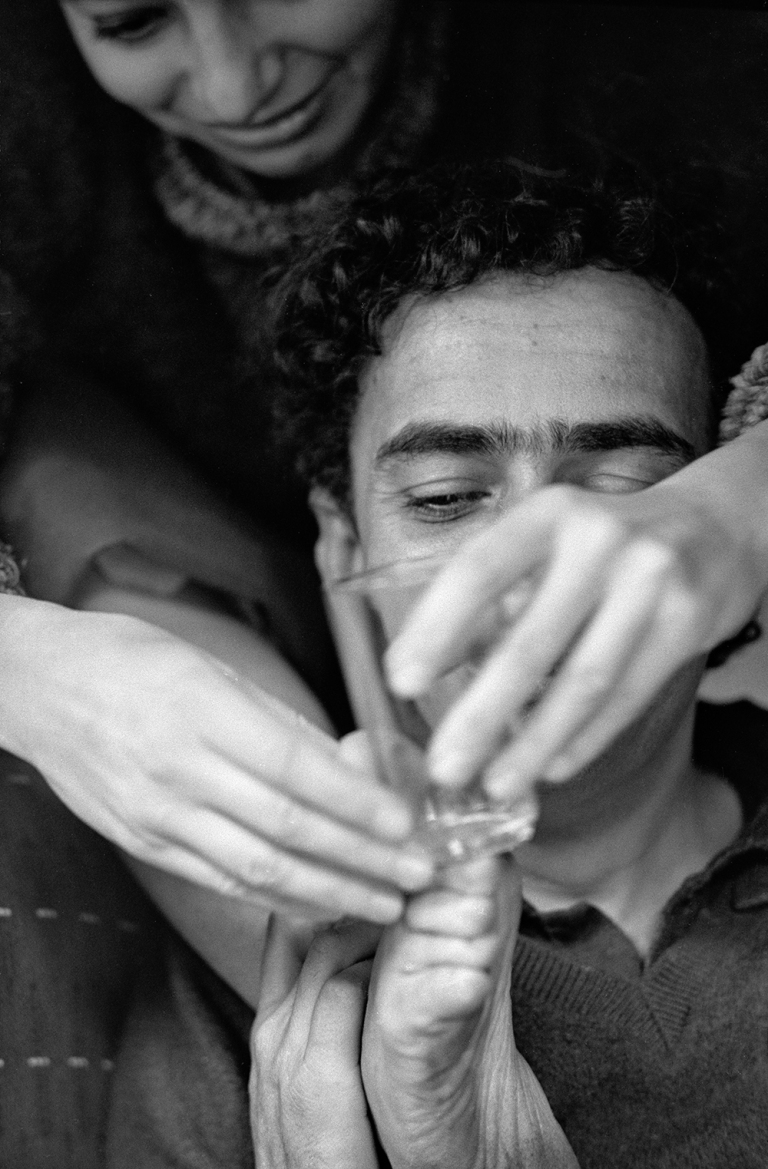 Asserting his ownership of the camera once again, my father goes on to make a series of very lovely available light portraits of Mirka and Georges, before the light at last fades and the Sunday afternoon visitors depart.

It’s the same date, May 28, but in 1969 and it’s Wednesday, and my father is at St John of God psychiatric hospital photographing patients, old and young, who are drawing pictures of ‘home’ outside. It’s a shot that’s well put together.

The sloping sunshine projects my father’s shadow onto the back of an anxious-looking man in the foreground. Brian may be just a silhouette, but I can see his squint and habitually unruly hair. He is taking pictures because he hates group activities and is hiding behind the camera, because he too is a patient there, being treated with LSD and a range of other drugs.

Everything, all of us, had fallen apart. As soon as he returned home, apparently recovered, he died of a heart attack.