May 30: The photograph becomes a monument.

South Australian artist Wendy Muir (b.1960) opens her show But She is the Monument tonight at fortyfivedownstairs, 45 Flinders Lane, Melbourne. The exhibitions continues until 10 June.

It is unusual to see artists dealing these days with saints of the Catholic religion. Muir has been inspired by her acquisition of a 1928 edition of Alban Butler’s four volume Lives of Fathers, Martyrs and other Saints published in 1756. It took thirty years of study for him to complete the these volumes containing the lives of an extraordinary 1,486 saints, many barely known. 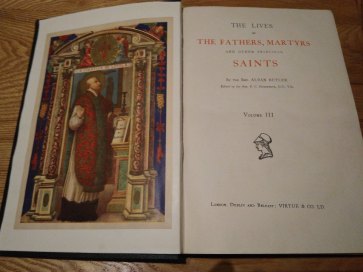 Muir makes paintings and digital prints derived from Butler’s colour plates, the provenance of which has been lost, connecting religion, mathematics and the zodiac to twelve of the saints, all women and imagines them as monumentalised.

The Rev. Alban Butler’s purpose in recounting these stories and images is that since God is the source of the grace by which saints live, a saint is therefore someone whose story God tells, and whose lives are a story of God’s work. Female saints, especially those called ‘Virgin Martyrs’, Muir found, are traditionally represented as youthful, eternal, beautiful and unblemished, on an assumption that piety and beauty are linked. These reciprocal connections are bound up in the idea of the monument and monstrance that are the key to Muir’s images.

The remains of saints are preserved in reliquaries just as is the Eucharist kept in an elaborately decorated monstrance. These hallowed vessels both are often furnished with a small window through which the holy object can be viewed, an optical proof that is celebrated in their display during processions on feast days. Therefore emphasising beauty in visual representations of the saint is a religious act, a challenge that Muir embraces.

A prolific artist, her painting is seductive, colourful and inventive. Forms of landscape and clouds merge and enhance each other in images made on a trip to New Zealand (above). She has adopted the ephemeral, fanciful formations of the heavens and transformed them into monumental stone forms of a kind that are to reappear in But she is the Monument.

Much of Muir’s imagery she discovers and notes with that ubiquitous little window, the iPhone, which is a sketchbook for increasing numbers of artists. It is not lack of talent in representational image-making that prompts this, as the drawing below attests, but rather it is the ever-ready convenience and quality of the photographs the phone camera provides and that are an inspiration for further development.

For Muir the small size of the files hardly matters; the found images are to become part of others, printed and collaged, reworked and overpainted.

In the case of the new series the painting and collage is further elaborated by mysterious geometric signs, numbers and diagrams. Muir notes a coincidental connection with the space in which she is exhibiting, fortyfivedownstairs, in that it is in Flinders Lane, once the home of the ‘rag trade’ in Melbourne; her father was in the fashion industry and dealt with suppliers and retailers there. It is also this stitching and marking up that she carries out in her work, along with her relish of colour, that extends the connection.

One has only to look at Muir’s Instagram feed @wendlesm to find a cornucopia of developments leading up to these works, much of it photomontage and collage alongside paintings made with a free, confident hand that comes of much practice.

The individual works of this exhibition use photographic imagery of stone sculptures in the hard light of a dry landscape that is very typically South Australian. They were taken in Barossa Sculpture Park near Tanunda and GAIA -(GAEA) by Victoria-based jeweller/sculptor Viktor Kalinowski appears in several of Muir’s montages.

Being small prints 10 cm. square, in this case the photographs from small iPhone files form the background which she extends beyond their border with panels in muted colours borrowed from the image. Their small, portable form is reminiscent of Russian or Byzantine icons.

The number twelve that rules Muir’s selection of saints is significant in Christianity, referring as it does to the apostles of Christ, and in the book of Revelation, the twelve gates of the celestial City; the twelve kinds of precious stone of the celestial City; the trees of life, which bear twelve crops of fruit in a year, one in each month; also the twelve “minor” prophets of the Old Testament: Hosea, Joel, Amos, Obadiah, Jonah, Micah, Nahum, Habakkuk, Zephaniah, Haggai, Zechariah, Malachi, and so on.

Geometric diagrams are superimposed on the photographic images of the stone sculptures that seem to measure them, just as the sculptors did in making them, and echo their relation to the saints contained in them with fan forms of stacked angles or rays, rotating lines segments, connected circles, multiple dashes and fine mechanical hatching.

The saints in the illustrations from Butler’s books themselves carry or are associated with geometric solids and patterns; fleurs-de-lis, haloes and headdresses, even a miniature castle, patterned fabrics, and the quills some hold touch points with Muir’s linear rays and angles. Their drapery presents a softer version of the marks of the chisel in the granite and basalt forms in which they are enclosed. These illustrations by unknown artists in Europe are now embedded in these rock forms either as victims on sacrificial altars, or as benign apparitions.

In some ways Muir inherits the photo-collage and tactile forms of Elwyn Lyn (1917-1997), whose Saintly Hill (c.1961) my family once owned which now resides in the collection of the Castlemaine Art Museum.

Muir’s saints thus find themselves in a landscape of the dry interiors Australia, instead of being borne up by the heavenly clouds seen in icons and on cathedral vaults. They are  monumentalised in hewn rock whose gravity and equilibrium they share. Few in our culture have any belief in saints and the Church’s veneration of virginity and martyrdom seems alien, yet our contemplation of the enduring nature of resting stone gives these unworldly, brave and infinitely patient women a home, and remind us of earthly, less sacralised virtues and the beauty of good.