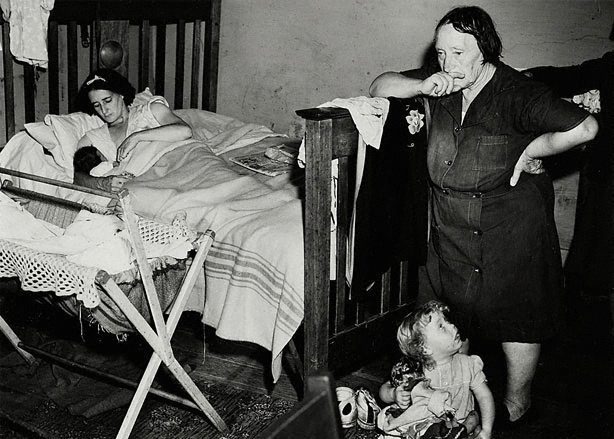 Though both were professional photographers, and both were mentored by Max Dupain, only David Moore could be considered a ‘humanist photographer’, but was that inadvertent?

Moore’s Redfern Interior was selected by Edward Steichen for the exhibition, where he included it in the sweet-sounding section ‘Mothers and Babies’, in which, after by the high-key tones and soft imagery of breast-feeding, and against Eiju Otaki‘s blissfully sleeping babe, Irving Penn‘s sophisticated Vogue mother and Nell Dorr‘s demonstratively affectionate maternity, it strikes a harsh note.

In the catalogue it is shown next to the less romantic Indian maternal scene by anthropologist Gitel Steed but the layout of the book (above) necessarily varies from the arrangement on the walls of the Museum of Modern Art (below), with a subtle difference to our reading.

From 1948 to 1951, when he was not in the studio assisting Max Dupain, or after hours, David Moore stalked the poorer inner-city areas of Sydney taking documentary photographs.  Once, while he was armed with the conspicuous Speed Graphic press camera borrowed from Dupain, he was approached by a woman, who mistook him for a newspaper photographer, to take a photograph the squalid conditions in which a neighbouring family was living. She showed him the “stinking, dark terrace house” and pleaded, “Photograph this and publish it in your paper”. What he recorded in that room, in his own words “epitomised the plight of many slum dwellers in Sydney – cracked and stained walls, a double bed and a rudimentary baby’s cradle with a ragged canvas base”.

Moore returned to Dupain’s studio distressed by his inadvertent imposture and convinced that he would destroy the negative since no newspaper was likely to publish it as he was not a press photographer. Dupain convinced Moore to send a copy on behalf of the tenants to the council, though it was presumably ignored.

I once, in the eighties, gave away as a gift a print of Redfern Interior, paired with Moore’s view of Tower Bridge in a pea-souper fog from the early 1950s, made in London when he had moved there from Australia as an ambitious young photographer (where from 1951-58 he freelance for The Observer, Time, Life, Fortune & Look in the USA, UK, Europe and Africa). I purchased both at Christine Abrahams Gallery in Richmond, Melbourne. Moore no longer felt guilty over his youthful and unintended deceit; the documentary image had become art.

No browser-resolution copy can do justice to the detail in an original 8″x 10″ print from the large 4″x 5″ negative that Moore made. Yes, you can almost read the paper on the bed, but more telling particulars are illuminated as harshly by the on-camera flash; the scrap of rug under the makeshift bassinet adapted from a clothes-drying rack; light also penetrates the space under the bed to reveal a pair of broken-backed sneakers on the bare boards, and the scuff-marks and the imprint of the bed-head on the grubby wall record the history of the room, Meanwhile the matriarch wearily contemplates the future at her feet in the person of the little girl who nurses her doll in imitation of her grim-faced mother. The series of disconnected gazes completes a cycle of poverty and despair.

Today I have been busy putting together another article on a Family of Man photographer, Bill Rauhauser who also walked  his native town, Detroit, amongst local landmarks and through the public fairs and carnivals where his street photographs of  locals along with sideshow acts, and pretty women smoking, lunching, beach bathing or draped over the latest car models at the annual auto shows, record Detroit at the height of prosperity before its recent demise and municipal bankruptcy.

He was also a teacher of photography and one of his papers  “Photography and Reform: A Dissenting View” in the Michigan Photography Journal Issue 6, 1993, is pessimistic about the capacity of any photograph to right social wrongs. The history of Redfern Interior might have served Rauhauser as an example. David Moore, while he went on to contribute many more classics of Australian photojournalism, tended away from the raw edge of poverty and disadvantage that he witnessed in inner Sydney, to concentrate, upon return from England, on a more optimistic, upbeat perspective, much of which was published in the Australian travel magazine Walkabout that my father edited during the sixties.

Moore was, let us say, a circumstantial humanist photographer, and it is clear why Steichen chose Redfern Interior over any of his other pictures.