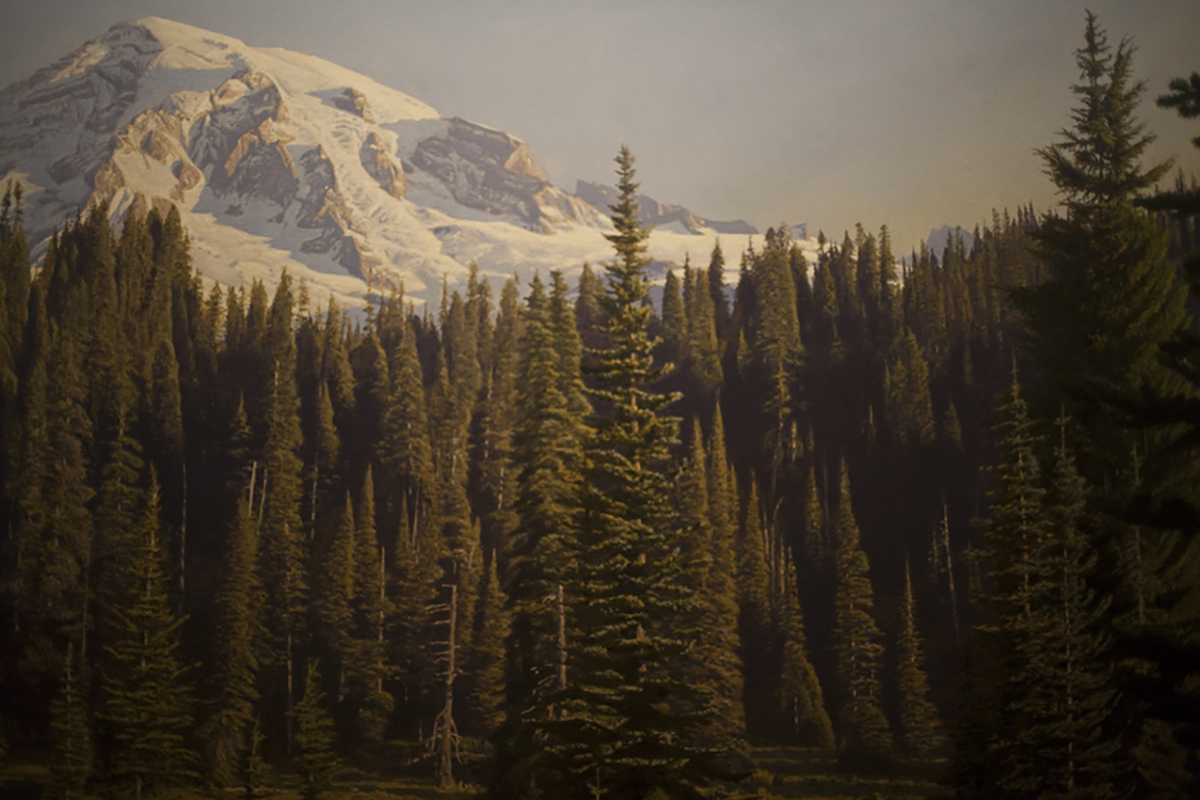 December 15: This evening Foam in Amsterdam will hold a public opening of three exhibitions, one of which is an exhibition by Sofia Borges, another a survey of Hiroshi Sugimoto’s life’s work.

Photography, Borges says, is the image first formed in the eye, which itself is in effect a camera.

Borges’ Estudo da Paisagem (Study of Nature) series of large format, colour prints are from her photographs of sections of the painted background landscapes of dioramas at the American Museum of Natural History. She crops her views of these museum displays to exclude the animals which are their subject, so that the backgrounds might be mistaken for reproductions of old landscape paintings. They are, in fact, the work of James Perry Wilson who painted this panorama in 1948-49, and others like it for the American Museum of Natural History, where possible from photographic panoramas of actual sites, using a careful calculation of scale to produce a seamless perspective behind the taxidermed animals which as a result look as if they are in a larger landscape.

A curious vignetting occurs in the Borges’ image above, no doubt due to the lighting of the diorama which is curved around the animals that we do not see in the foreground. The thread-like waterfall reminds the viewer of a famous image by Ansel Adams; we wonder is this Yosemite and that the Bridalveil Falls seen from down in the valley at a much balmier time of year than Adams’ 1944 Clearing Winter Storm?

What would be the depicton of atmospheric haze in the mural painting on closer examination is found to be enhanced by the lighting in the showcase and reflection from its window. Shadows intrude in others of Borges’ series, and in the case below, the subtle scoring used to curve the diorama panels shows up, also with the reflection of the museum ceiling lights.

These deliberate, but subtle, distortions with extraneous visual details such as scratches, reflections, and shadows heighten our perception of the decay of the original paintings as well as our nostalgia for the strange romance of the museum diorama that they enhance. The fact that the paintings themselves come from photographs is a fact not immediately obvious in Borges series. By comparison contemporary  National Geographic photographic representations of natural history have a high-energy hyperreality.

Is it coincidental that Foam is simultaneously presenting a survey of Hiroshi Sugimoto that will include his Dioramas (1976-2012)?

Among the first pictures that brought Sugimoto to fame were ones he began more than 30 years ago of dioramas at the American Museum of Natural History.

These photographs too present successive stages that Sugimoto compares to fossilization; shot by the naturalist’s rifle, frozen into a ‘natural’ pose by the taxidermist and inserted to a realist scene by the diorama artists, photographed and then printed in monochrome by Sugimoto, in prints which fool the eye with an uncanny petrification that is even more effective than the original museum display. And for the first time in more than two decades he returned in 2012 to the dioramas to continue working through further ideas that they inspire in him. (He was there last in 1994, previously in 1982, and initially in the late ’70s.) His series then focused more often on scenes including animals, but in the 2012 series the older Sugimoto sees as a vision of the earth after humankind and most complex animal life have disappeared.

“Maybe it is my age,” he said during an interview with the New York Times, “I’m starting to take a very long view. In a 100 years, if we weren’t here, this whole city would start to look like a forest again.”

Sofia Borges (Brazil, b. 1984) received her BA in Visual Arts from the Universidade de São Paulo in 2008. She’s currently living between Paris and São Paulo. Her project The Swamp won the Mack First Book Award.

Over a seven-year period Borges’ has created her own museum of the image, making countless visits to natural history museums, zoos, aquariums and research centres, where she collected with her camera objects and displays that emphasise the artifice of representation. What glares back at you from the depths of The Swamp is not the thing itself, but the image, of an image, of an image, a conceptual mise en abyme.

“What I seek are images, which, in their very artifice, are able to present themselves as a problem”, Borges has said. Museum objects, portraits, illustrations, rocks, fake rocks, paintings, animals representing animals, collages or even images of her studio are combined in the book, becoming a monster, a chimera of petrification that is our continuously failing attempt to represent reality.