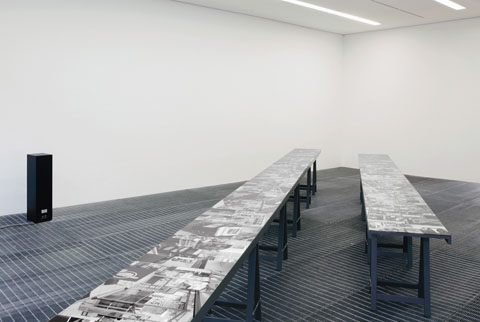 January 7 is an outstanding day in the historical photographic calendar. On this date in 1839, members of the French Académie des Sciences were first shown photographs; the invention of  Louis-Jacques-Mandé Daguerre (1787–1851), a Romantic painter and printmaker.

Even now, the first time you see a daguerreotype, you will be astonished as the image emerges from reflections in the highly polished, silver-plated sheet of copper. It produces a facsimile what is projected by the lens, the same size and exactly rendered in all its detail, only reversed laterally, like a mirror image. It is not an enlargement and not a contact print. Pick up a lens, point it at a wall directly opposite a window and adjust the distance until you see an image form there. Imagine lifting that ephemeral picture off the wall; that is a daguerreotype. Formidable!

Daguerre was famous for another spectacle, the Diorama, which he invented with Charles Marie Bouton, and first exhibited in Paris in July 1822 and in London in September 29, 1823. It was an illusionistic entertainment immensely popular with Parisians, but nothing could prepare the world for the revolution that was the daguerreotype.

The most frequently reproduced evidence of the effect of the arrival in French society of this new means of imaging is a “fantasy” of Maurisset entitled La Daguerréotypomanie, a remarkable satirical lithograph dating from the end of 1839 or early 1840, It depicts an hysteria sweeping the land. A huge crowd, stretching into the far distance on a landscape that appears to have been swept clear of all else, clamours to admire or consume the latest innovations in the field of photography. 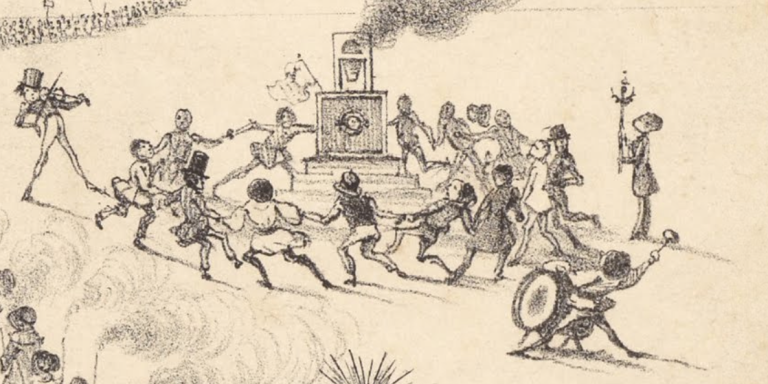 …as the invention spreads across the world, transported to its furthest corners by steamer,…

…but bringing despair to traditional artists and engravers who are driven to renting gallows for their penniless departure to another world,…

while people flock to have their portraits made, the poorer classes for the first time, attracted by the prospect of having an image in a mere 13 minutes that would have taken a miniaturist many hours, and cost more than they could afford,…

only to discover its shortcomings; long poses that were a trial for children,… 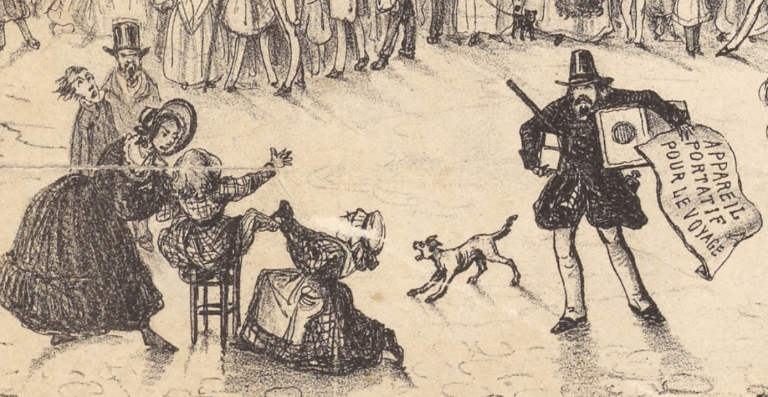 …and torture for any sitter.

The daguerreotype did not manifest as suddenly as the French government’s announcement might have led the world to believe. Nicéphore Niépce had been working since the 1820s on the problem of recording a permanent image from the lens of the camera obscura using only light and chemistry and had actually achieved real results as early as 1826, though requiring exposure times of hours or days.

Daguerre, who had been working along the same lines, formed a partnership with Niépce  in 1829, but by the time Niépce died in 1833, the partners had yet to come up with a commercially viable process. It was in 1838 that Daguerre was confidently able to show examples to potential investors amongst selected artists and scientists. Astronomer François Arago (1786-1853), astonished at the quality of a daguerreotype of the moon, championed Daguerre’s invention in both the Académie des Sciences and the Chambre des Députés, securing the inventor a lifetime pension in exchange for the rights to his process, though he wisely retained the patent on the equipment necessary to practice the new art.

Thus it was that on January 7 François Arago announced the discovery at the Académie des Sciences in Paris , though he did not credit the work of Joseph Nicéphore Niépce (the oversight was corrected in the following days by Francis Bauer). On August 19, 1839, a joint session of the Académie des Sciences and the Académie des Beaux-Arts was taken through the revolutionary process. Outside an eager gaggle of spectators and reporters crowded the courtyard. The lifelike detail of the images was magical; journalist Hippolyte Gaucheraud, had scooped other journalists with his description of a microscope image of a dead spider enthused: “You could study its anatomy with or without a magnifying glass, as in nature; [there is] not a filament, not a duct, as tenuous as might be, that you cannot follow and examine.”

One hundred and seventy-eight years later do we feel ourselves inured to the wonders of the photograph?

Brussels-based Stephanie Kiwitt, who is showing Dialogues at Camera Austria until February 2, poses a fundamental question as to whether photographs, with their exasperating, centrifugal plenitude of realism, are capable of generating meaning from the kaleidoscope of our cultural reality, to access it out of the tension between what the artist encounters and the images themselves.

Kiwitt’s series “GYM” or “Choco Choco” paradoxically appear randomly created, documentary, and purposefully designed like an advertisement, all at once. Dialogues re-orchestrates her projects and books of over several years to build new relationships from one picture to another which seem the result of both planning or coincidence, where beauty and repulsion, fascination and revulsion collide; dialogues in fact.

‘Eye candy’ is Kiwitt’s subject, or its opposite. Bodies and chocolate or commercial clutter and demolition detritus. All are photographed with the fastidious attention to detail of a top advertising photographer. Everything shot on location looks like has been set up in the studio. Backgrounds are carefully selected or cropped out altogether, nothing appears ‘lit’, all is smooth, seamless, gepflegt. Framing is uptight, squeezed until only the ‘juice’ of the image remains.

Bodies, in GYM, being driven to become better built, healthier, more beautiful also betray an unpleasant social pathology of self-love or a fixated competitiveness. The machinery of the ‘fitness centre’ is set beside the bodies it is used to make fit, and we are struck by the way the bodies symbiotically fit the machines, by the way the gym machine designers develop a mimesis with the human form, structure and substance. 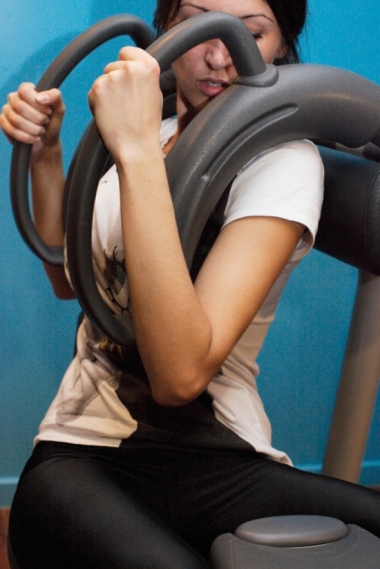 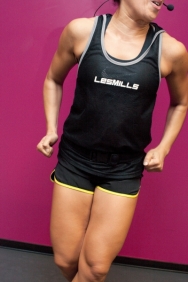 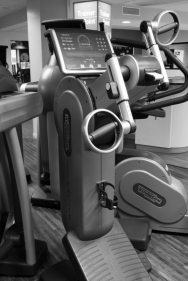 The photographs from Choco Choco, taken in craft workshops and chocolateries where it is produced as a luxury good rather than for mass consumption, show streams of unctuous substance that is both an indulgence and an addiction, and the product of perfection. In setting black-and-white imagery against colour Kiwitt discomforts our relation to this substance. Slight smudges of chocolate on the workers white costumes and caps present detail that we are forced to try to ignore and yet cannot – chocolate looks like dirt, like shit. 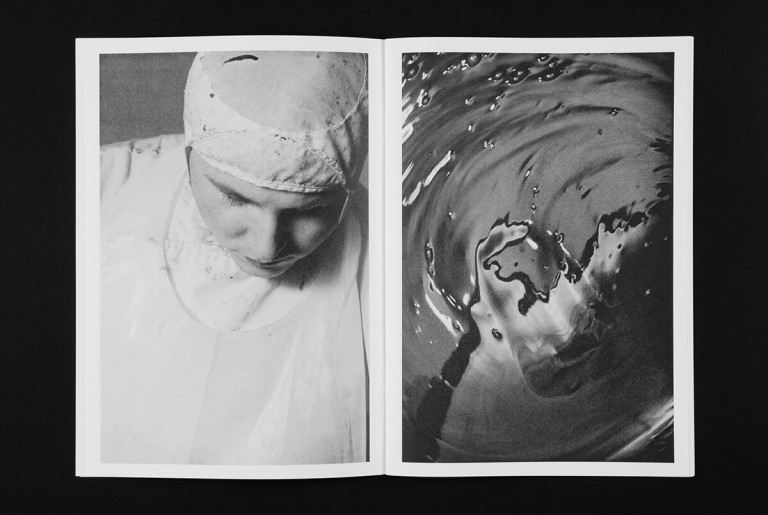 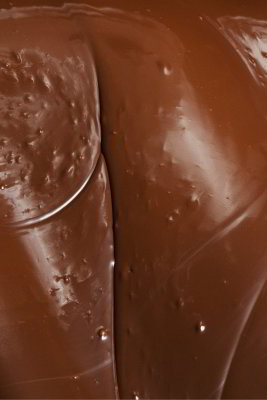 Capital Decor makes most use of photographic compression. Kiwitt depictsthe overwhelming and indigestible ‘point of sale’, in a number of manifestations and installations, one (below) in a suburban mall with its cheap coloured concrete pavers, and another in a folio that includes sound on a white long-playing record (‘white noise’?).

Clamouring for our attention as fleeting as it is, are the advertisements, banners and signs of the marketplace that have been with us since the early Modern of the daguerreotype period, only now more colourful, more temporary; ephemera, like the products they sell. The eye cannot rest on Kiwitt’s images here with their flattened, slanted ‘pop-up’ perspective and disturbing conjunctions. 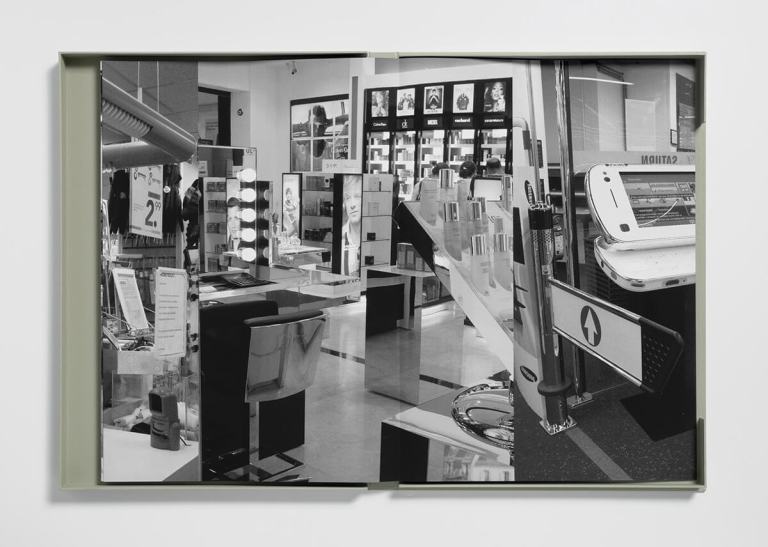 In exhibition, the images stream across benches in seamlessly adjacency in a fanfold over 12 metres long. Black and white, or the magenta and yellow printing employs in Dialogues, homogenises the material but does not withdraw or neutralise the dissonance of remembered gaudiness which seems to well up into the images from our own jaded, impatient experience of the marketplace.

Theodore Maurisset’s Daguerreotypomania may have seemed fanciful in 1839 at the dawn of  photography, but Kiwitt’s work validates it. Photography is ubiquitous and its subject matter is ubiquity.