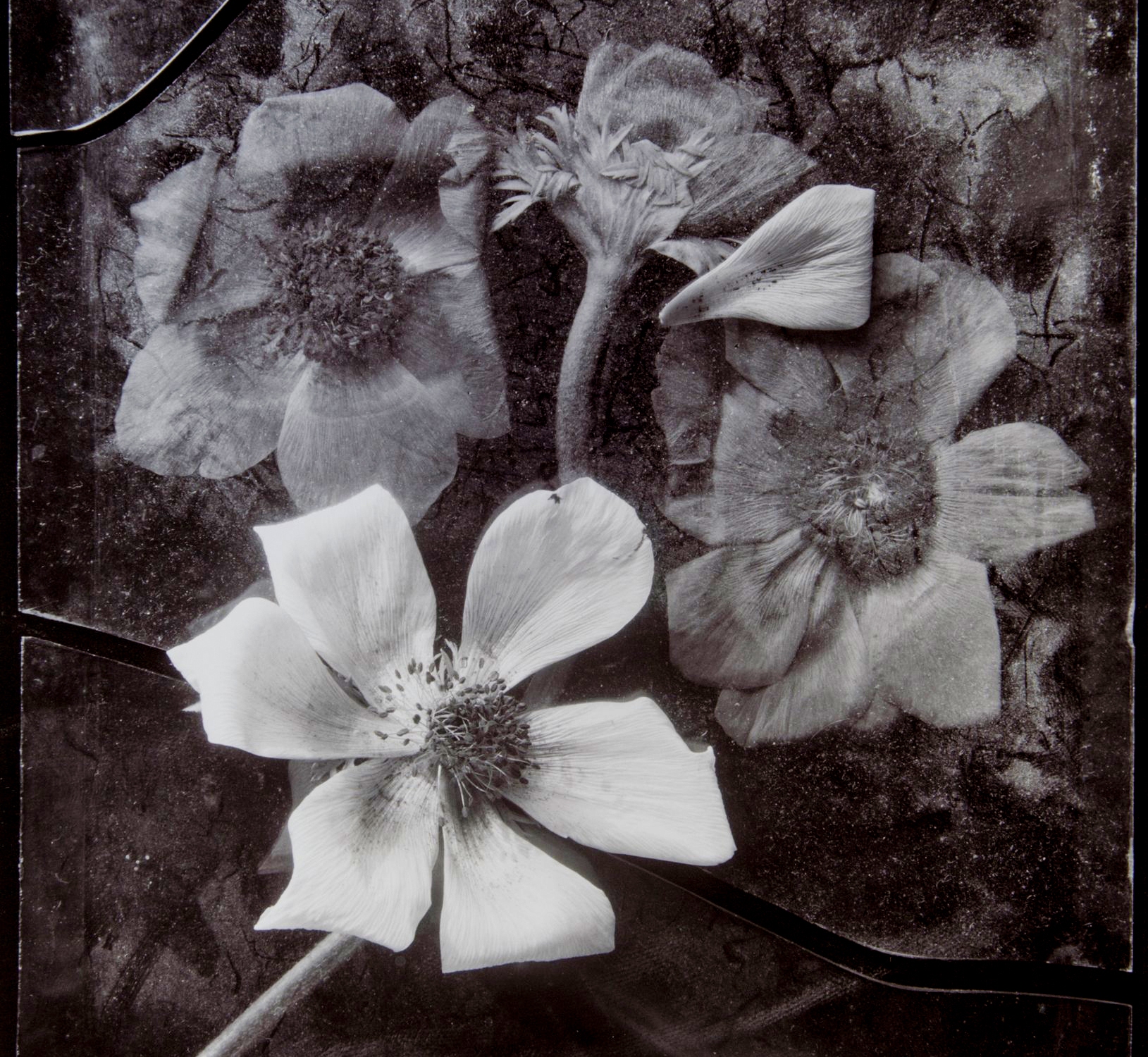 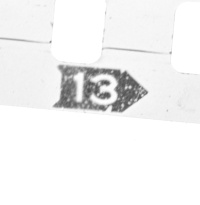 The generosity of people who love photography is extraordinary.

One has only to flip through a few web pages to see how many awards there are for young and more established photographers. This has been especially the case in the UK.

Rich resources are increasingly available; I recently re-discovered the entire back-catalogue of The Photographic Journal from 1853 to 2018 uploaded at the instigation of Dr Michael Pritchard, full scans with selectable, searchable text and good-size, well reproduced illustrations. It was particularly useful in finding out more about John Blakemore who in latter years was nominated by Fay Godwin to be an Honorary Fellow of the Royal Photographic Society who publish the Journal. 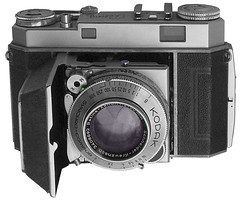 Blakemore’s background is in Coventry and the West Midlands and he might have continued in a farming career had not National Service intervened. In 1954 he was posted to Tripoli which since WW2 had been taken over from the Italians by the British. He was appalled by the attitudes of his fellow servicemen to the Arab population. Inspired by a story on The Family of Man exhibition in a Picture Post magazine sent to him in Libya by his mother, he learned photography in the darkroom of his army camp and sent off to Aden for a Kodak Retina II.

On his return to England Blakemore lived in Vernon Street, Hillfields during the beginning of the 1960s, a period when it was just starting to be ‘cleared’ of the bomb damage remaining twenty years after the blitz, and of ‘low standard’ housing — i.e. demolition of the Victorian streets to make way for tower blocks and a school. He documented its people, many of them recent immigrants, from the humanist perspective adopted by Family of Man contributors, particularly the French, seeing it “as a way to change the world.”

I saw The Family of Man as being about differences of opportunity and social possibility, rather than the commonality of human experience. I felt, rather naively, that if you put a copy of it on the desk of every world leader, they would see the error of their ways.

Here is a shot from his time freelancing for Black Star agency, made in John Gulson School which he attended as a child.

After marrying, he took work as a professional photographer, at one point teaching himself the portrait business when he took over an existing studio. In 1970 he was invited to join a business colleague Richard Sadler at Derby College of Art (upgraded to University status in 1992), where he taught until 2001 when he became Emeritus Professor of Photography. He was widely influential through his additional teaching in Colin Thomas‘s community project, Aware Photographic Arts in Liverpool, and workshop series at The Photographer’s Place in Derby, among many others, and was still conducting printing workshops in his eighties.

On moving to Derby he turned his attention to landscape. The motivator was being asked by his students to join them in an exhibition. The experience of photographing trees in Wales revived his youthful enthusiasm for the natural world that he had forgotten;

As soon as I arrived I felt spiritually akin with it. It had an overwhelming effect on me, a land of paradox, harsh lunar landscapes running with gurgling water and supporting everywhere a riotous life. From the very rocks trees stretched upwards, life at its most tenacious gripping convulsively at the unyielding rock and waving twisting in the unrelenting wind. Limbs green with the parasitic growth of moss and lichen which weld tree and rock into one entity. Trees grey and armoured as the rock itself. Wood froze to the rock for the struggle for life and overall a sky as subtle and ever changing as the landscape itself.

Searching for means by which to express this ‘riotous’ life and its ‘stretching,’ ‘gripping,’ ‘convulsing,’ ‘waving,’ ‘twisting’ and ‘struggle’, and moving on from the slo-mo capture of water flow over rocks we so often see (though Blakemore did it better), he experimented with multiple exposures in the series later published as Inscape, the title borrowed from Gerald Manley Hopkins (he of the Welsh sonnet The Windhover).

On the same negative he makes longer exposures as the wind blows, over a shorter, which captures the detail in stillness. The results are landscapes which seem to thaw; the stock stasis of the photographed state is softened and dissolves under a pervading energy asserted, it seems, by Nature itself.

An opposite effect was used by my own teacher John Cato in photographing grasses in the dunes of the Coorong. His multiple exposures made between gusts showed that each frond would settle exactly to its original position so that by timing the repeated shutter openings he could produce a static image.

After his show of the Lila series at The Photographers’ Gallery, London, Blakemore found himself no longer able to photograph in the landscape, as much because finding untrammelled spaces was becoming more difficult as for “a number of other reasons,” and turned to what was in his immediate surroundings to make work that he showed in 1985.

He experimented with ‘details’ of the landscape, often from his own garden; in this case Pampas grass leaves taped to a makeshift lightbox, his window, using reflectors to fill the shadows. 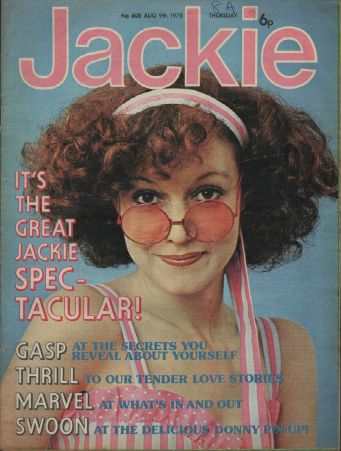 It was in researching Blakemore in order to expand the existing profile sketch on Wikipedia that I encountered Rhonda Wilson’s perceptive comment, about his work in the late 1980s, reported by Simon James in an issue of the Journal:

she considered how so many of Blakemore’s admirers waxed lyrical over the seductive beauty of his still lives, without discerning the more savage element of their construction, and the metaphors implied. For the delicate flower still lives include subjects dissected to reveal their reproductive organs; along with other examples of the same flora deprived of the water that would have extended their existence. Allowed to wrinkle, shrivel, and dry, they attest to their brief mortality: instigating thought trails leading perhaps towards humanity’s own transient tenure on life.

It was in 1991 at Wilson’s gallery Poseurs in Birmingham, which she started in 1989 with Ming De Nasty, that Inscape was first shown outside London where it had launched at Zelda Cheatle‘s gallery with Blakemore’s 1991 book of the same title.

A native of the city, and 17 years younger than Blakemore, Wilson was born (*1953) into a generation of women with a very different take on humanism. A designer, she started out on Jackie magazine in Dundee, becoming its agony aunt and music reporter, but returned to Birmingham in 1980 where she edited Insist: The Birmingham Women’s Paper and agitated against women’s low wages and homelessness in a series of exhibitions for which the subjects perform themselves, about which American photographer and lecturer Martha Rosler remarked in a 1995 essay Images as Sites of Struggle:

Some photographers reject “humanist” documentary, with its multiplicity of buried texts about powerlessness. Rhonda Wilson, of Birmingham, England, wittily staged images for her poster series on women and homelessness in England 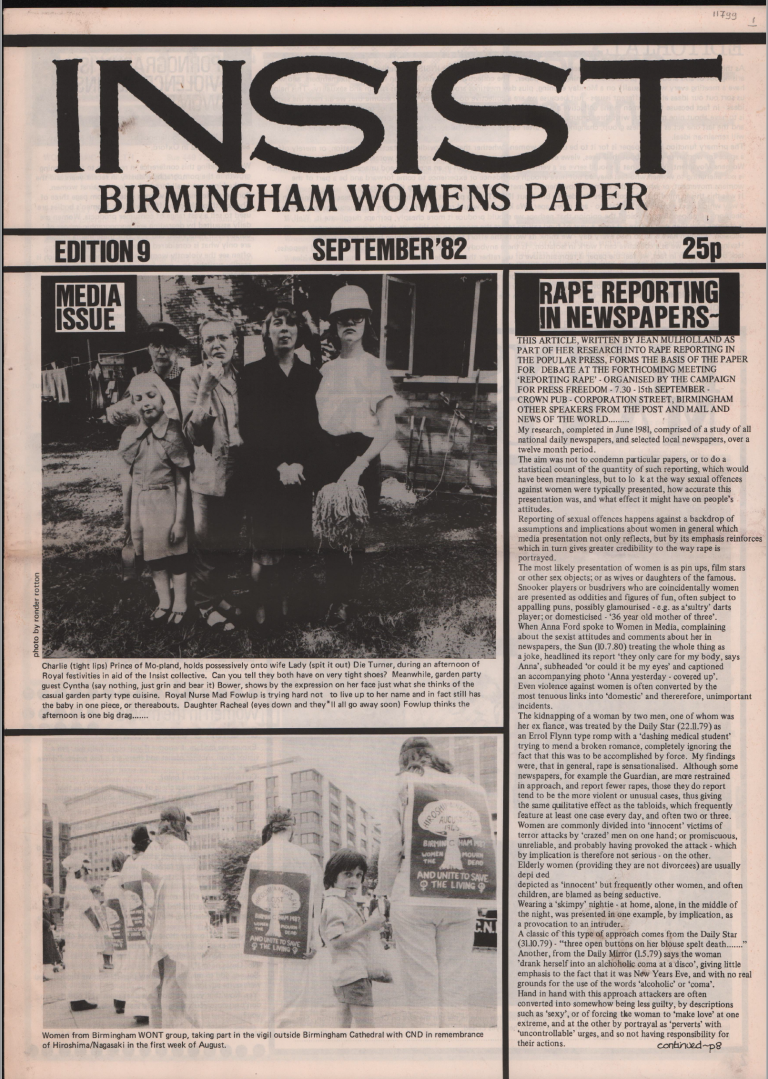 At the Arts Lab in Gosta Green, where she held photography workshops, she would have discovered its poster-printing facilities, and perhaps one of the products was her poster for important Birmingham exhibitions documenting war in Central America, by Susan Meiselas, and by John Hoadland and Richard Cross. At this time 1988 – 1990, while also on the staff of Ten.8 magazine and organising its exhibition touring program, Wilson was undertaking a Master of Arts in Photographic Theory at the University of Derby, where Blakemore was a lecturer.

I can find no record of their interaction at Derby, though Wilson’s commentary on Blakemore’s work is contemporaneous. It marks a divide in British photography that was being echoed elsewhere. Her words come from a feminist perspective conscious of the socio-political context and potential of images which is external to the transcendental aestheticism of Blakemore. Wilson was by then part-time lecturer at the Nottingham Trent University when she secured a £3,500 Arts Council grant to publish Seeing The Light: The Photographers’ Guide to Enterprise (1993) just after Blakemore’s Inscape appeared in 1991. 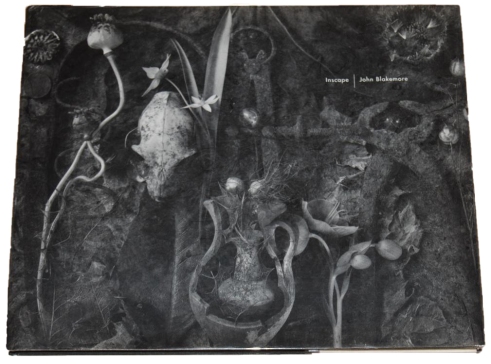 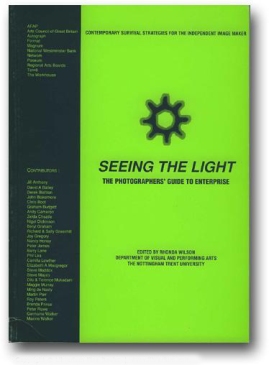 The modern/postmodern divide can be read in these two academics’ books. Wilson’s came out of an activist approach to photographic enterprise – artistic, documentary or professional – that she applied in new subjects she introduced in the course she taught; ‘Survival Strategies’ and ‘Professional Practice’ with guest lecturers who were curators, photographers and agents.

Out of the book and her teaching came her organisation Seeing the Light at her Rhubarb-Rhubarb office in The Custard Factory in Digbeth, dedicated, she announced…

…to the belief that talented photographers need supporting skills to support their practices and embrace their dreams. Weekend events, short courses and publications, bring together those imagemakers who wish to have a future in the sector with those who are at the leading edge […] Seeing the Light came across issues which face any imagemaker. How to be viable, creative and imaginative in a time of change. How to ensure that there would be a future, not only for myself, but for those people upon whom the organisation depended. How to support financially a growing team, on fixed or flexible contracts, bringing in those crucial skills when necessary. How to connect internationally with those people around the physical world to increase opportunities.

Most influential, aside from the many exhibitions of others’ work she organised, were Wilson’s portfolio reviews available to any photographer at a modest price, modelled on those she saw at Houston FotoFest, all conducted by professionals at significant venues, like editorial and advertising photographer Colin Gray at Glasgow’s Street Level Gallery; Head of Art Buying at DDB advertising agency in Paris Elaine Harris; Professor Paul Hill FRPS, MBE, Birmingham; artistic director of Photo ’98 Anne McNeill in Huddersfield; Canadian artist Evergon at Zone Gallery in Newcastle upon Tyne; photographers Fay Godwin and David Noble in Bedfordshire; documentary photographer Judah Passow from Leicester’s Picture House; British Journal of Photography editor Reuel Golden; and Exhibitions Officer Carol Sartain and Secretary General Barry Lane of the RPS in Bath.

Most important to Wilson was the encouragement that the reviews gave to women, the young, and members of diverse ethnic groups who were entering the industry in greater numbers.

Tragedy befell her after Rhubarb-Rhubarb’s folio reviews and exhibition in Birmingham from 30 July to 2 August 2009 that attracted 130,000 visitors, but coincided with the recession, so that when she returned after a hip operation, funding cuts were taking effect. Becoming severely depressed she took seriously ill, was unable to work and the threat of losing her house to afford treatment hung over her. Despite a successful crowd-funding campaign on her behalf she died on Thursday 6 November 2014.

Rhonda Wilson is remembered for her generosity in helping other photographers realise their dreams. Despite her remarkable life, it has required much research to join its threads for the Wikipedia profile I have been writing on her, and none of her own photography is anywhere available to see.