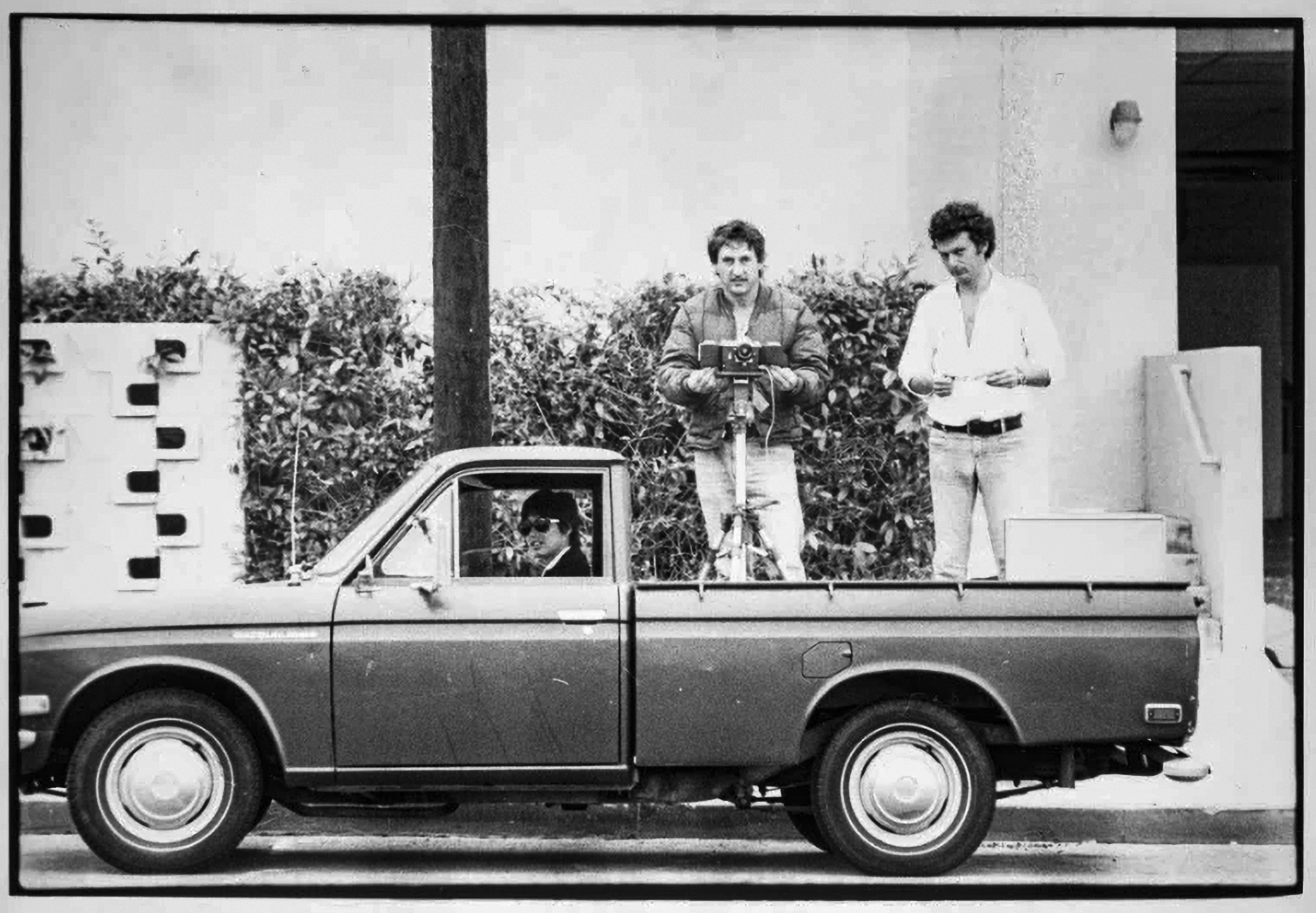 How close are the conceptual and the documentary?

Over on my old blog (and here) I have ruminated on John Gollings’ Surfers Paradise take  on Ed Ruscha’s 1966 Every Building on the Sunset Strip, a book that is a leporello; one long, continuous page showing just what it says on the cover…every building, but also the cars, some of the people (no-one walks in LA), the ephemerals of advertising and flora; it constitutes a sweeping slice of history. 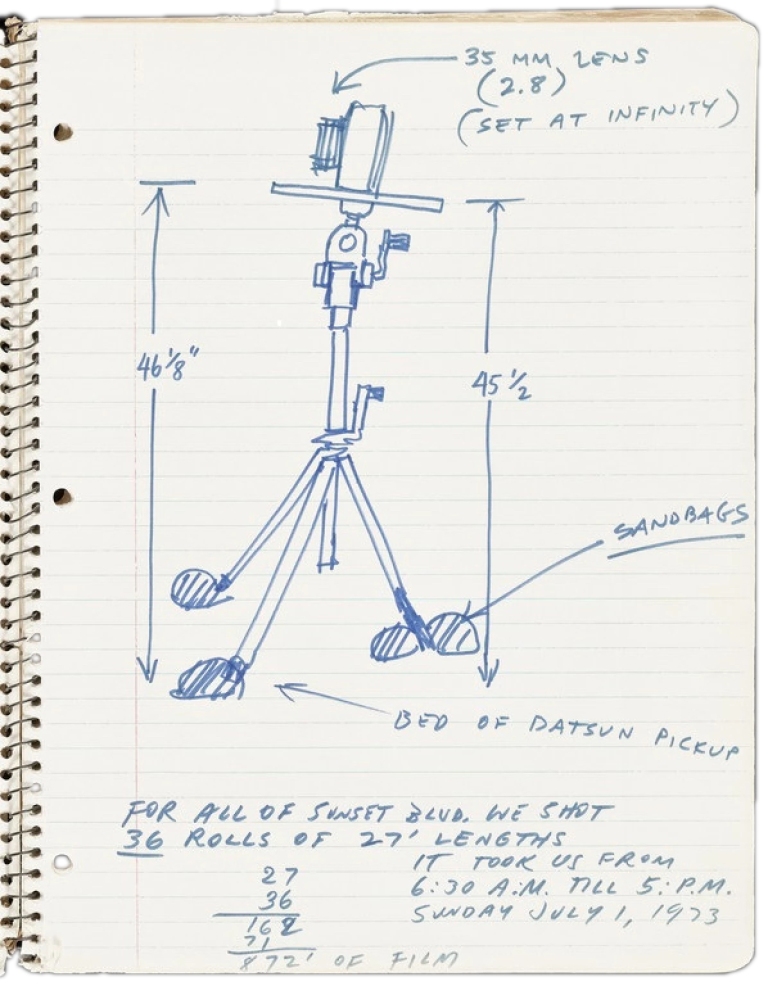 Ed Ruscha (1973) diagram of camera set-up used for photography of Sunset Blvd. From the Streets of Los Angeles Archive. The Getty Research Institute

That the work was conceptual, rather than documentary, is evident from his project of the following year, 1967. Ruscha with the driver of his 1963 Buick Le Sabre, Patrick Blackwell, made his Royal Road Test involving another stretch of highway and a Royal typewriter, a model X, which his other accomplice Mason Williams, hurled from the car as it sped at 150km an hour. The fastidious documentation recorded in the resulting book sets out the picture sequence and gives the bare facts:

But the book’s epigraph makes the intention clear:

It was too directly bound to its own anguish to be anything other than a cry of negation; carrying within itself, the seeds of its own destruction.

In the 2016 movie California Typewriter, Mason Williams, the ‘Thrower,’ explains that this is a quotation of the last sentence of the Encyclopedia Britannica entry on “Dada,” a movement which itself generated  random masterpieces like a thousand monkeys thrashing the keys of typewriters.

Like László Moholy-Nagy‘s EM 2 (Telephone Picture) of 1923 for which he delivered his instructions by telephone to an enamel factory in Weimar, Germany which manufactured it, Ruscha’s recipe could be reproduced, as it was by Australian Kim Corbel for the meteoric destruction, in the Arizona desert in July 2012, of a computer in his Two Lane Laptop.

Ruscha (a.k.a. Eddie Russia) went on to document both sides of many major Los Angeles roads, including the rest of Sunset Boulevard, the major thoroughfare in the cities of Beverly Hills and West Hollywood of which a 2.4km portion is Sunset Strip; Santa Monica Boulevard; Melrose Avenue; and Pacific Coast Highway, all shot between 1973 and 1975. Before 2007 he shot more than 25 other Los Angeles streets.

These days of course, Google Street View is doing the same work in digital, automated form, but without the choices that Ruscha, Gollings and Corbel exercised, to consciously shoot at chosen times of day, in certain light and traffic conditions, and to consider which side of the street to photograph first. Better still, the Getty has turned Ed’s book into an online interactive

Back here in Melbourne at about the same time, at the end of the 60s, there were people not quite so excited about thoroughfares and bypasses. Plans had been afoot since the mid-50s to ‘improve’ the city; a ring road and freeways to the outer suburbs was to cut an actual, more destructive sweeping slice through old inner suburbia. The plans went hand-in-hand with the high-rise housing blocks that were to surround these motorways.

Town planning rarely actually is planned, since it is usually reactive, not visionary, being administered by those whose horizon is the next council, state or federal election.

Happily, State Premier Henry Bolte and the Melbourne Metropolitan Board of Works were served notice by the residents of Carlton, Fitzroy and Collingwood and so a gap remains between the Eastern Freeway and the Tullamarine on either side of the CBD, though of course there is no gap in the traffic, which just slows down to spew more exhaust through the front windows of tiny terraces and into the lungs of the citizens of the inner suburbs. The MMBW Planning Branch published Melbourne’s inner area— a position statement, 1977, in which it admitted that;

[G]reater public awareness of and concern for the environment has led to a rapid increase in both the numbers of such groups and in the level of their activities in recent years. Individually and collectively, these groups have been extremely effective in certain policy areas, eg opposition to the Housing Commission’s high rise flat policy, [and] to the inner city freeway proposals … Virtually all the 15 inner municipalities have their own residents’ associations, tenants’ associations, environmental groups or transport action groups … They are becoming more influential and are being acknowledged increasingly at both local and state political level … Many community groups … help sponsor the umbrella group, the Committee for Urban Action. This Committee, with many professional planners in its membership, carries out its own research, takes up wider issues, and is active in political lobbying … To sum up, there are a considerable number of special interest and community groups whose interests lie within the Inner Area … Future planning policies are likely to have to take into consideration the views of such groups.

It was while writing a Wikipedia article on Castlemaine Art Museum to replace the undeservedly scant mention it had in an entry on my town, and seeking out historical pictures of the building, that I made the discovery — new to me — that photography just like Ruscha’s was being done almost contemporaneously with his, but in Castlemaine, and for more political purpose.

Piecemeal development irretrievably ruptured of many of our beautiful Victorian or Edwardian streetscapes, most of which were never recorded. Town planner Michael Read was a member of the Committee for Urban Action, an alliance of inner and outer suburban resident’s groups seeking to develop a framework for identifying  areas of historic character in inner Melbourne to counter the depredations of developers.

A strip photographic record, like Ruscha’s was made with a $6000 grant from the National Estate for surveys of Fitzroy, South Melbourne and East Melbourne, and a further grant of $25,000 was made for plotting and producing strip photographs with  Richmond, Collingwood, Prahran, Hawthorn and Williamstown, the urban areas of Bendigo, Castlemaine, Chiltern and Beechworth and their neighbouring shires being given the priority

Activist volunteer Barbara Nevin of the Emerald Hill Association which saved Middle Park was made project director of work jointly done by the Committee for Urban Action and the Royal Historical Society of Victoria.

Six photographers, whose names I have not been able to discover (does anyone know them?)  had six months in which to complete the project and Niven issued a call to residents of the subject areas:

I am very anxious that where interested groups exist in the study areas, they should come to me. I will need their help. I see my role as, perhaps, bridging the gap between the town planning and architectural disciplines to be used in the survey, and the man in the street and as helping co-ordinate projects that are already going on. I hope the project might also put an end to unnecessary duplication of effort in this field.

Anne Latrielle writing of the project in The Age on Wednesday April 16, 1975 wrote:

The investigation areas in Melbourne have been wisely chosen but it eludes me why the National Estate people settled on some of the country areas. Surely the historic nature of Beechworth, for instance. is well enough documented already. And surely there are other towns where the need for research is far greater.

To my eyes, as a denizen of the region, those are a city-slicker’s words.

Barbara Nevin donated to the State Library of Victoria in 1977 the resulting huge collection of more than 2000 rolls of 35mm film – over 70,000 photographs in all and they form the basis of the heritage overlays still used in town planning today.

The Library’s 2014 Annual Appeal raised funds to deliver these photographic records to  an even wider audience of students, artists and historians a pilot project to digitise 3000 images from the collection, of  streetscapes of a selected block in Fitzroy and the streets of Castlemaine.

Among the images are these made, in the late afternoon, as the shadows indicate, of the south side of Lyttleton Street, between Barker Street (the main drag) and Kennedy Street which runs beside the railway line from Melbourne. Judging by the perspective, they are made while walking, not from the tray of a ‘pick-up’, and though intended to be factual records they are not entirely artless, having required some conscious framing and angles to work around the palms that line the median strip, and they catch some poetry in the vague, languid clouds and stretching shadows.

For a local, and for one interested in the history of the Gallery, it is the detail that is enmeshed in the grain of these fifty-year old 35mm strips that is gold.

The detail shows the Gallery only a couple of years before its first Director, Beth Sinclair, handed over to the collector 23 year-old Peter Perry. That could be her car parked out front, and the crack in the front wall, plastered over in the interim, is just now being fixed in current Director Naomi Cass’s full renovation of the heritage 1931 Deco facade. In the doorway is a hefty light-box announcing to passing tourists the display of the “Permanent Collection,” a regular stop-gap between temporary shows that were more rare then than they are now. Cactuses grace Michael O’Connell’s 1930s planters, perhaps a better choice than the cypresses in my 2017 picture above, as the forecourt faces north to receive the full blast of merciless Castlemaine summers. This is the Gallery in quiescence.