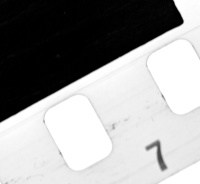 ‘Artefact’, used in either sense, is usefully applied to J. W. Lindt.

That it is a word coined late in the 19th-century, makes it all the more apt to a photographer who was alive 1845-1926. Constructed from the Latin ‘arte’ and ‘facere’ it’s a term that means both an object ‘made by human art’ or, in science, an effect generated in the process of investigation, or observed, but not actually extant.

Artefact is a term  (usually with US spelling ‘artifact’ and ‘verbicided’ as ‘artifcating’) that is familiar to digital photographers in describing the effects image compression, as in the case of ‘aliasing’ in excessively enlarged images or of the exaggerated contours of JPG images. Its use peaked in the literature around the turn of this century.

Aboriginal and Torres Strait Islander viewers are warned that this website contains photographs of deceased persons which may cause sadness or distress.

Lindt was among the earlier photographers to make a concerted series of pictures of Australia’s indigenous population. Hunt for the very earliest and you will find daguerreotypist Douglas T. Kilburn (1811 or 1813-1871).

But there is another contender; Thomas Browne (1816-1870) a Hobart publisher, lithographer and stationer who advertised in the Hobart Colonial Times  of 5 January 1849, that he made daguerreotype portraits.

Browne may have had the opportunity to photograph Walter, Mary Ann and David Bruney, during the 1847–1855 governorship of William Denison, most probably at either Government House cottage, New Norfolk, on 27 December 1847 or sometime between then and 31 January 1848 in Hobart Town.

The main subject, David Bruney (Myyungge), son of Woorrady (c. 1790-1842), leader of the Nuenone of Bruny Island in south-east Tasmania, died in October 1848, a year after he and 46 other Aboriginal people exiled on Flinders Island had been relocated to Oyster Cove Aboriginal Station, south of Hobart. He was about twenty-eight years of age in this image. Rarely reproduced in consideration of the near-annihilation of Tasmanian indigenous (I can access only this thumbnail), Brown’s heroic triple portrait is artistically and sympathetically posed. A copy, hideously hand-coloured in the 1930s exists in the Melbourne Museums collection.

G.A. Robinson sought out the daguerreotype from the artist of the forlorn Residence of the Aborigines, Flinders Island, John Skinner Prout on 16 March 1848 writing; “I should much like Mr Brown’s dgt. group of Walter, Mary Ann & David Brune”. It was later sold by Robinson’s widow to Bernard Davis in 1866 for £30 (a value of over $3,000 now), such was the desirability of images of what the Europeans regarded as a dying race.

Yet another is amateur John Hunter Kerr (1821-1874) whose A Corrorobby was made in the early 1850s on the Loddon River (not far from where I live in Victoria) and all the more remarkable for being made on location on a wet-plate. It is a carefully premeditated image; the group has consented to pose in body paint for the photograph of a ceremony normally conducted at night.

Artist Alexander Denistoun, 1814?-1872, was the compiler of the Lang album from which this salt print comes, but the date, transcribed in 1982, is incorrect. State Library picture librarian Madeleine Say sets out the arguments for the attribution of an actual date 1851-1855; the collodion process was only introduced in Australia in 1851, Kerr left his property ‘Fernyhurst’ in 1859 so the image cannot have been made later than that date, and the severe spherical aberration visible in the centre-focussed image is characteristic of the camera and lens that he used.

In each of these images we see the indigenous people depicted with their possessions, whether artefacts made by them or objects acquired from Europeans, as in the case of Kilburn’s subjects’ blankets.

This leads to the many current analyses of J. W. Lindt’s series of pictures of aborigines in the Clarence River district in which the artefact comes into question. Lindt was using the still slow and cumbersome wet plate collodion process that required coating of the glass immediately prior to exposure and processing immediately after.  He photographed some subjects outside in their environment but soon found it more practical to take them into his studio and pose them there amongst props gathered from the bush against painted studio backdrops.

Researchers Jones, Quartermaine, Poignant, Croft, Cooper, Harris and McBryde note that the subjects of the pictures in the album are not named on the uncaptioned pages and that their clans, the Gumbaynggirr and Bandjalung or languages are also not identified.

Lately, guided by their research, new information which considerably increases the previously known dimensions of Lindt’s activities in the 1870s, I’ve been busy creating a new Wikipedia article on Lindt and have had to revise initial impressions after reading Calling the shots: Indigenous photographies (2014) edited by Jane Lydon, whose previous books include Eye Contact: Photographing Indigenous Australians and The Flash of Recognition: Photography and the emergence of Indigenous rights. That in turn has alerted me to efforts by Annika Korsgaard and Grafton Regional Gallery to identify the subjects. Korsgaard has unearthed an article from the Grafton Argus of 16 November 1874, announcing;

By the ‘Agnes Irving’ on Saturday last, Mr. J. W. Lindt proceeded to Sydney for the purpose of arranging and publishing an album of ·photographic views of the blacks of the Clarence River and other Northern Districts.

The article goes on to detail the subjects of many of the images with a description of each of the twelve plates, identifying King Charley with his mother and wife; King Harry of Swan Creek; ‘Snowy’, also known as Jacky or Louis whose pictures Lindt also published elsewhere; Arthur; Orara William; Carrs Creek Jimmy; and Peter.

The Argus names the man above as…

…”Orara William” attired in hunting costume, with his head adorned with the dingo’s tail and the skin of a wallaby round his loins : he has also the various weapons used in the chase, and is in a standing position, giving a very good idea of the form, symmetry, and the power he possesses, being somewhat of a higher  order than the common run of the blackfellows we meet with in every day life.

The Orara is one of the tributaries of the Clarence, which at the time that Lindt was photographing, was being progressively logged; the destruction of large trees along the Nogrigar Creek is quite evident in the panorama Lindt made of the township of Solferino, near Lionsville NW of Grafton, NSW.

Thus Lindt’s portraits are located in history almost a century after first contact. The Aboriginal artefacts pictured are intended to evoke traditional life, the semblance of which is an artefact of his image-making. The implements, ornamentation and costume were disappearing just as the trees were, and European dress, weaponry and domestic objects were replacing them. Most striking is their mood of melancholy.

The whole collection has been taken by Mr. Lindt at his studio in this city, and the subjects of the pictures are all well-known characters. Great skill has been shown in the arrangement of the subjects which are true to life and portray in a truthful manner the habits and customs of the aboriginals of these districts…In all the photographs Australian scenery, foliage, and vegetation have been introduced, with great effect. We wish Mr. Lindt every success in his enterprise and trust that he will reap a good harvest. No such collection can be obtained in the colonies and when bound up would form a suitable present for friends in England and other parts.

That hints at Lindt’s motivation in overcoming “the timidity of the blacks and their not understanding that in order to get good pictures perfect quiet is necessary.” He was a true capitalist. Several biographers of Lindt echo Jack Cato’s lionising of him in his 1955 The Story of the Camera in Australia, repeating the myths that he ran away to sea and jumped ship in Brisbane. In fact he had satisfied his fernweh by signing on as a sailor aboard a Dutch ship, to arrive in Melbourne. Far from being a prodigal son, he was clearly well educated and had sufficient musical training to make a living as an itinerant piano tuner to fund his travels through country towns and pastoral holdings in Victoria and New South Wales to Grafton on the Clarence River where he settled for a while. It was there that he worked in the studio of the photographer Conrad Wagner (c.1818- 1910) before taking over the business and marrying its owner’s daughter. Clearly he more intent on chasing money and fame than women; his second wife, after his first died in childbirth, was his retoucher.

His albums were sold throughout his career, exhibited in trade exhibitions in Philadelphia, Amsterdam, Calcutta and Frankfurt, and were taken up by scientific collections in Australia and on the Continent, and, with other ethnographic imagery he made in New Guinea (1885) the New Hebrides (1890) and Fiji (1891), brought him the honour of a Fellowship of the Royal Geographical Society.

That imitators, or those working in the same manner, including Thomas Jeston Washbourne (1832 – 1905), failed to achieve anything approaching Lindt’s notoriety is entirely due to his ambitiousness and self-promotion.

When he won yet another gold medal at the 1885 Colonial and Indian Exhibition in Calcutta he was one of the few willing to cover the 10 guineas expense for having his medal struck; his lantern-slide lectures on his adventures were always crowded; he was an early-adopter and successful importer of the latest photographic technologies; and when he set up in Melbourne’s Collins Street (henceforth, into the 1970s, the home of the city’s most significant photographers) his clientele were the rich of the gold rush. During the land boom he was a speculator who in the subsequent 1890s depression survived with sufficient funds to set up a guest house in the Dandenongs where he lived out his semi-retirement and produced quite lyrical landscapes. That is not to denigrate his photography, which was excellent. Especially when armed with the dry-plate technology for his expeditions to New Guinea and later Fiji, he produced location photographs of indigenous subjects, but only after he had physically placed a plaque “LINDT. MELBOURNE. COPYRIGHT” in the lower corner of the field of view to mark his claim on the image.

His fame was an artefact of his exploitation.

One thought on “March 7: Artefact”