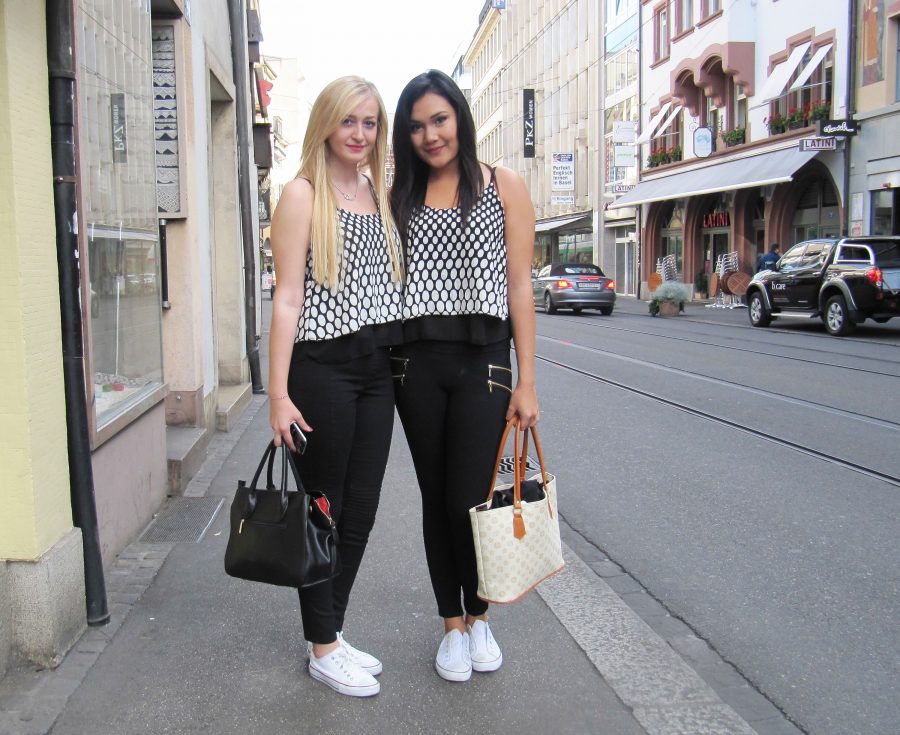 August 27: The Family of Man was a theme-driven exhibition and Edward Steichen and his co-curators organised the work of its two hundred and seventy three photographers, and five hundred and three photographs, into sections which approach the idea of family and humanity from multiple angles.

While there is much concentration on love and relationships, there are two dimensions that are hinted but not directly addressed. One is simple friendship, the other, sex. Mid-century mores dictated that the latter be kept invisible, despite the recent release of the Kinsey Reports (1948 and 1953), but friendship, such an important part of human relations, is not addressed specifically, but scattered amongst the themes of ‘Adult Play’, “Loneliness and Compassion’, some in ‘Music’ and ‘Food’, and of course in ‘Relationships’. It should be understood that the exhibition itself does not make these themes apparent however—they only appear in the MoMA Exhibition checklist for the show—while the imagery was presented in a continuous flow, without captions and without the quotations used indicating any particular grouping of photographs.

Two current exhibitions bring FoM’s hidden motifs to the fore. The Kestner Gesellschaft is presenting an exhibition by the Berlin-based artist Nevin Aladağ (*1972 in Van, Turkey, migrated to Germany 1974) entitled Best Friends in the Claussen-Halle, Goseriede 11 30159 Hanover Germany,  while there are two shows by Nobuyoshi Araki (*1940, Japan) who for 50 years has challenged viewers with his approach to human intimacy. They are The Incomplete Araki: Sex, Life, and Death in the Works of Nobuyoshi Araki at the Museum of Sex, 233 Fifth Avenue at 27th Street, New York, NY 10016, billed as his ‘first major retrospective in the United States’, and Araki: I, Photography at Anton Kern Gallery 16 East 55th Street New York, NY 10022. Both shows will close August 31.

Steichen’s show was accused by Roland Barthes in Mythologies (1957) of avoiding the issue of race relations in the United States, though he does not analyse any of the show’s photographs. An anonymous Associated Press picture of a lynching (left) was withdrawn from exhibition at some stage during the New York showing but was, as estimated by Shamoon Zamir in The Family of Man Revisited, in place until at least the eleventh week of the MoMA show and therefore seen by at least 178,000 visitors.

However, photographs remained in the show which demonstrate that Steichen had a progressive attitude toward race relations that, like the prevailing attitude to sex, which we readily accept for the 1950s, needs to be temporally contextualised when considering the show. That is what most critics fail to do.

Friendship, and the 1950s issue of race is powerfully evoked in a street photograph shown in The Family of Man by Henri Leighton, made at the very moment the Supreme Court’s (May 17, 1954) decision in Brown vs. Board of Education had abolished segregation in American schools. Of Leighton, frustratingly, I know little more than that he was born in 1917, and that several of his photographs of black Americans were represented in a Middlebury College Museum of Art exhibition Many Thousand Gone: Portraits of the African-American Experience May 22–August 9, 2015,  co-curated by Middlebury Associate Professor of History William Hart and the students in his Spring 2015 “African-American History” course.

The companions walk in step, the taller casually embracing the smaller with a protective, but not possessive, arm. Mouths agape, they could be conversing, perhaps about the card—a baseball card?— that the African-American boy delicately clasps in his left hand, as if having just shown it to his friend. They are observed by an old man sitting idly on a shop step clasping his walking-stick while another has his back turned to look at a cafe menu. Only the taller boy and the man with the cane have noticed the photographer, whom, by the scant indications available, we can assume was black. The man appears curious, the boy, a little wary, with hand to neck. Otherwise no sign appears that indicates that their friendship is out of the ordinary. 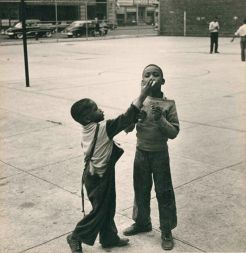 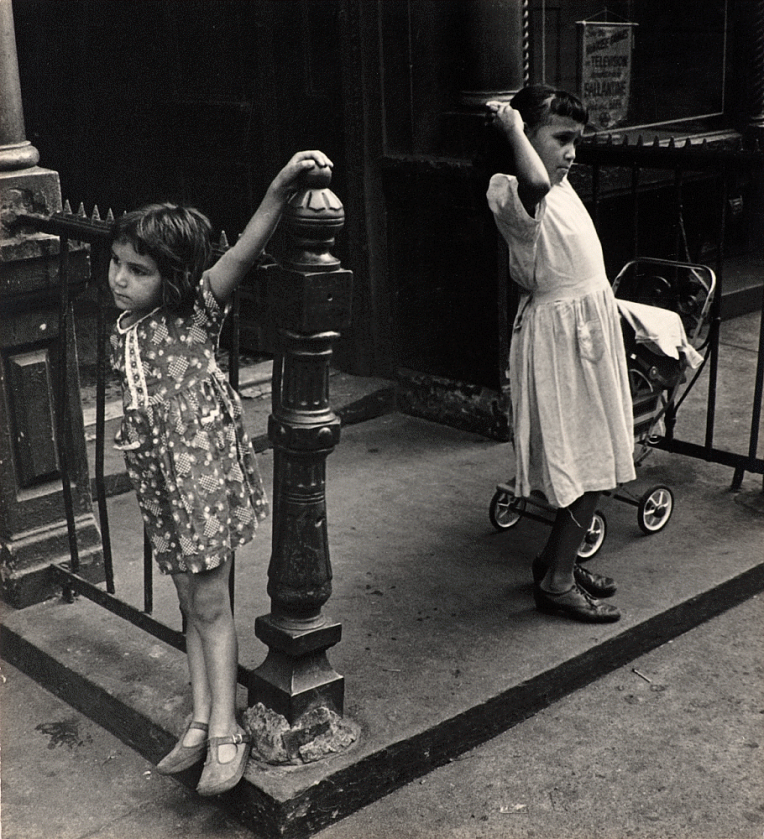 Other images by Leighton show a consistent interest in childhood and closeness. The genre was dominated  predominantly by white practitioners in the 1940s and 50s, and this street photographer and his sensitive and intimate observations  deserve to be better known.

Nevin Aladağ, who works across multiple media including sculpture, installation, performance, video, music and who uses photography for a variety of purposes, studied at the Akademie der Bildenden Künste (Acadamy of Visual Art) in Munich, Germany from 1993-2000 and now lives and works in Berlin. In Best Friends she provides us with photographs, made over 2012-2015, of more pairs of friends, also threesomes and fours..

Her Best Friends, Dortmund (above) from early in the series, sets up the format used for the later images; made out on the street, as was Leighton’s picture, the subjects here look knowingly at the camera, apparently aware of the photographer’s purpose—to document the similarity in their appearance. They shop at the same fashion stores for identical jeans and similar jackets and sneakers, carry the same bags, one blue, one black (on opposite shoulders, so they can walk easily close together), use cosmetics in the same way, and even their expressions are the same.

Such copy-cat behaviour may be de rigeur for teenage ‘besties’, but it is remarkable how Aladağ manages to find older pairs of friends who share appearance.

Aladağ photographs with fashion in mind, lowering her camera to waist level to give her subjects’ clothing prominence, but her frame also captures expressions, posture and body language that mirrors the like-mindedness of best friends. The persistence of her efforts to glean a few images over four years demonstrates that the phenomenon of identical fashion being shared by buddies is mercifully rare, but the other signs of close companionship are familiar to us enough that her discovery of extreme examples generates an especially uncanny, comic result that other photographers might not have the perseverance to produce.

Sex as taboo, or at least to see or speak of it, as it was in the 1950s, is revived in Araki’s provocative exhibitions, especially that at The Museum of Sex, where his image of an artfully hog-tied and suspended, but defiant, geisha, observed by the phallic presence of a toy triceratops, is presented at the end of a passageway of rope macramé. His 2007 Marvelous Tales of Black Ink (Bokuju Kitan) is a tamer version(below), but reads more ambiguously. It serves also as a portrait of Araki as artist, as voyeur, Mamiya slung around his neck equipped, appropriately or not, with a ring-flash, or as dirty old man. His bondage images however also throw light on its extremes…the lynching or the bond of friendship.

While Araki may aspire to making a photographic version of the Edo period woodcuts known as Shunga (“spring pictures”), photography, with its long historic baggage as the vehicle of crass pornography, does not so readily translate as a revival of the sexual frankness and the gender equality in sexual matters of that era, and importing such imagery into a Western, male dominated setting deflowers its cultural meaning, sensitivities and nuance.

The literature included at The Incomplete Araki: Sex, Life, and Death in the Works of Nobuyoshi Araki provides accounts from some of the women in his pictures. Again they are ambiguous, from Bjork who, in Travis Klose’s documentary film Arakimentari (2004), in excerpts screened throughout the show, compares working with him to tango dancing, to one of Araki’s former models accused him last year of inappropriate sexual conduct during a 1990 commercial shoot.

At Anton Kern Gallery, the model is obscured in, or absent from, much of the work shown. In Lovers Allure colourful graffiti covers the black and white prints of women in erotic poses, while Erotos (an elision of Thanatos, the ancient Greek personification of death and Eros the god of love) juxtaposes monochrome macro imagery of body parts with close-ups of flowers and fruit. In the florid, almost kitsch series Flower Cemetery dolls and plastic toys are inserted into still life flower arrangements, with both serving as reminders of genetalia and of the fleeting nature of beauty. Included also are the series of cloud pictures Northern Sky, taken after the death of Araki’s wife. The title of the show I, Photography may be found in the opening text of his heartbreaking Sentimental Journey, documenting their honeymoon, photographs from which are housed on the topmost storey of the Museum of Sex show.

Araki’s earliest photography, of his wife, leads us back to where we started, in The Family of Man, where ultimately sex connects once again with relationships and the bonds of friendship.