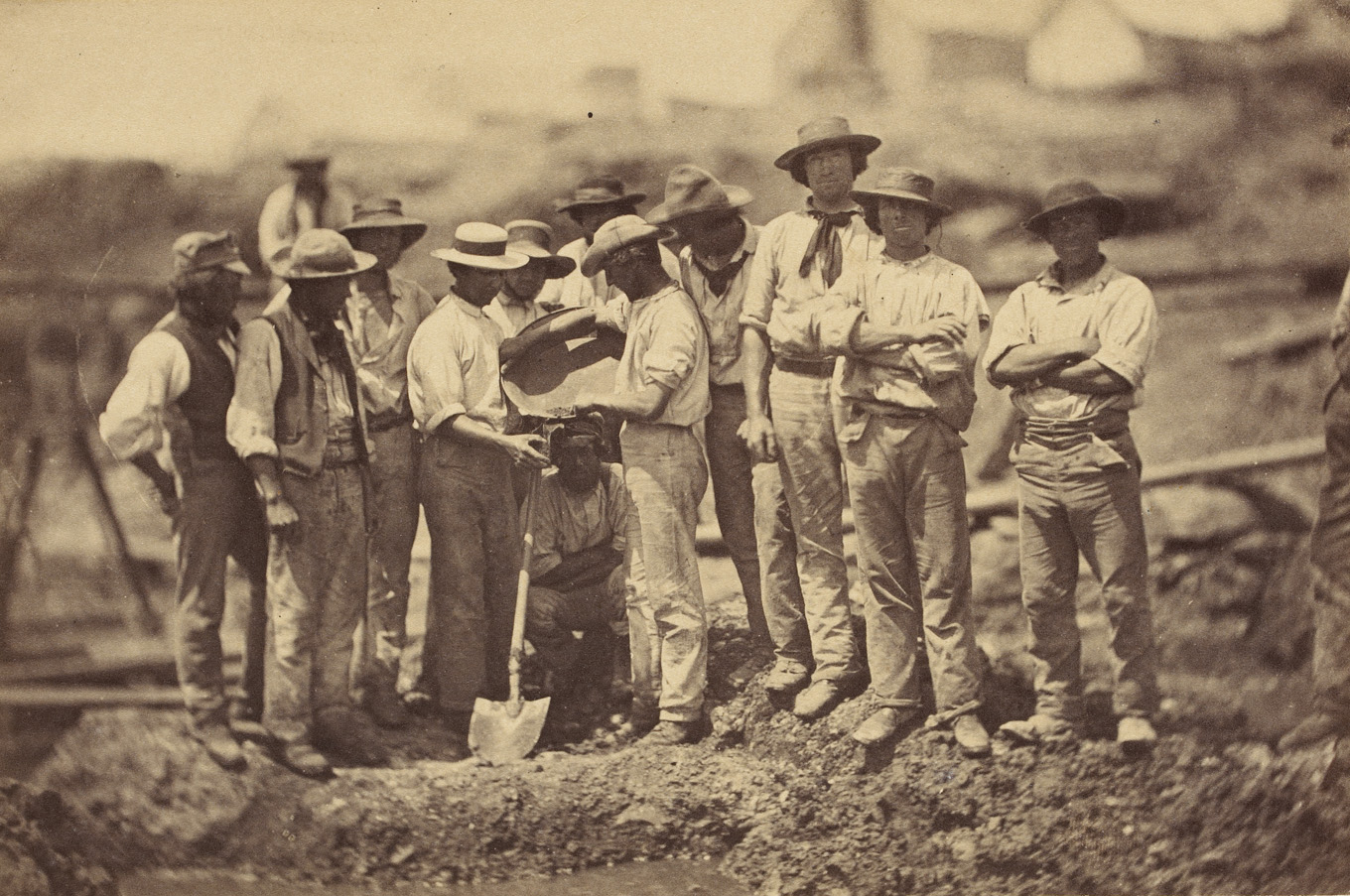 December 13: Look no further; the history of photography is right in your own backyard.

This post discovers intersections of history of photography with the region in which I live and the land on which I walk every day, in an act of ‘retrospecting’ rather than prospecting. But the adventure of exploring your own environment inside historical photographs is available to anyone (one has only to look at Running Past, a South East London local history blog by street runner ‘Paul  B.’ for a superb example of this kind of research).

The photographer born on this date in 1832 was Richard Daintree (1832—1878), a pioneer in the use of photography for geological field surveys, something we take for granted now in Google maps and in mineral surveys for mining.

Daintree worked here in Australia mainly in Queensland and Victoria and photographed much of the pristine environment as well as the degradation caused by mining. Born in England, he matriculated at Christ’s College, Cambridge, in 1851, but after a ‘pulmonary attack’ left for the warmer climate of Australia for his health, and joined the gold rush to Victoria in 1952.

The discovery of gold in my region of Castlemaine in Central Victoria meant that Daintree made many photographs of Forest Creek nearby, reputedly the richest alluvial goldfield in the world.  So young is this country that it is astonishing to realise that the wet-plate camera laboriously carried and operated by Daintree was present to make the first photographic record of the growth of this district, just twenty years after the first white explorer passed through. 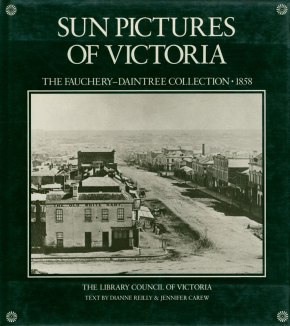 Though not successful as a prospector himself, he joined the Victorian Geological Survey, serving there until 1855 until the drudgery of field work drove him back to England to study assaying and metallurgy at the Royal School of Mines Laboratory under Dr John Percy (1817-1889) who was with Roger Fenton founder in 1853 and co-publisher of The Journal of the Photographic Society (and an expert on the wax-paper process in hot climates). Thus he became interested in photography, and on his return in 1858, he went into business in Collins Street, Melbourne, with the French writer and photographer Antoine Fauchery, and together they worked on the serial production of the Sun Pictures of Victoria, of ‘photographs of Victoria and eminent Victorians’, offered for sale in ten instalments.

Daintree’s partner Antoine Julien Fauchery (1827?-1861) was an adventurer, republican, artist, writer and photographer and reputedly the model for the character of the painter, Marcel in Henry Mürger’s Scènes de la vie de Bohème (on which the opera La Bohème is based). Born in Paris he began painting and wood-engraving before turning to literature as his calling. In 1848 he set out with the photographer ‘Nadar’ Gaspard-Félix Tournachon (1820—1910) to defend Poland with passports in the names of Nadarski and Faucheriski, but were turned back after running out of funds. In 1852 Fauchery sailed from Gravesend in the Emily for Melbourne, where he arrived on 22 October, setting up practice as a photographer.

It was during that period that they made this photograph of Forest Creek which was being turned over by thousands of eager miners searching for gold. Until the discovery of gold the only European to visit was explorer Major Mitchell who passed through the region in 1836, followed by the first squatters in 1837 who established vast sheep runs.

It was a worker in the service of Dr William Barker on his Mount Alexander run, Christopher Thomas Peters, a shepherd and hut-keeper, who first discovered gold, later writing about the find to the Melbourne Argus, which published is letter on 8 September 1851. By the end of the year there were about 25,000 on the field.

Chewton quickly developed as the first settlement in the area and on 28 January 1852, William Henry Wright took control of the Mount Alexander diggings and set up a government camp near the junction of Barker and Forest Creeks, which became the new township of Castlemaine. The Geelong Advertiser of 13 March 1852 carried the following notice, the first mention of my town:

The Lieutenant Governor has appointed John Fletcher, Esq., J.P., to be Police Magistrate at Castlemaine; but where Castlemaine is situated we cannot tell.

Daintree’s original albumen print from his wet-plate collodion on glass negative is remarkable for its detail, even in a considerable enlargement…

…in which can be seen the newly built Chewton Independent Chapel which still stands, but is currently hidden behind an overgrown garden and which has been transformed into a residence. This photograph, (below) taken about 110 years later, shows that it retained its original features, though its sandstone blocks have shifted in their mortar.

A view to the South-East shows a further swathe of diggings. The extent of the devastation is described in this contemporary account in the Argus by C.R.C. Pearce:

A stark unsightly district, stretching far and wide, looking I was going to say, as
if it were rooted all over by hogs – but rhinoceroses would be a more suitable
simile, if these animals were prone to that propensity. The whole region seemed,
in reality turned inside out, entrails uppermost, producing as repugnant an effect
as can well be imagined. Not a tree was left standing, nor a blade of vegetation
was anywhere to be seen over the vast surface.

Botanist Daniel Bunce (1813-1872), then a journalist and later the founder of the Geelong Botanical Gardens, wrote in his report to the Melbourne Argus, 8 October 1852:

It is surprising to see how a desire to amass ‘filthy lucre’ has superseded every other feeling for what is rational and interesting. On most of the hills, where elevation has rendered them useless for the purposes of digging, may be see a large number of very beautiful and interesting species of plants in full blossom. Among them several species of acacia or wattle, two or three species of eriostemon, and its closely allied family boronia; two of the pretty coral-like blossoming grevillea; two leucopogon, and several other of the natural family epacridaceous, plants of which the genera epacres forms the type, and one of which, the foveolata alba, is now in blossom. The disandria foliata, the scent of the blossoms of which proved so offensive to the olfactories of the ‘itinerant’ correspond of the Geelong Advertiser a few months back, all these plants, with many others, may be enumerated, but they are passed by the digging population without the slightest regard being paid to their beauty or odour. A further description here would be considered superfluous and unnecessary.

The hills in the distance, and much of this valley, are now covered in the hardy eucalypts which regenerated, coppicing miraculously from their stumps, with an understory of a few of the species of ground-covers and shrubs, described by Bunce, that survived.

In the top right of this image can be seen a double-storied building on which can be read the name Mount Alexander Hotel, with beer barrels lined up outside it on the verandah, and next to it, a hall. Only five years later the hotel was reduced to one storey in a fire which spread from a candle, as described in the Argus 5 Jan 1863

FIRE AT CHEWTON. (FROM THE CASTLEMAINE DAILY NEWS, JAN.2.)

This morning, at half-past one, two Germans, named John Hahlbohn and William Lose, were returning from Cremorne Gardens, and on arriving at the Mount Alexander Hotel they stopped, with the intention of obtaining some refreshment. They knocked several times, and received no answer, and seeing a light in the bar, they listened attentively, and heard the crackling of burning wood. They immediately broke open the door, and gave the alarm. The ingress of air through the opened door fanned the flames that must have been smouldering for some time, and in a few minutes the bar was one mass of flame. By this time other parties in the neighbourhood had been alarmed, and the back and side doors were forced in. The through draught thus established, of course, aided the progress of the flames, which quickly got so perfect a mastery that all hopes of saving the interior of the building, were relinquished. Ceiling and roof were quickly burnt through, and fell in a dense glowing mass to the ground floor, from which tongues of flame shot out in fierce strength, threatening to embrace within the ruin the adjoining buildings. The walls of the hotel were of stone, and though the interior was lled with a furnace-like heat, the ames were prevented from spreading.

The hotel, which originally cost £100 was rebuilt from the remaining sandstone walls, but is now a private residence with little remaining of the original structure (though traces of the hotel’s name can be made out under the eaves), for which the remains of the hall next door serve as a front fence:

In 1859, Daintree returned to Selwyn’s survey, now called the Victorian Geological Survey, as a field surveyor.

In 1863, Daintree made a general study of the physical structure of Queensland. Later, he briefly managed ‘Maryvale’ Station in a pastoral venture of which he soon tired, and he was subsequently appointed the first Geological Surveyor of North Queensland in 1868, taking hundreds of photographs as part of his exploratory work.

He took up the position of Agent-General for Queensland in London in 1872 where he worked enthusiastically to promote interest in that State. He was elected a Fellow of the Geological Society of London, and was honoured as Companion of the Order of St Michael and St George in 1876. He died on 20 June 1878.

In 1873 European George Dalrymple discovered an area of remnant rainforest estimated to be around 165 million years old, naming its river after Richard Daintree who played a significant role in discovering the prehistoric significance of the region.