February 1: Where is the line now, between appropriation and plagiarism?

Raoul Hausmann died on this day in 1971, best known for his satirical Dada photomontages and his provocations on and in art. Born into an artistic family and academically trained in painting, he joined the German Expressionist movement and began writing against the art establishment.

His 7 year extramarital affair with Hannah Hoch begun in 1915 and a 1917 meeting Richard Hülsenbeck introduced him to Dada, and with others he founded the Berlin Dada Club. By summer 1918 he and Hoch had started to make photomontages; collaged fragments of photos and text found in mass-media sources.

The Dada reuse of ‘mass-media sources’ is what I would like to consider here in relation to an exhibition of work by an Australian photographer Ben Ali Ong who tonight opens an exhibition This Flood of Love Drowned Me at Artereal Gallery, 747 Darling Street, Rozelle, Australia, which continues until 25 February 2017.

Between 1918 and 1920 Hausmann invented still other ‘anti-art’ including “optophonetic” and “poster” poems of random letters, collages of typography, and assemblages that were an extension of the photomontage into three-dimensions.

These sculptural works were also made with found materials such as a the hairdresser’s wig dummy, spectacles case, tin cup, tape measure, wooden ruler, cogs from a pocket watch, and pieces of a camera which make Mechanical Head: Spirit of Our Age (1919–20).

The mechanical man, or cyborg, is a theme in a majority of his works of this period: 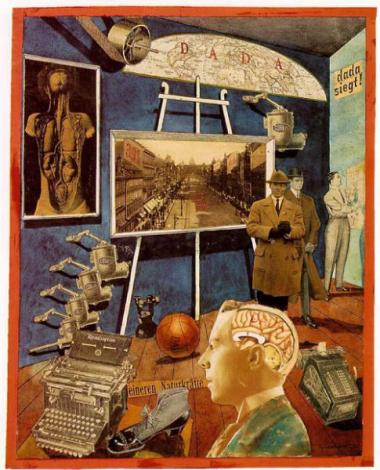 Raoul Hausmann (1920) Self-Portrait of the Dadsoph In 1923 Hausmann created his final photomontage, titled ABCD: his face appears at the centre of the image with the letters ABCD clenched in his teeth, and an announcement for one of his poetry performances is collaged right below his chin.

The sources of imagery for his photomontages are broad. We expect that Tatlin at Home might feature the Revolutionary Russian artist, but it is in fact the head of an unknown man Hausmann found ‘in an American magazine’ whose features he somehow associated with Tatlin.

Aside from the photographic self-portrait, the same as that in Synthetisches Cino der Malerei (above), ABCD contains many fragments of images from posters, medical journals, newspapers, figures, an inverted Czech banknote, bits of a map showing Harrar in Ethiopia in a tribute to poet Arthur Rimbaud (“This other adventurer of language” who retreated there in 1880), a crudely drawn world globe in two halves superimposed with letters X and U, a ticket to Merz incorporating the title of a poem “als Seelenmargarine” by Kurt Schwitters, cut up images of the Milky Way, the random strings of letters commissioned from a commercial print shop, and finally the letters VOCE (voice) echoes the shape of his roaring mouth.

The then thirty-year-old Sydney-based photographer Ben Ali Ong’s exhibition 1000 Years Beside Myself was due to open at Tim Olsen Gallery on 1 September 2012. Just four days earlier the Sydney Morning Herald published an article Gallery dumps artist over photo controversy that announced that the gallery was dropping  Ong “after revelations he used photos taken by others without acknowledgement to make his work,” and would no longer represent him. The article continued:

Matt Hansen, the US photographer who took the original eagle image used in Ong’s 1000 Years Beside Myself #1, said he thought the use was ”extremely unethical” and was inquiring with Getty about its legality.

A buyer of Ong’s sold-out raven image, Jacky Wilkes, said she believed it was an original photograph that he had taken. ”Had I known that the artwork was based on a stock image, I would never have purchased the artwork … I was misled by the artist.”

PetaPixel took up the story and in their online article and featured comparisons of the Hansen’s originals and Ong’s manipulated copies.

After the controversy and after spending time away Ong came back with Nyctophilia, his first exhibition since the Olsen show, which he opened at Artereal Gallery, Rozelle, on 1 July 2015. In interview he said having the new show: “proved to me is that [making art] happens whether I like it or not. It’s just a creative outlet. That was a nice realisation. It brought back a lot of honesty to how I approach the work and make art, because I think everyone gets caught up in the trap of overselling their work.” He answers the question of whether his work is appropriation or if it extends to plagiarism by saying that using appropriation and collage progressed in his work, that he’s not precious about others’ use of his own imagery, but regrets that in others’ perception the controversy “took over my whole practice.”

Before considering whether Ong’s 2011 use of Hansen’s images were ‘unethical’, ‘illegal’ or ‘misleading’ it is only fair to look at Ong’s current exhibition which features the following works and others. The exhibition is slated to be “to be his most brooding to date as it takes influence from film noir, the subconscious and visual poetry of Chinese calligraphy.” If brooding is what his audience desires, Ong provides it by the bucket. The images are again monochrome and those on the gallery website are abraded.

Not all are technically photographs, as two works derive entirely from blank negatives and are concerned with the abrasion of black in what the gallery describes as a ‘calligraphic’ process.

The result in this work (right) is similar to the effect in All a Dream that ends in nothing (above); both look as it is the print that has been placed on a rough surface and rubbed with an abrasive, a process of frottage in reverse, removing the surface instead of adding material to it.

The gallery introduces this method;  “he draws onto the negative in the way of an etcher working directly onto the plate; then scanning and printing the film but scaling it up to many, many times it original size.” However, cutting into the emulsion of a blank negative would result in black marks on a white background in a print. The digital stage in between must involve reversal to what would make these ‘negative’ images.

While the gallery hypes Ong’s “sense of the surreal, with the mystique of an underlying cryptic narrative” and “film noir and automatic writing” as significant influences in his work, I find this gesture of erasure quite attractively nihilistic, somewhat in sympathy with the impulse of Hausmann and other Dada artists in reaction to the destruction and trauma of the ‘War to end all wars’ and the persistent militaristic jingoism of governments, particularly in Hausmann’s Germany.

The images of nature in Ong’s Artereal Gallery show of 2015 are similarly dark. To some eyes they may present more as pessimistic, apolcalyptic, than merely ‘brooding’; Ong invites others’ reading of his work, providing little commentary on it himself. 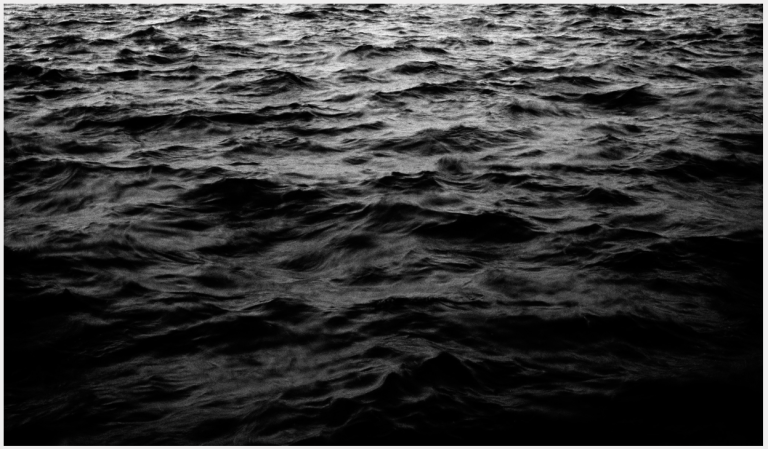 Why was he attracted to Hansen’s image of the Bald eagle?  The bird is a native of America, a national symbol, and eagles and other birds of prey have become the icon of militarist, nationalist governments, and of several right-wing movements. Why not choose an Australian wedge-tailed eagle? We also have our own raven Corvus coronoides, white eyed and with a longer beak, a more fearsome creature than the American species in Hansen’s Getty picture, it preys on cockatoos and rabbits as well as mere insects. A visit to Taronga Park Zoo in Sydney where Ong lives could have provided with him shots at close range of their raven ‘Chester’ (though I don’t think they keep an eagle). On the face of his comment that artists “[get] caught up in the trap of overselling their work” one might suppose that his use of American stock photography is down to convenience in a rush to get work done for the show. Might he have been seeking creatures with a particular mythology attached to them?

Felicity Fenner in her article It’s a Copy, Right? in Copyfight edited by Phillipa McGuinness, points out that Ong, despite initially denying it, purchased Hansen’s image in order to have a file large enough to make his big print. If he stumped up for a large file I cannot understand why Hansen felt he had a right to comment on any use of it. By signing up with Getty, Hansen has become a retailer of photographs. If someone buys one, they have a right to use it in any way they choose. That’s the reality of the kind of transactions Getty undertakes on their photographers’ behalf. It would be interesting to know the outcome of his “inquiring with Getty about its legality”.

Getty, in stipulating intellectual property rights and obligations of purchasers of their images confirm that “You do not need to include a photo credit for commercial use, but if you are using content for editorial purposes, you must include the following credit adjacent to the content or in production credits: “[Photographer Name]/[Collection Name]/Getty Images””, though there are other restrictions dictated depending whether the image has been bought outright of on a ‘restricted’ license.

Getty’s own appropriation of images from public collections opens up more serious ethical and legal issues. US photographer Carol Highsmith generously donated her collection of 18,000 images to the Library of Congress. To her horror she had Getty demanding $120 from her for using one of her own images, because Getty had ‘scraped’ it from the Library of Congress (who offer Highsmith’s images for no fee) for reselling on their site. Highsmith sued Getty. Australian academic Martyn Jolly found himself seething in his blog of October 21, 2016, over Dawn Airey, CEO of the Getty Stock Images; “she was confident that thanks to Getty’s lawyers, Highsmith ‘will go away’,” Jolly wrote  “in the same way oligarchs are confident that only stupid people pay taxes.”

As one regards Ong’s actions in light of current copyright debates it is useful to ask; what might have happened had he ripped an image of a Bald Eagle from an old National Geographic scanned it and presented that in black-and-white with a little added texture? Probably nothing. It is the digital, online availability, the newness of it, that is clouding the issue. The degree of alteration to the original is minimal and that also places him at risks of accusations of plagiarism, but look again at Petapixel’s comparisons and it is clear that Ong has removed a tuft of feathers under the eagle’s beak and both birds’ plumage is given higher contrast and detail has been added to the eagle’s head; they look glossier and more sinister for it. Rather than being mere illustrations of the creatures, Ong’s versions become artworks that carry considerable emotional weight.

Ong and Hausmann were the same age when they started to use photomontage and appropriation. Ong’s statements about his work are those of a young man still finding the words to express what he is doing. Hausmann avoided being involved in World War I but saw his artistic environment devastated by it, and was angry. A broader environment is at stake for Ong and his generation and his vehemence of expression about its distress is as legitimate, more so in fact.