January 11: You’ve seen the picture before; somewhere in a muddy laneway a sinewy figure from a surreal painting stands dressed only in briefs, grasping his right arm with his left as if it were a traffic sign, the palm wide.

His face, blank and inky black, is centred on the vanishing point of a steeply wide-angle, high contrast photograph. His twin crouches before a puddle; he twists to grasp his ankle while the fingers of his right hand seem about to scuttle away, imitating the gesture of man in a scanty dress and hat decorated with paper daisies who emerges from a doorway on the right. ‘What the hell is going on?’ ask the passers-by in the lane. It’s an irresistible shot, but we wonder too.

Opening tonight at Akio Nagasawa Gallery is William Klein’s  Dance Happening Tokyo 1961This Tokyo show is part of the travelling exhibition Kazuo Ohno By Eikoh Hosoe and William Klein of works by the two photographers, which was originally put together by Akio Nagasawa for last year’s Rencontres d’Arles international photography festival in France.

It was in 1961 that Klein was invited to Tokyo and sought out geishas, businessmen, children, Sumo wrestlers, and avant-garde artists including the butoh dancers. 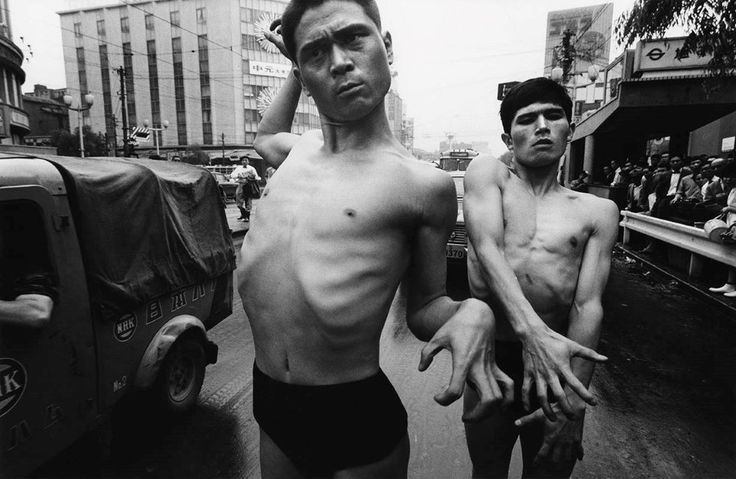 Here Tatsumi Hijikata and Yoshito Ohno perform a butoh dance along a main thoroughfare in Ginza, Tokyo. They were accompanied by co-creator of the dance, Kazuo Ohno , who died in 2010 at the age of 104.

Klein says of the shot; “When I was in Tokyo in 1961, they asked me if I wanted to photograph them. I said ‘why not’. But they wanted me to do it in the studio and but I hated having to do that, so I decided to take pictures in the street…it was the first “picture happening” in Tokyo “.

Butoh appeared first in Japan following World War II and specifically after student riots. Yoshito Ohno explains that Butoh dance was born out of the memories of Hijikata and Kazuo Ohno of the terrible tragedies of the Second World War, their hatred and their pain, and it is full of grotesquerie, darkness, and decay. Accordingly Klein treats them in the print below to his signature technique of using a scrim under his enlarger lens that makes his blacks ‘bleed’, rotting the whites. They reacted against the Western-influenced contemporary dance scene, and condemned attempts to continue Noh as superficial.

Tatsumi Hijikata first premiered Kinjiki (Forbidden Colours), based on a novel by Yukio Mishima and exploring the taboo of homosexuality, in 1959. Though Hijikata at first described his innovation in dance as Ankoku-Buyou (dance of darkness), he later changed it to buyo associated with Japanese classical dance, then to butoh which originally meant European ballroom dancing. Butoh is a poetic and surreal choreographic language enabling the dancer transform into animals and birds, into other states of being.

Klein, photographer, painter, filmmaker and visionary was born in America but adopted France later being discharged there from the US Army at the end of WW2. Successful in abstract painting, having been trained by Fernand Leger, he adopted photography after meeting Vogue‘s Alexander Liberman and started shooting fashion and hip travel stories on New York, Rome and Moscow for the magazine. These included his confrontational in-your-face approach to street photography; shots like Gun 1 (1954) come to mind, which was to become part of his Life is good and good for you in New York: Trance Witness Revels, that he published in Paris with Éditions du Seuil in 1958. In defiance of the smooth elegance of the 1950s he invented a high-contrast, jarring graphic style, an angry dynamic that exploits the distortion of super-wide and telephoto lenses and experimental printing.

The works shown in this exhibition are photographs taken during 1961, when Klein went to Tokyo and took more than 1000 pictures that were edited into his 1964 book Tokyo. Intrigued by a changing city in the initial stages of recovering from the war and striving towards modernity, he was accompanied at first by officials, but Klein managed to slip past the prohibitions to create images that uncover the taboo; a geisha in her private quarters; cosmetic surgery to correct slanted eyes; and a portrait of the imperial couple in an irreverent close-up.

Eventually, he shook off his escorts to photograph prostitutes applying their make-up, the packed subway, neon signs at night and then mingled with children in front of the imperial palace.

He also encountered painter-boxer Ushio Shinohara front of his shop after being contacted by the group of neo-dada artists to which Shinoharain belonged. His violent expressionism is a match for Klein’s own. 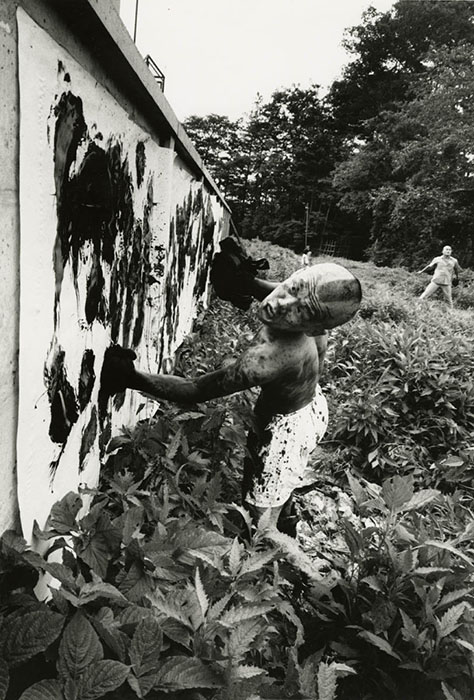 Klein explored Tokyo’s neighbourhoods with the local help of Eikoh Hosoe and other members of the VIVO collective which espoused a subjective, expressionist photography coinciding with Klein’s own and in fact, they had Klein’s New York book since its publication. At this time Hosoe was photographing for his Killed by Roses or Ordeal by Roses (Bara-kei, 1961–1962), dark, homoerotic imagery using the right-wing nationalist novelist Yukio Mishima as a model.

It is clear there is are complex interactions taking place in Klein’s project to photograph the three eccentric Butoh dancers and their experimentation with a new form of dance. It is a puzzle however to trace the direction of influences between the two photographers and with the dancers. Hosoe’s series Kamaitachi created with Tatsumi Hijikata as the model came later in 1969, but the impetus for it was set rolling by his Bara-kei, and that was being made simultaneously with Klein’s visit.

What impact must the encounter with the butoh dancers have had on both photographers? Klein’s confrontational street photography demanded reaction from his subjects, a kind of performance if you like, but here were people with whom he could not communicate verbally who were more extrovert and demonstrative in the street than he. How much did this encounter stimulate his interest in film (he had made only Broadway by Light in 1958 before visiting Tokyo) and particularly the satirical direction in his later films; Qui êtes-vous, Polly Maggoo? (1966) which sends up the fashion industry, and the caustically anti-American Mr Freedom (1969).

Hosoe’s ongoing friendship with Hijikata whom he’d met in 1959 and who also admired Mishima, resulted in the later collaboration, but would have exerted a momentum on the development of the fantastical and the grotesque in his work in the meantime, while there is no doubt that Klein encouraged his muscular and energetic style. In turn, as it was Hosoe who had also started in 1960 making black and white shorts in his Jazz Film Laboratory, especially Heso to genbaku (Navel and A-Bomb, featuring Hijikata), there was the conversation around film to be had between the two photographers.

Akio Nagasawa Gallery notes: “While some of the works shown in this exhibition were also included in the book Tokyo, most of them have been lying dormant in Klein’s studio without ever being published. The “actions” that resurface now, 56 years after the event, still have the same striking visual impact that they had on William Klein when he first encountered the three dancers in Tokyo”.

What they also contain is an example of truly international collaboration and cross-influence in photography that accounts for the formative work emerging in the early 1960s. I do remember as a teenager seeing Klein’s, and Hosoe’s, images in American photography magazines during this period and wondering, “What is going on?”