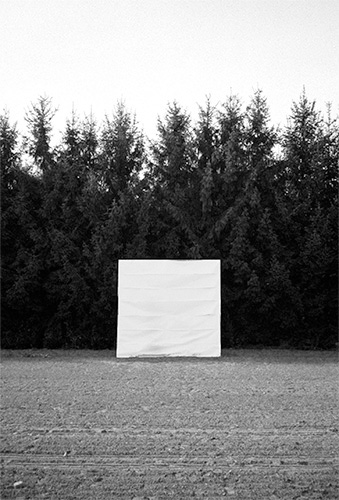 January 12: The plenitude of photography is something we take for granted and which we must negotiate as we make images. But what if the subject is something we could consider ’empty’?

Three galleries open or hold vernissages for three photographers this evening, and if you will allow me the indulgence let me take you around the ‘voids’ that they present, and others.

I guess we are in the doldrums of the gallery calendar in January and that is why so many shows are of historical rather than very recent work, but that does bring the assurance that we are looking at mature photographers with a history.

Danish photographer Joakim Eskildsen’s Nordic Signs were made in Norway, Scotland, Denmark, Sweden, on Iceland and the Faroe Islands from 1989-1994, so among these are images that are twenty to thirty years old and are Eskildsen’s first long-term project. These are being presented along with his most widely reviewed series, The Roma Journeys (book publ. 2007), being launched tonight and on show until 4 February 2017 at Purdy Hicks Gallery in London.

The elementary, emblematic titles of Nordic Signs belie the complexity of the task in achieving these images of Northern realms, of places which Eskildsen responds to as “something which is wild and yet inhabitable, but with a strong sense of weather, and wind, and destiny.”

The Sea, Mountain, Ice are titles that are indeed more ‘sign’ than description. They tell us nothing in the human coordinates of where, to which we give such important. The photographs themselves convey that elemental quality. We can sense the immensity of  Mountain III as its pied, icy surface stretches into the mist, but its flanks have something animal about them. As coaly, low-key, sombre and finely nuanced monochrome interpretations they abstract from the specific a presence of natural forms utterly devoid  of the human. But for one portrait of a fisherman who stands for his fellows in isolated communities across the North, and this image of fireworks over an unknown town taken from afar, the rest is ’empty’. 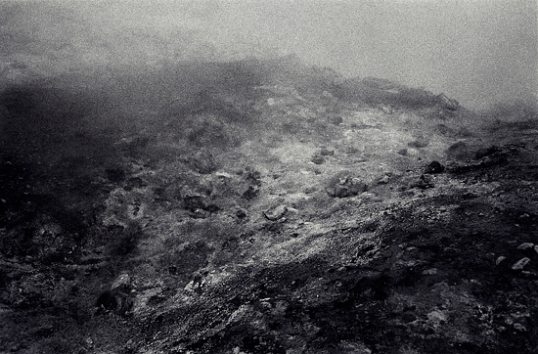 Anna Lehmann-Brauns shows WildSideWest at Gallery 94 in Baden until 25 February 2017, with a vernissage tonight January 12, 2017, from 18.30 hrs. Her work has been consistently about what would appear to be emptiness; empty rooms, deserted temporarily by their habitual users. This show is of an essay just completed in San Francisco.

WildSideWest refers to The Wild Side West, a lesbian bar (named after Barbara Stanwyck’s Walk on the Wild Side) in Bernal Heights in San Francisco, a city which Lehmann-Brauns, born in Germany in 1968, had never visited before. The bar had opened six years before she was born; the original owner and founders, lesbian couple Pat Ramseyer and Nancy White are now dead. She arrived just after the Orlando massacre and found the Castro quarter, legendary in the LGBT movement, in mourning.

Even in dimly lit situations she works on medium-format film with smaller apertures to capture every detail, though it often requires several minutes of exposure. In the image below this has the effect of normalising the light of this club interior, though the glaring light of day seeps through and around the edges of the pink curtains. What might look glamorous in the UV light at night now reveals little tawdry details like the rolled cable that used to attach to a speaker or a screen above the truncated plaster pillar, and the electric aqua satin tablecloth hanging like a discarded slip; these are elements which centre the shot in a sea of red, blue and pink.

On a sunny afternoon Lehmann-Brauns visits Hole in the Wall, a traditional club for gay bikies. In the middle of the floor she finds a Harley motorcycle around which stand men ‘as big as bears with long beards and leathers, many of retirement age’. Her photograph, one she regards as one of the most ‘poetic’ of the series, picks up the reflection of the neon lights in the studded brown vinyl of the seating and the chains hanging from the ceiling. The mirrored walls are adorned with motorbike logos and posters of wrestlers and a samurai illuminated by glow of a pinball machine. From the ceiling the illuminated numerals swinging on a disc are blurred during her long exposure.

Taken in daytime Lehman-Brauns’ deserted interiors record a transformation which leaves us curious about the inhabitants and their activities. There is a stage-like quality to them and in fact one of her recent series, Artificial, was of film sets. But in each, all is quiet, empty but for fantasy and memory.

His current series on show derives from a three-year documentation of the modernist building of Faculty of Applied Sciences in Potsdam (Haus D). On the surface this is standard architectural photography; all white surfaces, soaring angles and clean lines. Ironically, he says, the building seems not to have been accepted by students and teachers. Like many tertiary institutions perhaps part of the problem is that attendances are down as all lectures and course materials are put online. Pusch however attributes its lack of use to its sterile uninviting architecture. His images include the human figure, but it is furtive, hidden. 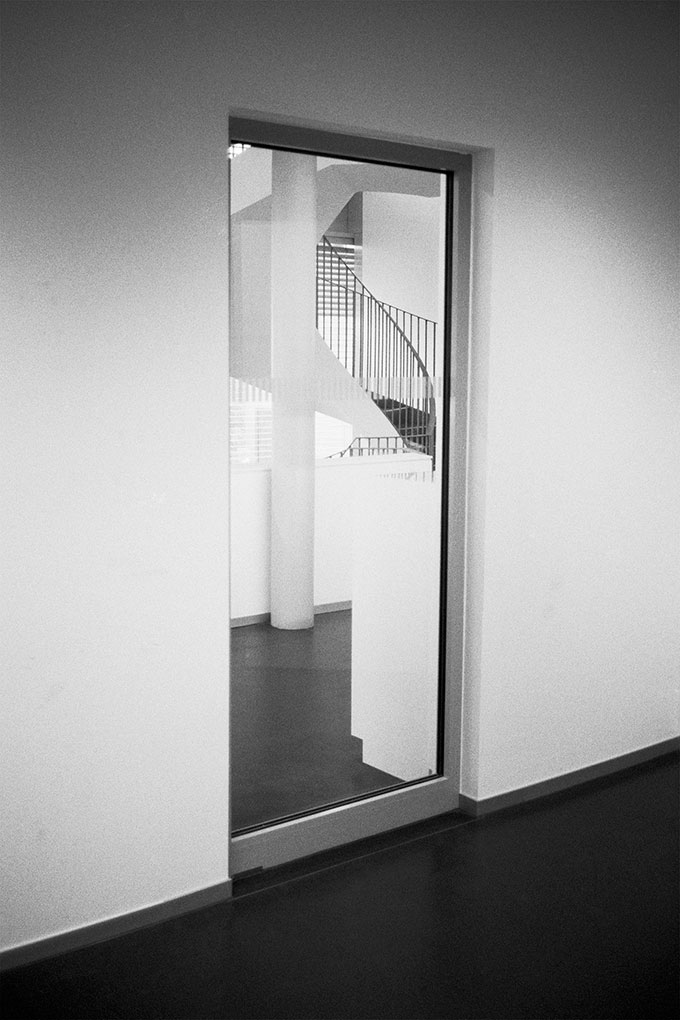 A diverse young photographer, one of his interests is in the social dimension from which he has produced a number of essays including one Furtig (‘Finished’) in which he stationed himself over several weeks in front of the famous Berghain club in Berlin with his medium-format camera to photograph the people who were going home after 8, 12 or 16 hours of dancing in the techno temple.

Another series presents us with a series of white rectangles and squares stated in the centre of the frame in images of the landscape. A blind spot, an irritation, rather than a formal exercise, these also exploit a psychological reaction.

It is a social reading Pusch clearly intends in Haus D, the empty building. 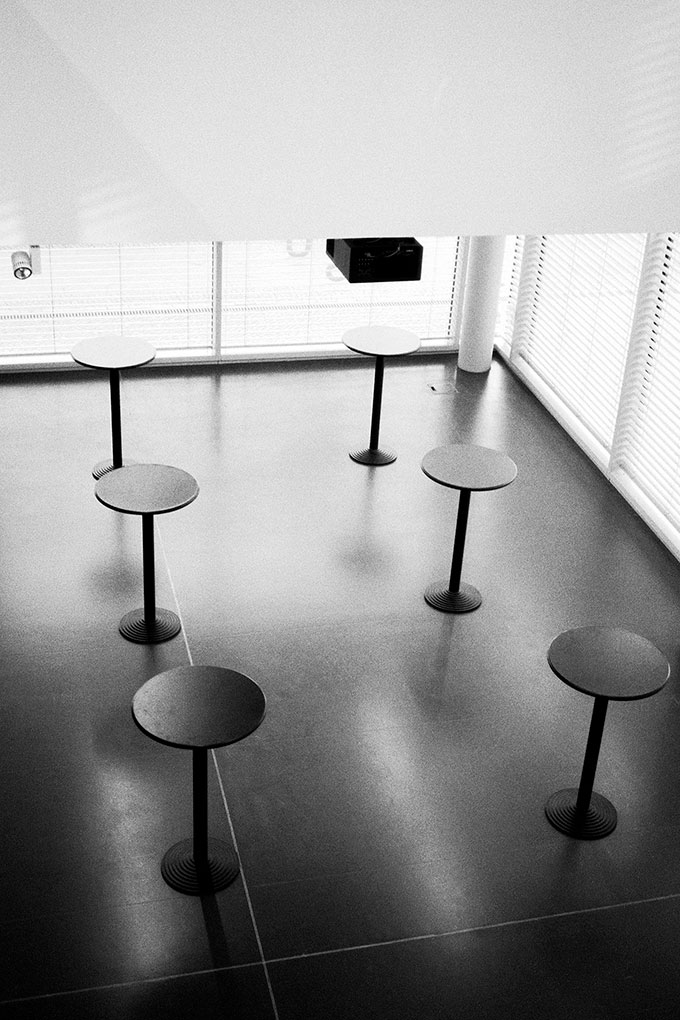 It would be remiss not to mention John Dillwyn Llewelyn since he was born on this date in 1810 in Swansea and was reputedly the first photographer in Wales. He and his wife Emma Thomasina Talbot, through whom he was related to Henry Fox Talbot, both made photographs:

Charlotte Traherne, another of the cousins at Penrice, replied to a letter from her cousin Henry on 28th February 1839:

My dear Henry,
…John Llewelyn has been making some paper according to your process and they have all been trying little scraps of hair and ribbon and succeeded very well this morning before breakfast but the day is clouding over. Mr Calvert Jones is quite wild about it . . . John Llewelyn’s (paper) turns out browner than your piece, not so dark. We put a piece in the camera obscura but got only a faint outline or rather shadowing of the trees, but the sun was not so strong or steady …

By 1842 we know that John was practising the calotype process and was also making daguerreotypes and by 1852 was making wet-plate pictures, writing to Henry Talbot on 19th May 1852:

I have been practising sun painting for some years and, as a matter of chemical amusement, have all the different processes on paper, slIver and glass-and it is rather remarkable that the method I now follow when I wish for good views is identically the same with your old original recipes. After all the many proposed modifications I believe that they continue to be the best

He and his wife Emma and sister Mary photographed daily life—or rather, those family events such as a going fishing, an elaborate tepee set up for the children, or a day at the seaside; animated family snapshots, made almost daily, which form a family album begun by Bessie Dillwyn in 1853, now in the collection of the Victoria and Albert Museum.

Llewelyn was thus motivated to be able to photograph more spontaneously, so made efforts which advanced the speed of photographic capture; a shutter to capture waves at 1/25 of a second; and a way to treat collodion plates so that they could keep for several days. Previously, to make such photographs as the ship Juno blowing off steam, Llewelyn had to hire a room in Tenby harbor, not only to give him a vantage point for his camera but as a temporary darkroom for processing immediately before and after exposure.

The Illustrated London News for July 1856 produced the following comment:

We have heard of a new method of preserving collodion plates for a week or a fortnight, discovered by Mr Llewelyn of Penllergare-a gentleman to whom all photographers owe a world of thanks. The plates may be prepared at home and a boxful taken out, and-think of this ye tourists, as you travel along and a fine prospect meets your eye-you have nothing to do but to stop your carriage, get out your camera, and in a few minutes you may secure a picture, drawn by Nature herself, that would have taken you hours to sketch.

The Photographic Exchange Club of London’s Photographic Album of 1857 contained a photograph of a heron Piscator No. 2  accompanied by an epigram by Thomas Hood, English poet, author and humourist, that read, “And in the weedy moat, the heron fond of solitude alighted. The moping heron motionless and stiff, that on a stone as silently and stilly stood, an apparent sentinel, as if to guard the waterlily.”

‘Motionless and still’ indeed. What we take to be a wildlife photograph is not, because such a thing would have been impossible even with Llewelyn’s faster shutter and dry calotype paper, the speed necessary to catch animal life was not achievable.

The picture is in fact empty. The heron is stuffed.

Llewelyn used taxidermies as subjects for a number of pictures, including people on horseback, and this even earlier, and implausibly well-composed, picture of a stag ‘parking’, standing alert to the approach of the photographer; a stance that would last only a second before it would crash off into the undergrowth – such was Llewelyn’s eagerness to achieve ‘instant’ pictures before anyone else!

I had the pleasure today of meeting with Doug Spowart and Vicky Cooper in a cafe overlooking Castlemaine. He had just written this post on his blog on the emptying of our university and other tertiary libraries and the dumping of photobooks in particular.

He generously presented me with a book by Martin Smith ‘in response to…’ for which Smith has laboriously excised letters from his autobiographical images thus partially emptying them of matter. In exhibitions he lets the cutout alphabetical detritus fall to the floor beneath. By describing our photographs, by telling their stories, are we emptying them of meaning, of substance? 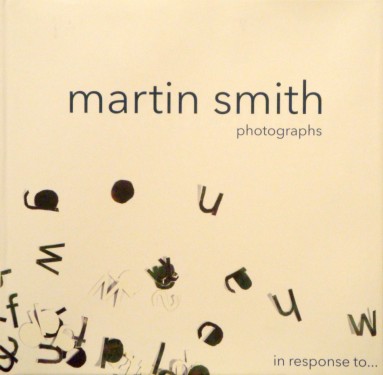 Emptiness in photography is runs counter to its panoptic nature; the box of the image begs for filling, howls with a horror vacui, but if we find the subject empty, with what do we fill our frame?