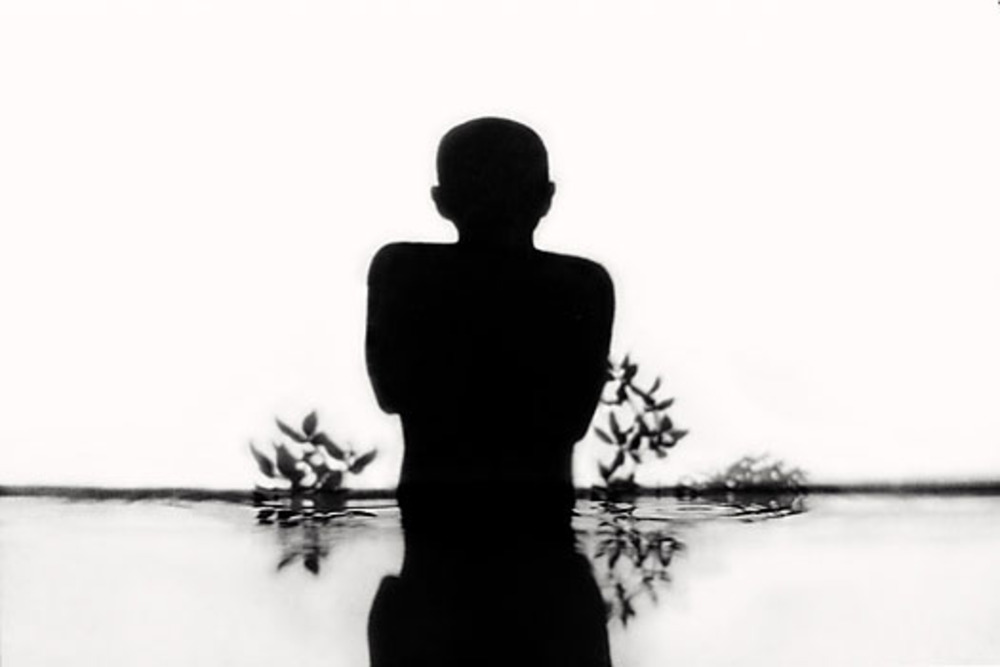 January 8: It’s hot today, 36ºC in the shade. On days like these, we set out to swim in ‘The Rez’ with children and their friends with boogie-board and goggles. Our other swimming spots are a behind a spillway on the Loddon River, or in the dams nearby.

I’m thinking of these swims, the honey-dark of the water, blood-warm on top, icy at the feet, floating in bliss, submerged ears momentarily relieved from the drumming drone of cicadas.

The prompt for these reveries is the work of Huang Xiaoliang whose exhibition East Window at M97 Gallery, Shanghai, opened last night. Now in his thirties and hailing from Hunan Jishou, he graduated from Qingdao University with a Digital Media Arts degree in 2009 and lives and works in Beijing, Hunan. He has exhibited widely in solo shows since 2010.

There is scant information on Huang Xiaoliang’s East Window, but the invitations and work from a group show give some idea of its nature: 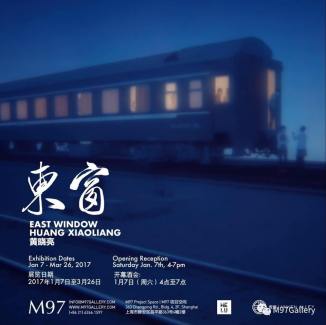 My thoughts of swimming were prompted by his earlier work, A Gentle Summer also exhibited at M97. The works have a strange quality, like something glimpsed through a keyhole, almost real but somehow miniaturised. The man stands waist-deep in a natural stream or lake, the surface of which we can see ripple and shimmer as a cool breeze passes over him. We can imagine his expression from the way he hugs himself as he shivers before sliding back beneath the surface into the embrace of the water. Is he looking at us? He is, or he is not, simultaneously, since this is a silhouette.

Contemplating Huang’s other lush images in this series of outdoor activity close to the water conjures the saturation of the senses which summer brings.

His is a magical realism. The figures are soft and occupy a strangely shallow space at the edge of the water. The water which reflects the figures at its edge  seems more substantial than they.

These pictures easily fit the cliches of Chinese ink painting and traditional scrolls. With their  layered, formulaic construction and flattened perspective, these are fleeting, dreamlike visions as redolent with nostalgia for the art of the past as much as for the childhood of summers long past.

It is too easy however, viewing these from a Western culture, to regard them as an imitation of Chinese guóhuà, traditional national painting of the dynasties, particularly of shui-mo, the calligraphic pen-and-ink works, and indeed Huang makes specific reference to this in a previous work.

It shows Chinese youths at a lookout stopping to admire the precipitous mountains and mists that are the subject matter of so much guóhuà. Their sneakers and t-shirts and short skirts, and their bodily attitudes, betray an ambiguity about, perhaps a respectful disconnection from, what they witness. The young man taps his cigarette on its pack and one of the girls leans towards him in conversation, and a dragonfly alights on a post between them; a creature known as a friend to the human, a mediator between them and the landscape, though it is also traditionally regarded as an insect predator. Perhaps the landscape is a painting and not real; there is a clash of cultures here.

Chen Fuli Tchan Fou-li was born in 1916 in Guangdong Province taking up photography in 1944 in Vietnam and settling in Hong Kong in 1955, working as a press photographer and producing a number of books of his work, publishing the Photo Pictorial monthly magazine (originally called Art of Photography) in 1960.

Born in Guangzhou, in 1929, and orphaned at the age of seven, Dong Hong-Oai was settled into the Chinese community, also in Vietnam, in Saigon. Apprenticed as a photographer, in 1979 he fled the border war and at the age of 50, speaking no English he arrived in San Francisco. Travelling back to China periodically to take photos, he studied under Long Chin-San, in Taiwan, a master of traditional Chinese landscape painting, and by the 1990s his new works modeled on the ancient style got the attention of galleries in the U.S., Europe and in Asia.

Both of these artists were practicing outside mainland China where, because of the Cultural Revolution there is really no continuity in the practice of photography, no major institutions or galleries, before the last few decades. The avant-garde did not emerge until the 1960s and it is the generations since that have participated in what is now a thriving photography scene. Not until the mid-1980s does photography begin to have a presence in exhibitions as art. With more artistic freedom in China and the exploration by Chinese photographers of Western approaches to the use of the medium, we see the beginnings of more conceptual and experimental work and photography being used in response to the modernization of China and a market economy.

As China reaches its post-boom years, Steven Harris of M97 Gallery suggests a more contemplative period is setting in, a time when artists and thinkers see through the veil of glittery consumerism and all it promised, and now are looking for ways to return to what’s left of their roots.

There is no doubting that the nostalgia in Huang’s A Gentle Summer series is heartfelt, but it is sweet, almost saccharine. It might be easy to condemn them as schmaltz of the greeting card variety if it were not for the ironic stance of his Looking at the Scenery. But the images rescue themselves from sinking into Kubla Khan’s honeydew and the milk of paradise.

“A truck brimming with fish jumping before a wide-eyed child, the wonder of observing the flight of a dragonfly, the sense of anticipation of a swimmer about to dive, a lovers’ passionate kiss among water lilies” is how the gallery describes them. All are created with projected shadows and layered images. 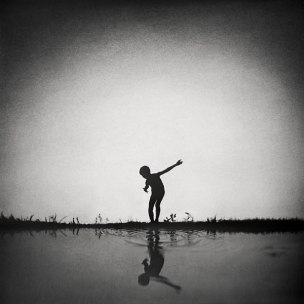 These, the most fundamental elements of photography, light and shadow are of what Huang’s images are made. We react to them on first sight as the products of digital imaging, and rather naîve at that. But they are not. With a nod to the ancient traditional arts of Chinese shadow puppetry and paper cutting, Huang’s representations are a masterful display of pre-production skills.

He creates his photographic works by constructing a ‘set’ of shadows, silhouettes and cut outs. He often creates the backdrops for the works using paper and inks and projects light or images onto them. In front of this real objects, or cut-outs are silhouetted against the shadowed patterns of trees or urban settings, and in this case the water is real, a tray of it placed into the set. Black and white film is used, and with heavy vignetting conveys a sense of time past. The photographs are not manipulated and constructed in Photoshop but are created ‘in camera’.

Memory and childhood imagination stand in the foreground of a China of the past, and the artist’s attitude to disappearing social and cultural practices is ambiguous, like that of the young people in Looking at the scenery #2, and is left open to the interpretation of his  audience. The artist includes poetic texts that create further intrigue.

Huang says of his inspiration;

I played shadow games in the park during my university days, which gave me some ideas, but the real root of the idea comes from an attempt to display the most basic elements of photography in the simplest way[…]I’ve used a lot of ink and traditional Chinese handmade paper as the base pattern for my images before piling shadows on them. Although it might look like it, the final works you see aren’t compositions of several photos. The images are composed and created in pre-production, not post-production, and the final works are all formed at the click of the shutter.

The steps from Shen Zhou to Yang Yongliang (b.1980) and to Huang Xioaliang represent a changing Chinese culture and a significant shift toward photography and digital imaging, though respect for the art of Chinese traditions that span thousands of years endures.

If I don’t understand how to cherish,

Then I can abandon it.

It is easy to treasure.