January 6: Images that allow us to pry into the lives of the rich and famous; that’s the currency of our celebrity-obsessed world.

Born on this date in 1858, Dornac (an anagram of his true surname, Paul François Arnold Cardon, who also called himself Paul Marsan, or Pol Marsan) specialised in portraying personalities photographed at home or in their workplace.

He was the author of a series of photographic portraits from 1887 to 1917 entitled Nos contemporains chez eux (‘Our contemporaries at home’) which appears in Le Monde, either as engravings after his photographs or directly reproduced, regularly between 1890 and 1900. He was a portraitist of stars; Sarah Bernhardt, Auguste Renoir, Gabriel Fauré, Fournier, Henri Bergson, Stéphane Mallarmé, Auguste Rodin, Charles Gounod, Pierre Loti, Jules Massenet, the physicist Gabriel Lippmann, astronomer Pierre Janssen and Louis Pasteur.

By 1887, aged 29, Dornac had tired of making portraits in the traditional manner in his photography studio, as Nadar had done before him for several of the same subjects. He decided instead to visit them, chez eux, with his camera. He leaves us with remarkable impressions of over two hundred of the celebrities of France in the Paris of the late nineteenth and early twentieth centuries; writers, sculptors, philosophers, poets, painters, actors, engineers, clergymen and statesmen. The venture was an immense success, a novelty that enchanted all of Paris; everyone wanted a portrait by Dornac, and ordered multiple prints.

It was of course the opportunity to vicariously experience the homes of these famous people that gave the portrait series such a long run in Le Monde, and it is a significant aspect of them that piques our curiosity still. The shots are framed to show the subject in their own surroundings, and most of those are crammed with fascinating detail just as the fussy, overdecorated  fin de siècle rooms themselves are. They prefigure Arnold Newman’s ‘environmental portraits’. 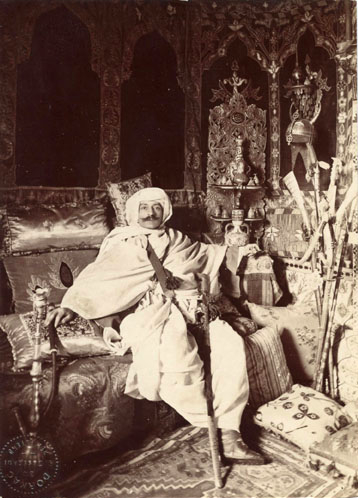 Pierre Loti, who loved all things Middle Eastern and Turkish, poses in his exotic regalia, complete with sword, in his 1001 Nights themed lounge room. In a note to Dornac arranging to have the portrait taken he Loti writes; “Dear Sir, will you come tonight at 5:00 at the Hotel Lafontaine, 16 Rue de Grenelle –  ask for ‘Daniel’ it’s the name that I took to be left in a little peace. Yours. P. Loti “. Privacy was as precious to celebrities then as it is now!

Not all of them are necessarily psychologically penetrating, but probably the most revealing, and poignant, is the portrait of Decadent poète maudit Paul Verlaine in Café François Premier near the Panthéon and the Sorbonne, with his glass of absinthe. Portrayed in the final years of his life when he was drinking heavily and dependent on drugs, it is in this place, and not at nearby 9 rue des Fossés-Saint-Jacques where he then lived, that he chooses to be photographed by Dornac.

He sits alone, hat and cane occupying the other place at the table, averting the gaze from the photographer in a funk. His poetry was shortly to be rediscovered and his bizarre and somewhat antisocial behaviour came to be regarded as a bohemian, a curiosity and a sign of his status, but here he presents himself as an isolate. In 1894, two years after this photograph was taken, he was crowned “prince of poets” and given a pension. He died two years later, on January 8, 1896.

Dornac had taken his pictures between 1887 and 1918, but while most of his sitters still well known, he had faded from memory, though ‘Paul Marsan’ (one of Dornac’s pseudonyms) had been known for a decade to have worked as a journalist covering Parisian society. A Mr. C., anxious to remain anonymous contacted a Paris auctioneer of the PIASA group, Delphine de Courtry. For twenty years he had owned 179 photographs signed Dornac and wanted to part with them. He allowed PIASA’s photography consultant Yves Di Maria to glimpse a document at the bottom of which was a signature “P. Cardon dit Dornac”, and with that he was able to track him down in Père-Lachaise cemetery and amongst two hall archives and then contacted Marie Mallard Eymeri, an interior designer fascinated by the interiors revealed in Dornac’s photographs, and who is writing a book on them.

A second sale of photographs from this collection was held at Piasa on June 2011, after the success of a first on 16 May 2008. They put up for sale two hundred and nine of Dornac’s portraits, and they fetched good prices €176,620 in total, including € 40,700 for the portrait of Mallarmé and € 37,000 for that of Paul Verlaine. One of the three shots of the poet maudit was then acquired in the first sale by the artist Jean-Michel Othoniel; “That’s when I discovered how Verlaine used the photographer and this medium to stage a little fake realism”.

Dornac had taken other photos on that day at the Café Francois Premier, 69 Boulevard Saint-Michel, in front of the Jardin du Luxembourg which may account for its decor (it no longer exists, replaced by a shoe shop).

Though the order in which they were taken is not known, they may even be read as a sequence in which the poet becomes bored with the process, or is getting drunk while the photographer labours away, and retreats into the corner. In the first photograph above there is a glass of red wine on the marble table, almost empty.

In his Life of Mallarmé, Henry Mondor writes: “At a banquet of artists, in 1893, amidst general gaiety, someone laughed at seeing Verlaine drunk. Mallarmé turned away to hide a tear.”

The photograph was perhaps intended by Paul Verlaine to echo this earlier group portrait of the poets of the Decadence by Henri Fantin-Latour, in which he appears at left, aloof but seated next to the enfant terrible Arthur Rimbaud with whom he was having an affair, which was shortly to end badly. Fantin-Latour’s painting was part of an intended project, similar to Dornac’s, to gather portraits of the great figures of the period.

Jean Aicard was one of the other poets in Fantin-Latour’s painting was approached by Dornac. Jean Aicard began his career in 1867 amongst the group Jeunes Croyances (Young Believers), his best known works being Poèmes de Provence (1874) and La Chanson de l’enfant (1876). 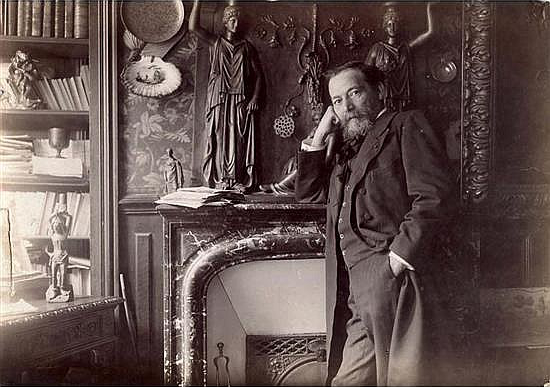 The photographer didn’t hesitate to ask his subjects for a dedication to accompany their image, leaving space under the photograph on the mounted proof for them to do so and he also kept their correspondence. Aicard writes:

7 nov. 40 rue du Luxembourg. Cher Monsieur, on m’a demandé hier pour le Gaulois illustré un portrait. Je me suis hâté d’envoyer une des belles photographies que vous m’avez remises ces jours-ci. J’attends toujours celle que je dois signer pour votre collection. Je tiens un des mes volumes à votre disposition. Recevez je vous prie mes cordialités. Jean Aicard [Dear Sir, they asked me yesterday for a portrait of myself for Le Gaulois. I hastened to send them one of the beautiful photographs which you took just recently. I wait to give you the one I have signed for your collection. I hold one of my books for you to pick up at your convenience. Please accept my cordial thanks. Jean Aicard.] 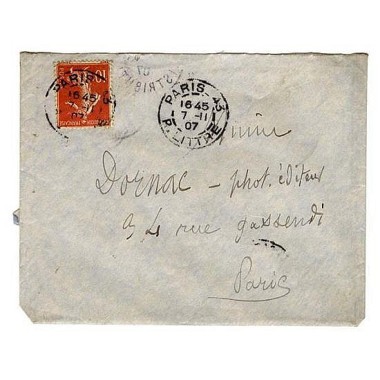 Clearly then, this huge photographic undertaking brought satisfactory, even happy, results, especially since there was this retirement for the subjects to endorse Dornac’s project, which was later published.