In the first quarter of the twentieth century,  it was photography that could shape national ambitions.

Deciding to make the most of the eight-day waiting period in between their two mandatory shots of the cholera vaccine, they decided to climb Mount Olympus; mythologically, nationally and geographically significant as the throne of Zeus.

Twenty-five attempts by foreigners to conquer the mythical mountain had all had ended in failure, stymied by the Ottoman occupation of Greece, military clashes at the Greco-Turkish border which crossed Mount Olympus  from 1881-1912, and bandits.

These days climbing Mount Olympus‘ Stefani Peak (2,909m) is not that difficult, with 10,000 people climbing it each year, and around a million so far, each taking about two days to do it, but Baud-Bovy and Boissonnas had to find their own way.

Arriving at the village of Litochoro, having traveled by boat from Thessaloniki they hired Christos Kakkalos (1882-1976), a lumberjack and goat hunter with in-depth knowledge of Olympus, to guide them. A hunter called Nikos Bistikos, and a shepherd Athanasios Katradzis, with a small child, accompanied them part of the way to a woodcutters hut.

After several attempts, including one false triumph when they had scaled what they thought was the summit only to see a higher one emerge from the mist, they succeeded.

Conquering Olympus is symbolic of Boissonnas’ subsequent efforts in favourably publicising the country’s expansionist ambitions during the early 20th century. As Daniel Baud-Bovy wrote of their ambitions in collaborating on many publications;

“For many years, Greece was considered as one of these dead stars, whose rays, reach us through the centuries past. One has to blame the archaeologists, or the art historians. They saw nothing but the ruins … our plan was to deal not only with the brilliance of the ancient monuments, but also to relive the landscapes that surround them, the people, who are their everyday witnesses.”

Between 1903 and 1933 Boissonnas made several trips to Greece, funded by King George I in 1907, and with more substantial sponsorship in 1913 for the purpose of photographing and publishing imagery of the newly acquired territories of Epirus and Macedonia.

In 1904 he was commissioned by the hypnotist Émile Magnin (1865–1937) to make a series of photographs of his subject who had come to him in 1902 with incurable headaches. His treatment turned her into into a subject who spontaneously danced to the music of Frédéric Chopin, Franz Schubert, the poetry of Paul Verlaine, and piano improvisations, while supposedly unaware of her own talent and with no memory of her hypnotic trances.

Initially she performed in the studios of Boissonnas, Auguste Rodin, and Albert Besnard. Her expressive movement was admired all over Europe as an ‘artistic and psychological phenomenon of the highest order’. Examined by the Psychological Society, documented by court photographers, and portrayed in action by Secessionist painter Albert von Keller. 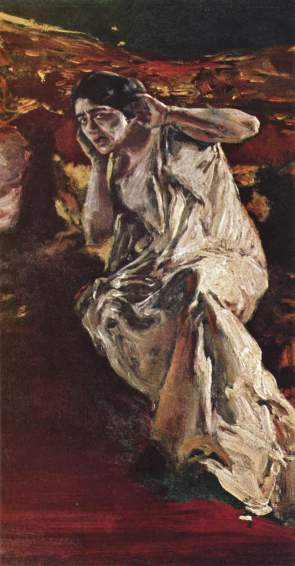 In fact, as Céline Eidenbenz reveals,  ‘Die Schlaftänzerin’ (‘the sleep dancer’) or ‘Die Traumtänzerin’ (‘the dream dancer’) was a thirty-year-old mother named Emma Guipet (neé Emma Archinard in 1874) of Georgia, USA—not the ingenue she was reputed to be. She lived in Geneva and Paris, modelled herself on Isadora Duncan and had received basic dance training from Swiss composer, musician and music educator Émile Jaques-Dalcroze who developed Eurhythmics, an approach to learning and experiencing music through movement. 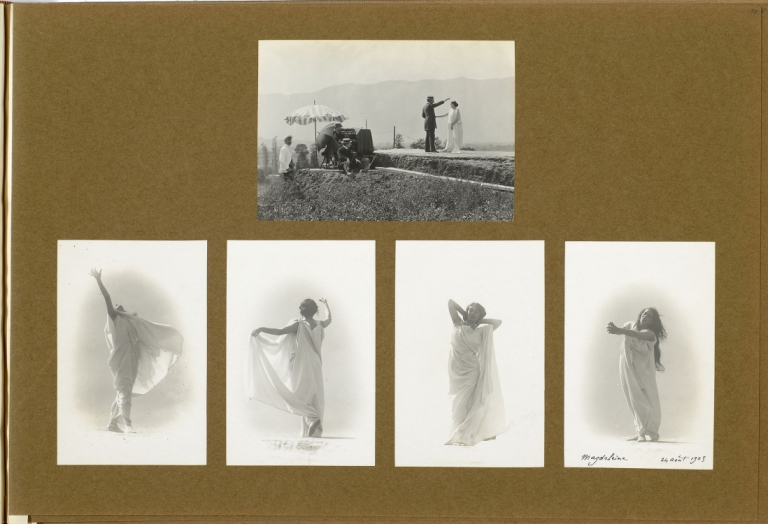 Having photographed her in his studio, Boissonnas met the dancer and her hypnotist at the Parthenon to make the series of photographs above in which she is cut out from the sky like a classical Greek bas-relief.

Is it coincidence, if one considers Emma Guipet’s connections, that Edward Steichen came up with the same idea for his more widely celebrated photographs of Isadora Duncan of 1923?

For Boissonnas there was a two-fold benefit in photographing the dancer in Greek peplum perched on an ancient marble plinth. First, it supported the ideas of Émile Magnin who, in his L’Art et l’Hypnose which hundreds of Boissonnas’ photographs illustrate, asserted that Phidias and Praxiteles had used to hypnotic suggestion to intensify their models’ expression, and that the bacchantes and sibyls of Horace and Ovid had put themselves into trances to be able to dance tirelessly and ecstatically. Secondly, and strategically, for the ambitious book publisher Boissonnas, it served the nationalist regional expansionism of the Greek government whom he was at that stage convincing of the value of photographs in advancing their cause internationally.

Imagery by the Greek, German-trained photographer Elli Souyioultzoglou-Seraidari (1899–1998) also recalls Boissonnas’ Magdeleine and she succeeded him in publicising her native land. Appointed as official photographer of the newly established Greek Ministry of Tourism, her naïve collaboration with the right-wing 4th of August Regime (1936-1941) later made her notorious as “the Greek Leni Riefenstahl”. In 1939 she decided not to return to the country during a visit to New York (where she became known as ‘Nelly’s’ for the typo on her business card) and there prospered from her advertising imagery for the Greek shipping magnates Stavros Niarchos and Aristotle Onassis and the White House.

Boissonnas had an exhibition Visions of Greece in Paris over February–March 1919 of 550 of his photographs, accompanied by a 260-page illustrated catalogue at which Edouard Chapuisat, editor-in-chief of the Journal de Geneve, announced:

“Today, all eyes are turned upon Greece, which aspires to regain that place in the East which she occupied so many centuries ago. The support of faithful allies anticipates the hour when Greece, which has given the world the purest jewels of civilisation, will contribute to the reconstruction of Europe on the very borders of the East.”

Between 1920 and 1926 his and his sons’ publishing house “Boissonnas SA” (founded 1919), under contract to the government, produced illustrated volumes with titles Smyrna, Thrace, Constantinople and The Greek Presence in Asia Minor, the text of which, he reported to the Greek government, “quite apart from the high artistic quality of the illustrations – reaffirms in the most categorical way the legitimacy of [Greek] claims over these contested regions.” 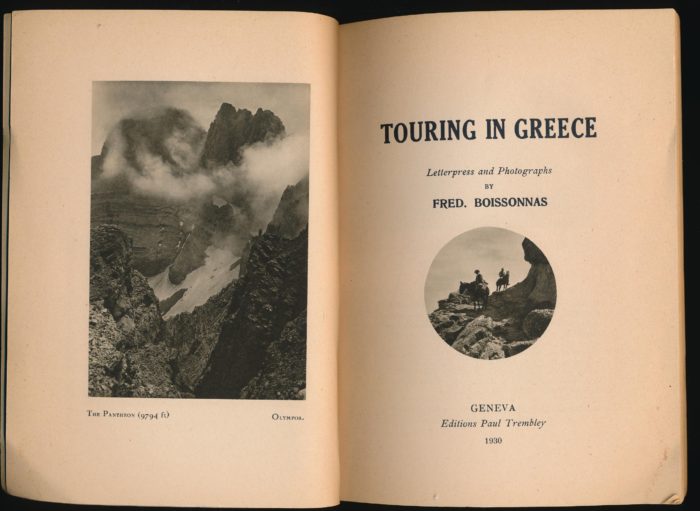 In total, Boissonnas published 14 photo albums dedicated to Greece, many of which belong to the thematic series entitled L’image de la Grèce (‘The Image of Greece’), his imagery contributing decisively to the identity of Greece in Europe; its promotion as a tourist destination but also its political situation.

The Greek Foreign Ministry’s press bureau, wanting positive coverage in the international press hired Frédéric’s son Henri-Paul to provide the Greek government with photographs, and to place some in the Swiss press, while his collaborator Fernand Feyler, a retired Swiss colonel and military historian undertook to publish articles in the Journal de Geneve and to publish a book on ‘the rights of Hellenism in Asia Minor’. Henri-Paul distributed at least 800 photos to the international press, and the Greek ministry paid the newspapers Le Matin, Le Journal, L’Écho de Paris and Le Petit Parisien 100,000 francs each during the course of 1921, committing the newspapers to “refrain from publishing anything which would adversely affect our interests [ … ] and furthermore, to publish the reports and bulletins with which we will supply them.”

Likewise, in Egypt, Boissonnas senior was contracted by King Fuad I in 1929 to work on a major book promoting his country, and he returned in 1933 to embark on a photographic expedition to Sinai to follow the journey  of the Israelites as recorded in the Book of Exodus.

The outcome, Égypte, set these histories as a background to the ‘modern’ state newly formed in Britain’s unilateral declaration of Egyptian independence on the 28th February 1922 and Fuad’s own monarchical role in 1922 and the Egyptian Parliament’s Constitution of 1923.

A second expedition that he prepared with extensive research on Sinai in the Geneva public library’s books on archaeology, Biblical scholarship and literature, as well as early travel guides, was to be published as Au Sinaï, a quasi-scientific, cultural and very personal document; the culmination of a lifetime’s study of the ancient civilizations of the Mediterranean. However, it remained unfinished at the time of the photographer’s death in 1946.

When properly reproduced, one can see why Boissonnas’ photography was so persuasive  and influential in projecting a national image.

One thought on “Politic”