November 6: The treasure of the archive is in discovering the photographer you were.

Only last Sunday I was at a meeting of fellow students of the photography course at Prahran College in Melbourne who graduated over the period of the 1960s to the 1980s. Urged on by Phil Quirk, Peter Leiss and Mimmo Cozzolino we were puzzling over how to attract the interest of a significant gallery, publisher or television network in an exhibition, book or film (or all three) on the lecturers, their teaching and on the work of the alumni of an institution we all feel was unique and which represents a particular era in the history of Australian photography.

The exercise prompted me to try again to find negatives from the period, though I know I’d lost most to a thorough tidying-up by an overzealous and well-meaning technician at a university at which I was teaching. I discovered in an Agfa packet a few negative sleeves containing pictures of our lecturers, miscellaneous assignments, folio shots and personal snapshots. Among them were photographs taken of spectators of horse-racing at Moonee Valley and at a country race meeting.

Tomorrow Australia stops for the Melbourne Cup or, as that reminds one particularly of the work of Rennie Ellis, one might say it is the camera that stops the race. Ellis has appeared here before in reference to his documentation of Kings Cross in Sydney, and his interest in the Cup (above), reputedly the richest two-mile handicap in the world with a purse of A$7,300,000 this year and dating back to 1861, is not in the horses.

As a social phenomenon, though crowds continue to fall steadily below the peak in 2010 of 110,000, it is hard to match, first because it is a public holiday and secondly because it sports ‘Fashions On The Field’ with prizes for the best dressed, male, female or anyone in between.

The earliest of Ellis’s coverage of the Cup dates from the 60s when not long after returning from sleeping under bridges in Europe and via a surfing trip from Portugal to Puerto Rico, he quickly rose up in, then moved on from, the advertising world to become Melbourne editor of the men’s magazine Chance, and taking pictures for it with no formal training in photography.

Thenceforth from his studio in Greville Street, Prahran around the corner from our College and notorious amongst its students, Ellis freelanced for Australian and international magazines including Playboy, The Bulletin, Walkabout, Nation Review, POL, Mode, Vanity Fair, Tatler, Vogue and Photo.

However, Ellis’s approach to fashion milieu was anything but reverent, and the Cup, at which alcohol and other stimulants are in copious supply, provided the perfect subject for his larrikin sense of humour, and his response to punters of the same persuasion, whether they be a raucous woman dancing on a coffin, or a determined, hard-drinking stick-in-the-mud at one of the wettest of Cups, in 1976. 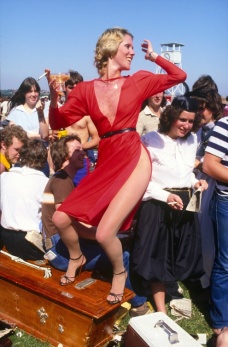 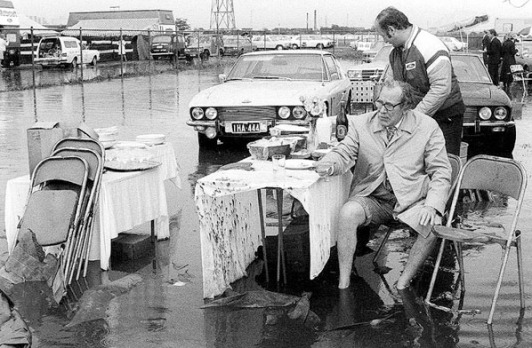 I look back at my work and realise I am a more serious fellow, or perhaps one more cynical when it comes to ‘the sport of kings’. The racing industry, conscious always of getting money out of punters’ pockets, pushes the idea that it is all glamour, high stakes and haute couture, mixed with a little 1920s gangster-era nostalgia.

What I saw at weekday meetings at Moonee Valley and at the country track back then in 1975 was quite unlike the scene at the big Cup. At the time married to one who hailed from a horse-racing family, this, my first time in the stands, was to be one of many opportunities to witness a distinctive subculture. So these are first impressions recorded on the one roll of film which remains, with other pictures, that I can still vividly see in memory from 43 years ago, now lost.

It was a realisation of the fact that if people are watching their dollars gallop around the turf, they won’t see you if you stand right in front of them…a valuable phenomenon for anyone conscious of invading personal space to know. The presence of a photographer then was infrequent, and no doubt it was assumed I was ‘from the paper’, so had a right to wave my lens around. I doubt I could do the same now without questions asked.

The punters of the 1970s, at least the older ones, dressed up, but they wore what they always wore to races as they would to church, things a little out-of-date even then, and a bit dowdy, shoes that pinch the toes, a hat that’s now too tight, a dark suit that gets too warm in the sun. Those who were younger wore their flares, turtle-necks, built-up sneakers and the jackets with ‘GT stripes’ popular at the time. There was a distinct generation gap.

My main impression however was that the lone, indeed lonely, punter predominated. Someone who might live in an inner-city rooming house or cheap apartment or in one of the ‘granny flats’ then to be found in many suburban back yards. Gambling didn’t appear to have made any of them rich, and not much fun appears in these pictures. I was certainly conscious of not making fun of these subjects either, but to let them speak for themselves, though it felt like a trip to meet Hieronymus Bosch.

Horse-racing impressed me as melancholy affair, full of anxiety, long waits and invariable disappointment. I’ve never been back to take more pictures, but I know if I did return that none of these people would remain, not even the next generations.

Racecourses these days feature horses labouring around the track in front of empty stands while the spectators regard them on the screen over the top of a beer in a pub, on their computer at home, or on a smartphone app. You’ll only find trainers, jockeys and strappers at the actual course.

Whether my pictures compete with Rennie Ellis’s is hardly a concern—they don’t! Their benefit to me, as a street photographer and observer of humanity, was the boost to my confidence that this proximity to my subjects brought.

The exercise of digitising the negatives directly with a camera brings some surprises; text on the form guides and betting slips is actually legible in some images, so I have a renewed respect for 35mm film and for my 1959 f1.4 Nikon 50mm, now long ago ‘borrowed’.

Photography is ephemeral, and the archive a treasure to preserve, if you only can.