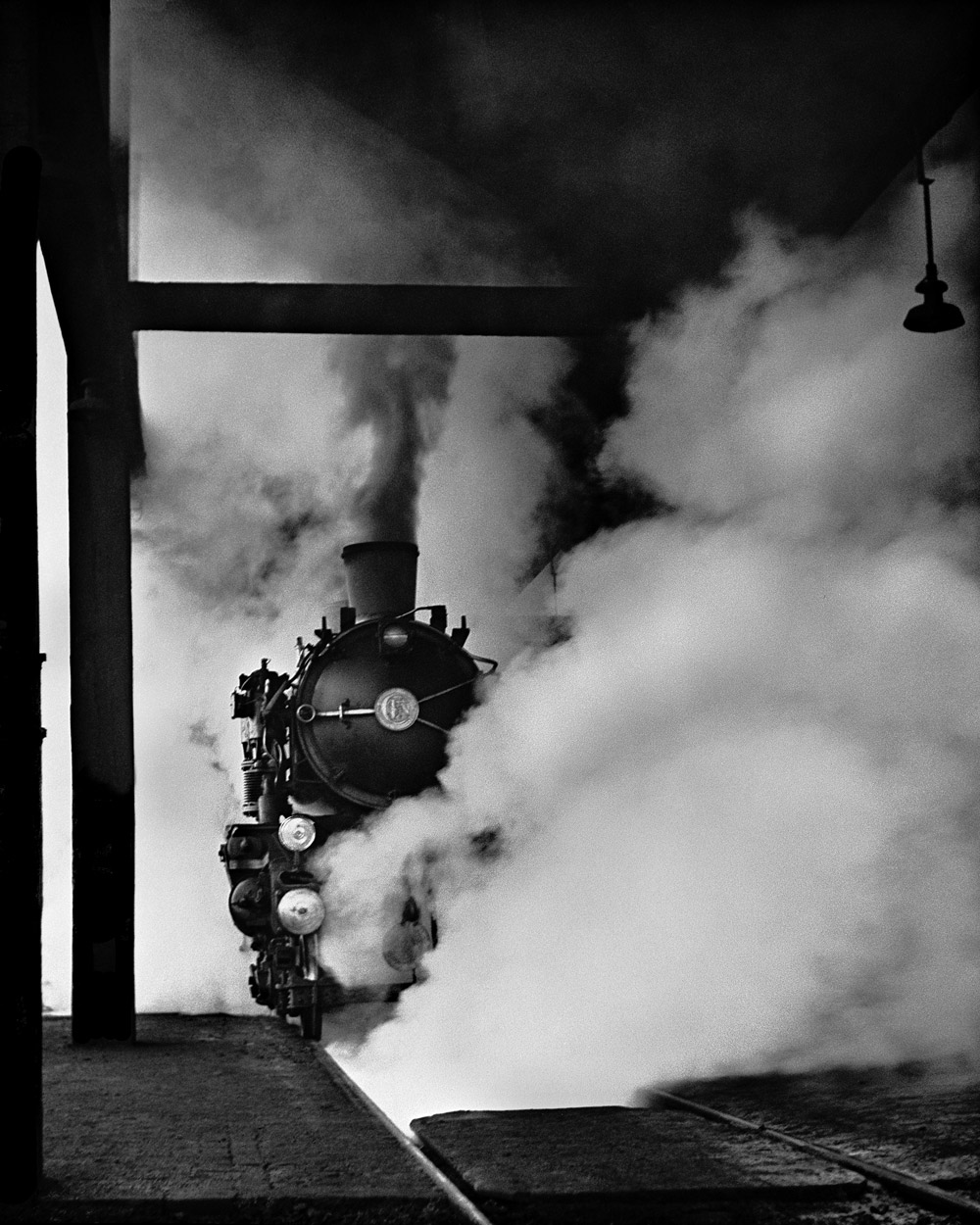 March 30: The Age of Steam runs parallel with the age of photography.

René Groebli, one of the most prolific Swiss photographers of the 20th century is now 90 years old. At about fifty he gave up commercial photography, sold his home and studio house and retired, devoting himself to photographic essays in colour and black and white: Fantasies, Ireland, The Shell, Burned Trees, NY Visions, New York Melancholia and Nudes.

Since then he has worked on his picture archive, digitizing his photographs made over more than 60 years. Exhibitions of his work have become more frequent as a consequence of both his age and the availability of previously unseen work. 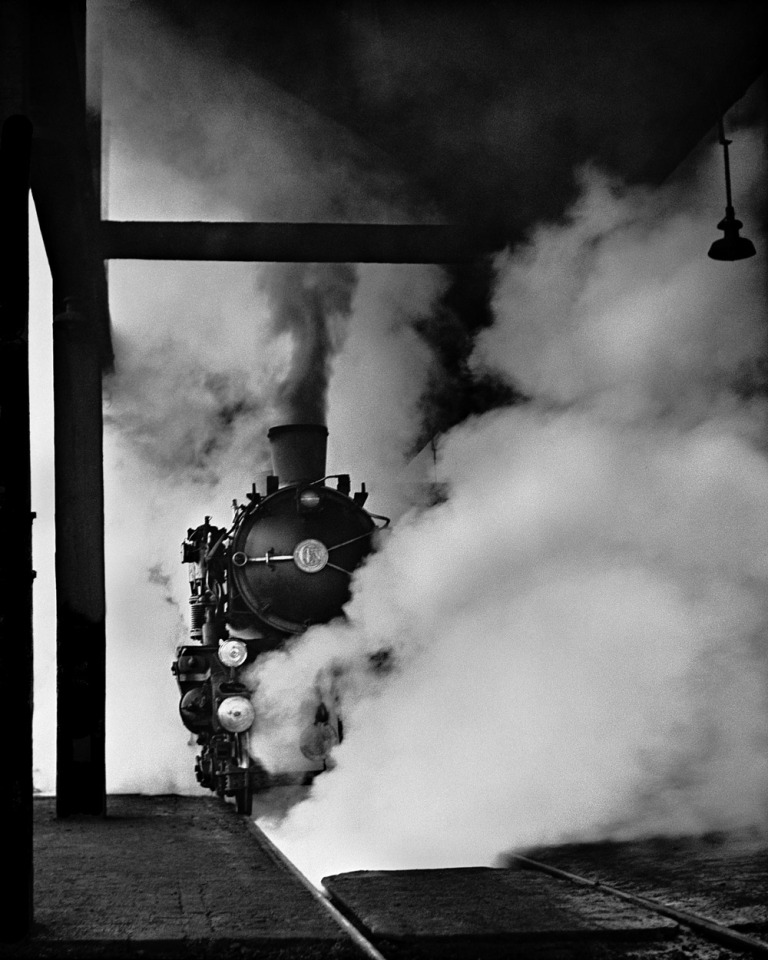 One might easily mistake the image above for an O. Winston Link (1914–2001)  since it is he that we associate with photography of steam engines, and his night scenes of powerful locomotives rushing through sleepy American hamlets are certainly a powerful evocation of the passing of that form of travel. In fact the image is from an exhibition at Kornhausforum, Kornhausplatz 18, 3000 Bern, of René Groebli’s Magie der Schiene, which ran 30 Mar – 6 May last year.

Most of us taking a train journey on the French railway from Paris to Basel would just sit back and enjoy the trip. Not so the twenty-two year old René Groebli. Magie der Schiene or ‘Rail Magic’ is the title of the photographic essay which he shot on the train and around Paris and in Switzerland in 1949.

Groebli gives us something Link does not; through the lenses of his Rolleiflex 6×6 and a Leica 35mm cameras he takes aboard the train, into the cab of the steam engine where one can sense the heat and hard labour involved in driving steel and fire along the rails, using effects not widely considered acceptable in photography of the era – camera shake, motion blur, rapid panning to enhance their compulsive subjectivity.

I can remember taking only one journey by steam train, other than short trips on tourist railways. In the mid-seventies, visiting friends near Castlemaine I took the train from Melbourne. What most impressed me was the speed, made apparent by the smoke, steam and cinders that hung in the air around, and in, the creaking wooden carriages, standing still as the train rushed through; an effect not unlike entering a bank of clouds in a plane, upon which one is suddenly confronted to realise that air travel is not a matter of just hanging in the sky. 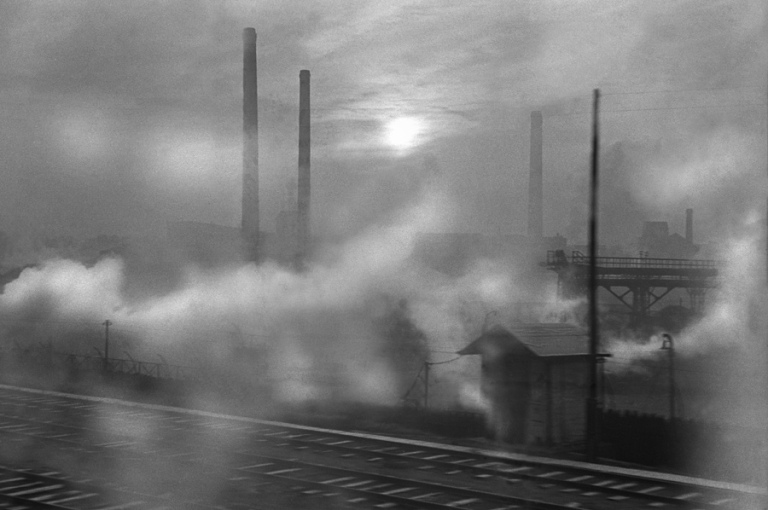 Then a young and relatively unknown photographer, Groebli was able to borrow enough money to finance the printing of the series in his first book. The pages are unbound and laid in loose so technically it is more portfolio than book, for which he was inspired by FACILE from 1935, which he had picked up on his first trip to Paris in 1948. The result of a collaboration of French poet Paul Eluard (born Eugène Émile Paul Grindel 1895–1952) with American-born artist Man Ray (Emmanuel Radnitzky 1890–1976), and with Eluard’s second wife Maria Benz (1906–1946), known as Nusch, posing for the images, it too is compromised of unbound folded sheets held within a hard cover, resembling a small portfolio more than a photobook. It inspired many photographers besides Groebli and is now an eagerly sought collectors’ item.

From FACILE Groebli has learned that sequencing and layout could augment and add an extra frisson to his already compelling imagery. Just look at the way the pairing of images across a spread multiplies the trajectory of rapid motion contained in both… 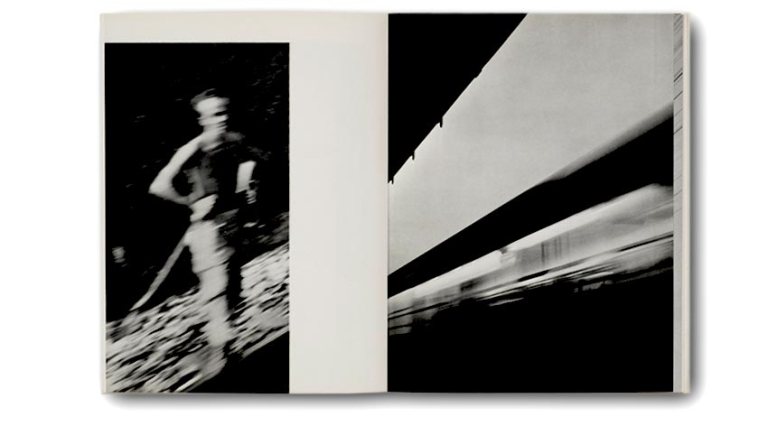 The poem La Bonne Chanson II (August 1869) by Paul Verlaine (1844–1896) is one of the first poems in any language that describes such scenes:

The scene behind the carriage window-panes

With streams and harvest-fields and trees and blue

Are swallowed by the whirlpool, whereinto

A smell of smoke and steam, a horrid din

As of a thousand clanking chains that pin

A thousand giants that are whipped and howl,

And, suddenly, long hoots as of an owl.

Eighty years after Verlaine wrote his poem, Groebli was one of the few photographers to have captured the energy of the steam era in a mere 16 photographs (including front and back cover), taking us on a journey into an era long gone. His book did also include a poem; Die Züge (The trains) by Swiss author and poet Albert Ehrismann (1908–1998).

[After World War II] photographers, both individually and collectively, turned their attention once more to making purely formalist pictures, exploring not only the aesthetic and non-documentary qualities of the medium, but also looking at new ways of making photobooks, and integrating photographs more closely with text and graphics.

Magie der Schiene (‘The Magic of the Tracks’)…demonstrates both aspects of this tendency. It takes a set of personal photographs investigating certain formal issues and turns them into an elegant photobook by carefully setting them into a framework of text, graphic design, typography and production. The result is a wholly integrated piece of work, with each element given equal importance. It is a superb example of the spare, clean, international style of graphic design developed after the war, and centered around the Swiss magazine Graphis….an extremely elegant mood piece, a self-assigned project turned into an immaculate showcase for the talents of all concerned. 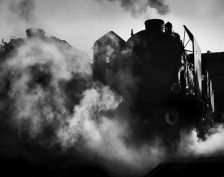 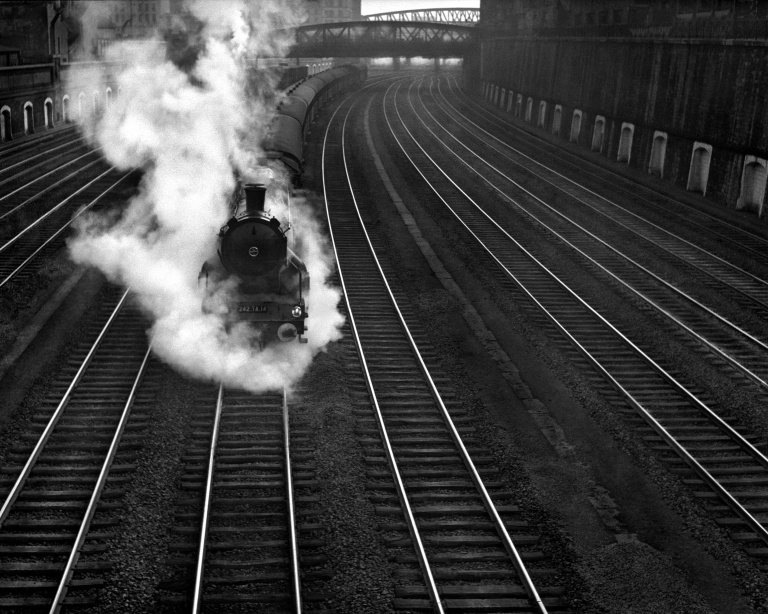