March 25: Two photographers provide insights into the contrasting conditions before and after the fall of Communism in the Soviet states.

Marie Šechtlová, born on this date in 1928 (†2008) was a commercial photographer in 1960s Czechoslovakia, and  Mila Teshaieva, born on this date in 1974 in Kiev in the Ukraine, has photographed since 2010 in the three former Soviet republics on the shores of the Caspian Sea: Azerbaijan, Kazakhstan, and Turkmenistan, 3,500km from Tábor, Czechoslovakia.

Marie Šechtlová married Josef Šechtl (1925–1992) in 1948 and in 1950 completed her apprenticeship in photography. Together they took over the photographic studio of Šechtl & Voseček in Tábor founded 1876 by Josef’s grandfather, and removed the skylight from the studio and modernised it with a full kit of electric photographic lighting. She was experimental, producing street photography, photomontage and photograms as well as her commercial work, while he was a portraitist.

With the studio on a solid financial footing both could afford time and energy to indulge in photography for its own sake, but in 1952 the Šechtl & Voseček studio was nationalised by Communist government. This early series on agriculture falls in line with the propagandistic imagery prevalent under the regime. 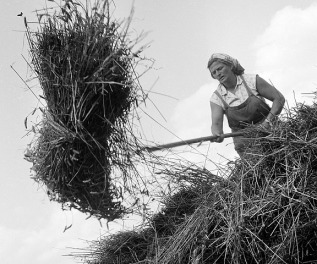 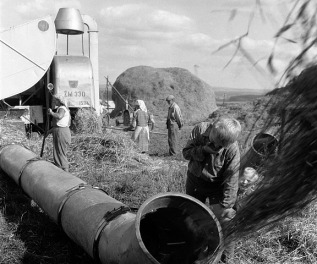 They were both able to  continue with their commercial business as well as to bring up their first child Marie Michaela born in 1953. Josef ventured into colour photography, despite its unreliability and the difficulty of obtaining chemistry. Patiently he learned the process, making correction filters himself, and eventually a picture of their five-year-old daughter with her little puppet theatre was published photo on the cover of the December issue of Czechoslovak Photography in 1957.

Their production even extended to film, with success in the same year, when they won second prize in a national movie competition for Moon, which in the following year they presented at UNICA international festival, in Ems, Germany.

From 1960 onwards they were winning awards in the competitions of the  Photography Association both ‘Artistic Photography’ and reportage. One of Marie Šechtlová’s frequent prize-winners was her evocative Rain song, Moscow shot through sheets of rain on a shopfront window pane. She was described being among the most successful photographers of “the poetry of the everyday”. This series was made in 1961 to record the integration of Roma children into Czechoslovakian society through schooling. By the time it had been published as a book Children of Captain Kohl by Jiří Štych in 1964, the experiment was deemed a failure. 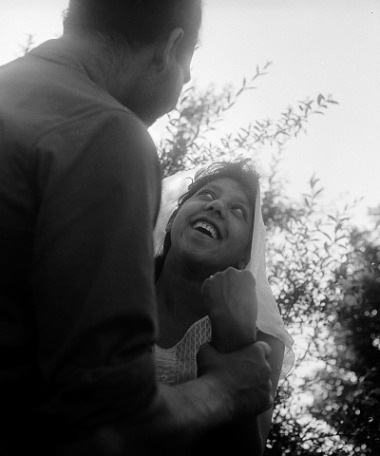 Marie Šechtlová (1961) From the series “Gypsies”, published in book “Children of Captain Kohl” by Jiří Štych in 1964.

Marie Šechtlová (1961) From the series “Gypsies”, published in book “Children of Captain Kohl” by Jiří Štych in 1964.

Unfortunately, the couples meteoric success aroused unwelcome interest in the studio archive from the Ministry of the Interior to whom they surrendered over 500 pictures dating from the liberation of the country from the Nazis by the Red Army at the end of WW2, sought by the communists for any incriminating evidence they might contain. But the authorities wanted the entire archive that the family had been collecting since 1865. The regime solved their refusal by arresting Josef. However before that, Marie had contrived to hide about 6,000 of the most important pictures of Tabor.

Later they were to learn that the negatives of the occupation had been thrown into the Jordán Reservoir and part of the rest was offered to the Museum and the District Archives, who took off (as Archbishop Karel Poustka reported to the Regional Administration of the Ministry of the Interior): “four carts of negatives, the museum took over 18 boxes and the Agricultural Technical School, a few”, while the remainder were lost.

Their creative activity after the husband’s release, however, continued, though they limited themselves to photography. Photo-historian Robert Hirsch emphasises the obstacles they faced working under Soviet rule;

Šechtlová’s lyrical approach, situated within the Czech avant-garde lineage, which creatively sidestepped the difficulties of expressing humanistic values under a repressive communist regime that imprisoned her husband for his photographic activities. 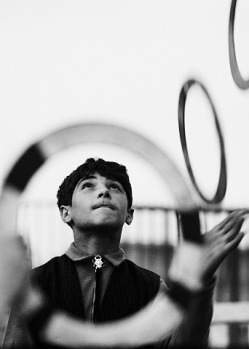 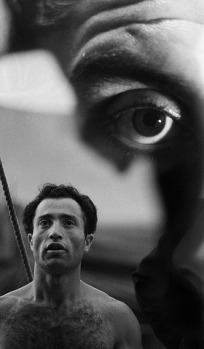 Marie Šechtlová (1963) from the series Circus. 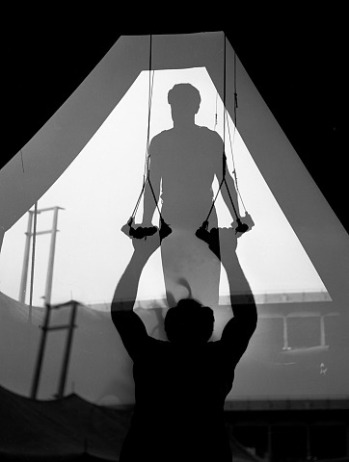 The series Circus shows that Šechtlová had adopted montage in order to augment the narrative content of her images.

While in Czechoslovakia, as everywhere else in the 1960s, the trend was toward high contrast, tone-dropout renderings of the photographic image, Šechtlová maintains a level of softness and tonal graduation in her prints, while her use of strong silhouette ensures the graphic element remains strong, assisted by her almost exclusive use of medium format 6×6. Here she is seen using what is currently, the most sought after Meopta Flexaret, the VI A model produced from 1950 to 1957, twin-lens reflex camera for a roll film 60 mm with SVS Prontor shutter of 1-1/400 s and an adapter for 35mm films.

One of the studio’s marketing innovations was to encourage the use of mural-scale photographs in interior decoration. In the mid-sixties government repression had eased and she produced a number of modest nude studies. 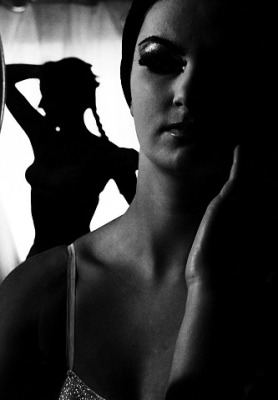 Marie illustrated a number of books with her photographs including a poem by Jan Noha (1908–1966), published in Photography Revue, and exhibited her work for the first in the gallery ZK Jiskra, in Tábor in 1961, then in Germany that year, before being nominated for membership of Association of Czechoslovak Artists.

Though they were hard-won, by the mid-sixties she could afford trips to Estonia, Lithuania, Latvia, and even the USA which resulted in an exhibition in Brussels and a book New York with E. Fuková and M. Novotný, and exhibitions in major centres including  Cairo, Alexandria, Berlin, Moscow, Leningrad, Kiev and Paris. This work included ventures into semi-abstract colour, achieved with slow shutter speeds and camera movement. 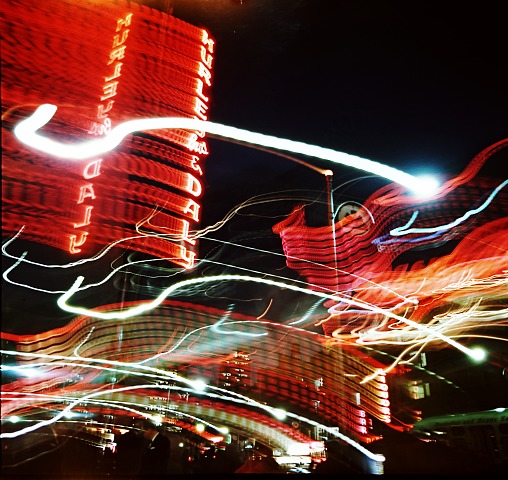 Joint book publications with Josef followed through the 1970s until his death in 1992. She patiently waited for a time of freedom to come again and unlike Josef Šechtl she lived long enough to see it (she died in 2008) and to revive the studio which she reformed as the Šechtl and Voseček Museum of Photography.

Though the studio itself by then had been demolished, at U Lípy House, Náměstí Mikuláše z Husi (“Nicholas of Husi Square”) Filipovská 72, Tábor, in the Czech Republic, the Museum houses the 142-year-old archive of the studio and stages irregular exhibitions based on the collection. Marie’s Daughter Marie Michaela, with her children Jan and Eva Hubicka maintain the museum and are digitising the collection. 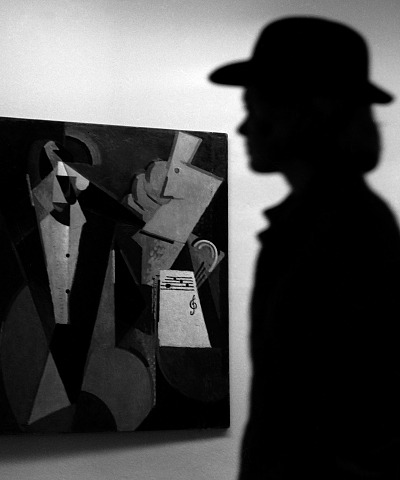 Though seriously ill, Marie starled to take the first steps towards getting to know computer technology, and until her eightieth birthday created digitally-coloured and manipulated versions of her black and white archive.

Mila Teshaieva worked as an economist before turning to documentary photography and has since worked around the world on bodies of work including: the aftermath of War in Georgia, HIV/AIDS in Ukraine, Asylum seekers in Germany, recovery after the Indian Tsunami and has been investigating the ongoing transition processes in post-soviet societies as a passionate and engaged researcher since 2004. Maintaining long-term projects on the territories of former USSR, and always with awareness of the effect of change at a political and economic scale on the individual, she has dedicated last few years working in the Caucasus and Caspian Sea region, resulting in her first monograph Promising Waters (Kehrer Verlag in 2013), and Faces and Stories of Enterpreneurs, for which she was commissioned  by Swiss Development and Cooperation, published in 2015.

Azerbaijan, Kazakhstan and Turkmenistan are countries now independent from Russia, and they possess rich oil and gas reserves which poses an enormous challenge for these countries in defining themselves as independent nation states. The promise of wealth comes at the price, she says, of the “disappearance of a natural way of life, and people who live between past and future values.”

The imagery is vivid, and to some extent staged, and she believes it sits within:

the borders of documentary – coming to a place, spending time with people…The construction of ‘a new state’ and new pride in these places seemed to me to be like a play where the environment is decoration, created especially for the play.

Mila’s work has received multiple distinctions for her work, among them 1st prize in NPPA Best of Photojournalism 2010, Critical Mass Book Award and PDN Photo Annual and appeared on the pages of Courrier International, British Journal of Photography, Time Magazine Lightbox, among many others. Her Photography Projects were exhibited internatonally, with the most recent solo exhibitions in Haggerty Museum of Art (USA 2015), Blue Sky Gallery (USA 2015) and Museum Art of West Coast (Föhr 2014) and is holding an exhibition InselWesen:InselAlltag (‘Island beings:island life’) at the Museum Europäischer Kulturen, a project she undertook on the island of Föhr, one of the North Frisian Islands on the German coast of the North Sea, in collaboration with the Museum who interviewed some of the participants. With the technique of “light painting” in complete darkness and using a torch, she has ‘painted’ the subjects into their locations, resulting in an unreal, stilled and mystical atmosphere.