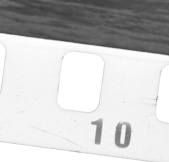 March 10: The sudden cool as you duck into the shade of a verandah, the frosty shadows on a green winter lawn, the startling white of breasts on a tanned body, and on a red apple the discovery of an image of leaf and stem imprinted. Such manifestations of “writing with light” have been with us forever.

It was the fixing of shadows that transformed such phenomena into that special instance of our medium; the photogram.

…the inimitable beauty of the pictures of nature’s painting which the glass lens of the Camera throws upon the paper in its focus–fairy pictures, creations of a moment, and destined as rapidly to fade away…

…..how charming it would be if it were possible to cause these natural images to imprint themselves durably, and remain fixed upon the paper!

And why should it not be possible? I asked myself.

It was that last question that points to the genius of invention; the conception that what is not, might be made.

The picture, divested of the ideas which accompany it, and considered only in its ultimate nature, is but a succession or variety of stronger lights thrown upon one part of the paper, and of deeper shadows on another. Now Light, where it exists, can exert an action, and in certain circumstances, does exert one sufficient to cause changes in material bodies. Suppose, then, such an action could be exerted on the paper; and suppose the paper could be visibly changed by it. In that case surely some effect must result having a general resemblance to the cause which produced it: so that the variegated scene of light and shade might leave its image or impression behind, stronger or weaker on different parts of the paper according to the strength of weakness of the light which had acted there.

Such was the idea that came into my mind.

To do so, from such fancy, he begins to look for the means amongst what he knows to already exist, settling on what he learned from the “chemical writers,” that “the nitrate of silver is a substance peculiarly sensitive to the action of light”. From there proceeded long experimentation and trial and error, the incorporation of the discoveries of others such as “a remark of Sir H. Davy’s which I had casually met with –that the iodide of silver was more sensitive to light than the chloride,” until ultimately he had succeeded in fixing the “focus–fairy picture”.

Gathering around Talbot’s invention, such figures advanced it so that it became what we came to know as the negative/positive process, the speed of which they accelerated and its ease of use facilitated through collodion on glass and eventually flexible film. The simultaneously discovered daguerreotype process became redundant and withered, partly because patent restrictions in Britain prevented the involvement of sufficient numbers of others in its development, but because it did not permit multiple copies to be easily made.

Amongst the many excited by the disclosure of Henry Fox Talbot’s invention of the ‘talbottype’ (the earliest printing-out version of calotype that was produced without chemical development) were Nevil Story Maskelyne and Dillwyn Llewelyn.

Maskelyne first encountered the medium when in 1840 optician George Dolland (1774–1852) visited his home at Bassett Down and showed him how to make ‘Sun Pictures’ (photograms) and so excited was he that in 1845, Maskelyne, to the frustration of his father, abandoned his law studies; such is the entrancing power of the photogram.

Both Maskelyne and Llewelyn, like Talbot, were Fellows of the Royal Society and they had the scientific knowledge to improve photography.

Since then and with the same excitement, many others, artists not scientists, many because of their first experiences in making photograms, have asked themselves similar questions about the action of light. Among them are the participant exhibitors in Antipodean emanations: cameraless photographs from Australia and New Zealand, curated by Stella Loftus-Hills, which opens today at Monash Gallery of Art (MGA) 860 Ferntree Gully Rd, Wheelers Hill, Victoria 3150 continuing until 27 May.

The show deserves several visits in later posts, but one of those showing in it who particularly impresses me is Lloyd Godman (*1952) whom I met at Otago Polytechnic in Dunedin New Zealand where he then was the lecturer in charge of the photography program that he had established and from which he departed to live in Australia in 2006. He is a compact, wry individual, of twinkling eye, whose quick intelligence impresses itself through his soft and persuasive speech.

His contemplation of photography led him back to photosynthesis, for which he named his project  Photo-syn-thesis. The work grows, quite literally, from a conception of the plant as “an abstract photosensitive emulsion”.

For Cause and Effect, by masking off areas of bromeliad plants and exposing them for months to sunlight Godman “bionically imprinted” symbols on the living tissue of the leaves. Here the result is recorded in conventional images because the organic photograms fade as the plant grows and dies.

The alchemic symbols are an evocative representation of photosynthesis; the  transformation of carbon dioxide and water by light into sugar, the chemical energy by which the plant flourishes, and oxygen without which organisms like us would perish.

Earlier in his career, before taking up teaching, Godman was Otago’s audio-visual technician, and consequently knew the secret recesses of the campus, one being the ‘Plant Room’ which housed the boilers that warmed the buildings over Dunedin’s cold winters. It was an appropriate place in which, in his role as lecturer and artist, he could conduct his experiments on his heat-loving bromeliads.

Lloyd Godman (2006) Planet III – tank lid template forming biotic imprint on grass Planet II Ephemeral sculpture, discarded corrugated iron water storage tank lid – grass – 2.4m x 6m approx
In his 2006 Planet III  Godman used a tank lid rescued from a hard rubbish collection as a template to create an imprint on grass. The simple exercise of placing the carefully cut and crumbled rusted tank cover on the living grass for a period created an image from bright, photosynthesising grass and a more feeble yellow-green where it had been deprived of light.

the largest photosensitive emulsion we know of is the planet earth. As vegetation grows, dies back, changes colour with the seasons, the “photographic image” that is our planet alters. Increasingly human intervention plays a larger role in transforming the image of the globe we inhabit

As a keen organic horticulturist Godman has created gardens to suit the very different climates of his residences in Kauai, Hawaii in 1974, in Dunedin from 1976 to 2004 and finally in St Andrews, Victoria, in 2005. From that experience, in 1995-6 came an insight, like that of Henry Fox Talbot which he describes in The Pencil of Light, that was to impact on Godman’s practice and opened…

…a long and enchanting pathway that I could not have imagined. At this time I made a profound but simple realization. That living plants are actually a form of photography, they use light in the same way film does.

Behind the works described here is a philosophy and deeply held ecological belief system which also derives from Godman’s passion for gardening. The Plant Room opposes the carbon-dioxide-spewing coal-powered furnace, the industrial ‘plant’, and the oxygenating natural plants, for example.  As opposed to the massive work being shown at MGA Evidence from the Religion of Technology of 1993-94, the plant-based works are optimistic and life-affirming. Evidence is a 22-metre long composite photogram intended to form a continuous cycle when installed with no beginning or end. Constructed from photograms on chromogenic paper the matter used to form the background is the detritus of technology. 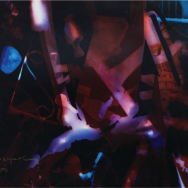 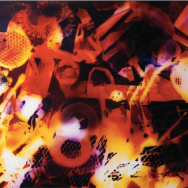 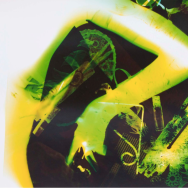 Three figures, of a woman, a man, and a skeleton emerge from a this ground, a crowded, roiling mass of consumer objects that runs through a spectrum that generates an emotional temperature in response to its graduating swathes of botanical green through bruised violet and crimson incarnadine.

The living figures emerge ghost-like as negatives, lighter voids, from the surrounding confusion, while the skeleton is constructed partly from the mass that surrounds it and sinks into it. Like those of a child’s paper doily, the figures remain linked in their repetition by the band of technological clutter, arms stretched as if crucified or in supplication. It is only against the green figure that we find forms, scrolled, leafy or feathered that evoke a sense of grace. Perhaps there is hope here. It is hard to envisage how a legitimate photogram might be made from digital media. Certainly an original photogram — and most are unique works — might be copied and reproduced with the contemporary technology of our medium, but the production requires a light sensitive material on which in most cases actual objects have been placed to form shadows. It is actually the light that envelops them that is being recorded by a substance that will respond to light.

Godman’s inspiration is that the material he chooses for the making of his images is alive.