January 4: Abstraction in photography, a medium that is unavoidably referential, now has a surprisingly long pedigree.

Abstract! 100 Years Of Abstract Photography, 1917–2017, which continues until January 14 at the The Finnish Museum of Photography provides an opportunity to gauge its history and to consider current manifestations. It presents more than 100 works, a large number by Finnish artists from different periods, as well as the famous international early abstractionists László Moholy-Nagy (1895–1946), Man Ray (1890–1976), and August Strindberg (1849–1912).

Niko Luoma (*1970) points out that his 2015 Self-titled Adaptation of Guernica (1937) mural-scale pigment print is an adaptation of Picasso’s famous work, not its descriptive and iconic treatment of the momentous massacre of 26 April 1937, “but its spatial solutions: geometry, rhythm, direction and weight” in “…a dialogue between me and Picasso’s painting, between the photograph and the memory image…”;

I created my photographic work using an analogue process, with dozens of exposures on two sheets of film, and with every resulting shape in the photograph being its own exposure. My sole material is light, which is coloured using a variety of filters, and shaped in the studio using a variety of materials…My working process is performative and based on intuition, resembling composing, and involving deconstruction and rebuilding.

As has been pointed out, Luoma’s earlier “abstract photographs of time” can be likened to the experience of listening to a musical piece, while this is a ‘replay’ of the visual artwork Guernica. The forms and dynamics remain, and the warm and cool colours translate the emotional temperature of the monochrome original in the mourning and outrage enacted by figures in the painting. No doubt anyone who has seen Picasso’s work would recognise its structure, and signs of its passion, here. It is a fact that some, as they recall the famous Spaniard’s work, see it painted in colour.

One can go back sixty years to find another’s agreement with Luoma’s declaration that his ‘sole material is light’, and that photographer is Marta Hoepffner, born on this date in 1912, who in 1957 suggested;

Optical values take on a life of their own in photography. Light, shades, shapes and intermediate forms can become the content of an image for independent, often abstract form.

Another 30 years before that, 80 years before Luoma’s Guernica was made, and in the same year as Picasso urgently painted his original, Hoepffner produced these two photograms, at left a visual representation of music by Spanish composer de Falla who wrote a transcription of Stravinsky’s L’Oiseau de feu, to which Hoepffner here refers; and on the right is her Homage to Kandinsky, also of 1937. 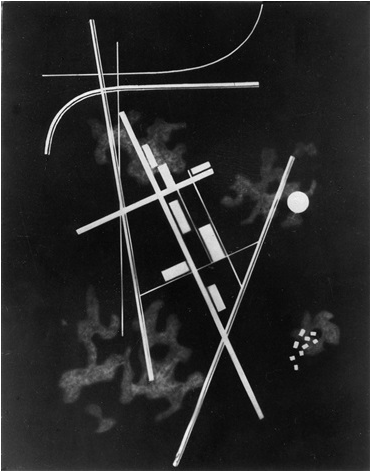 The form of Falla’s favoured guitar, the history of which the composer underlined, is made dominant and arguably is a direct representation. Its playing in Spain’s Castille region however, with rasqueado, or strumming, in cante jondo (an Andalusian folk flamenco vocal style) which Falla praised as “a marvellous revelation of the possibilities of sounds”, can be read in Hoepffner rhythmic placement of repeated forms – as a kind of musical notation.

To compare a Kandinsky painting of the same year with Hoepffner’s Homage is to discover passages of imitation, though no direct transcription, in the placement of strips and rectangles on the photographic paper in the darkroom and a translation of Kandinsky’s nebulous colour into monochrome with transparent forms in tones of grey.

Hoeffner’s background and her several trips to Paris in 1937 meant that she embraced  Modernism, experiencing it at first hand, and she may have seen Kandinsky’s work there. She grew up a middle-class child in Pirmasens in Germany near the western border with France. A friend of the family was Hugo Ball (1886–1927), one of the founders of the German Dada movement. Hoepffner’s mother enjoyed the avant-garde and her parents encouraged Marta’s talents in drawing and painting talent, and her taste for science subjects.

The family moved to Frankfurt am Main when Marta was fifteen and from 1929 to 1933 Hoepffner studied painting, graphics and photography at the Frankfurt Art School, later a Städelschule, with Willi Baumeister (1889–1955).

With the rise of the Nazis and their abhorrence of modernism, Baumeister lost his position as lecturer at the art school. Hoepffner interrupted her studies and in 1934 set up her “Workshop for artistic photographs”. Her high-contrast light studies completely break with the still-prevailing pictorialism and look forward to her later non-representational work.

In 1937 she received an exemption for her training  and was promoted from ‘journeyman’ to master craftsman for her efforts in colour photography made with the complex Duxochrom process requiring a special colour camera (none of which seem to have survived). She survived on picture stories for the Illustrierte Zeitung, and portraiture of soldiers and public figures. She kept her artistic practice secret.

During the war self-portraits and still-life provide her with an opportunity to practice innovations without the knowledge of others which may have attracted unwanted attention from National Socialist authorities. 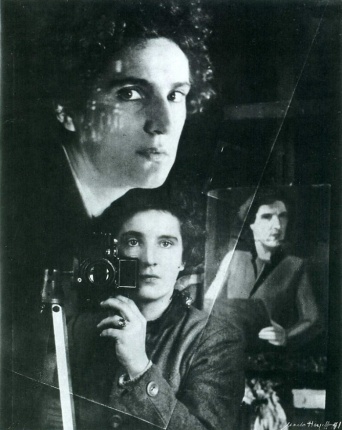 Her studio in Frankfurt was bombed in 1944, but fortunately she had shifted her experimental work and technical equipment to Hofheim am Taunus, and there she set up a makeshift studio and laboratory, also finding her family a place to stay there.

From 1939 to 1945 she continued the photographic experiments and the application of new techniques such as solarization, double exposure, crossfading and negative images, even though the circumstances under which she developed her artistic work were anything but easy.

In the immediate post-war years, acquaintances and friendships developed with Ida Kerkovius, Max Ackermann, Heinrich Wildemann in the Stuttgart circle around Willi Baumeister, and in Hofheim am Taunus with Hanna Bekker vom Rath , Marie-Luise Kaschnitz , Ernst Wilhelm Nay (below) and Karl Schmidt-Rottluff. Collector Dr Erich Stenger made the first purchases of her artistic work (now held in the Stenger Collection in the Museum Ludwig -Agfa-Historama, Cologne).

From 1943 Hoepffner had already trained apprentices in her studio, and in 1949 with her sister Madeleine she decided to set up an eponymous private photography school at Kapellenstraße 4, Hofheim am Taunus, a spacious villa with a large garden. It attracted students of 18-20 from all over Germany.

The emphasis was equally on craft and artistry and the course was based on the Bauhaus approach, with a comprehensive curriculum that went beyond everyday photography to introduce experimental photographic techniques, as well as a professional standard and certificate in advertising and fashion photography and portraiture. In addition to the two sisters, others teaching at the school were Siegfried Reich an der Stolpe (1912–2001), Franz Fritzen, Fridolin Frenzel (*1930), Christian Peschke (1946–2017), Hermann Krupp (*1926) and Heribert Weber. Irm Schoffers (1927–2008) remained after her training to help manage the school, introduced 8mm and 16mm filmmaking and pushed the limits of photography with polarised colour photograms using the technology of the familiar scientific microscopic magnifications of crystals.

In 1971 Hoepffner shifted the school from Hofheim am Taunus to Kressbronn am Bodensee on Lake Constance then, after 25 years she closed the school in 1975 to concentrate on freelance work and her artistic production, inspired by new discoveries she had made in  ‘light kinetics’ around 1965.

Her ‘vario-chromatic-light objects’ were produced in the enlarger with polarising filters above and below transparent collages of celluloid plastic and glass. Changing the orientation of one of the filters can alter the whole field from light to dark (as below) and introduce prismatic colours through interference, to produce an array of variations.

From 1967-1969 she was invited to international exhibitions of kinetic art, which took place at Kunsthalle Recklinghausen, Kunsthalle Nürnberg, and the Karl Ernst Osthaus Museum in Hagen. In 1971 after moving with her sister Madeleine and Irm Schoffers to Kressborn on Lake Constance and a second home in Spain in 1972.

She was given her first retrospective Photo Experiments and Light Kinetic Objects, 1936 to 1976 in the Centre for Art, Liechtenstein. In 1979, the Karl Ernst Osthaus Museum in Hagen organized the large survey exhibition Early Photographic Experiments and Color Photograms for the Years 1935 to 1965. From 1981 to 1982 she was involved in the exhibition Avant-garde Photography in Germany 1919-1939 touring several US cities and in 1984, the Pfalzgalerie Kaiserslautern showed photographs and light objects.

For their geometry and their optic origin, these are works that would not look out of place alongside Moon (Sharpen) by Marko Vuokola (1967) in ‘Abstract! 100 Years Of Abstract Photography, 1917–2017’, even though the latter is achieved as an exaggerated artefact of digital imaging, but they relate especially through their spectral, optic and photochemical derivation to the filtered abstractions of Niko Luoma.

Both younger artists would agree with Marta Hoepffner’s summation of her achievement  at 70 years old (in 1982);

I think that I managed to bring into consciousness the medium of light as the source of all colours. I am concerned with the visual concretisation of a reality which can not be illustrated by painterly means: light, space, movement.

The Marta Hoepffner Prize for Photography which has run since 2002, was named for her.