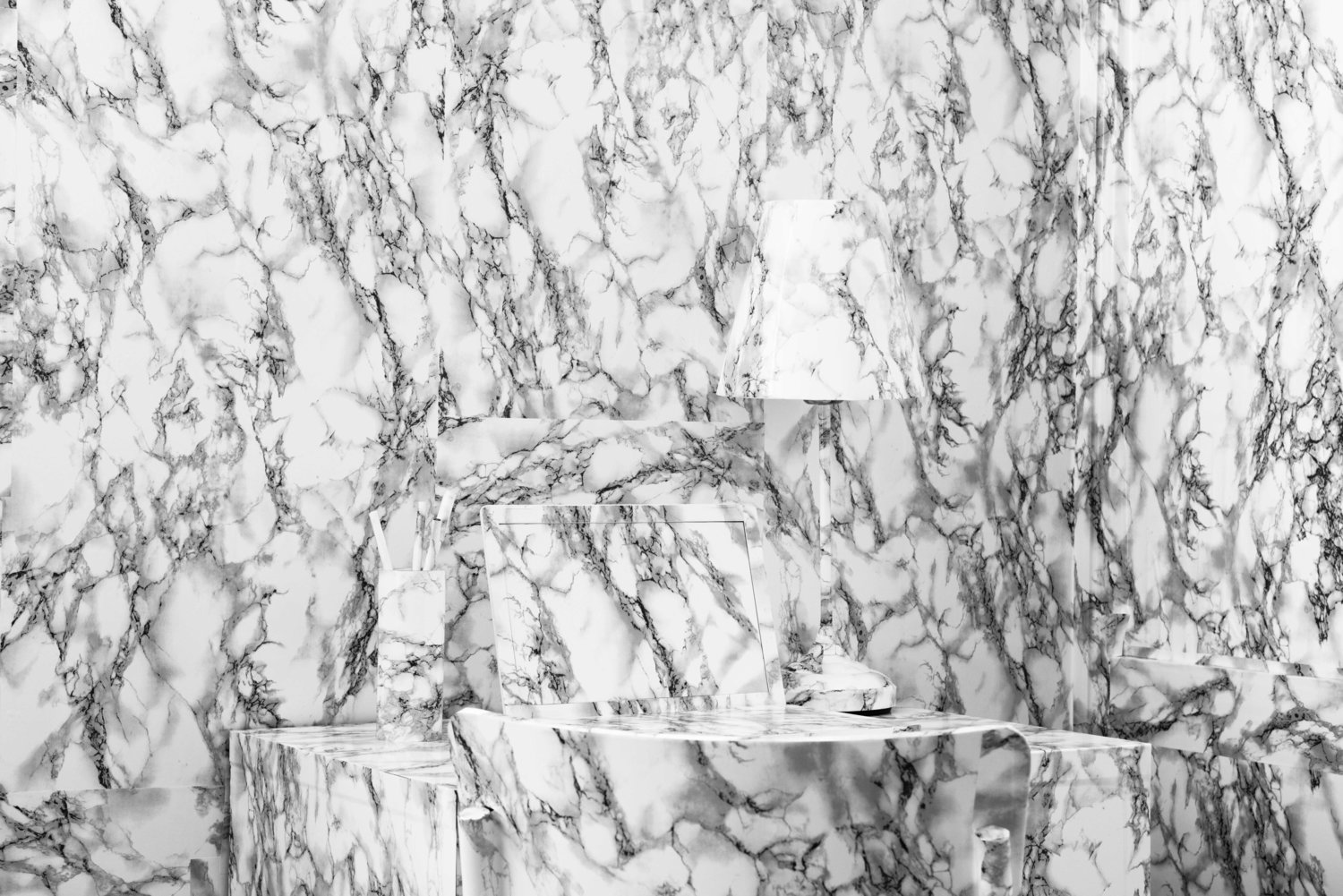 December 2: The photograph is easily repeated, copied and reproduced; sameness and similarity comes naturally to it. Two photographers explore this idea in their series.

Incidentally, each has transformed their approach while undertaking a degree in photography.

Today is the birthday of Catherine Cameron (*1962, Oslo) who lives and works in Ayrshire and Glasgow, UK. In 2013 she went back to study, undertaking a BA (Hons) Fine Art Photography from Glasgow School of Art (GSA) after having exhibited her works internationally since 1999.

Girardin, 27 years younger than Cameron, undertook  a BA in Fine Arts, also in 2013 from the Zürich University of the Arts (ZHdK) followed by a MA in Visual Communication and Iconic Research at the Basel School of Design (HGK) in 2015. Her thesis asked;

Ex. 2: Pieces of wood on the floor. Joseph, a carpenter, takes the wood and makes a cradle. The wood has now become an object and, thus, our perception of it changes; we forget the materiality of wood and, instead, see a finished object appear, which has us perceive it as a construction.

Did the candle disappear? Is the wood no longer wood, but only a cradle? Or a wooden cradle?

Arrays of objects that we are used to seeing constructed of different materials Girardin presents as all being made of this same substance; a chocolate-coloured, prominently-grained generic timber. Their sameness uncovers a slippage that has occurred in our understanding of objects; when we live amongst more things than any humans before us have had, we have lost our comprehension of how and of what they were made, and only a few of us, the photographer points out, have the capacity to make them. Industrialisation, mass production and factory assembly lines have taken that from us, but left us with endless repetitions of the same object. This is a subject eminently suited to her medium.

But her images pose another question; how were they achieved? While all sorts of techniques, from elaborate photoshopping to 3D texture mapping, might have been employed, her approach was simple in concept, but required considerable effort in production. Each of the objects have been covered in the printed, plastic-coated paper used as a shelf-covering or as a cheap veneer. This fact is only visible in a close examination of an earlier iteration of one these subjects…installations, in fact.

The adhesion of the sticky material to the computer screen has left a few bubbles and negotiating the complex curved surfaces of the base of the table lamp has resulted in  creases.

This and another couple of shots have a 35mm format, and the image of the bedside table includes a handle and walls not covered in the patterned veneer – it might well have been taken in a cheap hotel room – and both it and the kitchen shot are a little askew.

The final image of the work desk that appears in the exhibition is more carefully finessed, made on a larger format for more detail, in flatter light that conceals any faults in the application of the covering, and slightly over-exposed so as to camouflage the objects to the point that they are almost invisible. 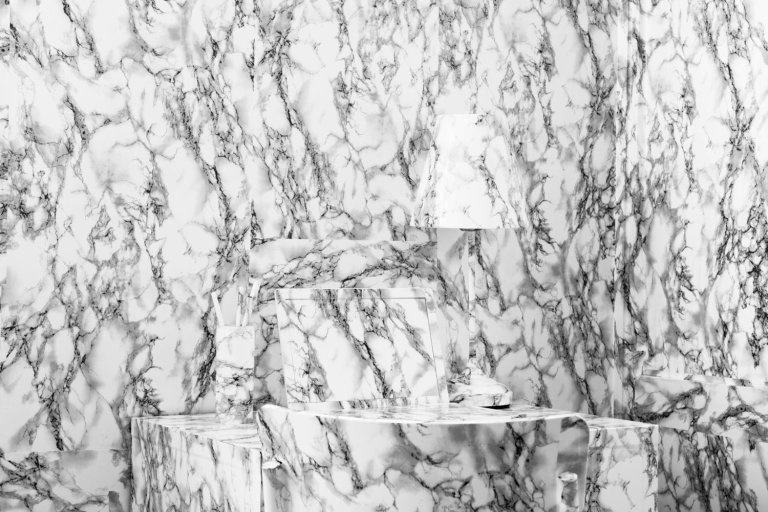 In the kitchen, our attention is shifted to the bench top and the dotted ‘noise’ pattern immerses the objects in a sea of static. 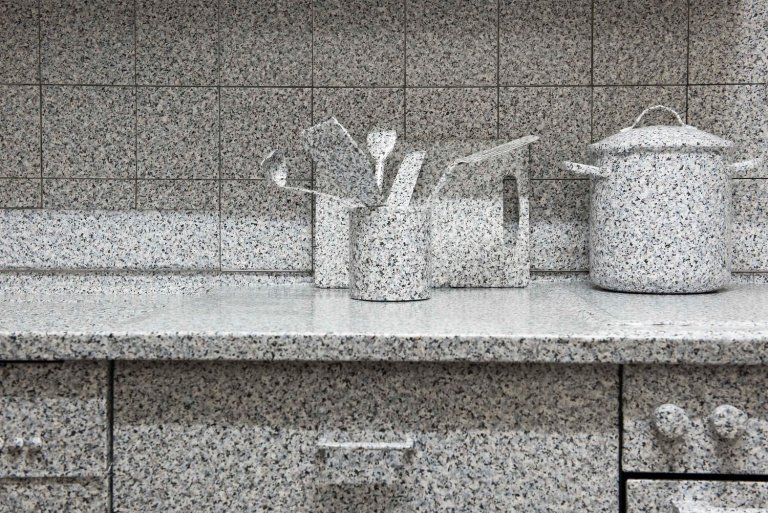 Catherine Cameron’s image Pick me up (and) put me down again has a superficial similarity to Girardin’s work, and also refers to habitual thinking.

Her interest is in repetition too;

…in the cyclical nature thoughts and behaviour, the actions we repeat regardless of the results. I am interested in the role that hope holds in our lives, from its lifesaving capabilities to its detrimental aspects, when hope prevents us from making necessary changes, moving on. The playwright Henrik Ibsen described this as the Life-Lie, a state of denial, the life-lie becomes a detrimental zone of comfort, a space inhabited by emotions like longing, melancholia and loneliness.

Objects in her pictures shift shape and melt into each other. Made in her studio and printed to a mural scale, these are also the result of much darkroom work. Cameron prefers to shoot on large format film, which enables a superimposition of negatives which amplifies her ideas, as she expresses so eloquently ;

I create staged, analogue photographs. I work with natural light and print the work in my darkroom. The staging is repetitious both in materials and settings. I deconstruct and reconstruct the same forms and shapes over and over again.

The overall texture is of cloth and creased paper, and as it is layered through multiple printings it becomes transparent like tissue, then with the accretion of layers, in some passages or whole prints takes on a rock-like flintiness. This construction process is apparent to the viewer and lends the imagery an ethereal quality, very much as if we are imagining the forms rather then seeing them directly. They are quite ‘unphotographic’ as the artist wishes to convey internal mind-states and the accretion of repeated acts

Titles like Symphony of Sorrowful Songs (aptly borrowed from Henryk Górecki’s post-holocaust work), and I don’t feel a thing, chorus those qualities of longing, melancholia and loneliness that she intends.

Her work also entails considerable labour in production aside from the photography, though that is less straightforward; there is much ‘picking up (and) putting down’ done in the studio that is more like that of a sculptor than a photographer. Indeed, veiled sculpted, or should one say wrapped, heads are also included that seem to grow from the ‘earth’ in this constructed, imagined world.

Both artists have worked in manners quite different from those that have emerged from their formal study.

Cameron’s Letter from Portugal is a reminiscent of her previous, more peripatetic work quite different from her current; intimate observations made on travels and residence in various other countries and a series of human encounters, all timelessly recorded in a classic monochrome. 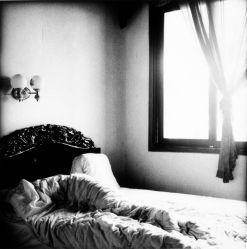 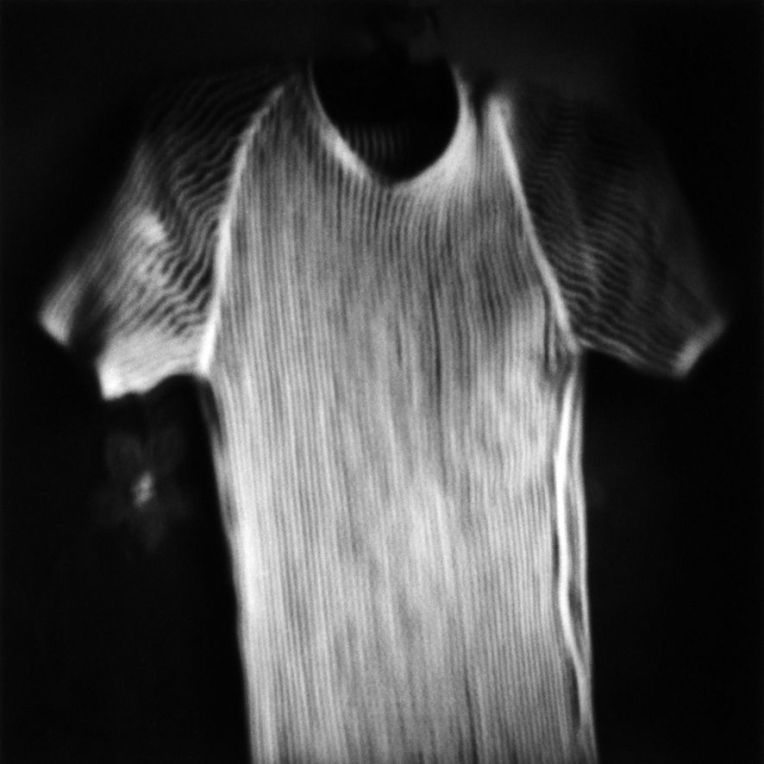 Girardin, around the age of twenty, participated in 2009/10 in the collective unparjour whose “initial premise is to [challenge participating photographers to] publish every day a picture of that day: that effort gives meaning and specificity to the site and made participation a special and lively adventure.”

Her series, dutifully uploaded every day over a passage of 15 months are a record of a mostly fun-filled student life, mostly in Geneva and with excursions to bucolic places around Switzerland. This playfulness is evident in another series which riffs on the tourist habit of ‘touching’ monuments and other ‘sights’ through the old trick of compressed 2D perspective – holding up the Tower at Pisa, lighting one’s cigarette with the tip of the Eiffel Tower, ‘dropping’ I.M. Pei’s pyramid into the forecourt of the Louvre, and so on – shots which later appear ad nauseam on Instagram and elsewhere.

Girardin uses her current opportunity of a scholarship, a six-month artist residency in Paris 1 July 2017 to 30 June 2018, to cleverly send up this tourist-trip trope by simply, with the help of friend Capucine Matti, turning the tables on the tourists.

Much of Girardin’s work continues to be devoted to the human subject; she has undertaken to photograph 100 portraits at the Cité in which in exchange of a bottle of wine or some chocolates, she is getting fellow artist-residents at the Cité Internationale des Arts de Paris to sit for her. Her most penetrating human study, related again to her studies of similarity and difference how long is a banana a banana: mother-daughter, an investigation on similarity, part III made in Poland in 2015, a series of portraits of her mother and herself, exchanging places in otherwise identical settings. In it, her characteristic playfulness is put aside in a boldly candid contemplation of legacy and individuality, resemblance and variance.

Both Cameron and Giardin demonstrate the benefit of daring to make a radical change, to shake off sameness, in one’s approach, and the benefit, for some, of formal study in one’s medium to inspire and enable that.

One thought on “December 2: Sameness”