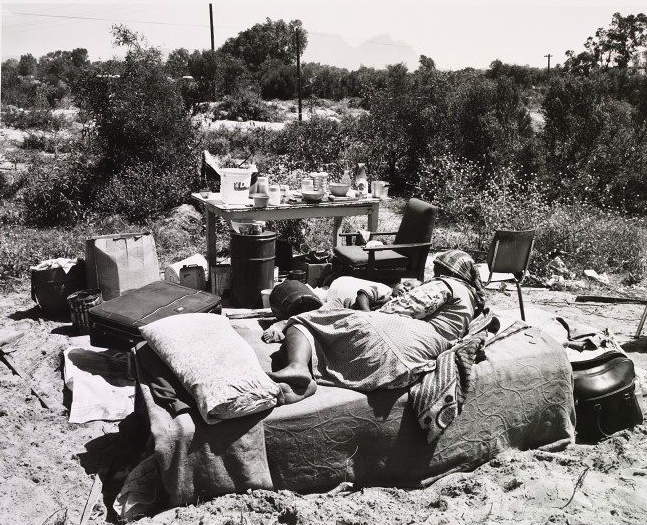 November 29: Photographs of faces often become part of other photographs augmenting them.

Today, in 1930, is the birthdate of South African photographer David Goldblatt (*1930). His output is considerable so here I’ll restrict my post to discussion of his portraits of South Africans in which another photograph (or any other apparent ‘insert’) appears, taking my cue from the effect of ‘picture-in-picture’ that Max Kozloff (*1933) perceptively and entertainingly discussed so long ago in “Photos Within Photos,” in Artforum, February 1976.

The consequence of the penetration of the everyday by this medium is that photographs of faces often become part of other photographs. The phenomenon of the picture-within-a-picture emphasises the capacity of the space of the photograph around the face to signify complex ideas in the genre of the ‘environmental portrait’, a term supposedly coined by Arnold Newman (1918–2006).

Lifetimes: Under Apartheid, is a compilation documenting three decades in South Africa’s divided ̄society by photojournalist David Goldblatt, published in book form in 1986. The book incorporates the In Boksburg exhibition which I vividly remember seeing in 1975 at the National Gallery of Victoria, Australia. It provided a controversial insight into the harsh personal impact of apartheid; racial segregation enforced in law by the National Party (NP) in government from 1948 to 1994.

That this photographer eschewed the ‘action’ shots of breaking news events of the blacks’ struggles, superseding them with a humane inspection of people’s experiences from their perspective, made the work so significant to the outsider. I visited the NGV show as a second-year photography student and it is still one of the most powerful, affecting exhibitions I have ever seen. It was thanks to the unconventional curator of photographer, Australia’s first, Jenni Boddington (1922–2015), who was a filmmaker, that we saw it at all, and it was only Goldblatt’s second solo exhibition (the show had appeared at The Photographers Gallery in London in 1974).

Feelings against apartheid in Australia ran strong; the cricket tour scheduled for the summer of 1971–72 was cancelled when Sir Donald Bradman, Chairman of the Australian Cricket Board, declared there would be no further cricket tours involving South Africa until their teams were chosen on a non-racial basis. Grandstanding of that ilk was somewhat hypocritical given that any potential ‘race problem’ in Australia had been solved in the reduction of our aboriginal population in massacres in the colonial years and ongoing inequality of health care and living conditions since.

Amongst the collection from Lifetimes: Under Apartheid, it can be argued that only a quarter of the sixty images are portraits, but four of Goldblatt’s photographs contain portraits within them.

One photograph holds the other, caught by the camera’s panoptic vision, in parentheses. This co-incidence changes the capacity of both images, and is uniquely photographic.

In Ballroom dancing Teacher Ted Van Rensburg watches two of his pupils swinging to the music of Victor Sylvester and His Orchestra in the old Court House, Boksburg, 1980 the internal image, on its own, framed centrally within Goldblatt’s photograph, presents us with a soldier, Field Marshall General Jan Christian Smuts, who was Prime Minister 1919–1924 and 1939–1948, emblazoned with the symbols of military power.

His is an example of what John Berger holds to be the predominant traditional function of the portrait in Western art, which is evident in the image by Eli Weinberg of Nelson Mandela in tribal regalia as an authority figure. A portrait is a nomination for the praise of powerful men where the most innocent reading of the portrait is that it exists because the importance of the original subject justified it and whose authority it reinforces.

So Ted van Rensburg is not he only person watching middle aged ballroom dancers. His stance seems to echo the authoritarian, condescendingly benevolent gaze of the General on the wall, who in reality is merely a photographic presence and probably unnoticed by the dancers or their teacher.

Through the device of re-photography he comes to occupy the same space/time in the viewers’ eyes. These are people dancing the tune of white supremacy, obeying the constraints of a society based on command and control.

This is the context of one type of the portrait where the portrait equates with political power. The photograph within a photograph codifies a person in relation to other frames of reference and imposes hierarchies of significance. It becomes an icon. 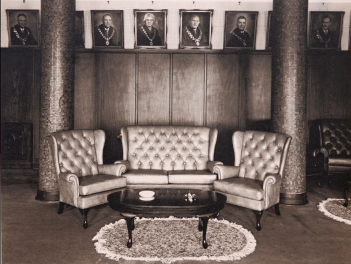 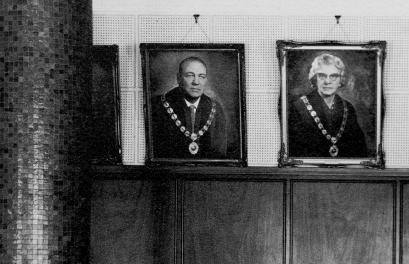 Within the context of the book’s double page spread the scale of political relationships escalates. On the opposite page, in another hall in Boksburg (In the mayor’s parlour, at the Town Hall, Boksburg, 1980) a group of (white) mayors in their robes regards a semicircle of chairs, setting up the unfulfilled anticipation of a subject, an unsettling presence or phantom that pervades the space of Goldblatt’s unpopulated images. 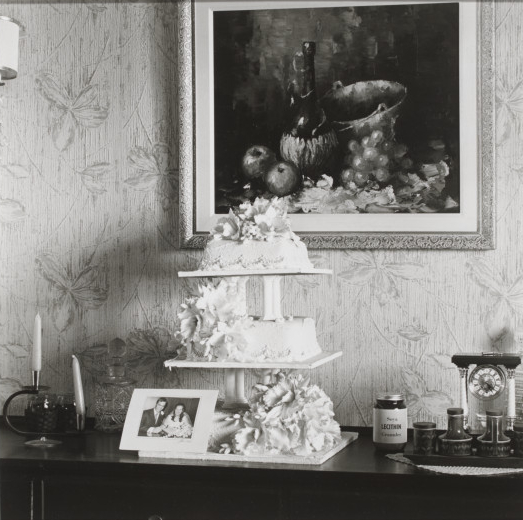 On the sideboard of Dining Room, Randburg, 1974 in this detail is another instance of the photo within a photo. This time the ‘photo within the photograph’ is simply a wedding photograph of a young couple. Resting against the untouched wedding cake, the image here has a condensed ‘factuality’ with connotations of being ‘past’, bringing together two different levels of reality, the photograph captions the still-life. On its own this double portrait is nothing amongst millions of such photos, but in this context, amongst the mundane clutter of the sideboard, amongst this affluent whiteness, it is transfigured. The now mute wedding photograph has become as much an emblem of time as the clock beside it. A portrait can be more than a name. 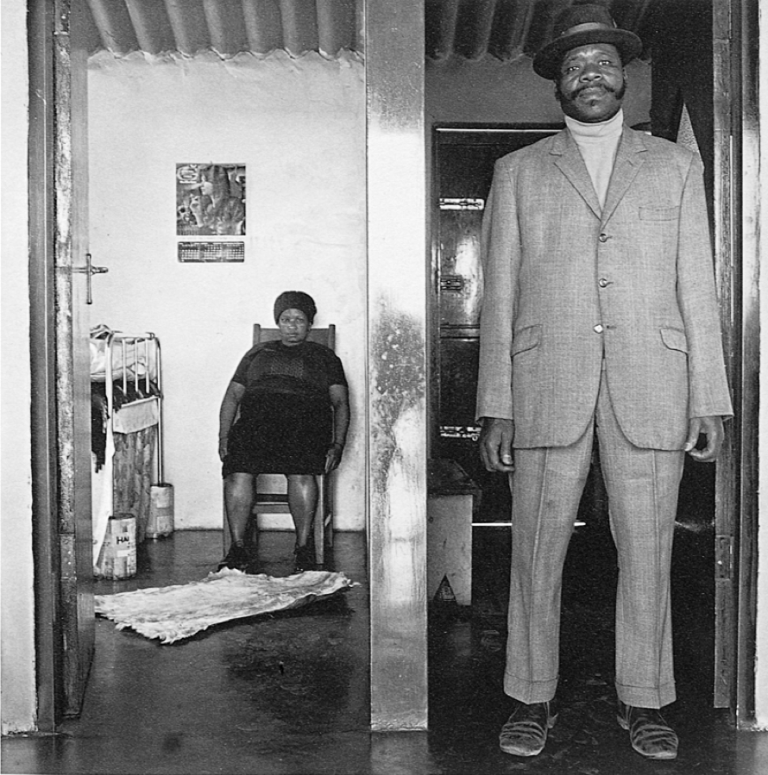 The title of George and Sarah Manyani at home, Emdeni Extension, Soweto, 1972 belies the evidence of invasion that pervades space in which we find this couple. One breach in the defences of this heavily-guarded space (note the water-filled coffee cans around the bed legs, the multiple locks on the back door) is a calendar photograph, perhaps from a tobacco company, in which a young white woman averts her profile from George and Sarah’s existence in their cramped, fastidiously ordered dwelling. It is a space so small that an initial impression is that we are looking at the pendular figures of an old-fashioned novelty weather indicator.

The other presence in this photograph is Goldblatt himself, who becomes a vibrating tenebrous cipher reflected in the gleaming paint work of the end of the partition that separates the two stolid figures. Other heirachies of power are at home here.

This image is a powerful manifestation of the architectural in Goldblatt’s images and relates in its frontality to two early images A barber’s chair of mining timbers, near a compound for black miners, Luipaardsvlei Estate Gold Mines, Krugersdorp, 1965 . The Barber’s Chair is a portrait of a phantom; the object a place where one “constitutes oneself” and is not unlike the device that was used to pose people in the days of the lengthy studio exposure. Goldblatt leaves out the miners he might have photographed here, and its distorted form creates a gestalt that reinforces an inferred human presence, not unlike the ambiguous Picasso cipher-like portraits of his dealers.

The Corner House, head office of a mining corporation, Johannesburg, 1965 is made a sepulchre, framed four-square in Goldblatt’s photograph, cropped short of its heavy neoclassical cornice to elicit a dark browed malevolence in full consciousness of the role of the mining companies at the nadir of apartheid. Compositionally it is the negative of the Barber’s Chair, concave where the chair is solid.

It also continues Goldblatt’s idiom of the symmetrically divided image so powerfully evident in the above scene from the Colgate-Palmolive factory in Boksburg, the town in the eastern sprawl of the greater Johannesburg area where from 1979-80, Goldblatt photographed what he describes as a typical ‘small-town, middle-class, white community’, ‘shaped by white dreams and white proprieties’. The cramped body-language of dust-jacketed worker beside the ‘man-spreading’ white boss underlines the power relationships in an image in which the symmetry is strategically upset.

The spatial disclosure of presence in Goldblatt’s images is significant. The portrait photo inside the photograph is this time inferred through his use of emphatic framing devices such as the doorway that reveals, behind the stoep of the farmer, the other (political) space occupied by the black farm worker.

At other times he reveals that the sense of enclosure or framing is an illusion. In Mother and Child in their home after the destruction of its shelter by Officials of the Western Cape Development Board, Crossroads, Cape Town, 11 October 1984, the architectural form is traced in its evident absence, the very framework of the image is evidence of past and continuing violence against privacy.

Were it not for its political documentary motives, this might be a formalist Modernist concern, not unlike the drawing and redrawing of the boundary between persona and its surrounding void that occupied the life work of Giacometti, instead it manifests the reconsideration of the portrait that occupies much of South African photography. David Goldblatt’s oeuvre does not centre on the conventional portrait, but his publications are fervently subjective. It is a lesson in the way the photographic portrait colonises life, how life, consciousness, in turn infiltrates the image. Contextualisation allows the world and the image to flow together.

The architectonics of Goldblatt’s portraits and his ingenious framing of images within images demonstrates his worth. Against him one might set current photography of his compatriots; the complex, charged photojournalism of Guy Tillim (*1963) environmental portraiture from everyday black lives by the blighted Zwelethu Mthethwa (*1960) or the controversial, politically dubious Candice Breitz (*1972) whose Australian showing I discussed here, to Roger Ballen (*1950) and his grotesqueries, South African photography is still troubled, highly charged and important.

Identity, identification, the photograph and the portrait share restless ground. The ID photograph, like that required to be carried by black South Africans under apartheid, validates identity. To a degree the likeness shares the same identity as the original subject; such extent to which the portrait is identified with the subject means that the portrait carries with it far more of the subject than mere surface appearance.  It is a commonplace to say that we all make of our face a social mask, as a form of protection. In the South Africa of apartheid, identity was in danger, under threat of obliteration. Witness this destruction in Goldblatt’s Fifteen year old youth after release from detention, 1985…