November 16: There is a moment when some photographs suddenly become 3D. Move your head into the right position, level with the vanishing point in the image, close one eye, move closer or back off…and…you are inside the picture, standing just where the photographer stood. Its magic; “almost like being there!”

Carlo Ponti, the one born in Switzerland in 1823 (and not the movie director, but the optician to King Victor Emanuel ll of Italy) loved this effect. He died this day in 1893 only six months after the Kinetoscope was first demonstrated at the Brooklyn Institute of Arts and Sciences in New York on May 9; as Thomas Edison opened his first movie studio, The Black Maria  in New Jersey; and Eadweard Muybridge’ Zoopraxiscope stole the show at his Zoopraxigraphical Hall in the Columbian Exposition at Chicago (1 May 1893 – 30 Oct. 1893). Carlo had lived through the transition from a world without photography right up into a time when pictures began to move.

A photographer himself, Ponti’s adoration of perspective is palpable in his images of architecture. He lived in Venice, renowned for its glorious built environment, full of perfect subject matter for his obsession, from open squares to narrow lanes and waterways, churches and palaces.

Being an optician, he set about building a machine to help others appreciate the illusion  of depth that he loved; the alethoscope, soon improved as the megalethoscope, patented by Ponti in 1861. A massive device, some versions being five feet in length, it was a large and elaborate piece of “optical furniture” for the parlors of the bourgeoisie and produced in various finishes from relatively plain to extremely ornate. It was clearly meant as a status symbol, anticipating the varieties of radio and television cabinet. It had the simple purpose of bringing perspective to life, of restoring the depth effect embedded in the photographic image. David Brewster (1781–1868) had already improved Charles Wheatstone‘s (1802–1875) original stereoscope by adding lenses, and it was much admired by Queen Victoria when it appeared at Britain’s Great Exhibition of 1851, but what was useful about Ponti’s invention was that it simulated the same effect in the single image.

A large lens was housed in the narrower, viewing end of the device, its focus adjusted with handles at the sides. It enlarged the image but also restricted the view so that the spherical perspective effect was best visible. A large albumen print was inserted into an adjustable holder in the wider end that could be rotated for ‘landscape’ or ‘portrait’ format images. Doors with mirrors fixed on their inside could be swung open to maximise illumination of the picture from light available in a day-lit interior or from the fitted kerosine lamp. Alternatively, the print could be illuminated from behind by closing the doors using the lamp or a nearby window. 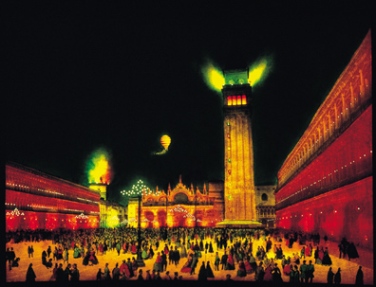 Above is an example of Carlo Ponti’s own coloured albumen print slides for the megaloscope which were sold, with the device itself, in his own outlet in one of the arcades to the right of the Square of St. Marco in Venice in the mid-1800s.

Really, Ponti’s device was an elaborate peep show of the kind that had been shown to children, and adults, at fairs since at least the Renaissance. Peep shows depend for their effect on the viewer using only one eye to look into a confined space in which scenes were painted which were changed as the showman recited and sang the commentary.

Also known as the “Raree Show” the business was obviously based on the economic calculation that almost anything could be made attractive by initially hiding it from view and by suggesting the delights that would be beheld on the production of a coin. The peep show exploited the relative visual poverty of most people’s experience and the “opening of the world” as a result of the voyages of discovery, both geographic and conceptual, of the Enlightenment. The showmen promised the wonders of China, famous palaces, battlegrounds, or the devastation caused by the Lisbon earthquake.

These peep shows also made use of lighting effects and could display a transition of day into night by lighting either the front or rear surface of the image. Lamplights might appear or a  ship burst into flame, and ghosts could be created by painting figures on tissue or gauze and by masking the transparency with black paper or paint on the reverse.

The viewing conditions overcame the crudeness of the perspective renditions.

Narrative could be generated by these temporal changes; this amusing rendition of a microscopic view of drinking water being presented to a frightened old woman by a mischievous boy is another example of front and rear illumination. 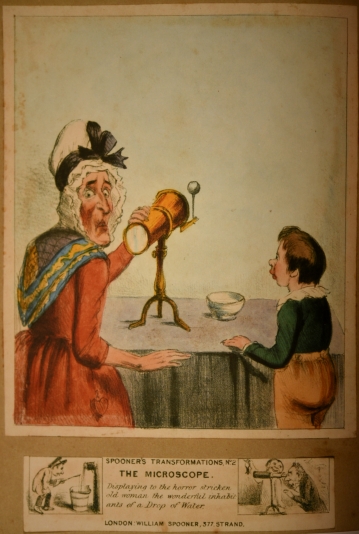 The Microscope, lit from behind.

The attractions of the peep show endured the advent of photography and right into the mid Victorian period and the excitement and modernism spectacle of the Crystal Palace.

It is intriguing to see how readily artists adapted and refined the peep show, especially those of the Dutch ‘Golden Age’:

These survived in the Netherlands as kijkdoos, a toy which children made out of a shoebox with cellophane on the lid and a peephole in one end.

The most revolutionary of these artist ‘peep shows’ was Brunelleschi’s panel showing a painted view of the church of San Giovanni di Firenze, later known as the Florentine Baptistry, as seen from a point about five feet inside the portal of the as yet unfinished cathedral of Florence, Santa Maria del Fiore, across the Piazza del Duomo. According to Brunelleschi’s biographer of the 1480s, Antonio di Tuccio Manetti, in order to constrain the viewer to place his eye at the center of projection, Brunelleschi had made a hole in the panel on which there was this painting;

… which hole was as small as a lentil on the painting side of the panel, and on the back it opened pyramidally, like a woman’s straw hat, to the size of a ducat or a little more. And he wished the eye to be placed at the back, where it was large, by whoever had it to see, with the one hand bringing it close to the eye, and with the other holding a mirror opposite, so that there the painting came to be reflected back; … which on being seen, … it seemed as if the real thing was seen: I have had the painting in my hand and have seen it many times in these days, so I can give testimony.

To hold and rephotograph a film still in front of the view where the picture was taken and to match its perspective is an ongoing art project, FILMography by Canadian photographer Christopher Moloney that matches scenes from movies with their real-life, present-day locations. It is a compelling verification of Brunelleschi’s experiment. 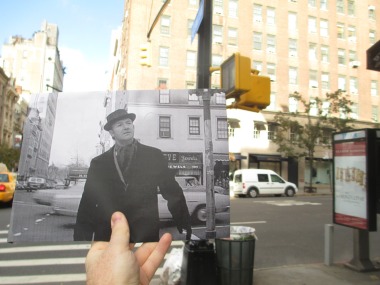 The viewing conditions in a cinema duplicate the concentration on the image and adaptation to its perspective of Ponti’s Megalethoscope, with the addition of movement as an incentive to suspend disbelief.

But German silent movie director Robert Wiene also born this date in 1880 (†1938) abuses perspective in his 1920 film The Cabinet of Dr Caligari with the help of sets by Expressionist painters and stage designers Walter Reimann and Walter Röhrig who painted lighting effects, shadows and tortured, twisting views directly onto the sets.

The corruption of an accepted frame of reference is what makes the film still so disturbingly effective. 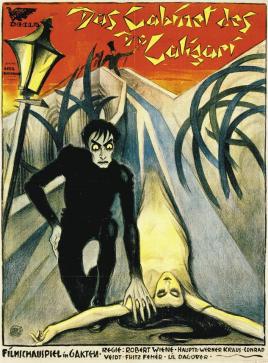 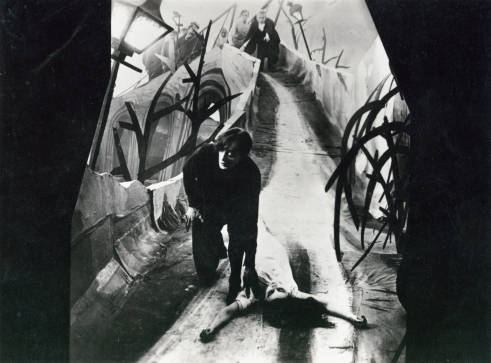 Philosopher Jean Gebser (1905–1973) encapsulated these developments in his 1949 Ursprung und Gegenwart (translated into English as The Ever-Present Origin);

Scarcely five hundred years ago, during the Renaissance, an unmistakable reorganization of our consciousness occurred: the discovery of perspective which opened up the three-dimensionality of space. This discovery is so closely linked with the entire intellectual attitude of the modern epoch that we have felt obliged to call this age the age of perspectivity and characterize the age immediately preceding it as the ‘unperspectival’ age. These definitions, by recognizing a fundamental characteristic of these eras, lead to the further appropriate definition of the age of the dawning new consciousness as the ‘a-perspectival’ age, a definition supported by developments in the visual arts and literature, where the incorporation of time as a fourth dimension into previously spatial conceptions has formed the initial basis for manifesting the ‘new’.

The peep show and the Megalethoscope have evolved and survive today in devices that feed our hunger for spectacle and a desire for a sense of personal presence and ‘virtual’ reality (which is merely an incremental advance on good old ‘realism’) in our movies, video games and interactive immersive 3D headsets, though tellingly, for our jaded and cynical tastes, the motivations of escape and fantasy have displaced curiosity as the driving force.