November 12:  “Is photography art?” is a nagging question constantly raised since the invention of the medium. It’s one that annoys most photographers, who just want to get on and take pictures. However when it’s raised by an artist a reply is provoked.

When Belgian Symbolist painter Fernand Khnopff (who died on this date in 1921) gave a lecture in 1916 at the Académie des Beaux-arts he condemned outright the artistic pretensions of photography, but when he had written his Is Photography among the Fine Arts? In the magazine of art 1899, his question was rhetorical. He quoted others’ responses, but concluded with conflicting answers. There’s a reason for his increasing vehemence; he was hiding something.

Khnopff’s oeuvre includes a large body of nearly monochromatic works on paper. A somewhat limited palette and restrained way of handling his medium become important features of his art, even when he is working in oils. The tendency towards monochromy in his work becomes an essential element in creating the remote and silent atmosphere of the scene.

Another factor in this aspect of his art, however, is the growing need for the photograph as reference, especially in his depictions of the city of Bruges (a kind of Shangi-la to him, a place he had only visited as a child).  If he didn’t visit Bruges as an adult, the only plausible explanation for the accuracy of his later renderings of the town is the use of photography.

In public Khnopff disparaged the artistic merits of this growing medium and throughout his life carefully concealed the role photography played in the creation of some of his paintings. 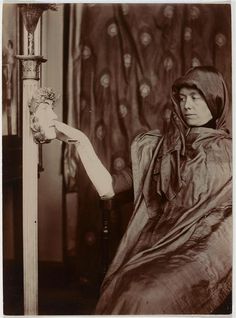 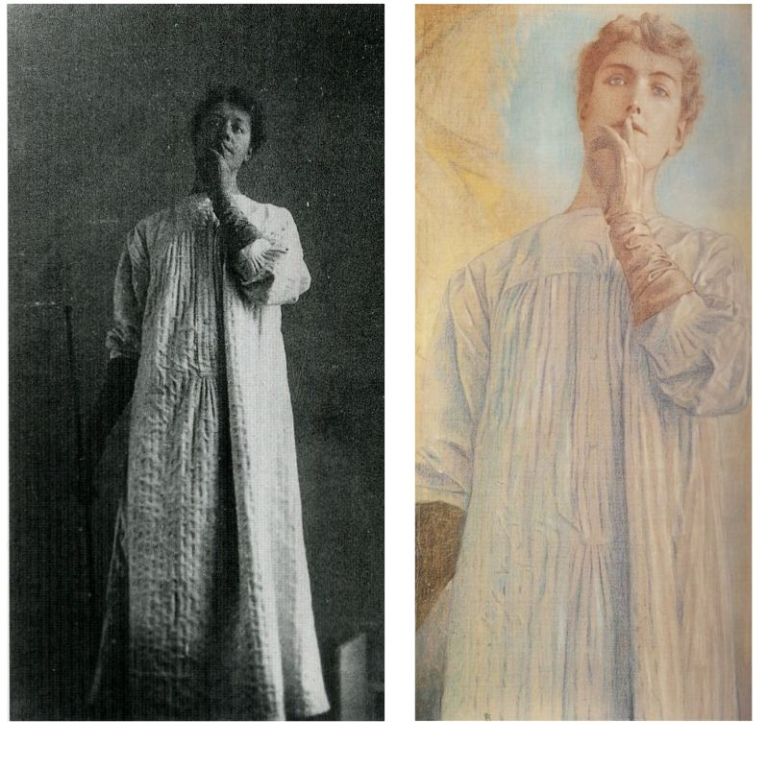 After his death around forty photographs of Marguerite, who was both his sister and his favourite model, were discovered to remain despite her clearance of his studio and the destruction of much of his work and his personal papers. In them, she adopts poses in décor and costumes often alluding to Antiquity and the Far East, but also in dreamy contemporary scenes. It is clear that he was the photographer. Khnopff often did no more than rework the photographed motif in pastel or oil.

He had good reason to maintain his protest against photography. Referring to the paintings shown at Les XX in 188 which included his Portrait of Jeanne Kefer, journalist and art historian Lucien Solvay (1851–1950) had described Khnopff’s works as plagiarisms of the “photo-paintings” of Jan van Beers (1852–1927). He was intentionally provocative; Solvay and Van Beers had crossed swords in the law courts four years earlier when Solvay accused Van Beers of being incapable of painting without the support of photography. Perceptively, Solvay believed he was also encountering this mechanical rendering of the photographic in Khnopff’s work. 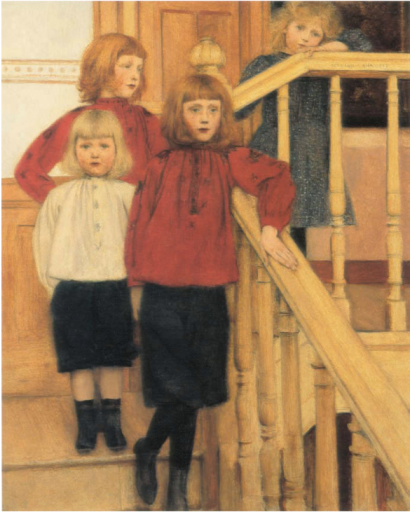 In fact, Khnopff’s photographs are already imbued with mystery and intensity. Like his grey-tone drawings, monochrome photograph also abbreviates and abstracts the image of reality it has captured.

Khnopff’s works based on photographs produced an image removed one more step from reality; remote, dreamlike, rendered in the shades and shadows of near monochrome which are perfect for conveying the ethereal ideas and themes of his art. This theatrical aspect of his photography makes him heir to slightly earlier photographers who were quite close to the Pre-Raphaelites such as Oscar Reijlander, Julia Margaret Cameron, Lewis Carroll and Lady Harwarden.

Interestingly, he concludes his 1899 Is Photography among the Fine Arts? by quoting from La Photographie, Traité Théorique et Pratique (1886) by Louis-Alphonse Davanne (1824–1912), President in 1876 of the Société française de photographie (SFP):

The application of photography to what are called artistic purposes is only one aspect of photography; it has many others not least equally important; and since it does not lend itself to every fancy; it must not be diverted from its own line of work, which is accuracy, authenticity, perfection of detail and truth with beauty. Photography has won such wide recognition in the world that it has every right to be Itself, without attempting to ape anything else. We should be the first to forgive its mistakes and caprices, but it must not sacrifice what ought to be its very essence, its life, its one superiority over any work done by hand – that it, its literal truth.

Ironically, based on the oeuvre he has left behind, we might judge Knopff more photographer than painter, especially in the age of Photoshop, since he was doing no more than ‘retouching’ and reworking his photographs. But was Khnopff an artist?

None of Khnopff’s work is included in the collection of the nine-years-older American coal and steel magnate Henry Clay Frick (1849 – 1919), but understandably because the wealthy industrialist was less interested in contemporary art than in amassing numbers of Old Masters. These included prizes such as three of the rare paintings by Johannes Vermeer, Jean-Honoré Fragonard’s racy The Progress of Love, and the august St. John the Evangelist by Piero della Francesca, as well as items of fine furniture. This loot he housed in his mansion, constructed 1912–1914 in New York city on the site of a bankrupt library facing the east side of Central Park. After his widow Adelaide Frick died in 1931, architect John Russell Pope adapted the building in the early 1930s for use as a public institution.

Today the installation props by Julian Irlinger (*1986 in Erlangen), shown for the first time at Art Basel in Nov/Dec 2016, opens in Studio Ost (Studio East) of the Kunsthalle, Steubenplatz 1, 64293 Darmstadt, Germany, continuing until 7 January 2018.

The work connects directly with the Frick and conceptually to artifice and the relation of photography to art.

Pope’s conversion of the Frick villa’s courtyard entry into the artificially planted Garden Court with its glass ceiling was a key element of the transformation of the villa. Irlinge depicts details of this and other parts of the museum, but does so with images made on a disembodied visit. His cropped views are captured from the Museum’s own virtual tour made with a concern to show off the artwork and that of the Google Cultural Institute. Google’s main concern was to be the market leader in delivering virtual tours, in as many institutions as possible, in the shortest possible time, for the largest audience share. 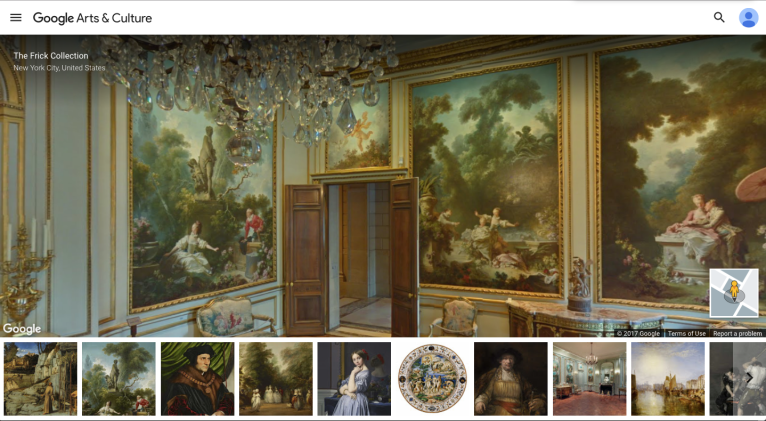 Irlinger combines both separately made immersive representations of the same interiors using lenticular technology. Our view flips between two views in a single frame depending on the angle. In the example above, made from an angle at which both images superimpose, show the columns and walls slightly overlapping, while the plants are out-of-register. 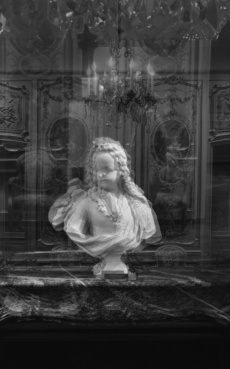 The duplication exposes duplicity; that behind sponsorship and promotion of art, between the disparate corporate, political and economic interests, the institutionalisation of the symbols of power amassed in Frick’s exploitation of coal and steel, and its virtual appropriation by the giant Google. While the work confounds the contradicting connections between money, the public, and art it is also concerned with our own relation to art to which we are given an artificial (virtual) access by such technology that at the same time distances us from it by reducing our attention and encouraging a greedy careless consumption for its own sake.